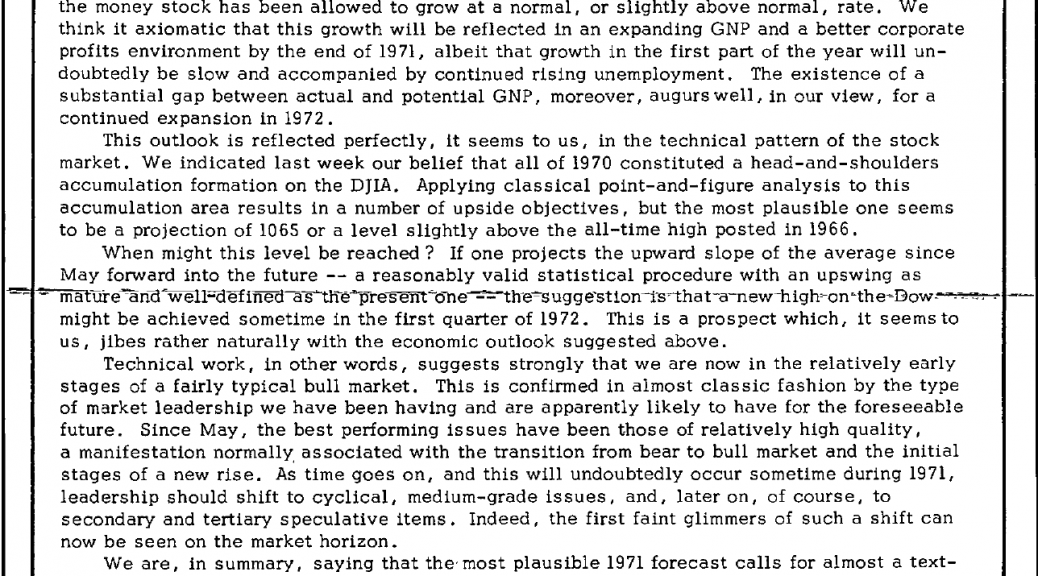 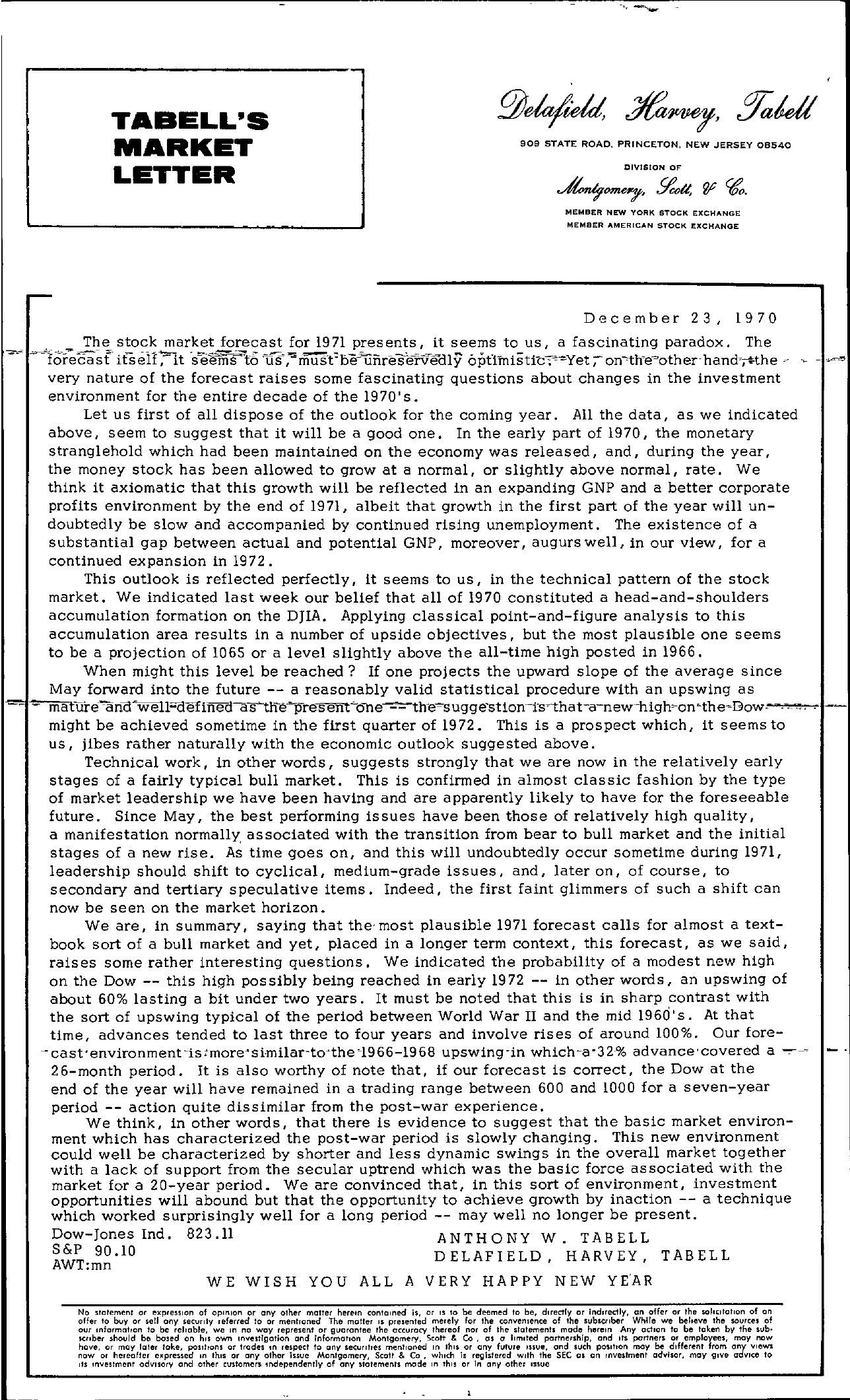 TABELL'S MARKET LETTER 909 STATE ROAD. PRINCETON, NEW JERSEY 08540 DIVISION OF MEMBER NEW YORK STOCK EXCH ….NGE MEMBER AMERICAN STOCK EXCHANGE December 23, 1970 The stock market forecast for 1971 presents, it seems to us, a fascinating paradox. The – itseH;'l.t opfimistic'Yet; hand-,the- very nature of the forecast raises some fascinating questions about changes in the investment environment for the entire decade of the 1970' s. Let us first of all dispose of the outlook for the coming year. All the data, as we indicated above, seem to suggest that it will be a good one. In the early part of 1970, the monetary stranglehold which had been maintained on the economy was released, and, during the year, the money stock has been allowed to grow at a normal, or slightly above normal, rate. We think it axiomatic that this growth will be reflected in an expanding GNP and a better corporate profits environment by the end of 1971, albeit that growth in the first part of the year will un- doubtedly be slow and accompanied by continued rising unemployment. The existence of a substantial gap between actual and potential GNP, moreover, augurs well, in our view, for a continued expansion in 1972. This outlook is reflected perfectly, it seems to us, in the technical pattern of the stock market. We indicated last week our belief that all of 1970 constituted a head-and-shoulders accumulation formation on the DJIA. Applying classical point-and-figure analysis to this accumulation area results in a number of upside objectives, but the most plausible one seems to be a projection of 1065 or a level slightly above the all-time high posted in 1966. When might this level be reached If one projects the upward slope of the average since May forward into the future — a reasonably valid statistical procedure with an upswing as -. – well'defineoastlfe-pres ent 'th might be achieved sometime in the first quarter of 1972. This is a prospect which, it seems to us, jibes rather naturally with the economic outlook suggested above. Technical work, in other words, suggests strongly that we are now in the relatively early stages of a fairly typical bull market. This is confirmed in almost classic fashion by the type of market leadership we have been having and are apparently likely to have for the foreseeable future. Since May, the best performing issues have been those of relatively high quality, a manifestation normally, associated with the transition from bear to bull market and the initial stages of a new rise. As time goes on, and this will undoubtedly occur sometime during 1971, leadership should shift to cyclical, medium-grade issues, and, later on, of course, to secondary and tertiary speculative items. Indeed, the first faint glimmers of such a shift can now be seen on the market horizon. We are, in summary, saying that the- most plausible 1971 forecast calls for almost a text- book sort of a bull market and yet, placed in a longer term context, this forecast, as we said, raises some rather interesting questions. We indicated the probability of a modest new high on the Dow — this high possibly being reached in early 1972 — in other words, an upswing of about 60 lasting a bit under two years. It must be noted that this is in sharp contrast with the sort of upswing typical of the period between World War II and the mid 1960's. At that time, advances tended to last three to four years and involve rises of around 100. Our fore- – cast'environment -is 'more s imilar-tothe '1966-1968 upswing-in which-a3 2- advance'covered a 26-month period. It is also worthy of note that, if our forecast is correct, the Dow at the end of the year will have remained in a trading range between 600 and 1000 for a seven-year period — action quite dissimilar from the post-war experience. We think, in other words, that there is evidence to suggest that the basic market environ- ment which has characterized the post-war period is slowly changing. This new environment could well be characterized by shorter and less dynamic swings in the overall market together with a lack of support from the secular uptrend which was the basic force associated with the market for a 20-year period. We are convinced that, in this sort of environment, investment opportunities will abound but that the opportunity to achieve growth by inaction — a technique which worked surprisingly well for a long period — may well no longer be present. Dow-Jones Ind. 823.11 S&P 90.10 AWTmn ANTHONY W. TAB ELL DELAFIELD, HARVEY, TAB ELL WE WISH YOU ALL A VERY HAPPY NEW YE'AR – ,- No statement or exprCSlon of Opinion or any other mailer herem contolned is, or IS to be deemed to be, directly or Indirectly. an offer or the SOIlCIlolion of on offer to buy or sell any security referred to or menfroned The moiler 15 presented merely for the convenIence of the subWlber Wnlle we believe the sources of our Informalion to be relioble, we m no way represent or guarantee the accuracy thereof nor of the statements mode herem Any adlon to be token by the sub scuber hould be based on hiS own Investigation and Information Montgomery, Scott & Co, as a limited partnership, and Its partners or employees, may now have, or may later toke, pasilions or trades in respect to ony securilies mentioned m thiS or any future Issue, and such pOSlhon may be different from any views now or hereafter expressed m thiS or any other issue Montgomery, Scott & Co, which Is registered With the SEC as on Investment advisor, may give adVice to Its Investment odvlsory and other cusfomef5 independently of any statements made m thiS or In any other Issue