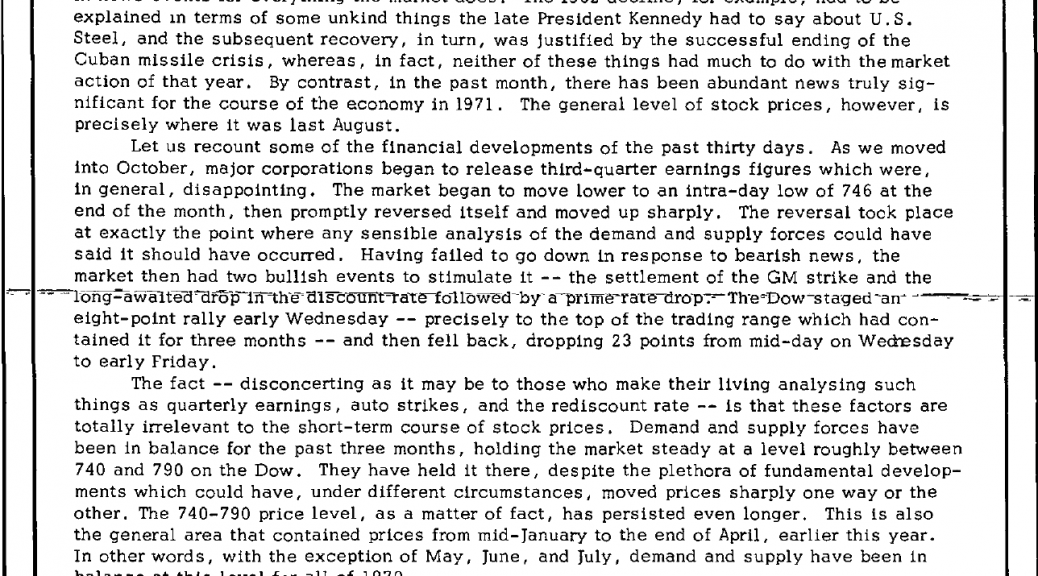 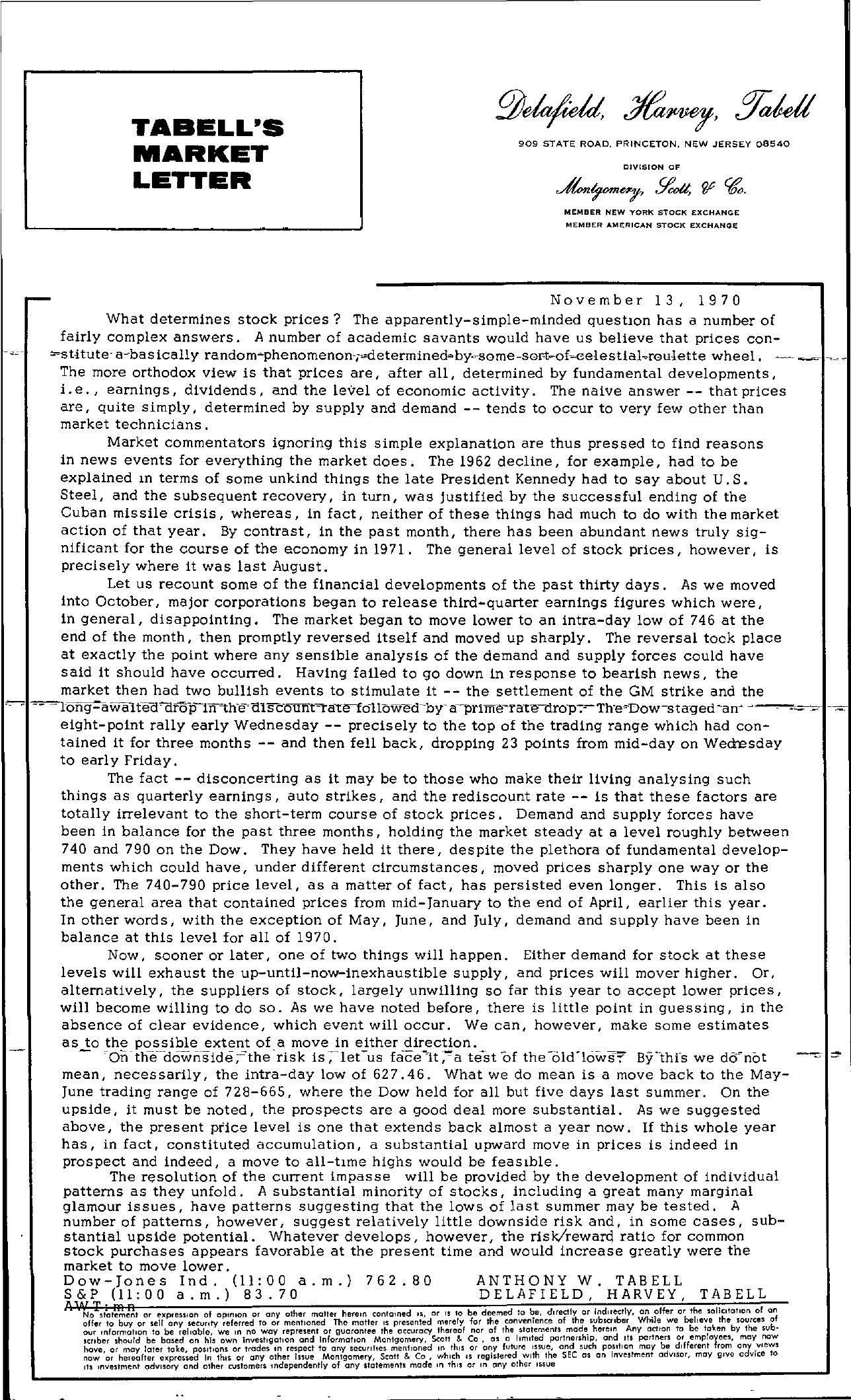 TABELL'S MARKET LETTER 909 STATE ROAD, PRINCETON, NEW JERSEY 08540 DIVISION OF MEMBER NEW YORK STOCK EXCHANGE MEMBER AMERICAN STOCK EXCHANGE – November 13, 1970 What determines stock prices The apparently-simple-minded questIon has a number of fairly complex answers. A number of academic savants would have us believe that prices con- 'stHute- a–basically wheel. – The more orthodox view is that prices are, after all, determined by fundamental developments, i. e., earnings, dividends, and the level of economic activity. The naive answer — that prices are, quite simply, determined by supply and demand — tends to occur to very few other than market technicians. Market commentators ignoring this simple explanation are thus pressed to find reasons in news events for everything the market does. The 1962 decline, for example, had to be explained In terms of some unkind things the late President Kennedy had to say about U. S. Steel, and the subsequent recovery, in turn, was Justified by the successful ending of the Cuban missile criSiS, whereas, in fact, neither of these things had much to do with the market action of that year. By contrast, in the past month, there has been abundant news truly sig- nificant for the course of the economy in 1971. The general level of stock prices, however, is precisely where it was last August. Let us recount some of the finanCial developments of the past thirty days. As we moved into October, major corporations began to release third-quarter earnings figures which were, in general, disappointing. The market began to move lower to an intra-day low of 746 at the end of the month, then promptly reversed itself and moved up sharply. The reversal took place at exactly the point where any sensible analYSis of the demand and supply forces could have said it should have occurred. Having failed to go down in response to bearish news, the market then had two bullish events to stimulate it — the settlement of the GM strike and the –'''Tongawaitea''CIroinrr-th,nl1scounttalef61lowed–by- -an- eight-point rally early Wednesday — preCisely to the top of the trading range which had con- tained it for three months — and then fell back, dropping 23 points from mid-day on Wechlsday to early Friday. The fact — disconcerting as it may be to those who make their living analysing such things as quarterly earnings, auto strikes, and the rediscount rate — is that these factors are totally irrelevant to the short-term course of stock prices. Demand and supply forces have been in balance for the past three months, holding the market steady at a level roughly between 740 and 790 on the Dow. They have held it there, despite the plethora of fundamental develop- ments which could have, under different circumstances, moved prices sharply one way or the other. The 740-790 price level, as a matter of fact, has perSisted even longer. This is also the general area that contained prices from mid- January to the end of April, earlier this year. In other words, with the exception of May, June, and July, demand and supply have been in balance at this level for all of 1970. Now, sooner or later, one of two things will happen. Either demand for stock at these levels will exhaust the up-until-now-inexhaustible supply, and prices will mover higher. Or, alternatively, the suppliers of stock, largely unwilling so far this year to accept lower prices, will become willing to do so. As we have noted before, there is little point in guessing, in the absence of clear evidence, which event will occur. We can, however, make some estimates as to the possible extent of a move in either direction. – -Oidhe-dowiiside;-'the-risk is-;-leCus te-st of By'thfs we do-not mean, necessarily, the intra-day low of 627.46. What we do mean is a move back to the May- June trading range of 728-665, where the Dow held for all but five days last summer. On the upside, it must be noted, the prospects are a good deal more substantial. As we suggested above, the present price level is one that extends back almost a year now. If this whole year has, in fact, constituted accumulation, a substantial upward move in prices is indeed in prospect and indeed, a move to all-hme highs would be feaslble. The resolution of the current impasse will be provided by the development of individual patterns as they unfold. A substantial minority of stocks, including a great many marginal glamour issues, have patterns suggesting that the lows of last summer may be tested. A number of patterns, however, suggest relatively little downside risk and, in some cases, sub- stantial upside potential. Whatever develops, however, the risk/rewarq ratio for common stock purchases appears favorable at the present time and would increase greatly were the market to move lower. Dow-Jones Ind. (1100 a.m.) 762.80 ANTHONYW. TAB ELL S&P (1100 a.m.) 83.70 DELAFIELD, HARVEY, TAB ELL \M T ff1 R . No or eXpre'IOn of opmlon or any other malter herein contamed IS, or 's 10 be deemed to be, directly or Indirectly, an ,offer or the OIlCIIOllon of on offer to buy or sell any security referred to or mentioned The moiler IS presented merely for the convenience of the subSCriber While we believe the sources of our mformatlon to be reliable, we In no w.ay represent or guarantee the accuracy thereof nor of the statements mode. herein Any action to be token by the sub ,cnber should be based on hIs own investigation and Information Montgomery, Scott &. Co, as a limited partnership, and Its partners or employees, may now have, or may later toke, pOSitiOns or trades m respect to any securlhes mentioned In thiS or any future Issue, and such pOSition may be different from ony.vlews now or hereafter expressed In thiS or any other Inue Montgomery, Scott & Co, which IS registered With the SEC as on Investment adVisor, may give adVice to Its Investment adVisory and other customers mdependently of any statements made In thiS or In any other Issue – – –