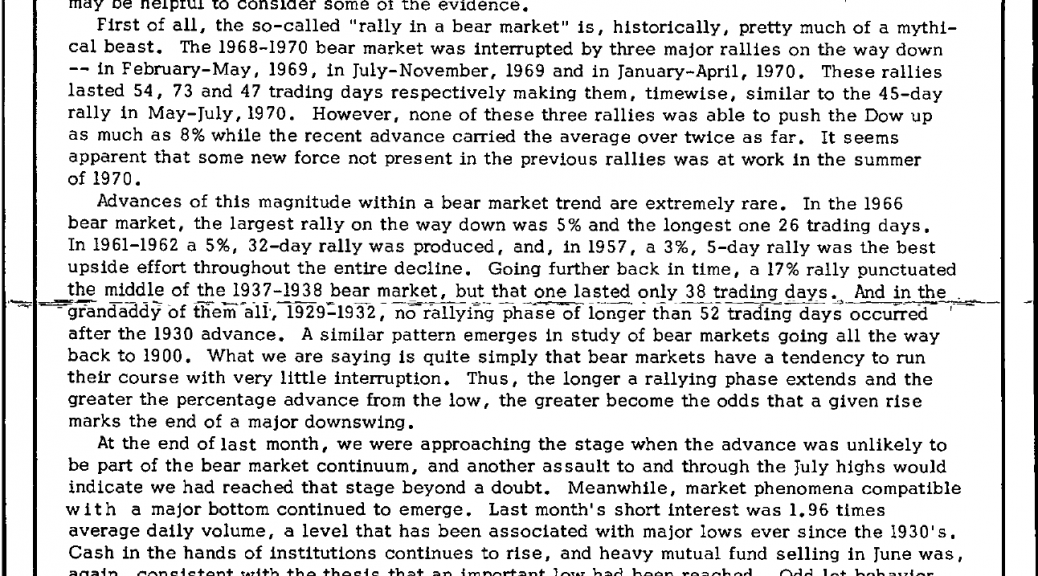 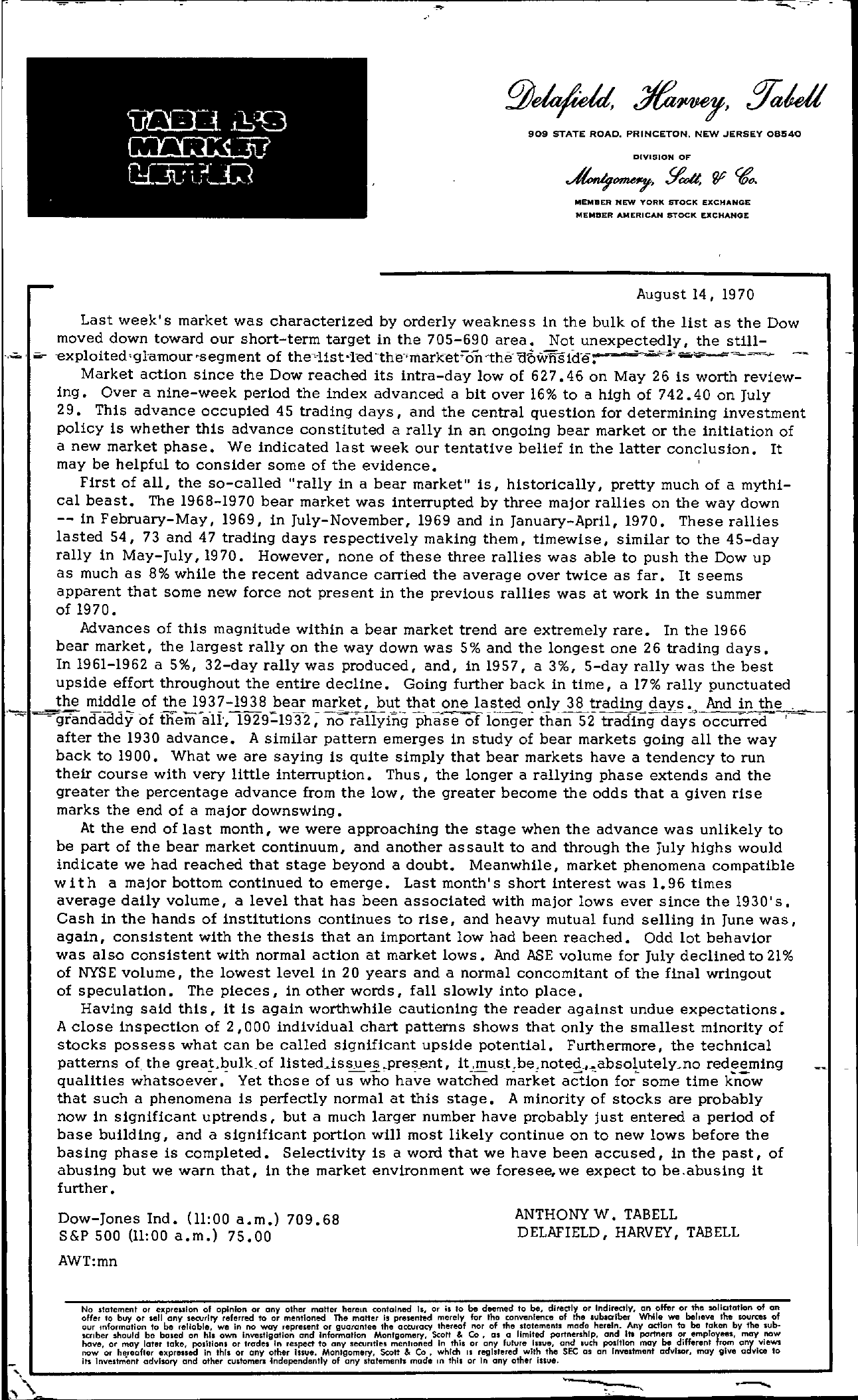 909 STATE ROAD. PRINCETON. NEW JERSEY 08540 DIVISION OF MEMBER NEW YORK STOCK EXCHANGE MEMBER AMERICAN STOCK EXCHANGE August 14, 1970 Last week's market was characterized by orderly weakness in the bulk of the list as the Dow moved down toward our short-term target in the 705-690 area. Not unexpectedly, the still- .,…. ' — 'exploited'glamour-segment of ',,, Market action since the Dow reached its intra-day low of 627.46 on May 26 is worth review- ing. Over a nine-week period the index advanced a bit over 16 to a high of 742.40 on July 29. This advance occupied 45 trading days, and the central question for determining investment policy is whether this advance constituted a rally in an ongoing bear market or the initiation of a new market phase. We indicated last week our tentative belief in the latter conclusion. It may be helpful to conSider some of the evidence. First of all, the so-called rally in a bear market is, historically, pretty much of a mythi- cal beast. The 1968-1970 bear market was interrupted by three major rallies on the way down — in February-May, 1969, in July-November, 1969 and in January-April, 1970. These rallies lasted 54, 73 and 47 trading days respectively making them, timewise, similar to the 45-day rally in May-July, 1970. However, none of these three rallies was able to push the Dow up as much as 8 while the recent advance carried the average over twice as far. It seems apparent that some new force not present in the previous rallies was at work in the summer of 1970. Advances of this magnitude within a bear market trend are extremely rare. In the 1966 bear market, the largest rally on the way down was 5 and the longest one 26 trading days. In 1961-1962 a 5, 32-day rally was produced, and, in 1957, a 3, 5-day rally was the best upside effort throughout the entire decline. Going further back in time, a 17 rally punctuated the middle of the 1937-1938 bear market, but that one lasted only 38 trading days. And in the . – – of them all', 1929-1932,- – — –' – ' – – – – — – nO' rallying phase of longer t-ha- n 52 tradin-g- days- — occurred ' after the 1930 advance. A similar pattern emerges in study of bear markets going all the way back to 1900. What we are saying is quite simply that bear markets have a tendency to run their course with very little interruption. Thus, the longer a rallying phase extends and the greater the percentage advance from the low, the greater become the odds that a given rise marks the end of a major downswing. At the end of last month, we were approaching the stage when the advance was unlikely to be part of the bear market continuum, and another assault to and through the July highs would indicate we had reached that stage beyond a doubt. Meanwhile, market phenomena compatible wit h a major bottom continued to emerge. Last month's short interest was 1. 96 times average daily volume, a level that has been associated with major lows ever since the 1930's. Cash in the hands of institutions continues to rise, and heavy mutual fund selling in June was, again, consistent with the thesis that an important low had been reached. Odd lot behavior was also consistent with normal action at market lows. And ASE volume for July declined to 21 of NYS E volume, the lowest level in 20 years and a normal concomitant of the final wringout of speculation. The pieces, in other words, fall slowly into place. Having said this, it is again worthwhile cautioning the reader against undue expectations. A close inspection of 2,000 indiVidual chart patterns shows that only the smallest minority of stocks possess what can be called significant upside potential. Furthermore, the technical patterns of the great.bulk.of ,pres.ent, it ,mus.t.be.noted.,absolutelyno redeeming qualities ;hatsoever'- Yet those of uS-who have watched market for some time k-now that such a phenomena is perfectly normal at this stage. A minority of stocks are probably now in significant uptrends, but a much larger number have probably just entered a period of base building, and a significant portion will most likely continue on to new lows before the basing phase is completed. Selectivity is a word that we have been accused, in the past, of abusing but we warn that, in the market environment we foresee,we expect to be.abusing it further. Dow-Jones Ind. (1l00 a.m.) 709.68 S&P 500 (1l00 a.m.) 75.00 ANTHONY W. TAB ELL DELAFIELD, HARVEY, TABELL AWTmn No slatement or eo;preulon of opinion or any otner matter herein contained Is, or is to be deemed to be, directly or Indirectly, an offer or the soliCItation of on offer to buy or sell any security referred to or mentioned The matter Is presented merely for the convenience of the lubacrlbet WhIte we believe the sources of our mformotlon to be reliable, we in no WflY represent or guarantee the atturacy thereof nor of the Ifafements mode herein. Any action f1) be taken by the sub- sCflber should be based on his own investigation and Information Montgomery. Scott & Co. as a limited partnership, and Ih partner. O! employees, may now hove or may later ,ake position. or trades In respect to any secunties mentioned In this or ony future I.,ue, and such position may be different from ony views now'or hereofter in thl. or any other Issue. Montgomery. Scott & Co, which IS regblered wllh the SEC as an Investment advisor, may give advice to its Investment adviSOry and other customers of any Ifatemenh made In this or in any other Iswe. ——..—..I