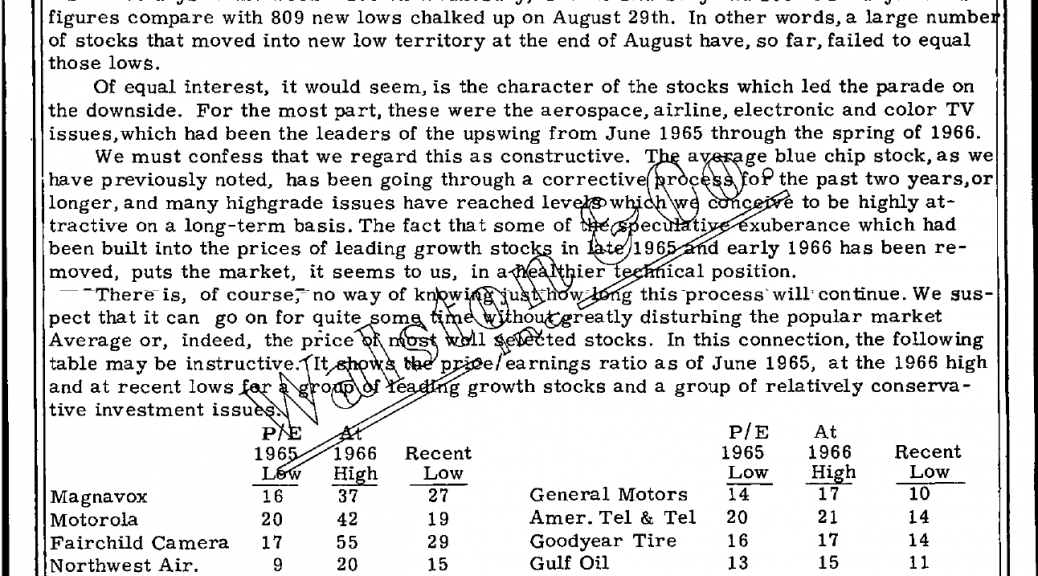 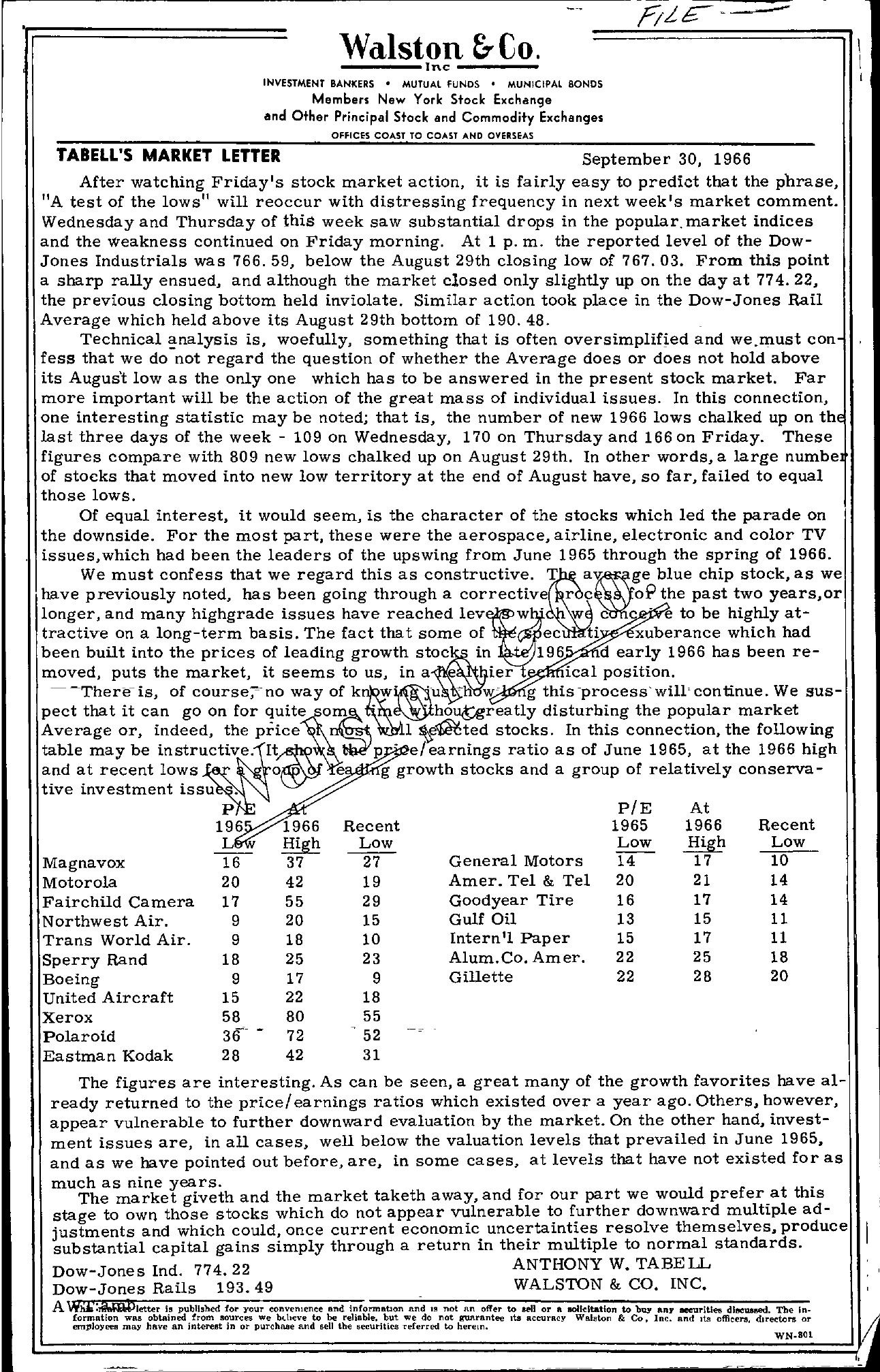 Fi'l.r- -r———————————————————————— – W—-a–l-s–tlonnc–&—-C–o–. INVESTMENT BANKERS MUTUAL FUNDS MUNICIPAL BONDS Members New York Stock Exchange and Other Principal Stock and Commodity Exchange. OFFICES COAST TO COAST AND OVERSEAS TABELL'S MARKET LETTER September 30, 1966 I I I After watching Friday's stock market action, it is fairly easy to predict that the phrase, A test of the lows will reoccur with distressing frequency in next week's market comment. Wednesday and Thursday of this week saw substantial drops in the popular, market indices and the weakness continued on Friday morning. At 1 p. m. the reported level of the Dow- Jones Industrials was 766. 59, below the August 29th closing low of 767.03. From this point a sharp rally ensued, and although the market closed only slightly up on the day at 774.22, the previous closing bottom held inviolate. Similar action took place in the Dow-Jones Rail Average which held above its August 29th bottom of 190.48. Technical is, woefully, something that is often oversimplified and we.must con fess that we do not regard the question of whether the Average does or does not hold above its Augus't low as the only one which has to be answered in the present stock market. Far more important will be the action of the great mass of individual issues. In this connection, one interesting statistic may be noted; that is, the number of new 1966 lows chalked up on th last three days of the week – 109 on Wednesday, 170 on Thursday and 166 on Friday. These figures compare with 809 new lows chalked up on August 29th. In other words, a large numbe of stocks that moved into new low territory at the end of August have, so far, failed to equal those lows. Of equal interest, it would seem, is the character of the stocks which led the parade on the downside. For the most part, these were the aerospace, airline, electronic and color TV issues,which had been the leaders of the upswing from June 1965 through the spring of 1966. We must confess that we regard this as constructive. blue chip stock, as we have previously noted, has been going through a corrective r c oP the past two years, or longer, and many highgrade issues have reached tractive on a long-term basis. The fact that some of Yo! c c e to be highlyatec ti xuberance which had been built into the prices of leading growth s t i i cin 196 dearly 1966 has been re- moved, puts the market, it seems to us, in a ier ical position. –There-is, of course,- no way of we g this'process'will' continue. We sus- pect that it can go on for disturbing the popular market Average or, indeed, the price I stocks. In this connection, the following table may be p . e/ earnings ratio as of June 1965, at the 1966 high and at recent lows 0 e g growth stocks and a group of relatively conserva- tive investment issu . Magnavox P 196 1966 Recent High Low 16 37 27 General Motors pIE 1965 Low 14 At 1966 High 17 Recent Low 10 Motorola Fairchild Camera Northwest Air. Trans World Air. Sperry Rand Boeing 20 17 9 9 18 9 42 55 20 18 25 17 19 29 15 10 23 9 Amer. Tel & Tel 20 21 14 Goodyear Tire 16 17 14 Gulf Oil 13 15 11 Intern'lPaper 15 17 11 Alum.Co. Amer. 22 25 18 Gillette 22 28 20 United Aircraft 15 22 18 Xerox Polaroid 58 80 36' 72 55 52 Eastman Kodak 28 42 31 The figures are interesting. As can be seen, a great many of the growth favorites have al- ready returned to the price/ earnings ratios which existed over a year ago. Others, however, appear vulnerable to further downward evaluation by the market. On the other hand, invest- ment issues are, in all cases, well below the valuation levels that prevailed in June 1965, and as we have pointed out before, are, in some cases, at levels that have not existed for as much as nine years. . The market giveth and the market taketh away, and for our part we would prefer.at thiS stage to own those stocks which do not appear t.o f.urther downward multiple ad- justments and which could, once current economiC uncertamties resolve themselves, produce substantial capital gains simply through a return in their multiple to normal standards. Dow-Jones Ind. 774.22 ANTHONY W. TABELL Dow-Jones Rails 193.49 WALSTON & CO. INC. A Wh11i 1Qftletter is published for your convemence Bnd Information III not an offer to sell or 1\ BOIleltatlon to buy any aeeurlties dlseuued. The in. formation was obtained from sources we bdleve to be reliable. but we do not guarantee Its accuracy Walston & Co. Inc. and Its officers. directors or emJfloyees may have an interest in or purchase and sell the securities referred to herem. WN801