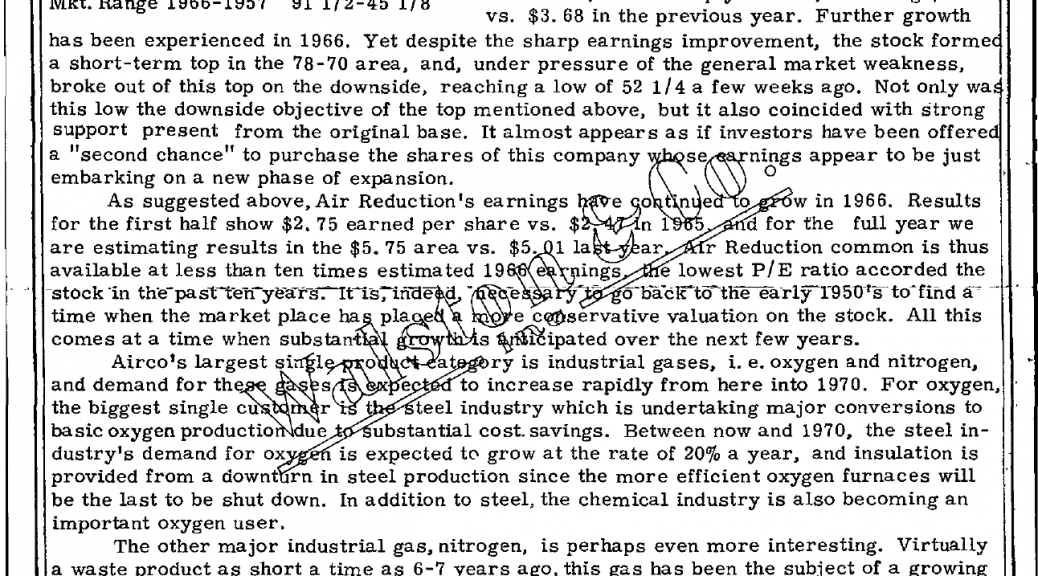 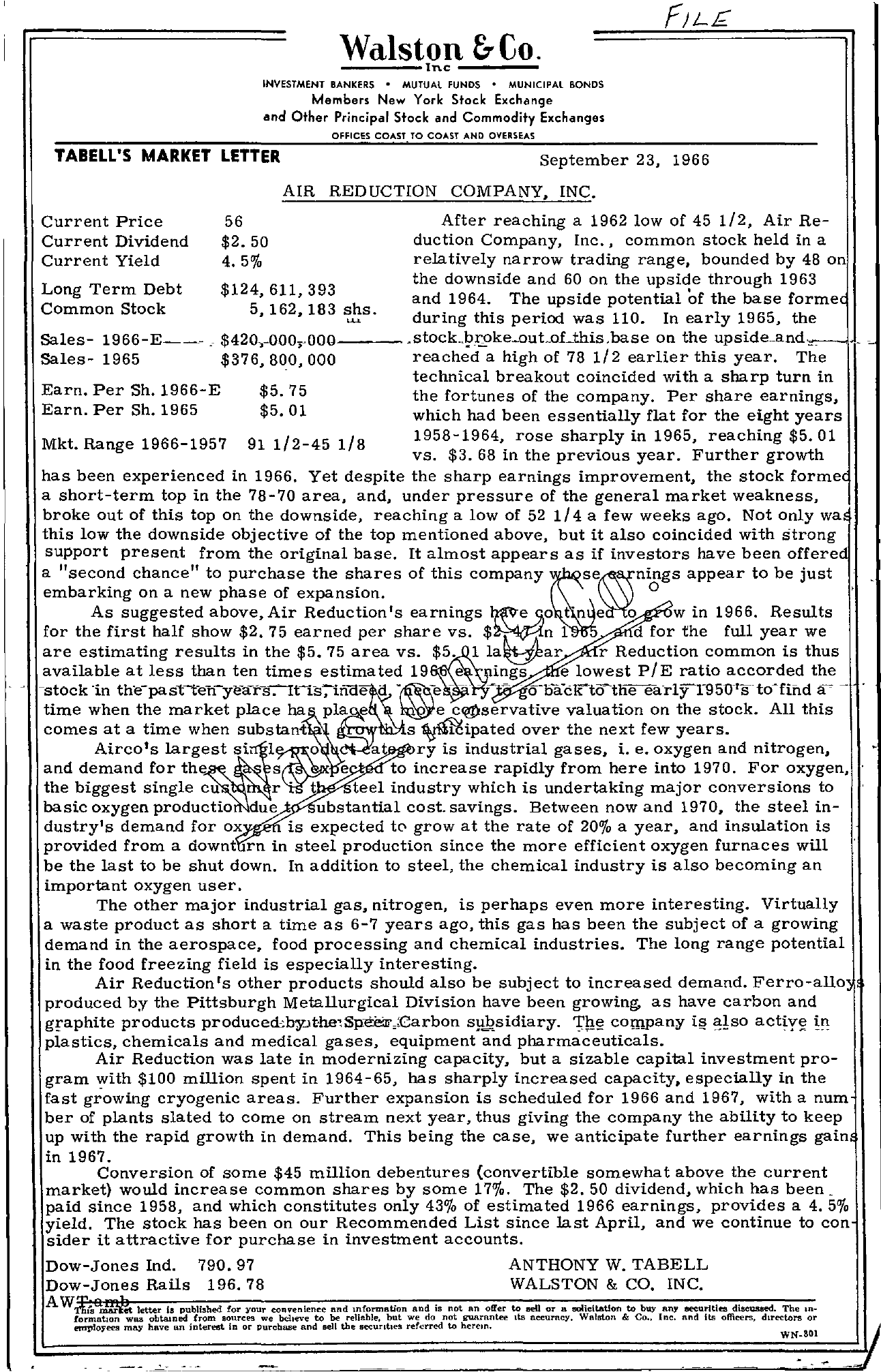 Walston &CO. —-Inc —INVESTMENT BANKERS MUTUAL fUNDS MUNICIPAL BONDS Members New York Stock Exchange and Other Principal Stock and Commodity Exchanges OFFICES COAST TO COAST AND OVERSEAS TABELL'S MARKET LETTER September 23, 1966 AIR REDUCTION COMPANY, INC. Current Price Current Dividend Current Yield Long Term Debt Common Stock 56 2.50 4.5 124, 611, 393 5,162,183 shs. .u After reaching a 1962 low of 45 1/2, Air Re- duction Company, Inc., common stock held in a relatively narrow trading range, bounded by 48 on the and d1o9w64n.sidTehaendup6s0idoenptohteenutpiasildoef through 1963 the base forme during this period was 110. In early 1965, the Sales- 1966-E—, 420,.000,000— ,stock,.br9keouLoLthis,base on the upside-and'-11 Sales- 1965 376,800, 000 high of 78 1/2 earlier this year. The Earn. Per Sh. 1966-E 5.75 technical breakout coincided with a sharp turn in the fortunes of the company. Per share earnings, Earn. Per Sh. 1965 5.01 which had been essentially flat for the eight years Mkt. Range 1966-1957 91 1/2-45 1/8 1958-1964, rose sharply in 1965, reaching 5.01 vs. 3.68 in the previous year. Further growth has been experienced in 1966. Yet despite the sharp earnings improvement, the stock forme a short-term top in the 78-70 area, and, under pressure of the general market weakness, broke out of this top on the downside, reaching a low of 52 1/4 a few weeks ago. Not only wa this low the downside objective of the top mentioned above, but it also coincided with strong support present from the original base. It almost appears as if investors have been offere a second chance to purchase the shares of this company embarking on a new phase of expansion. appear to be just 0 As suggested above,Air Reduction's earnings for the first half show 2.75 earned per share vs. 9,0 t'n e 0 win 1966. Results 1 a for the full year we are estimating results in the 5.75 area vs. r Reduction common is thus available at less than ten times estimated e lowest PiE ratio accorded the comes at a time when substant over the next few years. Airco's largest s1. at ry is industrial gases, i. e. oxygen and nitrogen, and demand for the s e to increase rapidly from here into 1970. For oxygen, the biggest single cu r' t teel industry which is undertaking major conversions to basic oxygen productio due ubstantial cost, savings. Between now and 1970, the steel in- dustry's demand for ox is expected tC' grow at the rate of 20 a year, and insulation is provided from a downt rn in steel production since the more efficient oxygen furnaces will be the last to be shut down. In addition to steel, the chemical industry is also becoming an important oxygen user. The other major industrial gas, nitrogen, is perhaps even more interesting. Virtually a waste product as short a time as 6-7 years ago, this gas has been the subject of a growing demand in the aerospace, food processing and chemical industries. The long range potential in the food freezing field is especially interesting. Air Reduction IS other products should also be subject to increased demand. Ferro-allo produced by the Pittsburgh Metallurgical Division have been growing, as have carbon and graphite products company i a!so plastics, chemicals and medical gases, equipment and pharmaceuticals. Air Reduction was late in modernizing capacity, but a sizable capital investment pro- gram with 100 million spent in 1964-65, has sharply increased capacity, especially in the fast growing cryogenic areas. Further expansion is scheduled for 1966 and 1967, with anum ber of plants slated to come on stream next year, thus giving the company the ability to keep up with the rapid growth in demand. This being the case, we anticipate further earnings gain in 1967. Conversion of some 45 million debentures (convertible somewhat above the current market) would increase common shares by some 17. The 2. 50 dividend, which has been. paid since 1958, and which constitutes only 43 of estimated 1966 earnings, provides a 4.5 yield. The stock has been on our Recommended List since last April, and we continue to con sider it attractive for purchase in investment accounts. Dow-Jones Ind. 790.97 Dow-Jones Rails 196.78 ANTHONY W. TABELL WALSTON & CO. INC. A W (8 m&r et letter is published for your convenlent'e and mformation and is not an offer to seD or a solicitAtion to buy any seeuriUes diseussed. The In lormatlOn WIlS obtamed (rom Bources we believe to be reliable, but we do not guarantee Its aeeuracy. Walston & Co.. Inc. and its offict!rs, directors or emt'loyees may have an interest in or Purchase and oell the oecunbes referred to bereln. WNSOI … -' ….-