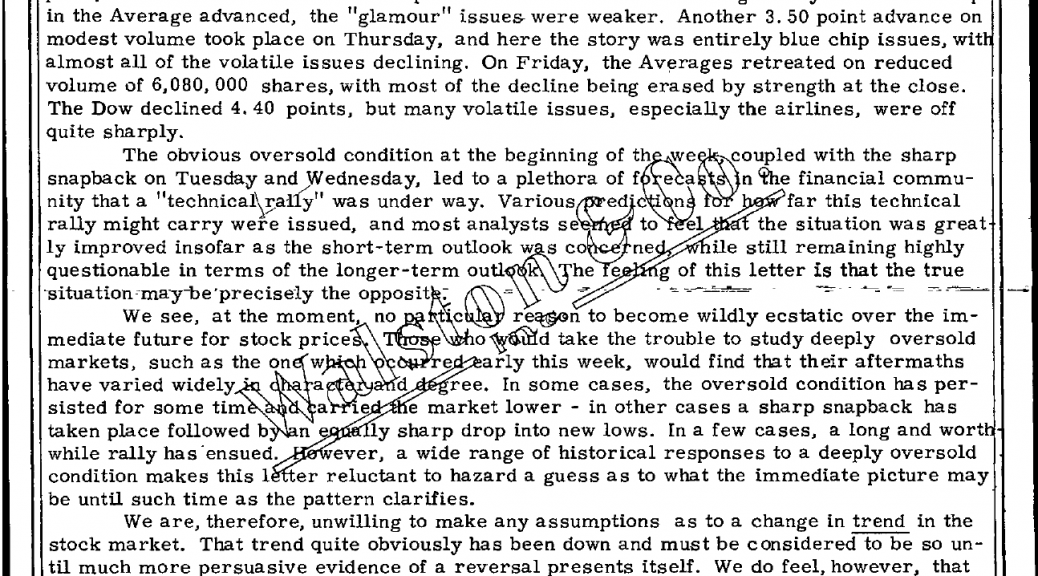 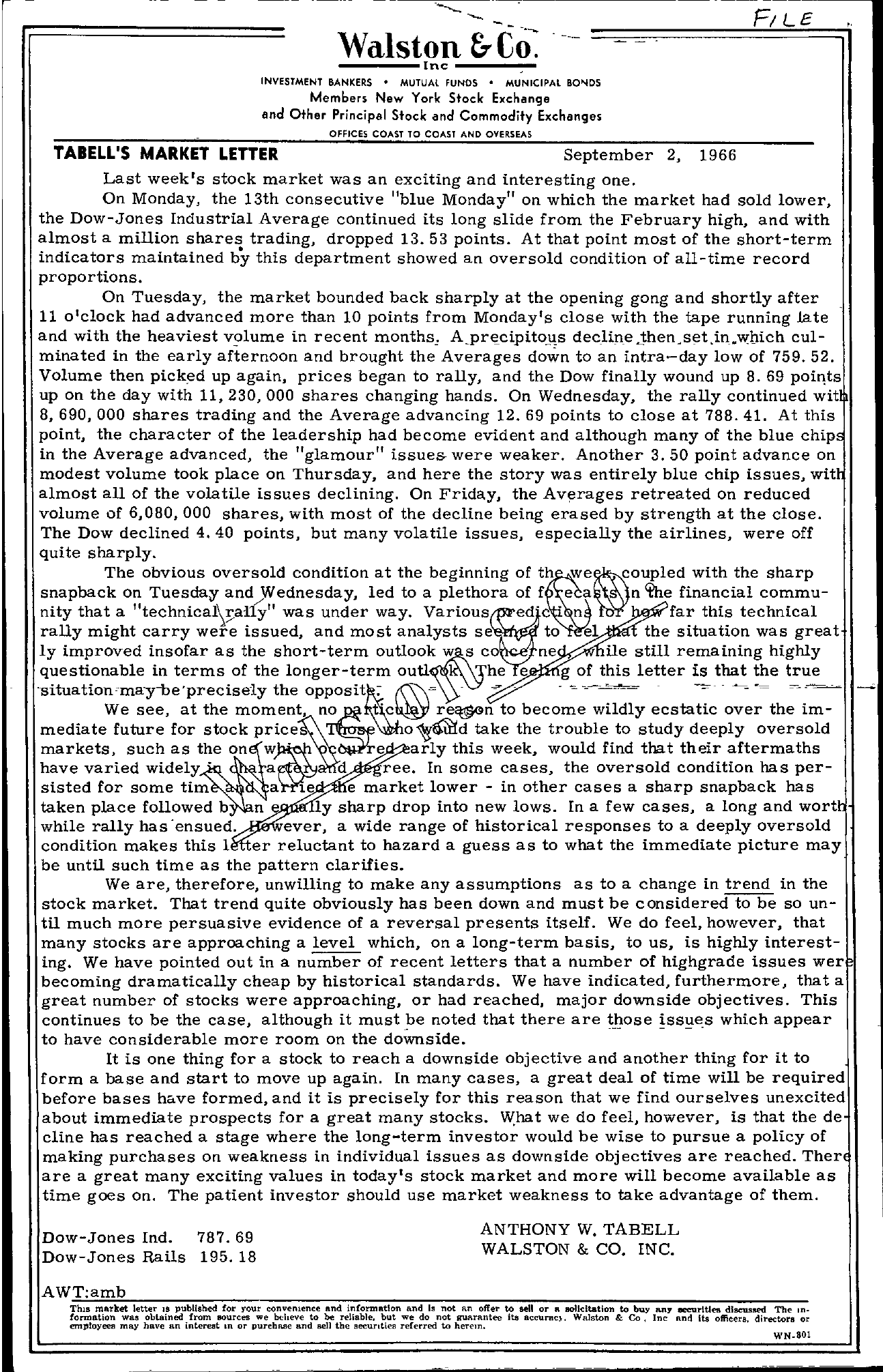 —- — — – – – – – – – – – – – Walston Inc ——— – —- FILE INVESTMENT BANKERS MUTUAL FUNDS MUNICIPAL BOlDS Members New York Stock Exchange and Other Principal Stock and Commodity Exchanges OFFICES COAST TO COAST AND OVERSEAS TABELL'S MARKET LETTER September 2, 1966 Last week's stock market was an exciting and interesting one. On Monday, the 13th consecutive blue Monday on which the market had sold lower, the Dow-Jones Industrial Average continued its long slide from the February high, and with almost a indicator smmillaiionntasinheadrebsyttrhadisindge,padrrtomppenedt 13.53 points. showed an ove At that point most of the short-ter rsold condition of all-time record m proportions. On Tuesday, the market bounded back sharply at the opening gong and shortly after 11 o'clock had advanced more than 10 points from Monday's close with the tape running .late and with the heaviest volume in recent months, declineJhenset5n.wl1ich cul- minated in the early afternoon and brought the Averages down to an intra-day low of 759.52. Volume then picked up again, prices began to rally, and the Dow finally wound up 8. 69 poif\ts up on the day with 11,230,000 shares changing hands. On Wednesday, the rally continued wit 8,690,000 shares trading and the Average advancing 12.69 pOints to close at 788.41. At this point, the character of the leadership had become evident and although many of the blue chip in the Average advanced, the glamour issue& were weaker. Another 3.50 point advance on modest volume took place on Thursday, and here the story was entirely blue chip issues, wit almost all of the volatile issues declining. On Friday, the Averages retreated on reduced volume of 6,080,000 shares, with most of the decline being erased by strength at the close. The Dow declined 4.40 pOints, but many volatile issues, especially the airlines, were off quite sharply. The obvious oversold condition at the beginning of with the sharp snapback on Tuesday and Wednesday, led to a plethora of f e a n 'fue financial commu- nity that a was under way. i n far this technical rally might carry were issued, and most analysts se to el the situation was great ly improved insofar as the short-term outlook w s co ne ile still remaining highly in terms.of the Sltuatlon-may-be'preclsely the -'e letter is that , – – —- – — —– We see, at the moment, no to become wildly ecstatic over the im- mediate future for stock take the trouble to study deeply oversold markets, such as on have varied widely' a arly this week, would find that their aftermaths d ree. In some cases, the oversold condition has per- sisted for some tim a Ie e market lower – in other cases a sharp snapback has taken place followed b n ly sharp drop into new lows. In a few cases, a long and wort while rally has 'ensued. ever, a wide range of historical responses to a deeply oversold condition makes this I er reluctant to hazard a guess as to what the immediate picture may be until such time as the pattern clarifies. We are, therefore, unwilling to make any assumptions as to a change in trend in the stock market. That trend quite obviously has been down and must be considered to be so un- til much more persuasive evidence of a reversal presents itself. We do feel, however, that many stocks are approaching a level which, on a long-term basis, to us, is highly interest- ing. We have pointed out in a number of recent letters that a number of highgrade issues wer becoming dramatically cheap by historical standards. We have indicated, furthermore, that a great number of stocks were approaching, or had reached, major downside objectives. This continues to be the case, although it muste noted that there are t.1J.ose which appear to have considerable more room on the downside. It is one thing for a stock to reach a downside objective and another thing for it to form a base and start to move up again. In many cases, a great deal of time will be required before bases hove formed, and it is precisely for this reason that we find ourselves unexcited about immediate prospects for a great many stocks. What we do feel, however, is that the de cline has reached a stage where the long-term investor would be wise to pursue a policy of making purchases on weakness in individual issues as downside objectives are reached. Ther are a great many exciting values in today's stock market and more will become available as time goes on. The patient investor should use market weakness to take advantage of them. Dow-Jones Ind. 787.69 Dow-Jones Rails 195.18 ANTHONY W. TABELL WALSTON & CO. INC. AWTamb ThIS market letter IS published for your convemence and information and Is not lUI offer to setl or a aoIldtatlon to buy an,. eeeurttte& discussed The In. formation was obtained from sources we bt'heve to be reliable, but we do not guarantee its BCCUraC. Walston & Co, Inc and its officers directors or emJ'loyees may have an interest In or purehlUle and sell the securities referred to herem. . WNSOI