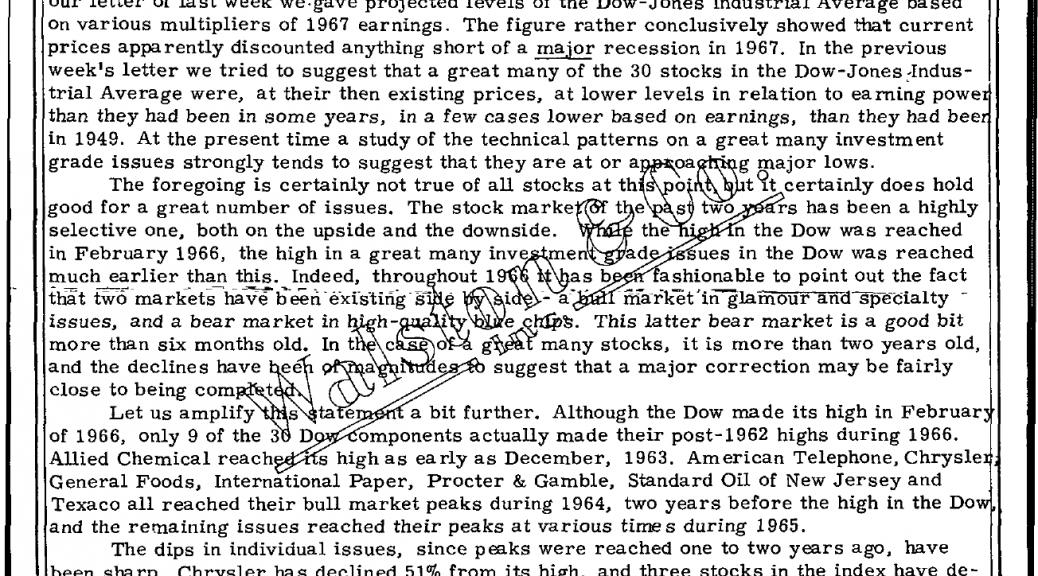 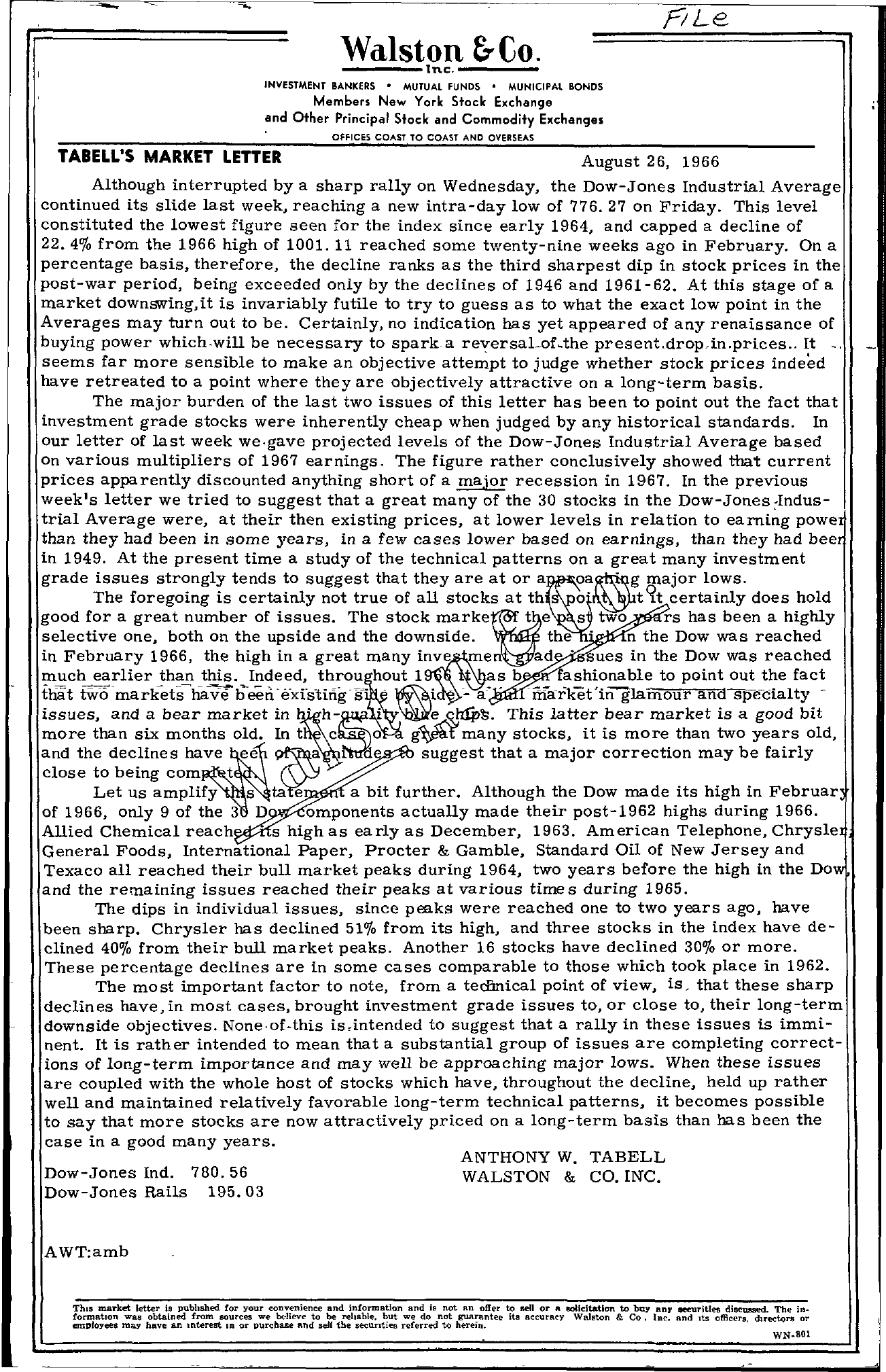 ALe W—-a–l–s-tIoncn.–&—C–o–. INVESTMENT BANKERS MUTUAL FUNDS MUNICIPAL BONDS Members New York Stock Exchange and Other Principal Stock and Commodity Exchanges TABELL'S MARKET LETTER OFfiCES COAST TO COAST AND OVERSEAS August 26, 1966 Although interrupted by a sharp rally on Wednesday, the Dow-Jones Industrial Average continued its slide last week, reaching a new intra-day low of 776.27 on Friday. This level constituted the lowest figure seen for the index since early 1964, and capped a decline of 22.4 from the 1966 high of 1001. 11 reached some twenty-nine weeks ago in February. On a percentage basis, therefore, the decline ranks as the third sharpest dip in stock prices in the post-war period, being exceeded only by the declines of 1946 and 1961-62. At this stage of a market downswing,it is invariably futile to try to guess as to what the exact low pOint in the Averages may turn out to be. Certainly, no indication has yet appeared of any renaissance of buying power which.will be necessary to spark a reversaLof.the present,drop.in.prices .. It . seems far more sensible to make an objective to judge whether stock prices indeed have retreated to a point where they are objectively attractive on a long-term basis. The major burden of the last two issues of this letter has been to point out the fact that investment grade stocks were inherently cheap when judged by any historical standards. In our letter of last week we.gave projected levels of the Dow-Jones Industrial Average based On various multipliers of 1967 earnings. The figure rather conclusively showed that current prices apparently discounted anything short of a major recession in 1967. In the previous week's letter we tried to suggest that a great many of the 30 stocks in the Dow-Jones Indus- trial Average were, at their then existing prices, at lower levels in relation to earning powe than they had been in some years, in a few cases lower based on earnings, than they had bee in 1949. At the present time a study of the technical patterns on a great many investment grade issues strongly tends to suggest that they are at or major lows. The foregoing is certainly not true of all stocks at th certainly does hold good for a great number of issues. The stock markeBe s two rs has been a highly selective one, both on the upside and the downside. the' n the Dow was reached in February 1966, the high in a great many men ad' sues in the Dow was reached t.trOllfiJhout 1 . . ' b to point that two markets have been eXlshng s – a marKet lIT glamour ana speclalty issues, and a bear market h-S i This latter bear market is a good bit more than six months old. In t c 0 many stocks, it is more than two years old, and the declines ee l e suggest that a major correction may be fairly close to being com t Let us amplify s ta e a bit further. Although the Dow made its high in Februar of 1966, only 9 of the 3 D omponents actually made their post-1962 highs during 1966. Allied Chemical reach s high as early as December, 1963. American Telephone, Chrysle General Foods, International Paper, Procter & Gamble, Standard Oil of New Jersey and Texaco all reached their bull market peaks during 1964, two years before the high in the Do and the remaining issues reached their peaks at various times during 1965. The dips in individual issues, since peaks were reached one to two years ago, have been sharp. Chrysler has declined 510/0 from its high, and three stocks in the index have de- clined 400/0 from their bull market peaks. Another 16 stocks have declined 300/0 or more. These percentage declines are in some cases comparable to those which took place in 1962. The most important factor to note, from a tedinical point of view, is. that these sharp declines have, in most cases, brought investment grade issues to, or close to, their long-term downside objectives. Noneofthis is.intended to suggest that a rally in these issues is immi- nent. It is rather intended to mean that a substantial group of issues are completing correct- ions of long-term importance and may well be approaching major lows. When these issues are coupled with the whole host of stocks which have, throughout the decline, held up rather well and maintained relatively favorable long-term technical patterns, it becomes possible to say that more stocks are now attractively priced on a long-term basis than has been the case in a good many years. Dow-Jones Ind. 780.56 Dow-Jones Rails 195.03 ANTHONY W. TABELL WALSTON & CO. INC. AWTamb This market letter is published for your eonvenienee and information and ill not I\n offer to Bell or tI. i8OIkltatlon to buy any eeeurities dlseussed. The in- formation was obtained from sources we believe to be reliable. but we do not guarantee its aeeuraey Walston & Co, Ine. and lts offieers du'edors 01' employees may have an Interest In or purebase and sell the seeunties referred to herein, ' WNSOl