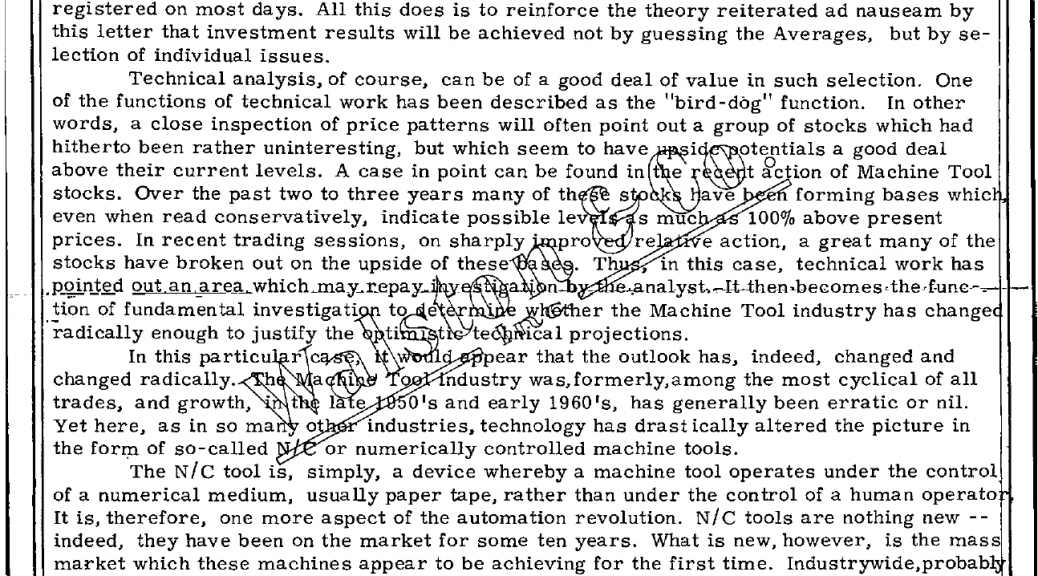 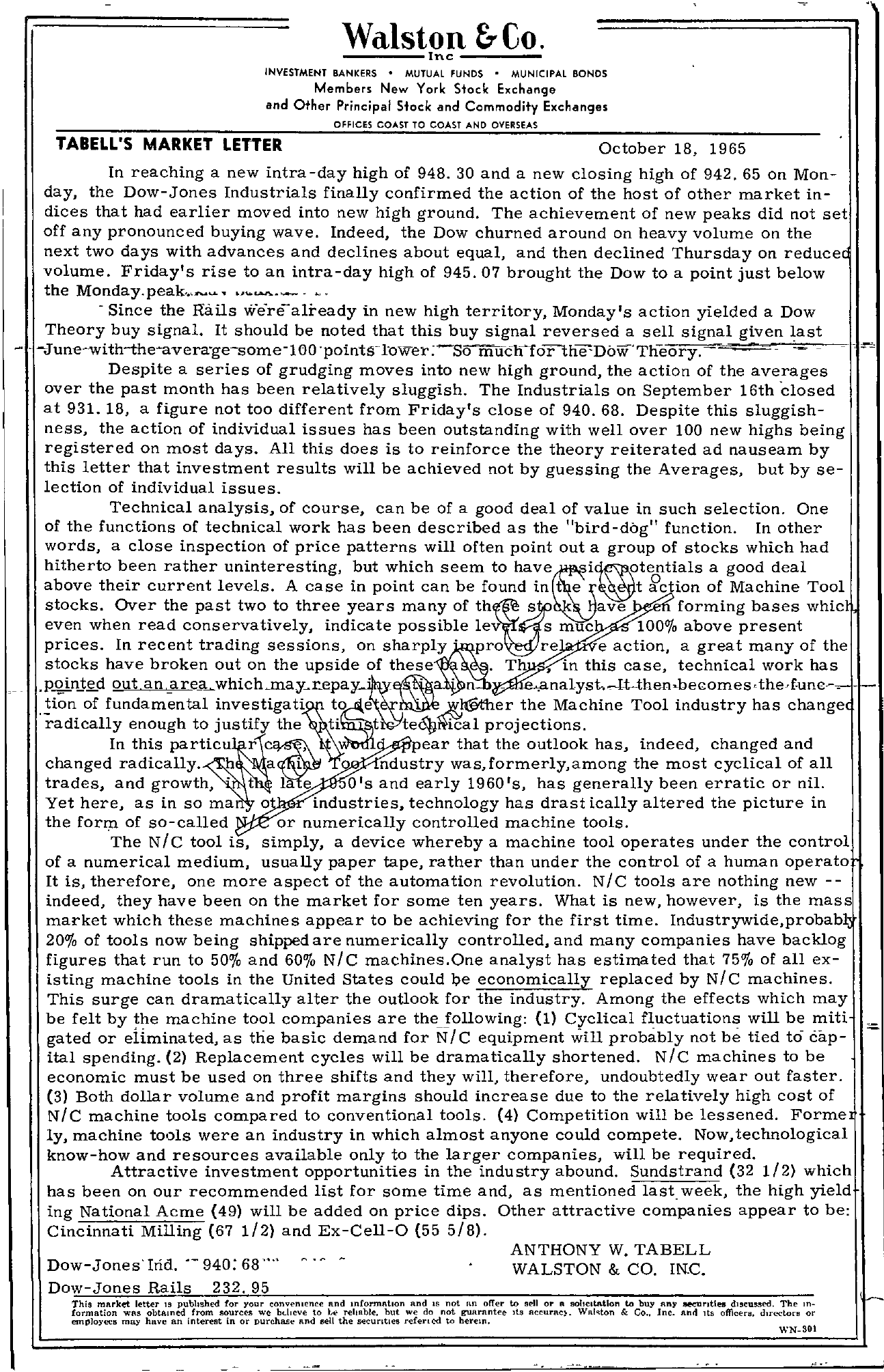 W—-a–l-s-tIoncn–&—-C–o-. INVESTMENT BANKERS MUTUAL FUNDS MUNICIPAL BONDS Members New York Stock Exchange and Other Principal Stock and Commodity Exchanges TABEll'S MARKET lETTER OFFICES COAST TO COAST AND OVERSEAS October 18, 1965 In reaching a new intra-day high of 948.30 and a new closing high of 942. 65 on Mon- day, the Dow-Jones Industrials finally confirmed the action of the host of other market in- dices that had earlier moved into new high ground. The achievement of new peaks did not set off any pronounced buying wave. Indeed, the Dow churned around on heavy volume on the next two days with advances and declines about equal, and then declined Thursday on reduce volume. Friday's rise to an intra-day high of 945.07 brought the Dow to a point just below the – . Since the Rails w'ere-already in new high territory, Monday's action yielded a Dow Theory buy signal. It should be noted that this buy signal reversed a sell signal given last -. 'points-lower tlieDow'Theory. – – – Despite a series of grudging moves into new high ground, the action of the averages over the past month has been relatively sluggish. The Industrials on September 16th closed at 931. 18, a figure not too different from Friday's close of 940. 68. Despite this sluggish- ness, the action of individual issues has been outstanding with well over 100 new highs being registered on most days. All this does is to reinforce the theory reiterated ad nauseam by this letter that investment results will be achieved not by guessing the Averages, but by se- lection of individual issues. Technical analysis, of course, can be of a good deal of value in such selection. One of the functions of technical work has been described as the bird-dog function. In other words, a close inspection of price patterns will often point out a group of stocks which had hitherto been rather uninteresting, but which seem to a good deal above their current levels. A case in point can be found in t e lction of Machine Tool stocks. Over the past two to three years many of t h a ave forming bases whic even when read conservatively, indicate possible Ie s muc 100 above present prices. In recent trading sessions, on pro re e action, a great many of the stocks have broken out on the upside of these . Th ,in this case, technical work has .p.inj;ed out an area .n ,!ion of fundamental radically enough to justify the ti t yz!Wther the Machine Tool industry has change projections. In this particu r pear that the outlook has, indeed, changed and changed radically. h a i ndustry was, formerly, among the most cyclical of all trades, and growth, . t la eO's and early 1960's, has generally been erratic or nil. Yet here, as in so ma 0 industries, technology has drast ically altered the picture in the forrn of so-called or numerically controlled machine tools. The N1C tool is, simply, a device whereby a machine tool operates under the control of a numerical medium, usually paper tape, rather than under the control of a human operato It is, therefore, one more aspect of the automation revolution. N1C tools are nothing new — indeed, they have been on the market for some ten years. What is new, however, is the mass market which these machines appear to be achieving for the first time. Industrywide,probabl 20 of tools now being shipped are numerically controlled, and many companies have backlog figures that run to 50 and 60 N/c machines.One analyst has estimated that 75 of all existing machine tools in the United States could I;e economically replaced by N/c machines. This surge can dramatically alter the outlook for the industry. Among the effects which may be felt by the machine tool companies are the following (1) Cyclical fluctuations will be miti gated or eliminated, as tlie basic demand for N/c equipment will probably not be tied to cap- ital spending. (2) Replacement cycles will be dramatically shortened. N1C machines to be economic must be used on three shifts and they will, therefore, undoubtedly wear out faster. (3) Both dollar volume and profit margins should increase due to the relatively high cost of N1C machine tools compared to conventional tools. (4) Competition will be lessened. Forme ly, machine tools were an industry in which almost anyone could compete. Now, technological know-how and resources available only to the larger companies, will be required. Attractive investment opportunities in the industry abound. Sundstrand (32 1/2) which has been on our recommended list for some time and, as mentioned last week, the high yield ing National Acme (49) will be added on price dips. Other attractive companies appear to be Cincinnati Milling (67 1/2) and Ex-Cell-O (55 5/8). Dow-Jones'Irid..- 940 68 Dow-Jones Rails 232. 95 ANTHONY W. TABELL WALSTON & CO. mc. This market letter IS pubhshed for your convenience rtnd InfOTmfltlon and IS not an offer to sell or A soliCItation to buy any seeuTlties diSCUssed. The information was obtAined from soure!'.!; we bdu!ve to ) reliable. but we do not guarantee Its accurac). Wnl'lton & Co.. lnc. and lts officers. ihrectors or employees may have an interest in or purchase and sell the seCUrities refened to herein. WNS()l –