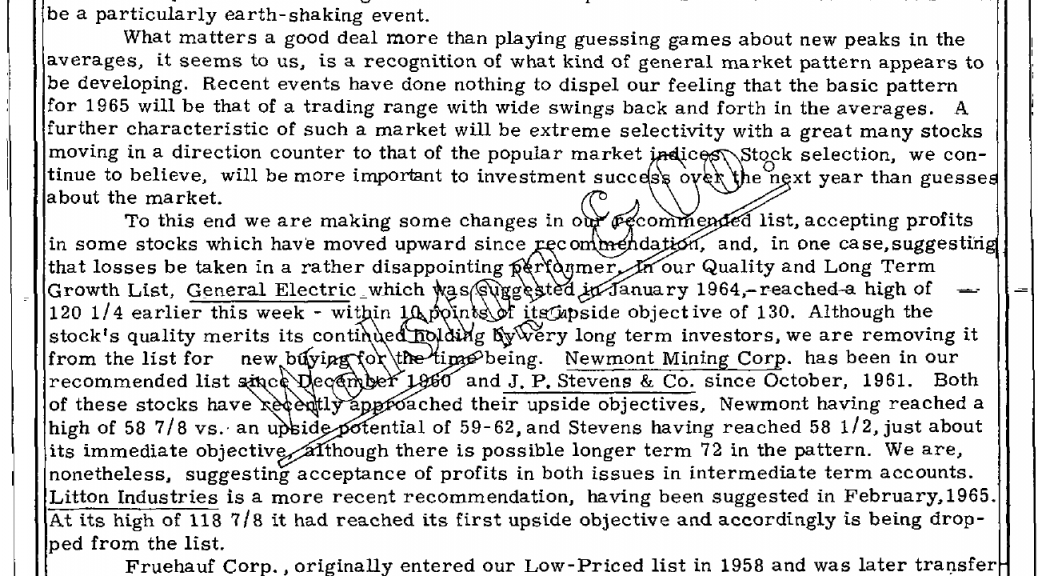 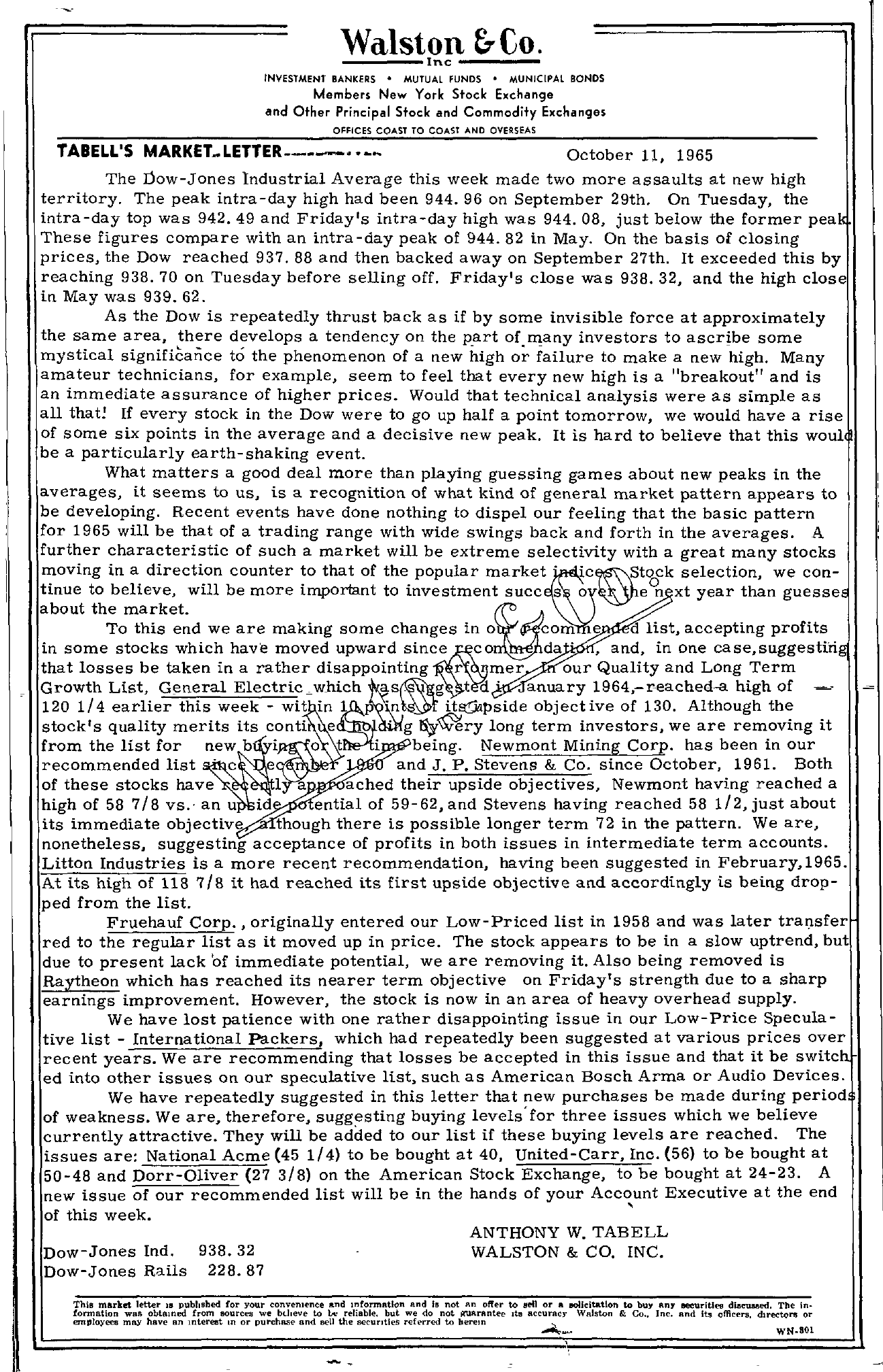 Walston &Co. – Inc – – – – – INVESTMENT BANkERS MUTUAL FUNDS MUNICIPAL BONOS Members New York Stock Exchange and Other Principal Stock and Commodity Exchanges OFFICES COAST TO COAST AND OVERSEAS TABELL'S MARKETLETTER October 11, 1965 The Dow-Jones lndustrial Average this week made two more assaults at new high territory. The peak intra-day high had been 944.96 on September 29th. On Tuesday, the intra-day top was 942.49 and Friday's intra-day high was 944.08, just below the former pea These figures compare with an intra-day peak of 944.82 in May. On the basis of closing prices, the Dow reached 937.88 and then backed away on September 27th. It exceeded this by reaching 938.70 on Tuesday before selling off. Friday's close was 938. 32, and the high close in May was 939.62. As the Dow is repeatedly thrust back as if by some invisible force at approximately the same area, there develops a tendency on the part of.many investors to ascribe some mystical significance to the phenomenon of a new high or failure to make a new high. Many amateur technicians, for example, seem to feel that every new high is a breakout and is an immediate assurance of higher prices. Would that technical analysis were as simple as all that! If every stock in the Dow were to go up half a point tomorrow, we would have a rise of some six points in the average and a decisive new peak. It is hard to believe that this woul be a particularly earth-shaking event. What matters a good deal more than playing guessing games about new peaks in the averages, it seems to us, is a recognition of what kind of general market pattern appears to be developing. Recent events have done nothing to dispel our feeling that the basic pattern for 1965 will be that of a trading range with wide swings back and forth in the averages. A further characteristic of such a market will be extreme selectivity with a great many stocks moving in a direction counter to that of the popular selection, we con- tinue to believe, will be more important to investment succ s 0 On xt year than guesse about the market. To this end we are making some changes in 0 com e a list, accepting profits in some stocks which have moved upward da', and, in one case,suggesti'ri that losses be taken in a rather disappointing r mer our Quality and Long Term Growth List, General t a' anuary 1964,-reached-a high of 120 1/4 earlier this week – wit it6tside objective of 130. Although the stock's quality merits its conti e .g long term investors, we are removing it from the list for new b i 0 t i being. Newmont Mining Corp. has been in our recommended list and J. P. Stevens & Co. since October, 1961. Both of these stocks have ached their upside objectives, Newmont having reached a high of 587/8 vs. an u ential of 59-62,and Stevens having reached 58 1/2,just about its immediate objective though there is possible longer term 72 in the pattern. We are, nonetheless, suggesting acceptance of profits in both issues in intermediate term accounts. Litton Industries is a more recent recommendation, having been suggested in February,1965. At its high of 118 7/8 it had reached its first upside objective and accordingly is being drop- ped from the list. Fruehauf Corp. , originally entered our Low- Priced list in 1958 and was later trarlsfer red to the regular list as it moved up in price. The stock appears to be in a slow uptrend, but due to present lack 'of immediate potential, we are removing it. Also being removed is Raytheon which has reached its nearer term objective on Friday's strength due to a sharp earnings improvement. However, the stock is now in an area of heavy overhead supply. We have lost patience with one rather disappointing issue in our Low-Price Specula- tive list – International Packers, which had repeatedly been suggested at various prices over recent years. We are recommending that losses be accepted in this issue and that it be switc ed into other issues on our speculative list, such as American Bosch Arma or Audio Devices. We have repeatedly suggested in this letter that new purchases be made during period of weakness. We are, therefore, suggesting buying levels' for three issues which we believe currently attractive. They will be added to our list if these buying levels are reached. The issues are National Acme (45 1/4) to be bought at 40, United-Carr, Inc. (56) to be bought at 50-48 and Dorr-Oliver (27 3/8) on the American Stock Exchange, to be bought at 24-23. A new issue of our recommended list will be in the hands of your Acco,unt Executive at the end of this week. ANTHONY W. TABELL Dow-Jones Ind. 938.32 WALSTON & CO. INC. Dow-Jones Rails 228.87 Thill market letter 18 published for your convemence Ilnd Information Rnd 18 not an offer to sell or R aoIieitatlon to buy Rny eeeurities dlaeusaed. Ttle In formation Will obtained from sources we blheve to k reliable, but we do not guarantee Ih accurncy WRiston & Co.. Inc. Rnd its OffiCf'T8. dlrectol'1!l or employees maY have an mterest In or purchasf' and sell the securities referred to berem ., WN-SOl -,