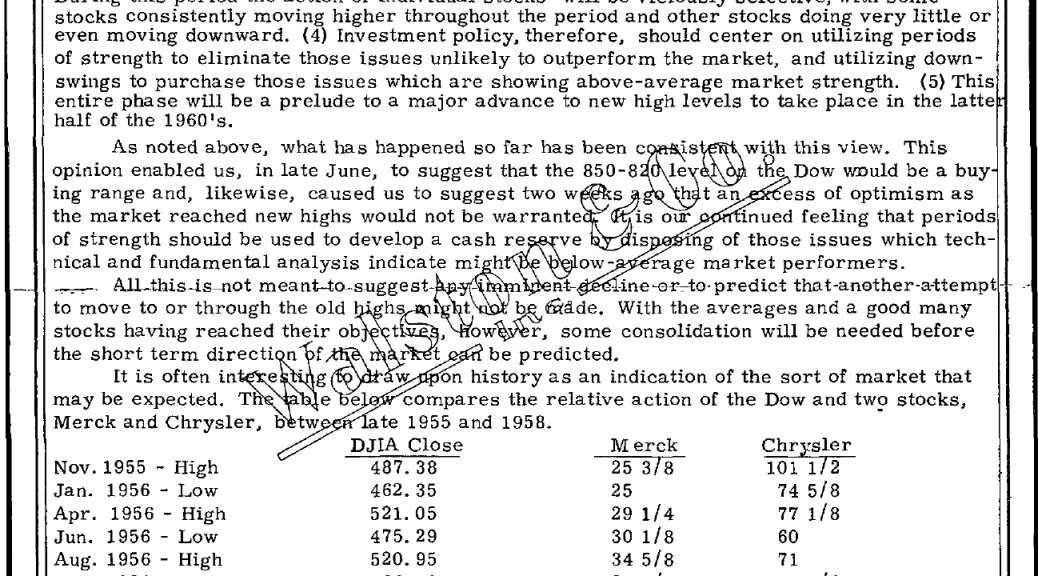 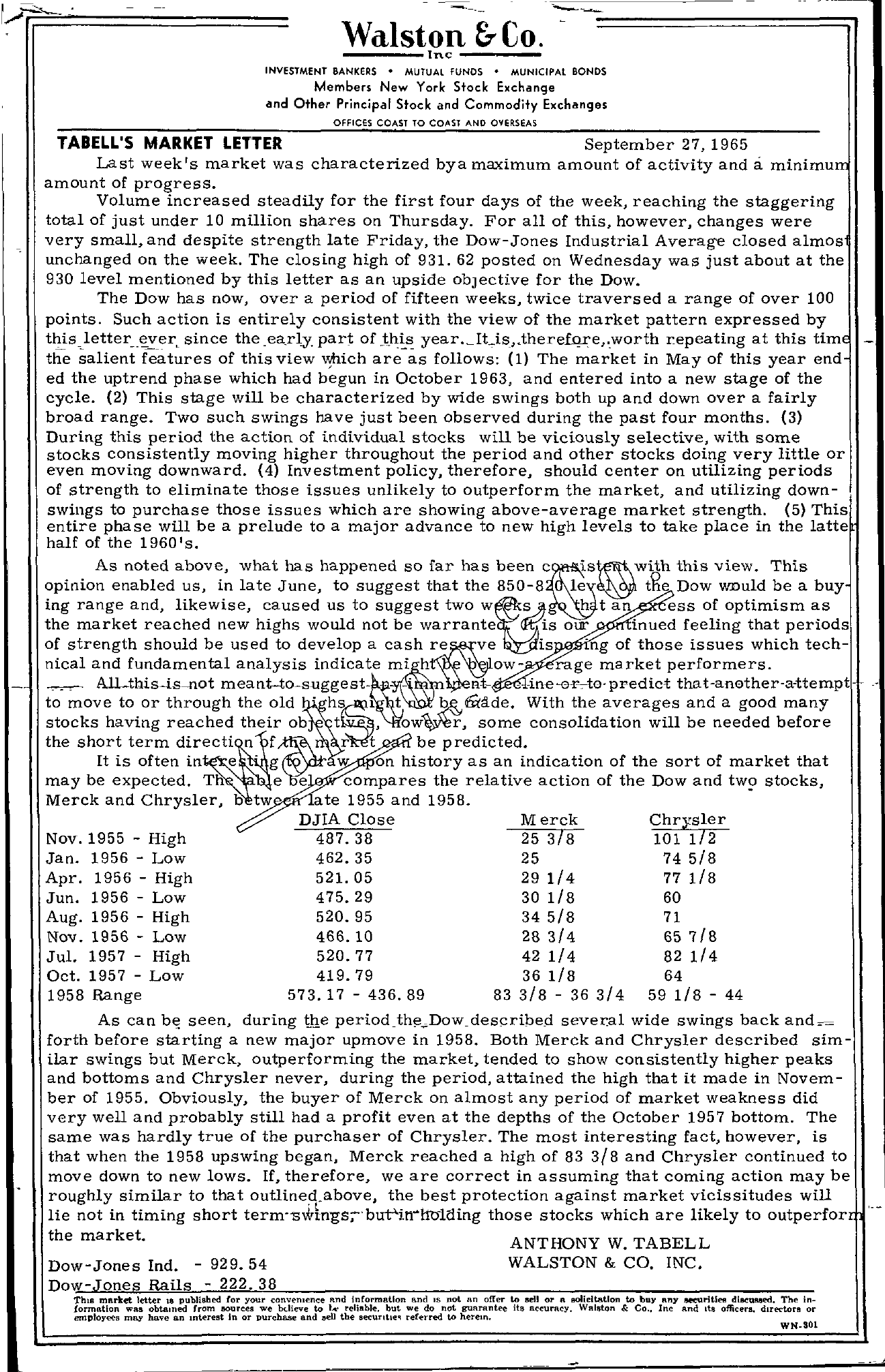 Walston &- Co. Inc INVESTMENT BANKERS MUTUAL fUNDS MUNICIPAL BONDS Members New York Stock Exchange and Other Principal Stock and Commodity Exchanges OFFICES COAST TO COAST AND OVERSEAS TABEll'S MARKET lETTER September 27,1965 Last week's market was characterized bya maximum amount of activity and a minimu amount of progress. Volume increased steadily for the first four days of the week, reaching the staggering total of just under 10 million shares on Thursday. For all of this, however, changes were very small, and despite strength late Friday, the Dow-Jones Industrial Average closed almos unchanged on the week. The closing high of 931. 62 posted on Wednesday was just about at the 930 level mentioned by this letter as an upside objective for the Dow. The Dow has now, over a period of fifteen weeks, twice traversed a range of over 100 points. Such action is entirely consistent with the view of the market pattern expressed by since the part of repeating at this tim the salient features of this view are as follows (1) The market in May of this year end ed the uptrend phase which had begun in October 1963, and entered into a new stage of the cycle. (2) This stage will be characterized by wide swings both up and down over a fairly broad range. Two such swings have just been observed during the past four months. (3) During this period the action of individual stocks will be viciously selective, with some stocks consistently moving higher throughout the period and other stocks doing very little or even moving downward. (4) Investment policy, therefore, should center on utilizing periods of strength to eliminate those issues unlikely to outperform the market, and utilizing down- swings to purchase those issues which are showing above-average market strength. (5) This entire phase will be a prelude to a major advance to new high levels to take place in the latte half of the 1960 'so As noted above, what has happened so far has been with this view. This opinion enabled us, in late June, to suggest that the 850-8 Ie tlie Dow WDuld be a buy ing range and, likewise, caused us to suggest two was h tan ess of optimism as the market reached new highs would not be warrante l1t(is our inued feeling that periods of strength should be used to develop a cash ve is 'ng of those issues which tech- nical and fundamental analYSis indicate mi h ow- rage market performers. Al.L.this-is–I1ot nt- thnt-another-a-ttempt to move to or through the old . hs 1 i'itl.de. With the averages and a good many stocks having reached their owW, some consolidation will be needed before the short term directi n f i ! be predicted. It is often in e . g w on history as an indication of the sort of market that may be expected. Til e e compares the relative action of the Dow and tW! stocks, Merck and Chrysler, b tw ate 1955 and 1958. DJIA Close Merck Chrysler Nov. 1955 – High 487.38 25 378 101 172 Jan. 1956 – Low 462.35 25 74 5/8 Apr. 1956 – High 521. 05 29 1/4 77 1/8 Jun. 1956 – Low 475.29 30 1/8 60 Aug. 1956 – High 520. 95 34 5/8 71 Nov. 1956 – Low 466.10 28 3/4 65 7/8 Jul. 1957 – High 520.77 42 1/4 82 114 Oct. 1957 – Low 419.79 36 1/8 64 1958 Range 573.17 – 436.89 83318 – 363/4 59 118 – 44 As can seen, during tl!e several wide swings back and forth before starting a new major upmove in 1958. Both Merck and Chrysler described sim- ilar swings but Merck, outperforming the market, tended to show consistently higher peaks and bottoms and Chrysler never, during the period, attained the high that it made in Novem- ber of 1955. Obviously, the buyer of Merck on almost any period of market weakness did very well and probably still had a profit even at the depths of the October 1957 bottom. The same was hardly true of the purchaser of Chrysler. The most interesting fact, however, is that when the 1958 upswing began, Merck reached a high of 83 3/8 and Chrysler continued to move down to new lows. If, therefore, we are correct in assuming that coming action may be roughly similar to that outlined. ,above, the best protection against market vicissitudes will lie not in timing short those stocks which are likely to outperfor the market. ANTHONY W. TABELL Dow-Jones Ind. – 929.54 WALSTON & CO. INC. Dow-Jones Rails – 222.38 'J'h18 market letter 18 published for your convemence I\nd information and IS not I\n offer to sell or soIleltation to buy Rny seeuritle!l dlacussro. The inormRtlon was obtained from sources we hdieve to l,, reliable. but we do not guarantee its accuracy. Walston & Co., Inc and Its officers, dlredorll or enlClloyees may have an Interest In or purchase and the secuntle'l referred to herein. WNSOl