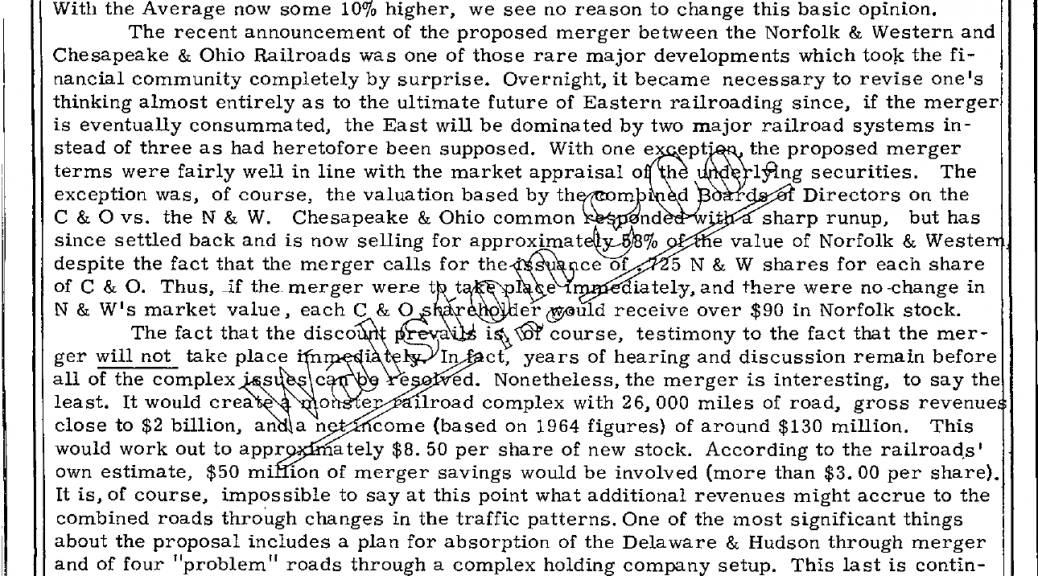 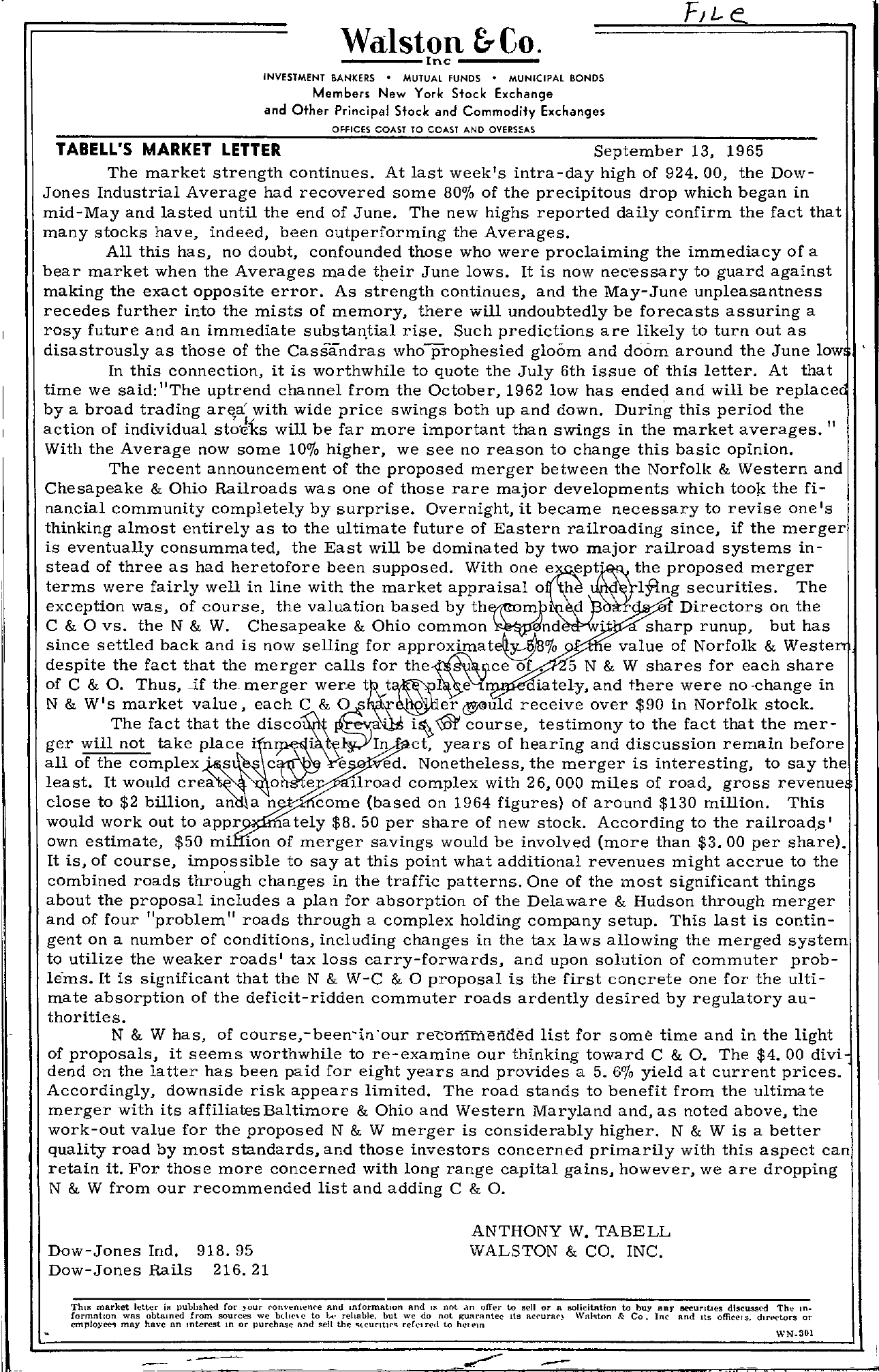 Walston &Co. Inc INVESTMENT BANKERS MUTUAL FUNDS MUNICIPAL BONDS Members New York Stock Exchange and Other Principal Stock and Commodity Exchanges OFFICES COAST TO COAST AND QVERSAS TABEll'S MARKET lETTER September 13, 1965 The market strength continues. At last week's intra-day high of 924.00, the Dow- Jones Industrial Average had recovered some 80 of the precipitous drop which began in mid-May and lasted until the end of June. The new highs reported daily confirm the fact that many stocks have, indeed, been outperforming the Averages. All this has, no doubt, confounded those who were proclaiming the immediacy of a bear market when the Averages made their June lows. It is now nec'essary to guard against making the exact opposite error. As strength continues, and the May-June unpleasantness recedes further into the mists of memory, there will undoubtedly be forecasts assuring a rosy future and an immediate substan.tial rise. Such predictions are likely to turn out as disastrously as those of the Cassandras who prophesied gloom and doom around the June low In this connection, it is worthwhile to quote the July 6th issue of this letter. At that time we said The uptrend channel from the October, 1962 low has ended and will be replace by a broad trading arESa.' with wide price swings both up and down. During this period the action of individual sto'&ks will be far more important than swings in the market averages. With the Average now some 10 higher, we see no reason to change this basic opinion. The recent announcement of the proposed merger between the Norfolk & Western and Chesapeake & Ohio Railroads was one of those rare major developments which took the fi- nancial community completely by surprise. Overnight, it became necessary to revise one's thinking almost entirely as to the ultimate future of Eastern railroading since, if the merger is eventually consummated, the East will be dominated by two major railroad systems in- stead of three as had heretofore been supposed. With e p i i 'the proposed merger terms were fairly well in line with the market appraisal 0 h lYing securities. The exception was, of course, the valuation based by C & 0 vs. the N & W. Chesapeake & Ohio common d Directors on the ' sharp runup, but has since settled back and is now selling for e value of Norfolk & Weste despite the fact that the merger calls for of C & O. Thus, if the merger wer,e & &;N W's market value, each C of. 5 N & W shares for each share iately, and there were no ,change in receive over 90 in Norfolk stock. The fact that the course, testimony to the fact that the mer- ger will not take all of the complex's c In ct, years of hearing and discussion remain before e ed. Nonetheless, the merger is interesting, to say the least. It would crea 0 e llroad complex with 26,000 miles of road, gross revenue close to 2 billion, an a n come (based on 1964 figures) of around 130 million. This would work out to appr a tely 8. 50 per share of new stock. According to the railroad,s' own estimate, 50 mi ion of merger savings would be involved (more than 3.00 per share). It is, of course, impossible to say at this point what additional revenues might accrue to the combined roads through changes in the traffic patterns. One of the most significant things about the proposal includes a plan for absorption of the Delaware & Hudson through merger and of four problem roads through a complex holding company setup. This last is contin- gent on a number of conditions, including changes in the tax laws allowing the merged system to utilize the weaker roads' tax loss carry-forwards, and upon solution of commuter prob- le'ms. It is significant that the N & W-C & 0 proposal is the first concrete one for the ulti- mate absorption of the deficit-ridden commuter roads ardently desired by regulatory au- thorities. N & W has, of course,-been-in'our recormnended list for some time and in the light of proposals, it seems worthwhile to re-examine our thinking toward C & O. The 4.00 divi dend on the latter has been paid for eight years and provides a 5.6 yield at current prices, Accordingly, downside risk appears limited. The road stands to benefit from the ultimate merger with its affiliates Baltimore & Ohio and Western Maryland and, as noted above, the work-out value for the proposed N & W merger is considerably higher. N & W is a better quality road by most standards, and those investors concerned primarily with this aspect can retain it. For those more concerned with long range capital gains, however, we are dropping N & W from our recommended list and adding C & O. Dow-Jones Ind. 918. 95 Dow-Jones Rails 216.21 ANTHONY W. TABELL WALSTON & CO. INC. ThlR market letter iR Ilubhshed for )our t'onvenLeJ1ce and mformatlon and 1! nf')t .m offer to sell or a solicitation to buy any discussed The In. formntwn was obtmned from sources we bdlt''.c to l.t- reltnble. but we do not guarantee Its \\'nl'lton & Co. Inc find Its offkets. dlf.'('tors or cmloyee'l may have an mterest In or purchase and sell the o;tcuntlpt; to WN301