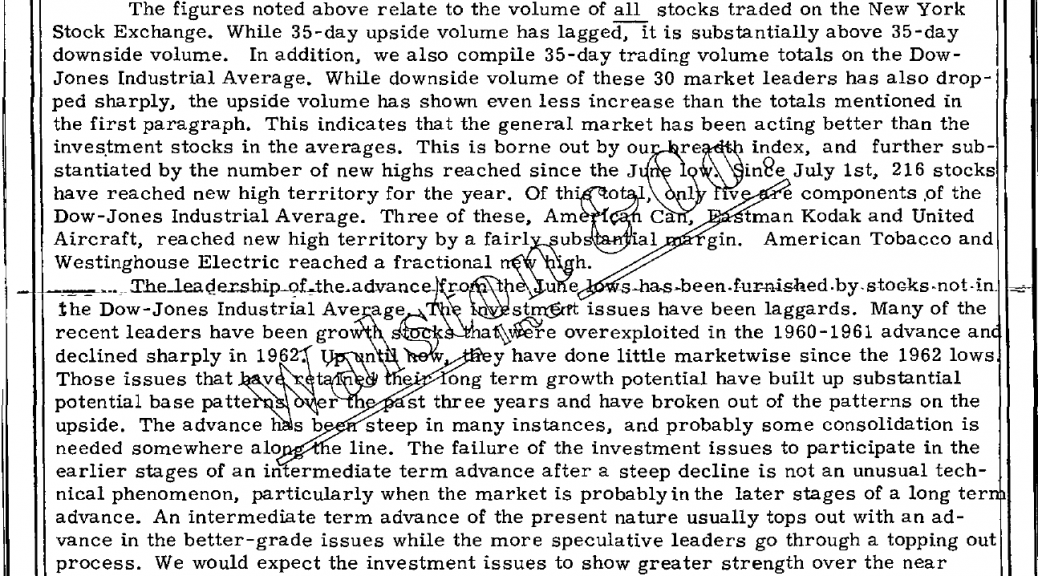 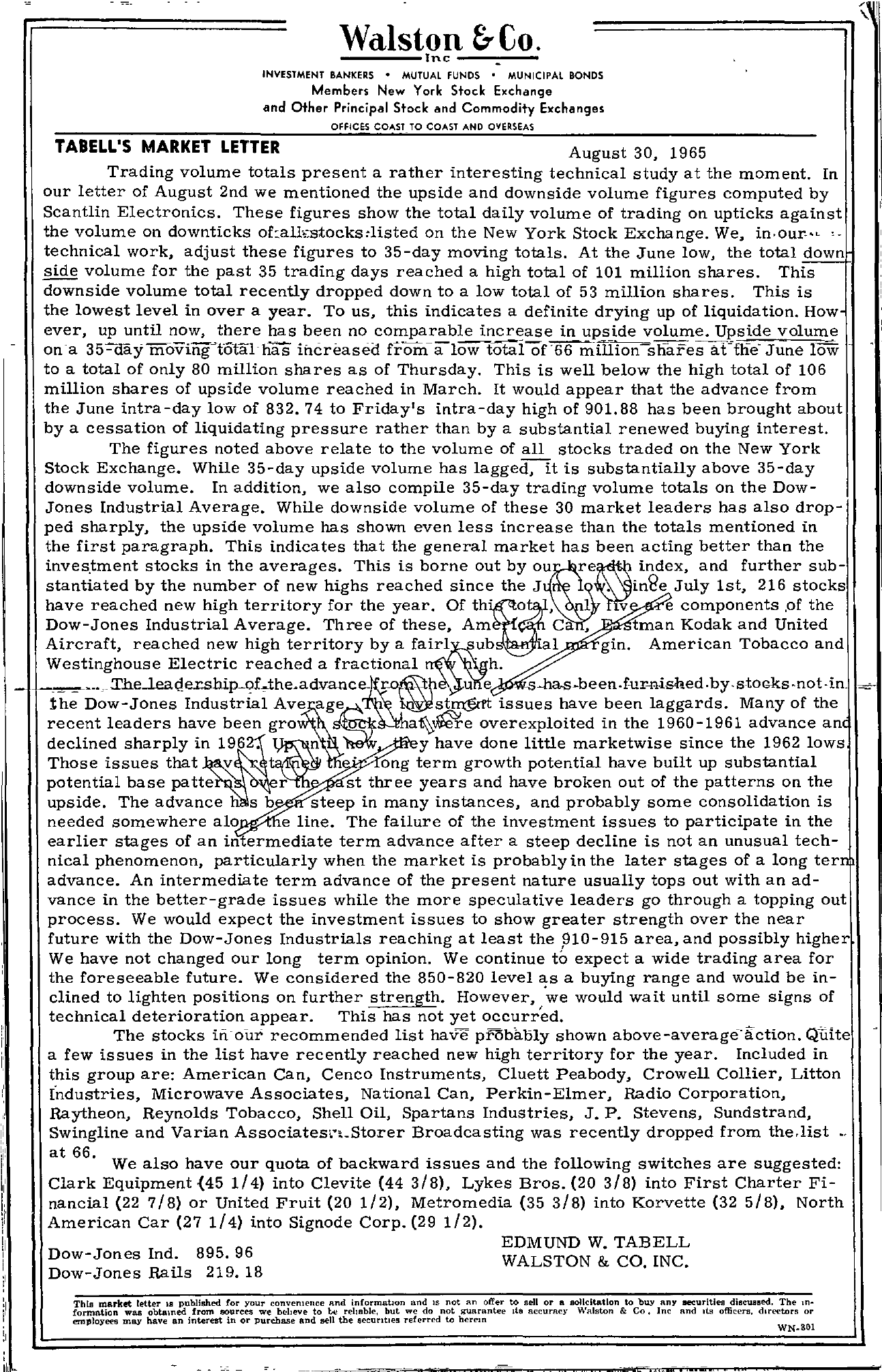 Walston &- Co. INVESTMENT BANKERS MUTUAL FUNDS MUNICIPAL BONDS Members New York Stock Exchange and Other Principal Stock and Commodity Exchanges OFFICES COAST TO COAST AND OVERSEAS TABELL'S MARKET LETTER August 30, 1965 Trading volume totals present a rather interesting technical study at the moment. In our letter of August 2nd we mentioned the upside and downside volume figures computed by Scantlin Electronics. These figures show the total daily volume of trading on upticks against the volume on downticks ofalhs;tocks,listed on the New York Stock Exchange. We, in,ouI''' ,. technical work, adjust these figures to 35-day moving totals. At the June low, the total down side volume for the past 35 trading days reached a high total of 101 million shares. This downside volume total recently dropped down to a low total of 53 million shares. This is the lowest level in over a year. To us, this indicates a definite drying up of liquidation. How ever, up until now, there has been no comparable increase in upside volume. Upside volume ona 35-oay increasea antle' June low to a total of only 80 million shares as of Thursday. This is well below the high total of 106 million shares of upside volume reached in March. It would appear that the advance from the June intra-day low of 832.74 to Friday's intra-day high of 901.88 has been brought about by a cessation of liquidating pressure rather than by a substantial renewed buying interest. The figures noted above relate to the volume of all stocks traded on the New York Stock Exchange. While 35-day upside volume has lagged, it is substantially above 35-day downside volume. In addition, we also compile 35-day trading volume totals on the Dow- Jones Industrial Average. While downside volume of these 30 market leaders has also drop- ped sharply, the upside volume has shown even less increase than the totals mentioned in the first paragraph. This indicates that the general market has been acting better than the inves,tment stocks in the averages. This is borne out by stantiated by the number of new highs reached since the J index, and further sub. inlie July 1st, 216 stocks have reached new high territory for the year. Of thaO, I v e components .of the Dow-Jones Industrial Average. Three of these, Am Ca , tman Kodak and United Aircraft, reached new high territory by a ub 'al gin. American Tobacco and Westinghouse Electric reached a fractional . h. , u e J. '''-has-been.fuI'-l'l,isfied.by,stoGks.not,in, the Dow-Jones Industrial recent leaders have been gro have been laggards. Many of the overexploited in the 1960-1961 advance am declined sharply Those issues that v t y have done little marketwise since the 1962 lows . ong term growth potential have built up substantial potential base patte er st three years and have broken out of the patterns on the upside. The advance s b steep in many instances, and probably some consolidation is needed somewhere alo e line. The failure of the investment issues to participate in the earlier stages of an in ermediate term advance after a steep decline is not an unusual tech- nical phenomenon, particularly when the market is probably in the later stages of a long terr advance. An intermediate term advance of the present nature usually tops out with an ad- vance in the better-grade issues while the more speculative leaders go through a topping out process. We would expect the investment issues to show greater strength over the near future with the Dow-Jones Industrials reaching at least the area, and possibly higher We have not changed our long term opinion. We continue to expect a wide trading area for the foreseeable future. We considered the 850-820 level 'S a buying range and would be in- clined to lighten positions on further strength. However, ,we would wait until some signs of technical deterioration appear. This has not yet occurred. The stocks iii'olu' recommended list have probaBly shown above-averagection. Quite a few issues in the list have recently reached new high territory for the year. Included in this group are American Can, Cenco Instruments, Cluett Peabody, Crowell Collier, Litton Industries, Microwave Associates, National Can, Perkin-Elmer, Radio Corporation, Raytheon, Reynolds Tobacco, Shell Oil, Spartans Industries, J. P. Stevens, Sundstrand, Swingline and Varian AssociatesnStorer Broadcasting was recently dropped from the,list – at 66. We also have our quota of backward.lssues and t.he followmg SW.ltches are suggested Clark Equipment 45 1/4) into Clevite (44 3/8), Lykes Bros. (20 3/8) into First Charter Fi- nancial (22 7/8) or United Fruit (201/2), Metromedia (353/8) into Korvette (325/8), North American Car (271/4) into Signode Corp. (291/2). Dow-Jones Ind. 895.96 Dow-Jones Rails 219.18 EDMUND W. TAB ELL WALSTON & CO. INC. ., This market letter HI publlshed for YOUr convenience Ilnd informatIon Bnd IS not an offer to lIell or II. solicitation to buy Rny securities diBeuBlled. The in- formation was obtained from sources we to lit' rellahle, but we do not gUarantee Ita accuracy ,'alston & C(I. Inc and Its officers, directors or employet.'s may have an interest in or purchase and sell the securities referred to herem WN301 j t -. ,Xl.tit. –