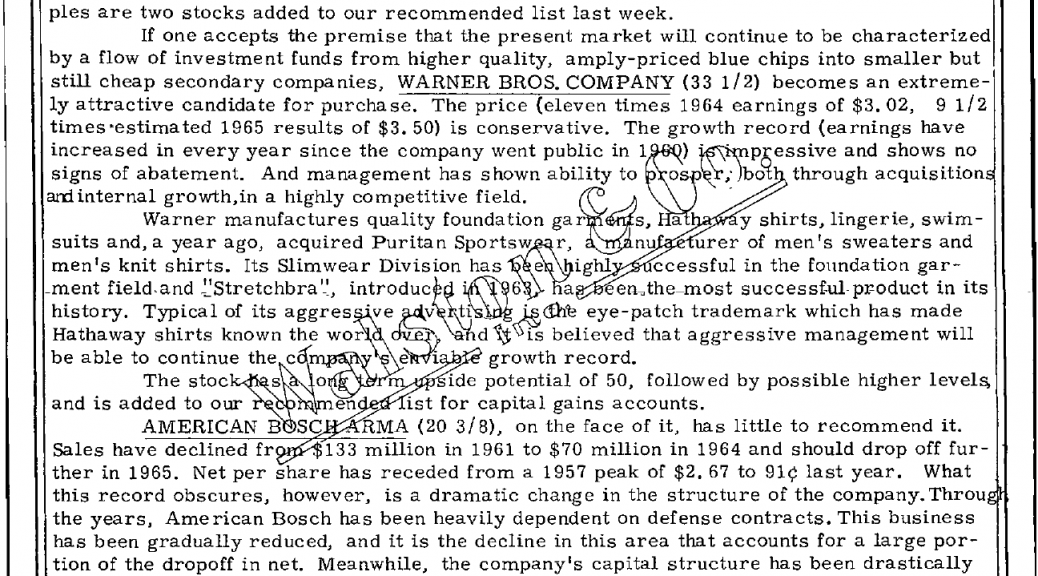 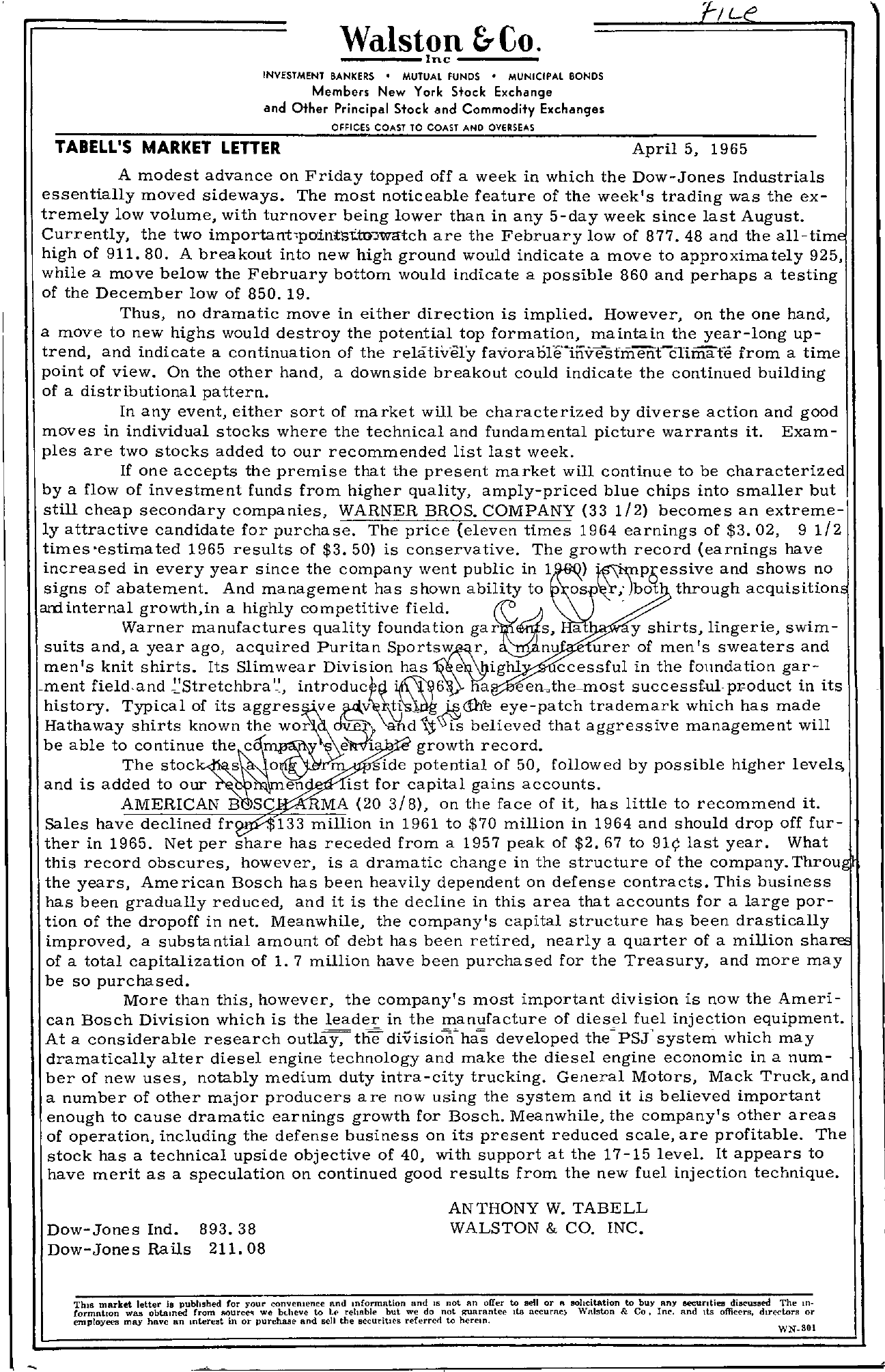 Walston &Co. Inc INVESTMENT BANKERS MUTUAL FUNDS MUNICIPAL BONDS Members New York Stock Exchange and Other Principal Stock and Commodity Exchanges OFFICES COAST TO COAST AND OVERSEAS TABEll'S MARKET lETTER April 5, 1965 A modest advance on Friday topped off a week in which the Dow-Jones Industrials essentially moved sideways. The most noticeable feature of the week's trading was the ex- tremely low volume, with turnover being lower than in any 5-day week since last August. Currently, the two important'pointsito)wcttch are the February low of 877.48 and the all-tim high of 911. 80. A breakout into new high ground would indicate a move to approximately 925, while a move below the February bottom would indicate a possible 860 and perhaps a testing of the December low of 850. 19. Thus, no dramatic move in either direction is implied. However, on the one hand, a move to new highs would destroy the potential top formation, maintain the year-long up- trend, and indicate a continuation of the relativel'y favoraJile'-invesfmenCcTima te from a time point of view. On the other hand, a downside breakout could indicate the continued building of a distributional pattern. In any event, either sort of market will be characterized by diverse action and good moves in individual stocks where the technical and fundamental picture warrants it. Exam- pIes are two stocks added to our recommended list last week. If one accepts the premise that the present market will continue to be characterized by a flow of investment funds from higher quality, amply-priced blue chips into smaller but still cheap secondary companies, WARNER BROS. COMPANY (33 1/2) becomes an extreme- ly attractive candidate for purchase. The price (eleven times 1964 earnings of 3.02, 9 1/2 timesestimated 1965 results of 3.50) is conservative. The growth record (earnings have increased in every year since the company went public in and shows no signs of abatement. And management has shown ability to os ,\'r, )boq through acquisition arrl internal growth, in a highly competitive field. Warner manufactures quality foundation gar s, a y shirts, lingerie, swim- suits and, a year ago, acquired Puritan r, nu urer of men's sweaters and men's knit shirts. Its Slimwear Division has e ighl ccessful in the fonndation gar- ment field.and a successf-ulploduct in its history. Typical of its aggres o v e5;'tfts'klk lR,1h-e eye-patch trademark which has made Hathaway shirts known the wor and'1j;SiS believed that aggressive management will be able to The stoc c s0 e1 growth record. side potential of 50, followed by possible higher level; and is added to our en ist for capital gains accounts. AMERICAN B SC RMA (20 3/8), on the face of it, has little to recommend it. Sales have declined fr 133 million in 1961 to 70 million in 1964 and should drop off fur- ther in 1965. Net per share has receded from a 1957 peak of 2.67 to 91 last year. What this record obscures, however, is a dramatic change in the structure of the company. Throu the years, American Bosch has been heavily dependent on defense contracts. This business has been gradually reduced, and it is the decline in this area that accounts for a large por- tion of the dropoff in net. Meanwhile, the company's capital structure has been drastically improved, a substantial amount of debt has been retired, nearly a quarter of a million sha of a total capitalization of 1. 7 million have been purchased for the Treasury, and more may be so purchased. More than this, however, the company's most important division is now the Ameri- can Bosch Division which is the leader in the manufacture of diesel fuel injection equipment. At a considerable research outlay, divisioithas developed system which may dramatically alter diesel engine technology and make the diesel engine economic in anum- ber of new uses, notably medium duty intra-city trucking. General Motors, Mack Truck, and a number of other major producers are nOw using the system and it is believed important enough to cause dramatic earnings growth for Bosch. Meanwhile, the company's other areas of operation, including the defense business on its present reduced scale, are profitable. The stock has a technical upside objective of 40, with support at the 17-15 level. It appears to have merit as a speculation on continued good results from the new fuel injection technique. Dow-Jones Ind. 893.38 Dow-Jones Rails 211. 08 ANTHONY W. TABELL WALSTON & CO. INC. This market letter is published for )'our convemence Pond mformatlon and IS not I'In offer to seU or R solicitation to buy Rny surlties diaemsed The information was obtamed (rom !;()urctl we lK.heve to t .. rehable but we do not guarantee It.s necurac) \\'Rlston & Co, Ine, and Its officers, directors or employees may have an Interellt in or purchase and sell the securities referred to herein. WNSOl