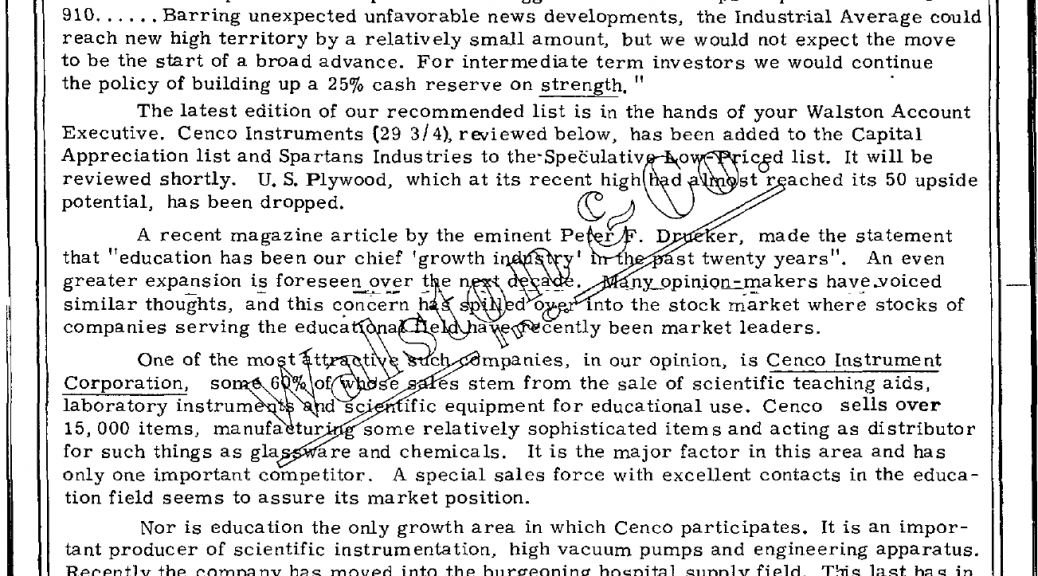 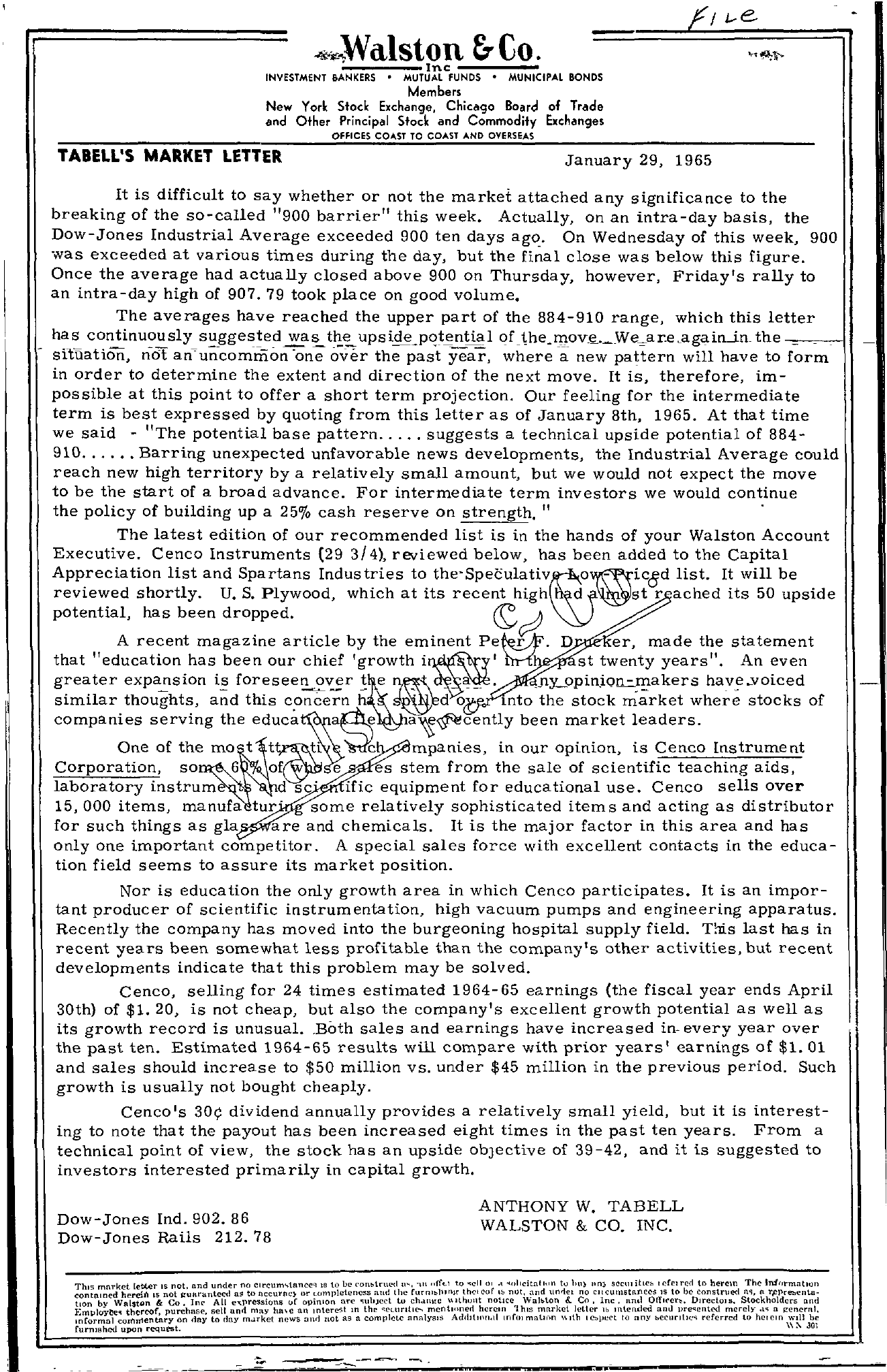 TABELL'S &CO. – Inc INVESTMENT BANKERS MUTUAL FUNDS MUNICIPAL BONDS Members New York Stock Exchange, Chicago Board of Trade and Other Principal Stock and Commodity Exchanges OFFICES COAST TO CO….ST AND OVERSEAS MARKET LETTER January 29, / J..-e 1965 It is difficult to say whether or not the market attached any significance to the breaking of the so-called 900 barrier this week. Actually, on an intra-day basis, the Dow-Jones Industrial Average exceeded 900 ten days ago. On Wednesday of this week, 900 was exceeded at various times during the day, but the final close was below this figure. Once the average had actually closed above 900 on Thursday, however, Friday's rally to an intra-day high of 907.79 took place on good volume. The averages have reached the upper part of the 884-910 range, which this letter has continuously suggested was the upside potential of the.lI1ov.E'C.Wear.ecagain..in the situation, not over thepast-year, ;'here -a new pattern will have to form in order to determine the extent and direction of the next move. It is, therefore, im- possible at this point to offer a short term projection. Our feeling for the intermediate term is best expressed by quoting from this letter as of January 8th, 1965. At that time we said – The potential base pattern….. suggests a technical upside potential of 884- 910…… Barring unexpected unfavorable news developments, the Industr.ial Average could reach new high territory by a relatively small amount, but we would not expect the move to be the start of a broad advance. For intermediate term investors we would continue the policy of building up a 25 cash reserve on strength. The latest edition of our recommended list is in the hands of your Walston Account Executive. Cenco Instruments (29 3/4), reviewed below, has been added to the Capital Appreciation list and Spartans Industries to list. It will be reviewed shortly. U. S. Plywood, which at its recent high d d.potential, has been dropped. r ached its 50 upside A recent magazine article by the eminent that education has been our chief 'growth greater expansion foresee'!..2vjCr similar thoughts, and this c.oncern h 0 companies serving the D er, made the statement MhJ st twenty years. An even .nyopinion-rgakers mto the stock market where stocks of been market leaders. One of the mo t mpanies, in our opinion, is Cenco Instrument Corporation, so 6 e es stem from the sale of scientific teaching aids, laboratory instrum d sc' ific equipment for educational use. Cenco sells over 15,000 items, manufa some relatively sophisticated items and acting as distributor for such things as gla are and chemicals. It is the major factor in this area and has only one important competitor. A special sales force with excellent contacts in the educa- tion field seems to assure its market position. Nor is education the only growth area in which Cenco participates. It is an important producer of scientific instrumentation, high vacuum pumps and engineering apparatus. Recently the company has moved into the burgeoning hospital supply field. T!Ji.s last has in recent years been somewhat less profitable than the company's other activities, but recent developments indicate that this problem may be solved. Cenco, selling for 24 times estimated 1964-65 earnings (the fiscal year ends April 30th) of 1. 20, is not cheap, but also the company's excellent growth potential as well as its growth record is unusual. .Both sales and earnings have increased in- every year over the past ten. Estimated 1964-65 results will compare with prior years' earnings of 1. 01 II and sales should increase to 50 million vs. under 45 million in the previous period. Such growth is usually not bought cheaply. Cenco's 30 dividend annually provides a relatively small yield, but it is interesting to note tha t the payout has been increased eight times in the past ten years. From a technical point of view, the stock has an upside obJective of 39-42, and it is suggested to investors interested primarily in capital growth. Dow-Jones Ind. 902. 86 Dow-Jones Rails 212. 78 ANTHONY W. TABELL WALSTON & CO. INC. ThiS mllrket et!r IS not and under no IS 10 be 11. 'ltl ff… to u, .\ ,,Ollciw.thlll tu hu) seem Icfl'lfCd to herem The InformatIOn contained hereiil IS not as to or LUnlpJetenC1I5 alld the furnlblnng- thetcur Ib not, !'Ind undel no CltcutllstnJlces IS to bc construed n r,ePreo.enln- hon by WaJstcln & (;Q, Inc All epressions of opinion are to chltll!c \\Ithuut nOtice, Wal!ton &. Co, Inc, IIn.l Olfu'en, Dlrcctols, and thereof, purchase, sell and may hu\c un IntereSt In the mentioned herein Ihls mnrket letter Ii Intended anti pre(!nted merel), a Informal commentury on day to rlay m.lrket news 1I0t as n complete analYSIS Addltlnll.11 IIlfOI mallOn \\Ith lC'.o\-lcct to any !CCUrltl.''l referred to hctelll furmshed upon request. ..-