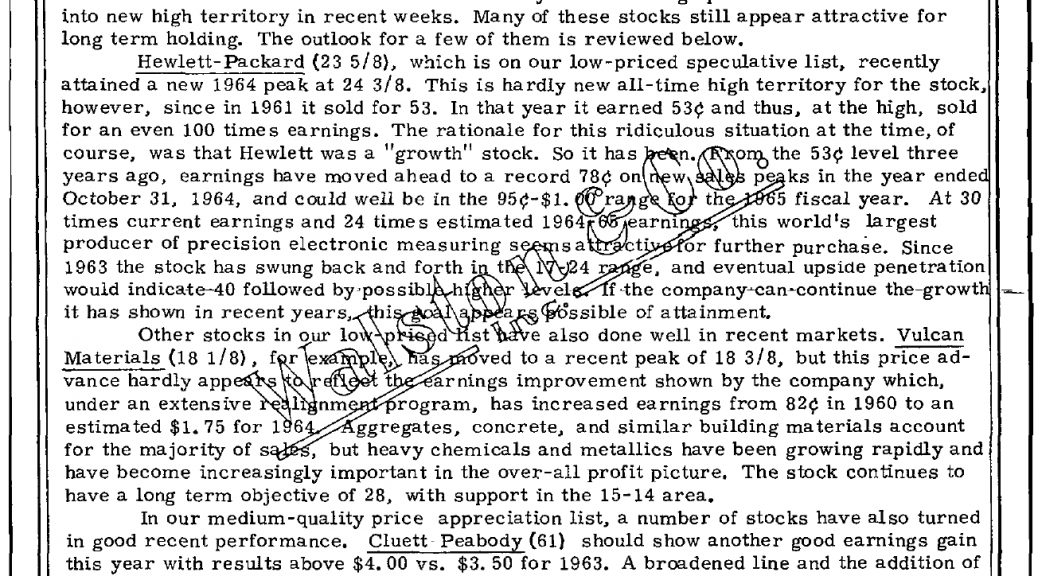 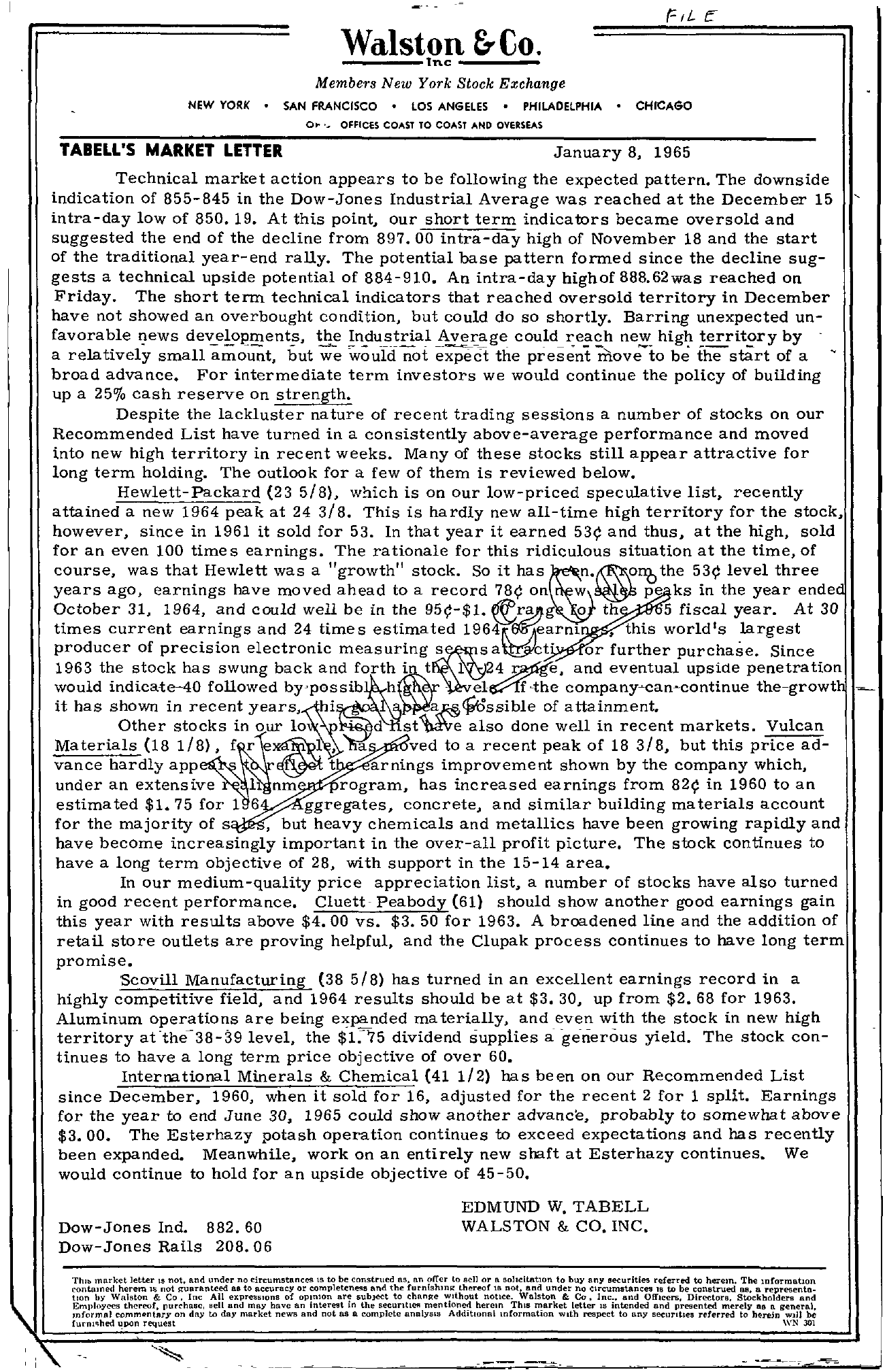 Walston &Co. – Inc –….;.– FIt. E Members New York Stock Exchange NEW YORK SAN FRANCISCO LOS ANGELES PHILADELPHIA CHICAGO 01-' OFFICES COAST TO COAST AND OVERSEAS TABELL'S MARKET LETTER January 8, 1965 Technical market action appears to be following the expected pattern. The downside indication of 855-845 in the Dow-Jones Industrial Average was reached at the December 15 intra-day low of 850. 19. At this point, our short term indicators became oversold and suggested the end of the decline from 897.00 intra-day high of November 18 and the start of the traditional year-end rally. The potential base pattern formed since the decline sug- gests a technical upside potential of 884-910. An intra-day high of 888.62was reached on Friday. The short term technical indicators that reached oversold territory in December have not showed an overbought condition, but could do so shortly. Barring unexpected un- favorable news developments, the Industrial Average could reach new high territory by a relatively small but would not the present rilove-to be fhe start of a broad advance. For intermediate term investors we would continue the policy of building up a 250/0 cash reserve on strength. Despite the lackluster nature of recent trading sessions a number of stocks on our Recommended List have turned in a consistently above-average performance and moved into new high territory in recent weeks. Many of these stocks still appear attractive for long term hOlding. The outlook for a few of them is reviewed below. Hewlett-Packard (23 5/8), w'tich is on our low-priced speculative list, recently attained a new 1964 peak at 24 3/8. This is hardly newall-time high territory for the stock, however, since in 1961 it sold for 53. In that year it earned 53 and thus, at the high, sold for an even 100 times earnings. The rationale for this ridiculous situation at the time, of course, was that Hewlett was a growth stock. So it has the 53 level three years ago, earnings have moved ahead to a record 78 on w pe ks in the year ende October 31, 1964, and could well be in the 95-1. 0 th 5 fiscal year. At 30 times current earnings and 24 times estimated ,this world's largest producer of precision electronic or further purchase. Since 1963 the stock has swung back and tI and eventual upside penetration would indicate-40 followed h. the the-growt it has shown in recent Other stocks in our 10 of attainment. . d st'ba've also done well in recent markets. Vulcan Materials (18 1/8), f r a ved to a recent peak of 18 3/8, but this price ad- vance hardly app t arnings improvement shown by the company which, under an extensive 1 rogram, has increased earnings from 82 in 1960 to an estimated 1.75 for ggregates, concrete, and similar building rna terials account for the majority of s ,but heavy chemicals and metallics have been growing rapidly and have become increasingly important in the over-all profit picture. The stock continues to have a long term objective of 28, with support in the 15-14 area. In our medium-quality price appreciation list, a number of stocks have also turned in good recent performance. Cluett Peabody (61) should show another good earnings gain this year with results above 4.00 vs. 3. 50 for 1963. A broadened line and the addition of retail store outlets are proving helpful, and the Clupak process continues to have long term promise. Scovill Manufacturing (38 5/8) has turned in an excellent earnings record in a highly competitive field, and 1964 results should be at 3.30, up from 2.68 for 1963. Aluminum operations are being expanded rna terially, and even with the stock in new high aterritory atthe-38-39 level, the 1.-75 dividend supplies generous yield. The stock con- tinues to have a long term price objective of over 60. International Minerals & Chemical (41 1/2) has been on our Recommended List since December, 1960, when it sold for 16, adjusted for the recent 2 for 1 split. Earnings for the year to end June 30, 1965 could show another advance, probably to somewhat above 3.00. The Esterhazy potash operation continues to exceed expectations and r.as recently been expanded. Meanwhile, work on an entirely new shaft at Esterhazy continues. We would continue to hold for an upside objective of 45-50. Dow-Jones Ind. 882.60 Dow-Jones Rails 208.06 EDMUND W. TABELL WALSTON & CO. INC. Thlb murket letter IS not. and under no circumstanc('S IS to be Construed as, an offer to sell or II. SOllcltatlon to buy any securities referred to herem. The mformatIon contamed herem 11 not guaranteed as to accuracy or completeness and the furnishmK thereof IS not, and under no Circumstances IS to be construed. 85, 8 representa- tIOn by Walston & Co, Inc All expressIons of opIniOn ar1,l' subject to change 'Ithout notlce Walston & Co, Inc. and Officers, DireetofiJ. Stockholders and thereof, purchase, scll and may have an interest In the securttl()fi herem ThIS !arket letter IS intended and presented merely as a general, mformnl commQntary on day to day market news and not as a eomplcte analYSIS Additional mformatlon With nlSpcct to Lny securitIes referred to herein will be (urnt;hcd l!pQn request WN JOI