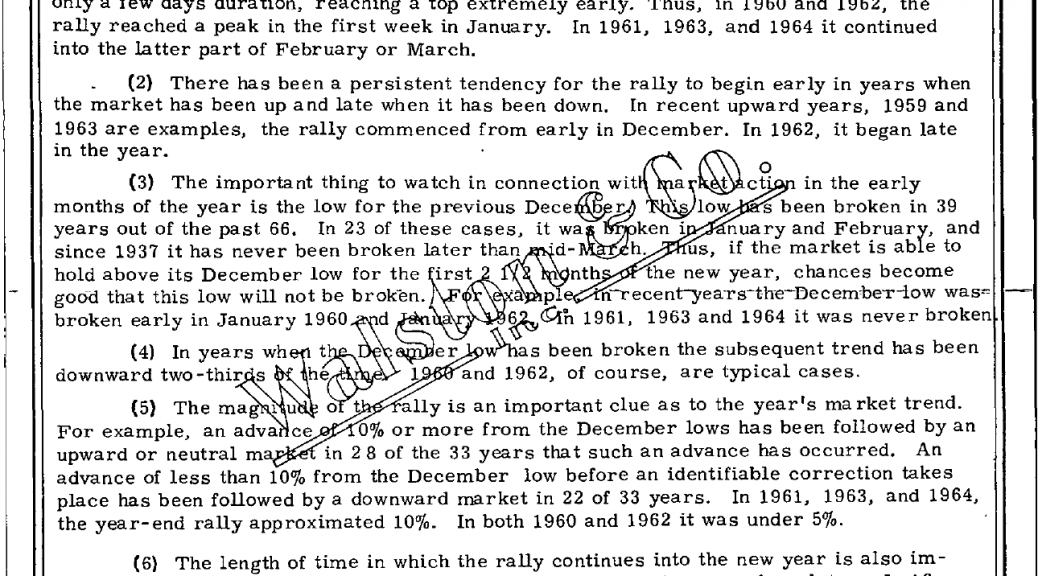 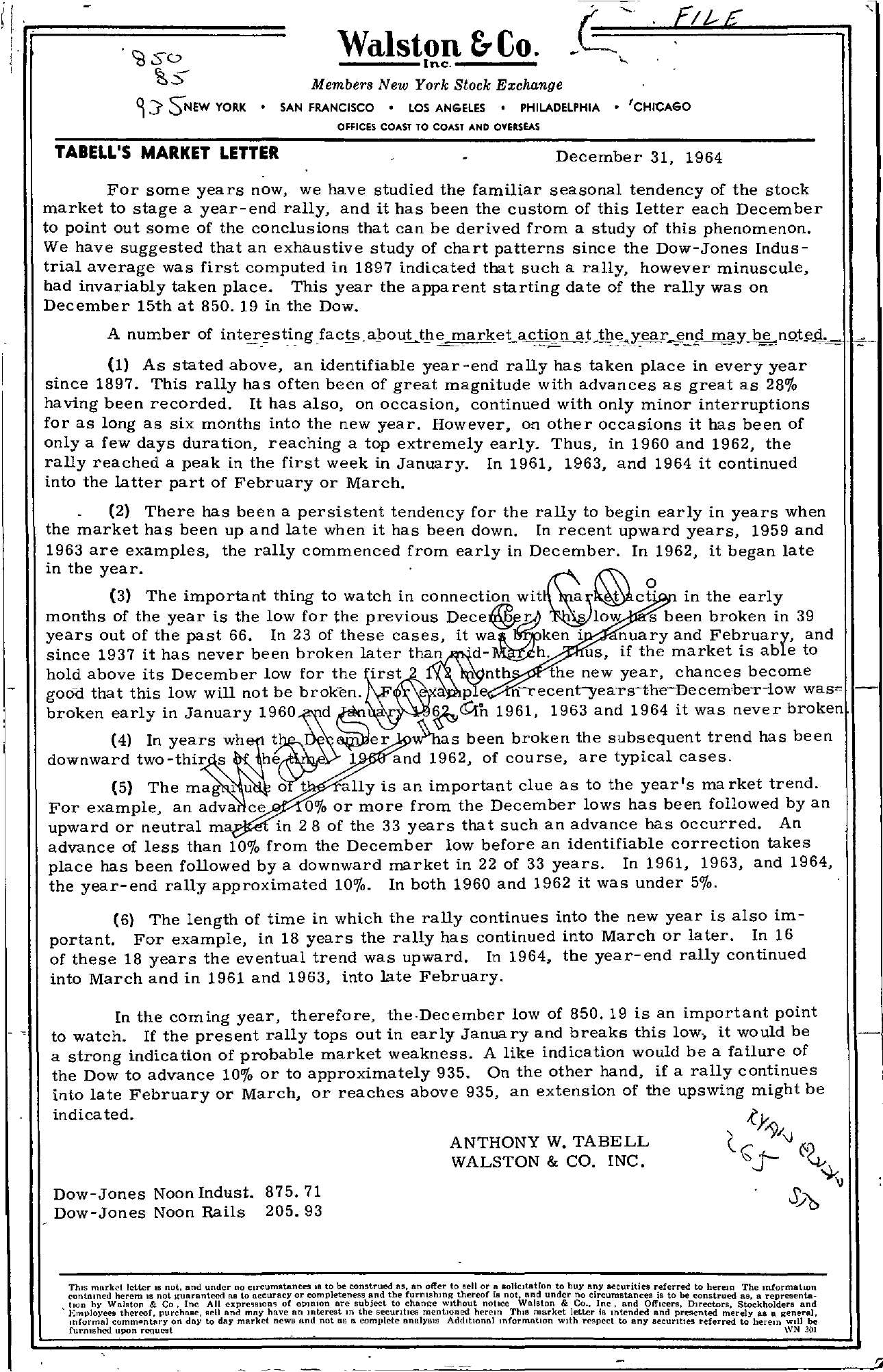 (! (r. I I Walston &- Co. —.;..;, Inc. ;,.-.;…….;…..;;.. 93' 5NEW YORK Members New York Stock Exchange SAN FRANCISCO LOS ANGELES PHILADELPHIA 'CHICAGO OFFICES COAST TO COAST AND OVERSEAS TABEll'S MARKET lETTER December 31, 1964 For some years now, we have studied the familiar seasonal tendency of the stock market to stage a year-end rally, and it has been the custom of this letter each December to point out some of the conclusions that can be derived from a study of this phenomenon. We have suggested that an exhaustive study of chart patterns since the Dow-Jones Industrial average was first computed in 1897 indicated that such a rally, however minuscule, had invariably taken place. This year the apparent starting date of the rally was on December 15th at 850. 19 in the Dow. A number of . .. — — —— — may be n9.t.!d.. . – (1) As stated above, an identifiable year -end rally has taken place in every year since 1897. This rally has often been of great magnitude with advances as great as 280/0 having been recorded. It has also, on occasion, continued with only minor interruptions for as long as six months into the new year. However, on other occasions it has been of only a few days duration, reaching a top extremely early. Thus, in 1960 and 1962, the rally reached a peak in the first week in January. In 1961, 1963, and 1964 it continued into the latter part of February or March. (2) There has been a persistent tendency for the rally to begin early in years when the market has been up and late when it has been down. In recent upward years, 1959 and 1963 are examples, in the year. the rally commenced from . early in Decembte\r\.\ In 1962, it began late (3) The important thing to watch in connection in the early months of the year is the low for the previous s been broken in 39 years out of the past 66. In 23 of these cases, it wa\\ since 1937 it has never been broken later i ruaryand Feb.ruary, and us, 1f the market 1S able to hold above its December low for the good that this low will not be broken. nth a p. the new year, chances become broken early in January d 1961, 1963 and 1964 1t was never broken (4) In years wh t downward two-thir he been broken the subsequent trend has been 1 and 1962, of course, are typical cases. (5) The rna 0 t ally is an important clue as to the year's rna rket trend. For 00/0 or more from the December lows has been followed by an upward or neutral m in 28 of the 33 years tha t such an advance has occurred. An advance of less than 100/0 from the December low before an identifiable correction takes place has been followed by a downward market in 22 of 33 years. In 1961, 1963, and 1964, the year-end rally approximated 100/0. In both 1960 and 1962 it was under 50/0. (6) The length of time in which the rally continues into the new year is also important. For example, in 18 years the rally has continued into March or later. In 16 of these 18 years the eventual trend was upward. In 1964, the year-end rally continued into March and in 1961 and 1963, into late February. In the coming year, therefore, theDecember low of 850. 19 is an important point to watch. If the present rally tops out in early January and breaks this low, it would be a strong indication of probable market weakness. A like indication would be a failure of the Dow to advance 100/0 or to approximately 935. On the other hand, if a rally continues into late February or March, or reaches above 935, an extension of the upswing might be indica ted. ANTHONY W. TABELL WALSTON & CO. INC. Dow-Jones Noon Indust. 875.71 Dow-Jones Noon Rails 205.93 ThIS mllrkel letter IS not, and under no Circumstances 18 to be construed as, an offer to sell or n soliCItation to buy any aecurities referred to herem The informatIOn contained herem IS not gunrnntC!ed RS to accuracy or completeness Ilnd the furnlshmg thereof Is not. and under no circumstances is to be construed as a representa- , tWD by Wnleton & Co, Inc All of OPInion are subject to chanJ!e WIthout notIce Walston & Co., Inc, and OffIcers, DIrectors, and Jomployccs thereof, purchDBc, Bcll and may havc an mterest m the securities mentIoned hcrem ThIS market letter is mtended and presented merely as a general, mformal comm..ntnry on dny to day market news and not as a complete analYSIS AddItional mformntlon With respect to any securitIes referred to herem Will be furnIshed llpon request WN 301