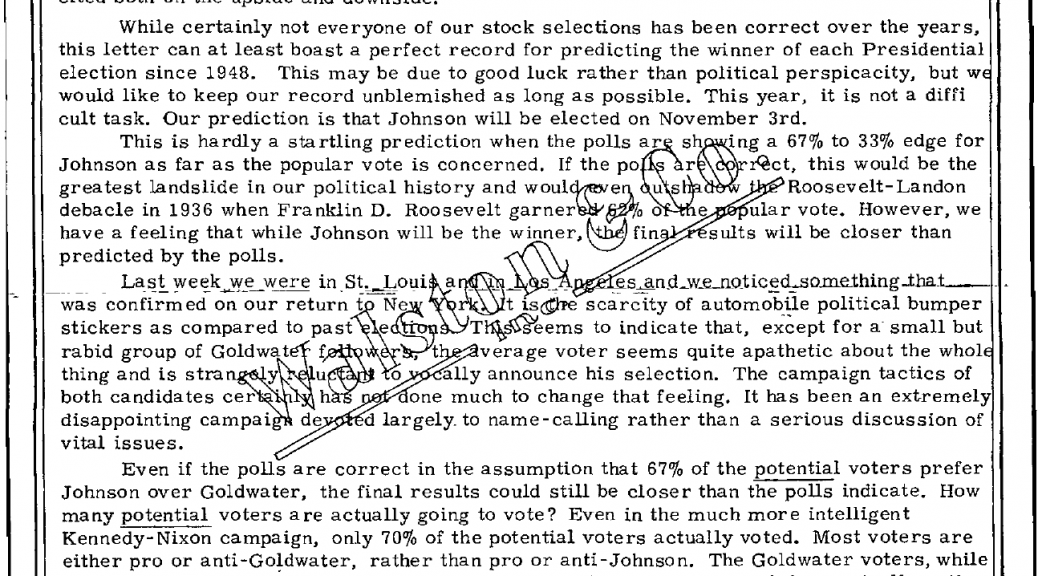 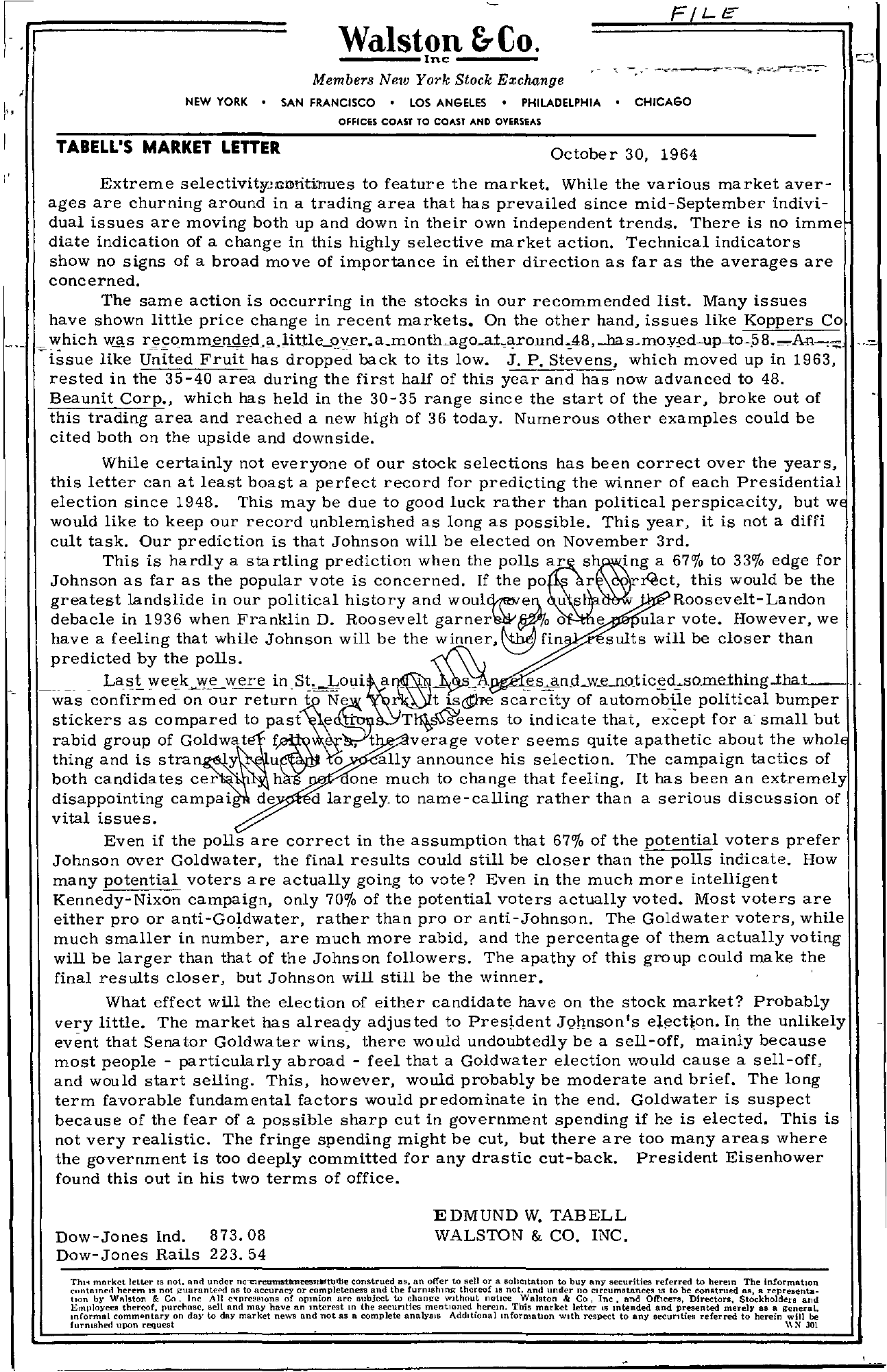 Walston &- Co. F LE —–Inc —– Members New York Stock Exchange ; NEW YORK SAN FRANCISCO LOS ANGELES PHILADELPHIA CHICAGO OFFICES COAST TO COAST AND OVERSEAS TABEll'S MARKET lETTER October 30, 1964 Extreme selectivitYJclJ)riti1Tlues to feature the market. While the various market aver- ages are churning around in a trading area that has prevailed since mid-September indivi- dual issues are moving both up and down in their own independent trends. There is no imme diate indication of a change in this highly selective rna rket action. Technical indicators show no signs of a broad move of importance in either direction as far as the averages are concerned. The same action is occurring in the stocks in our recommended list. Many issues have shown little price change in recent markets. On the other hand, issues like Koppers Co which like U;iited Fruit has droppe-cj back to its low. J. P. which moved up in 1963, rested in the 35-40 area during the first half of this year and has now advanced to 48. Beaunit Corp., which has held in the 30-35 range since the start of the year, broke out of this trading area and reached a new high of 36 tOday. Numerous other examples could be cited both on the upside and downside. While certainly not everyone of our stock selections has been correct over the years, this letter can at least boast a perfect record for predicting the winner of each Presidential election since 1948. This may be due to good luck rather than political perspicacity, but w would like to keep our record unblemished as long as possible. This year, it is not a diffi cult task. Our prediction is that Johnson will be elected on November 3rd. This is hardly a startling prediction when the a 67 to 33 edge for Johnson as far as the popular vote is concerned. If the po r tect, this would be the greatest landslide in our political history and woulC\1!!Ve.'3!. us Roosevelt-Landon debacle in 1936 when Franklin D. Roosevelt 0 e ular vote. However, we have a feeling that while Johnson will be the winner, fin sults will be closer than predicted by the polls. I . stickers as compared to past e . to indicate that, except for a- small but rabid group of Goldwat ,t verage voter seems quite apathetic about the whol thing and is stra y both candidates cer' u h 0 ally announce his selection. The campaign tactics of one much to change that feeling. It has been an extremely disappointing campai de d largely to name-calling rather than a serious discussion of vital issues. Even if the polls are correct in the assumption that 67 of the potential voters prefer Johnson over Goldwater, the final results could still be closer than the polls indicate. How many potential voters are actually going to vote Even in the much more intelligent Kennedy- Nixon campaign, only 70 of the potential voters actually voted. Most voters are either pro or anti-Goldwater, rather than pro or anti-Johnson. The Goldwater voters, while much smaller in number, are much more rabid, and the percentage of them actually voting will be larger than that of the Johnson followers. The apathy of this group could make the final results closer, but Johnson will still be the winner. ' What effect will the election of either candidate have on the stock market Probably very litile. The market has already adjusted to Prestdent Jghnson's II'\ the unlikely event that Senator Goldwater wins, there would undoubtedly be a sell-off, mainly because most people – particularly abroad – feel that a Goldwater election would cause a sell-off, and would start selling. This, however, would probably be moderate and brief. The long term favorable fundamental factors would predominate in the end. Goldwater is suspect because of the fear of a possible sharp cut in government spending if he is elected. This is not very realistic. The fringe spending might be cut, but there are too many areas where the government is too deeply committed for any drastic cut-back. President Eisenhower found this out in his two terms of office. Dow-Jones Ind. 873.08 Dow-Jones Rails 223.54 EDMUND W. TAB ELL WALSTON & CO. INC. mnrket letter IS not. Ilnd TlOI1r't!tlttlSttmees'J'.'tt1me construed as, an offer to lieU or a sohcltatlon to buy any securities referred to herem The information …nntnmecl herem IS not guarnntePd ns to accuracy or completeness and the rurnlshmg thereof IS not, llnd under no circumstances 18 to be construed B.S, II tmn by Wnlston & Co, Inc All e'lpTCSSlOns ot opmion ar!) Bubject. t.o chango Without. notice Walston & Co, Inc. and Officers, Din-etoTB. Stockholders and Emllloyees thereof, purchase. sell and may have an mterest III the securities mentlOnod herein. This market letter IS mtended and presented merely as a general. Informal commontary on d8)' to day market ne.,'I'l1 and not as a complete analysIs Additional mformatlon With respect to any securities reterred to herein will be furnished upon request \\N 301