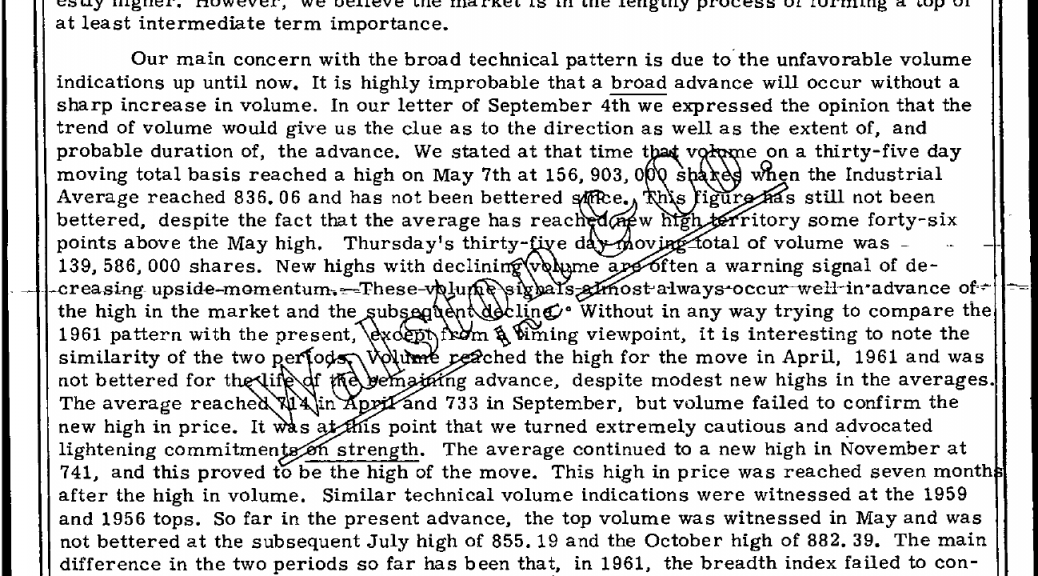 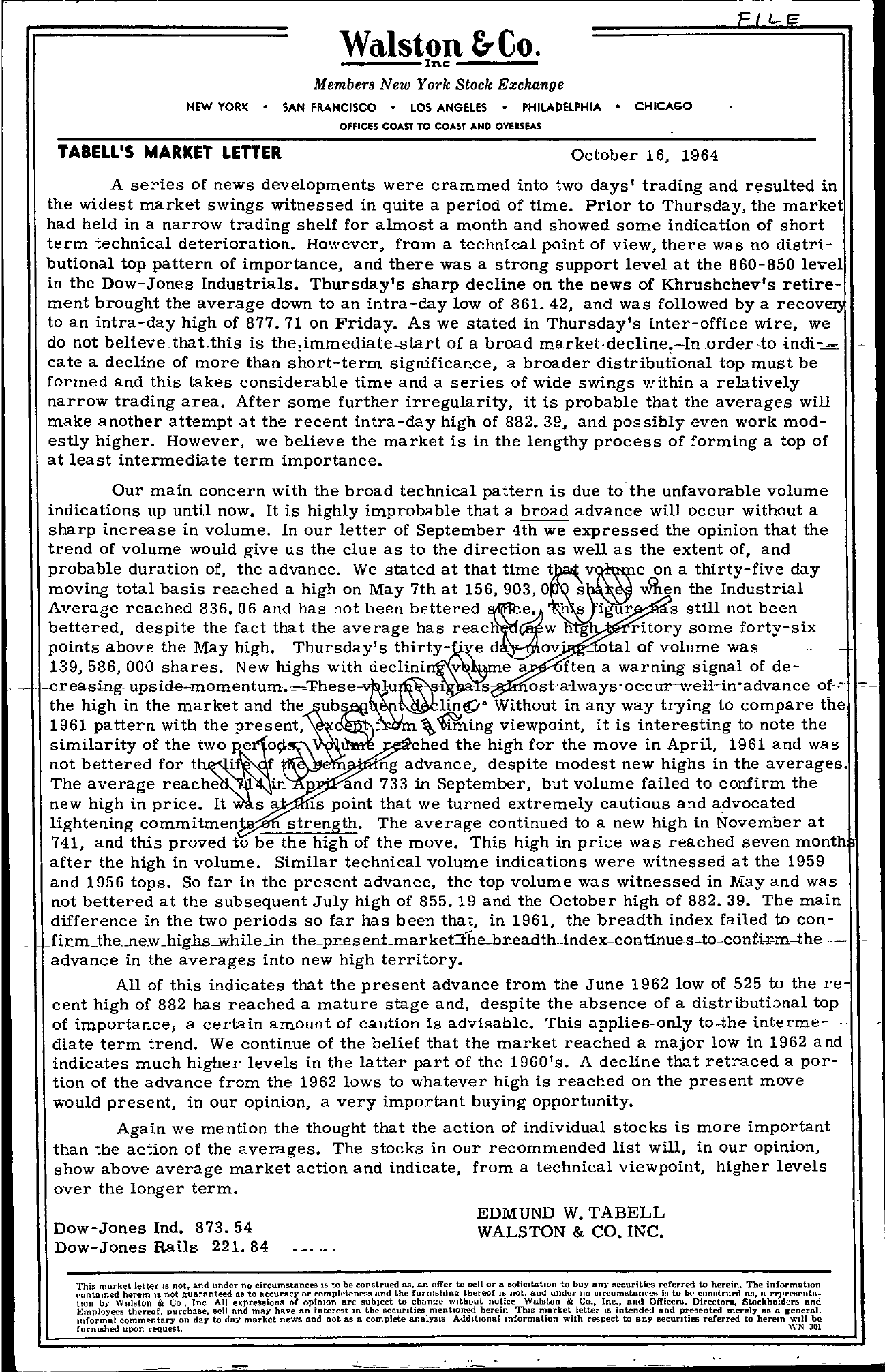 ————————————————————————— — Walston &Co. Inc —– Le Members New York Stock Exch4nge NEW YORK SAN FRANCISCO LOS ANGELES PHILADELPHIA CHICAGO OFFICES COAST TO COA.ST AND OVERSEAS TABELL'S MARKET LETTER October 16, 1964 A series of news developments were crammed into two days' trading and resulted in the widest market swings witnessed in quite a period of time. Prior to Thursday, the marke had held in a narrow trading shelf for almost a month and showed some indication of short term technical deterioration. However, from a technical point of view, there was no distri- butional top pattern of importance, and there was a strong support level at the 860-850 level in the Dow-Jones Industrials. Thursday's sharp decline on the news of Khrushchev's retirement brought the average down to an intra-day low of 861. 42, and was followed by a recov to an intra-day high of 877.71 on Friday. As we stated in Thursday's inter-office wire, we do not believethat.this is the,immediate-start of a broad marketdecline.-In.orcter.to indi-. cate a decline of more than short-term significance, a broader distributional top must be formed and this takes considerable time and a series of wide swings within a relatively narrow trading area. After some further irregularity, it is probable that the averages will make another attempt at the recent intra-day high of 882.39, and possibly even work modestly higher. However, we believe the market is in the lengthy process of forming a top of at least intermediate term importance. Our main concern with the broad technical pattern is due to' the unfavorable volume indications up until now. It is highly improbable that a broad advance will occur without a sharp increase in volume. In our letter of September 4th we expressed the opinion that the trend of volume would give us the clue as to the direction as well as the extent of, and probable duration of, the advance. We stated at that time on a thirty-five day e'moving total basis reached a high on May 7th at 156,903,0 s the Industrial Average reached 836.06 and has not been bettered 's igur s still not been bettered, despite the fact that the average has reacH w 11 g ritory some forty-six points above the May high. Thursday's – . ed ov otal of volume was – o. -. 139,586, 000 shares. New highs with declini v e a ften a warning signal of de- -creasing- o – s of'- — the high in the market and Without in any way trying to compare the 1961 pattern with the present, \ viewpoint, it is interesting to note the similarity of the two p'e o r e ched the high for the move in April, 1961 and was not bettered for t i . 'ng advance, despite modest new highs in the averages. The average reache in . and 733 in September, but volume failed to confirm the new high in price. It is point that we turned extremely cautious and advocated lightening commitmen strength. The average continued to a new high in November at 741, and this proved to be the high of the move. This high in price was reached seven month after the high in volume. Similar technical volume indications were witnessed at the 1959 and 1956 tops. So far in the present advance, the top volume was witnessed in May and was not bettered at the subsequent July high of 855.19 and the October high of 882. 39. The main difference in the two periods so far has been that, in 1961, the breadth index failed to con- firmthenewhighs..while -.in the-PTes enLmarket-1hebreadth-indexcontinue-s-to-conf.i-L'm-the – – advance in the averages into new high territory. All of this indicates that the present advance from the June 1962 low of 525 to the recent high of 882 has reached a mature stage and, despite the absence of a distributiJnal top of importance, a certain amount of caution is advisable. This applies-only to-the interme- — diate term trend. We continue of the belief that the market reached a major low in 1962 and indicates much higher levels in the latter part of the 1960's. A decline that retraced a portion of the advance from the 1962 lows to whatever high is reached on the present move would present, in our opinion, a very important buying opportunity. Again we mention the thought that the action of individual stocks is more important than the action of the averages. The stocks in our recommended list will, in our opinion, show above average market action and indicate, from a technical viewpoint, higher levels over the longer term. Dow-Jones Ind. 873. 54 Dow-Jones Rails 221. 84 EDMUND W. TABELL WALSTON & CO. INC. This mnrket letter IS not. (ond under no eircumstaneefllli to be construed 8.8, an offer to sell or ('ontnmcd herem IS not guaranteed aB to accuracy or eompleteness and the furn16hlnf;' thereof a 15 soliCitation to buy not. and under no any seeurlties rderTed circumstances is to be to herein. construed The information as, a representa- 110n by Walston & Co, Inc All expressions of opinion are AubJect to change Without notice Walston & Co., Inc., and Oft'icerIJ, Directors, Stockholders and Employees thereof mformal purchase, on day tsoeldl an ay d may marke have a t neWli n a in nd terest In not as a the securIties mentioned herein ThiS market letter 18 intended complete analysIs AdditIOnal Information with respect to any and presented merely as a general, securities referred to herem Will be furnished upon request. \\'N 301