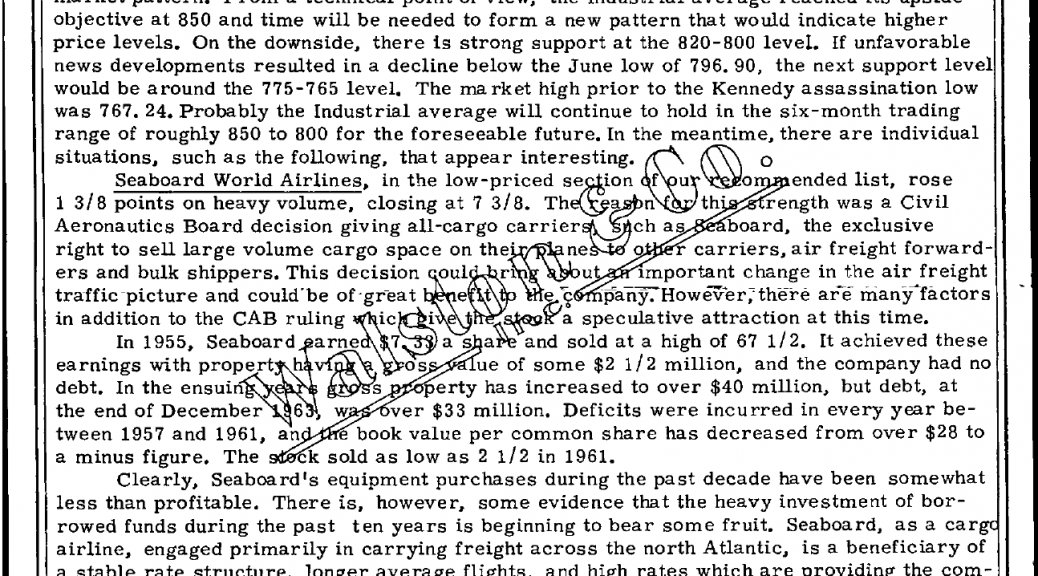 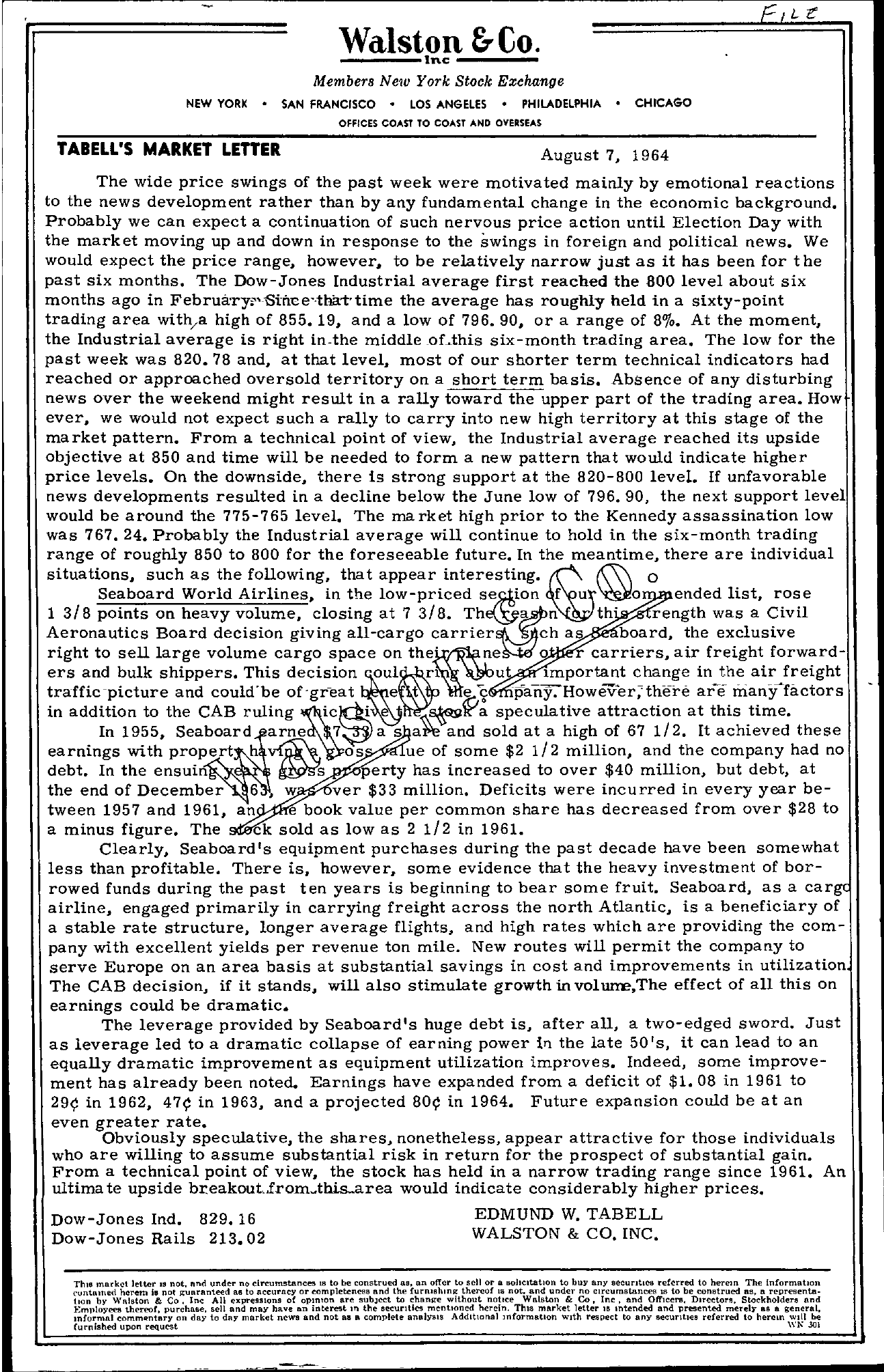 Walston Co.&- lnc —– Members New York Stock Exchange NEW YORK SAN FRANCISCO LOS ANGELES PHILADELPHIA CHICAGO OFFICES COAST TO COAST AND OVERSEAS TABELL'S MARKET LETTER August 7, 1964 The wide price swings of the past week were motivated mainly by emotional reactions to the news development rather than by any fundamental change in the economic background. Probably we can expect a continuation of such nervous price action until Election Day with the market moving up and down in response to the swings in foreign and political news. We would expect the price range, however. to be relatively narrow just as it has been for the past six months. The Dow-Jones Industrial average first reached the 800 level about six months ago in the average has roughly held in a sixty-point trading area witlya high of 855. 19, and a low of 796.90, or a range of 80/0. At the moment, the Industrial average is right in.the middleoLthis six-month trading area. The low for the past week was 820.78 and, at that level, most of our shorter term technical indicators had reached or approached oversold territory on a short term basis. Absence of any disturbing news over the weekend might result in a rally toward the upper part of the trading area. How ever, we would not expect such a rally to carry into new high territory at this stage of the market pattern. From a technical point of view, the Industrial average reached its upside objective at 850 and time will be needed to form a new pattern that would indicate higher price levels. On the downside, there is strong support at the 820-800 level. If unfavorable news developments resulted in a decline below the June low of 796.90, the next support level would be around the 775-765 level. The ma rket high prior to the Kennedy assassination low was 767.24. Probably the Industrial average will continue to hold in the six-month trading range of roughly 850 to 800 for the foreseeable future. In the meantime, there are individual situations, such as the following, that appear interesting. 0 Seaboard World Airlines, in the low-priced se..s,;tion f u ended list, rose 1 3/8 points on heavy volume, closing at 7 3/8. th' rength was a Civil Aeronautics Board decision giving all-cargo carrierE\\ as board, the exclusive right to sell large volume cargo space on Q I' carriers, air freight forward- ers and bulk shippers. This u important change in the air freight traffic'picture and could'be of-gr-eat e t in addition to the CAB ruling e speculative attraction at this time. In 1955, Seaboard arne s aPe and sold at a high of 67 1/2. It achieved these earnings with propert os ue of some 2 1/2 million, and the company had no debt. In the ensuin ; perty has increased to over 40 million, but debt, at the end of December 6, w vel' 33 million. Deficits were incurred in every year be- tween 1957 and 1961, an e book value per common share has decreased from over 28 to a minus figure. The ck sold as low as 2 1/2 in 1961. Clearly, Seaboard's equipment purchases during the past decade have been somewhat less than profitable. There is, however, some evidence that the heavy investment of bor- rowed funds during the past ten years is beginning to bear some fruit. Seaboard, as a carg airline, engaged primarily in carrying freight across the north Atlantic, is a beneficiary of a stable rate structure, longer average flights, and high rates which are providing the com- pany with excellent yields per revenue ton mile. New routes will permit the company to serve Europe on an area basis at substantial savings in cost and improvements in utilization The CAB decision, if it stands, will also stimulate growth in volUIlE,The effect of all this on earnings could be dramatic. The leverage provided by Seaboard's huge debt is, after all, a two-edged sword. Just as leverage led to a dramatic collapse of earning power 111 the late 50's, it can lead to an equally dramatic improvement as equipment utilization improves. Indeed, some improve- ment has already been noted. Earnings have expanded from a deficit of 1. 08 in 1961 to 29 in 1962, 47 in 1963, and a projected 80 in 1964. Future expansion could be at an even greater rate. Obviously speculative, the shares, nonetheless, appear attractive for those individuals who are willing to assume substantial risk in return for the prospect of substantial gain. From a technical point of view, the stock has held in a narrow trading range since 1961. An ultima te upside would indicate considerably higher prices. Dow-Jones Ind. 829.16 Dow-Jones Rails 213.02 EDMUND W. TABELL WALSTON & CO. INC. ThiS market letter 19 not, and under no circumstances 18 to be construed as, an offer to sell or a solicitatIOn to buy any eeeUrltles referred to herem The Information ('untamed herem is not gUllranteed as to accuracy or completeness and the furRlshlng thereof 18 not. and under no circumstances 15 to be construed as, a repre!lenta- tlOn by Walston & Co, Inc All expreSSIOns of opmlon are subJect to change without notice Walston & Co, Inc, and Officers, Dlrcctors, Stockholders and Employees thereot, purchase, sell and may have an interest In the secUrities mentioned herein, ThlS market letter 18 Intended. and presented merely as a general, mformal comm.mtsry on day to dRY market news and not as a complete analYSIS AdditIOnal mformatlon With respect to any securllJes referred to herem will be furnished upon request WN .301