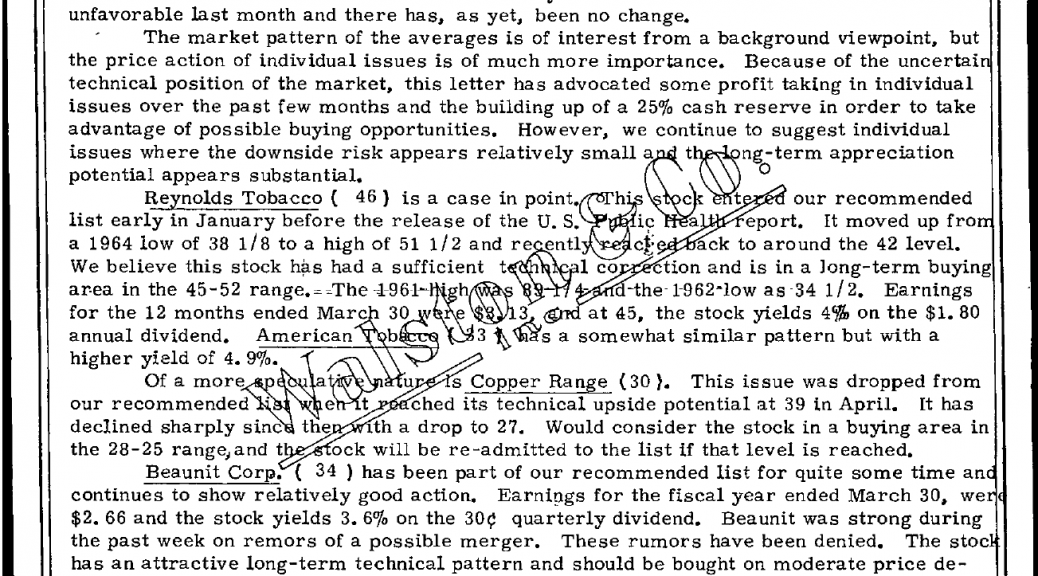 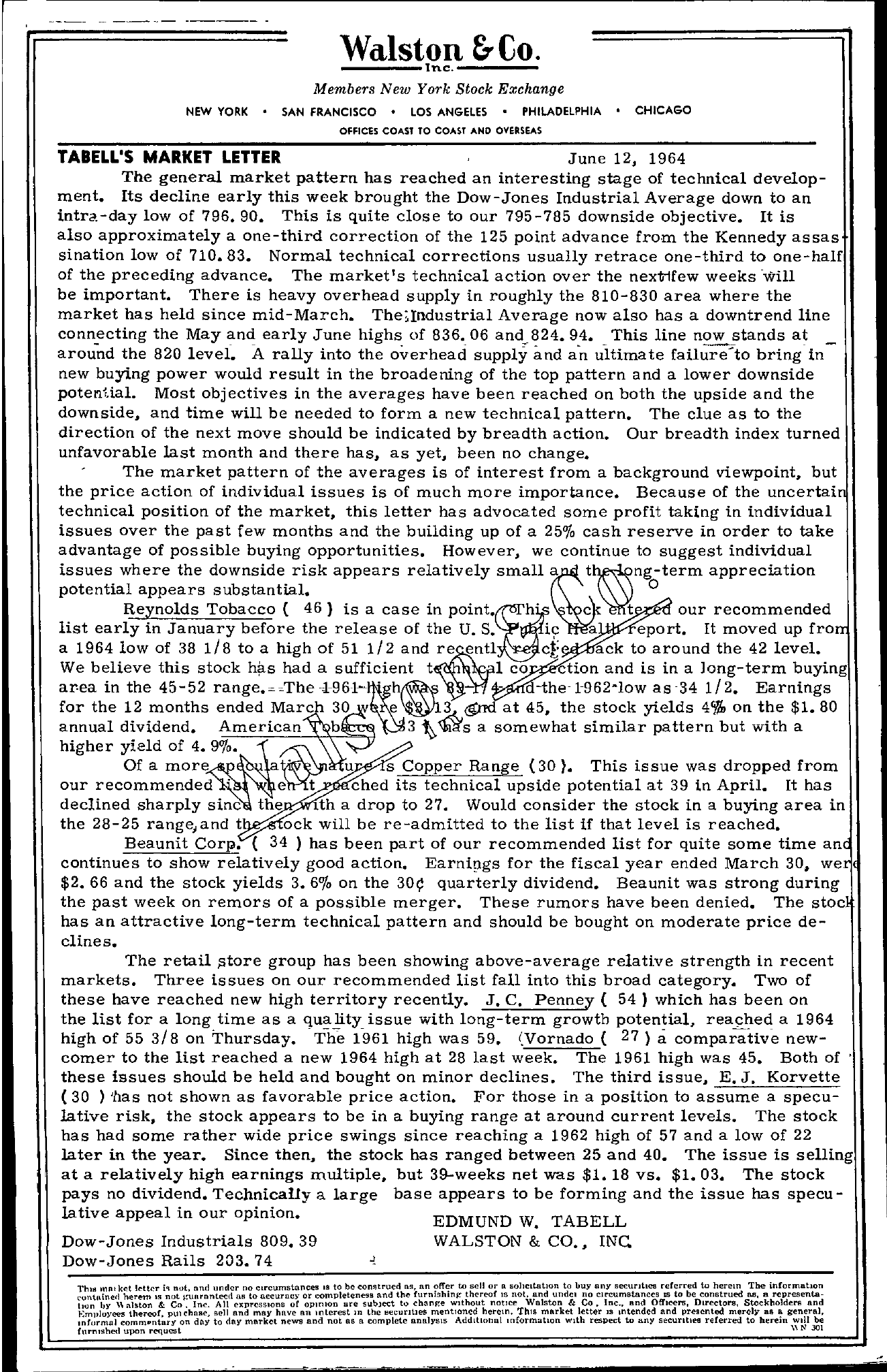 Walston &Co. Inc. Members New York Stock Exchange NEW YORK SAN FRANCISCO LOS ANGELES PHILADELPHIA CHICAGO OFFICES COAST TO COAST AND OVERSEAS TABELL'S MARKET LETTER June 12, 1964 The general market pattern has reached an interesting stage of technical develop- ment. Its decline early this week brought the Dow-Jones Industrial Average down to an intra.-day low of 796.90. This is quite close to our 795-785 downside objective. It is also approximately a one-third correction of the 125 point advance from the Kennedy assas sination low of 710.83. Normal technical corrections usually retrace one-third to one-half of the preceding advance. The market's technical action over the nextifew weeks will be important. There is heavy overhead supply in roughly the 810-830 area where the market has held since mid- March. The;rndustrial Average now also has a downtrend line connecting the May and early June highs of 836.06 and 824.94. This line now stands at around the 820 .A rally into the overhead supply and an ultimate failure-to bring in – new buying power would result in the broadening of the top pattern and a lower downside potential. Most objectives in the averages have been reached on both the upside and the downside, and time will be needed to form a new technical pattern. The clue as to the direction of the next move should be indicated by breadth action. Our breadth index turned unfavorable last month and there has, as yet, been no change. The market pattern of the averages is of interest from a background viewpoint, but the price action of individual issues is of much more importance. Because of the uncertai technical position of the market, this letter has advocated some profit taking in individual issues over the past few months and the building up of a 25 cash reserve in order to take advantage of possible buying opportunities. However, we continue to suggest individual issues where the downside risk appears relatively potential appears substantial. appreciation 0 Reynolds Tobacco ( 46) is a case in ct our recommended list early in January before the release of the U. S. a eport. It moved up fro a 1964 low of 38 1/8 to a high of 51 1/2 ent! cf ack to around the 42 level. We believe this stock hils had a sufficient t I co ction and is in a long-term buying -. – -the 1-962-lowas 341/2. Earnings for the 12 months ended March 30 e at 45, the stock yields 4'l on the 1.80 annual dividend. American b 3 a somewhat similar pattern but with a higher yield of 4. 9. Of a more . u s Copper Range (30). This issue was dropped from our recommended' etched its technical upside potential at 39 in April. It has declined sharply sinc th a drop to 27. Would consider the stock in a buying area in the 28-25 range, and t ock will be re-admitted to the list if that level is reached. Beaunit Corp. ( 34 ) has been part of our recommended list for quite some time an continues to show relatively good action. Earnirtgs for the fiscal year ended March 30, we 2. 66 and the stock yields 3.6 on the 30 quarterly dividend. Beaunit was strong during the past week on remors of a possible merger. These rumors have been denied. The stoc has an attractive long-term technical pattern and should be bought on moderate price de- clines. The retail ,store group has been showing above-average relative strength in recent markets. Three issues on our recommended list fall into this broad category. Two of these have reached new high territory recently. J. C. Penney ( 54) which has been on the list for a long time as a quality issue with long-term growth potential, reached a 1964 high of 55 3/8 on Thursday. The 1-961 high was 59. (Vornado ( 27) a comparative new- comer to the list reached a new 1964 high at 28 last week. The 1961 high was 45. Both of these issues should be held and bought on minor declines. The third issue, E. J. Korvette (30 ) 'has not shown as favorable price action. For those in a position to assume a specu- lative risk, the stock appears to be in a buying range at around current levels. The stock has had some rather wide price swings since reaching a 1962 high of 57 and a low of 22 later in the year. Since then, the stock has ranged between 25 and 40. The issue is selling at a relatively high earnings multiple, but 39-weeks net was 1. 18 vs. 1.03. The stock pays no dividend. Technically a large base appears to be forming and the issue has specu- lative appeal in our opinion. EDMUND W. TABELL Dow-Jones Industrials 809.39 WALSTON & CO., INC. Dow-Jones Rails 203.74 ThIll mnl kf!t letter not and under no Clrcumstunces IS to be construed lS. an offer to scll or II. sohcltatlOn to buy any sccurltil!8 referred to herein The informnbon l'ont\(incd herem IS not as to nccurnc' or completeness and the furnishing thereof 15 not, and undel no Circumstances IS to be construed as, a representa- tllln by \'nlston & Employees thereor, Co, Inc. pUlchnse. All sell expressions of opIniOn ure subject to ('hunge Without notice Walston & and may have an mterest 10 the securItIes mentIOned herein. This market Co. letter Inc.. and IS Intende dO fafnI cde rps ,r eDg ei rnetcetdo rms ,e rSetloyc ka sh o'!l' dgeer sn ear na ld, H1formnl comm..ntnry on dny to day market news and not as a complete analYSIS AddltlOnnl information With respect to any securities referred to herein Will be furnished upon request N J01