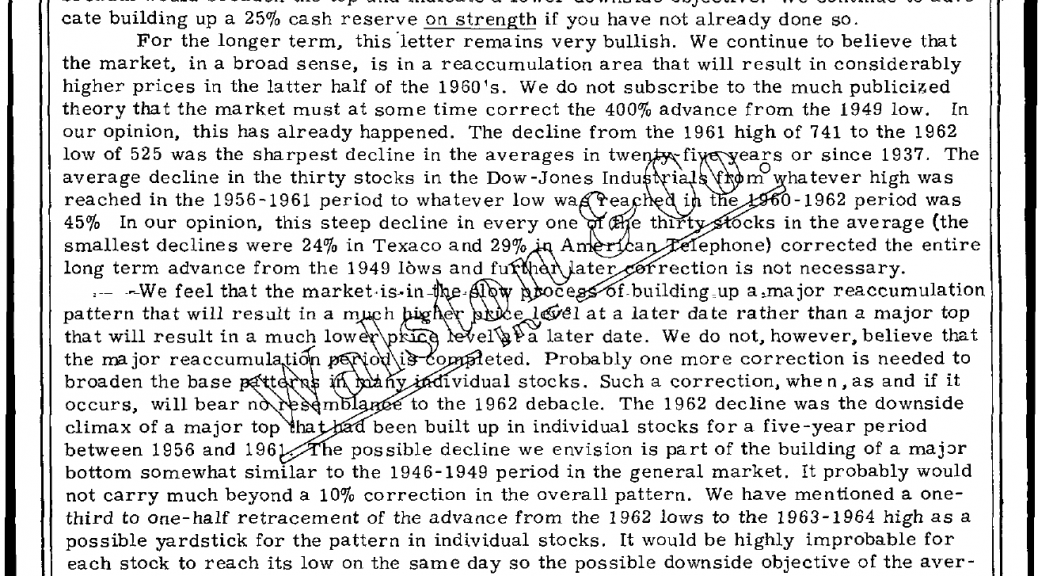 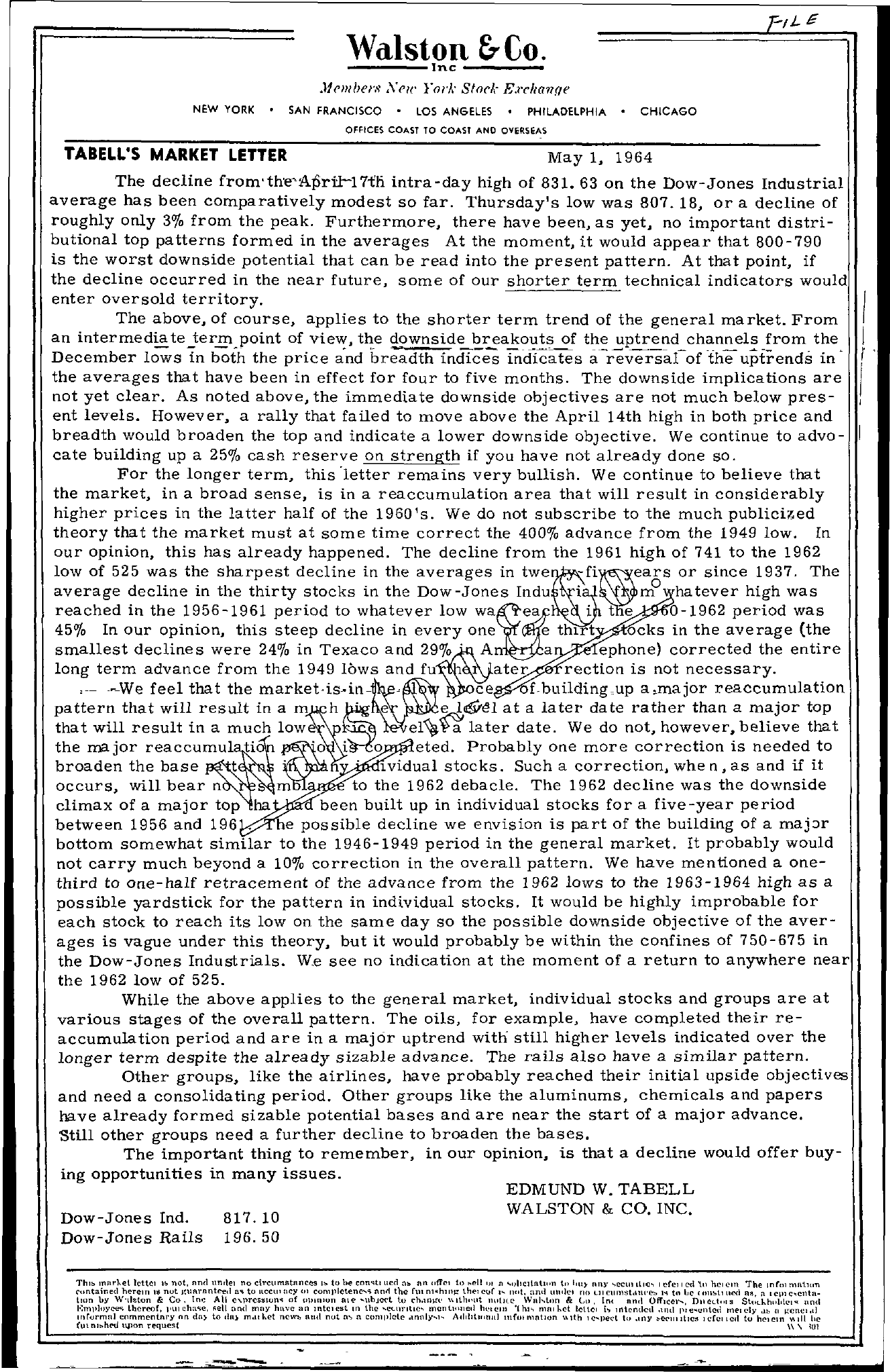 Walston &Co. Inc Jlrlll/Jer8 Sell' lol'k Stork E.lclial1ge NEW YORK SAN FRANCISCO LOS ANGELES PHILADELPHIA CHICAGO OFFICES COAST TO COAST ANO OVERSEAS TABELL'S MARKET LETTER May 1, 1964 The decline fromth'e-Aprtl-l7f1i intra-day high of 831. 63 on the Dow-Jones Industrial average has been comparatively modest so far. Thursday's low was 807.18, or a decline of roughly only 30/0 from the peak. Furthermore, there have been, as yet, no important distri- butional top patterns formed in the averages At the moment, it would appear that 800-790 is the worst downside potential that can be read into the present pattern. At that point, if the decline occurred in the near future, some of our shorter term technical indicators would Ienter oversold territory. The above, of course, applies to the shorter term trend of the general market. From an intermediate term point of view, the downside breakouts of the uptrend channels from the aDecember lo;s in both the price a'nd breadth indic;S reversal-of the- uptrends in' the averages that have been in effect for four to five months. The downside implications are IrI not yet clear. As noted above, the immediate downside objectives are not much below pres- ent levels. However, a rally that failed to move above the April 14th high in both price and breadth would broaden the top and indicate a lower downside obJective. We continue to advo- cate building up a 250/0 cash reserve on strength if you have not already done so. For the longer term, this letter remains very bullish. We continue to believe that the market, in a broad sense, is in a reaccumulation area that will result in considerably higher prices in the latter half of the 1960's. We do not subscribe to the much publici1ed theory that the market must at some time correct the 4000/0 advance from the 1949 low. In our opinion, this has already happened. The decline from the 1961 high of 741 to the 1962 low of 525 was the sharpest decline in the averages in average decline in the thirty stocks in the Dow -Jones Indu i or since 1937. The mO ha tever high was reached in the 1956-1961 period to whatever low i t e 0-1962 period was 450/0 In our opinion, this steep decline in everyone e thlrt ocks in the average (the smallest declines were 240/0 in Texaco and A a ephone) corrected the entire long term advance from the 1949 lows and fu ater rection is not necessary. ,—-We feel that the pattern that will result in a that will result in a much low 20the major tio i 0 ce f.building.up a,major reaccumulation e e 1&E!1 at a later date rather than a major top later date. We do not, however, believe that eted. Probably one more correction is needed to broaden the base t ' . 1vidual stocks. Such a correction, whe n , as and if it occurs, will bear n m to the 1962 debacle. The 1962 decline was the downside climax of a major top ha been built up in individual stocks for a five-year period between 1956 and 196. e possible decline we envision is part of the building of a majJr bottom somewhat similar to the 1946-1949 period in the general market. It probably would not carry much beyond a 100/0 correction in the overall pattern. We have mentioned a one- third to One- half retracement of the advance from the 1962 lows to the 1963 -1964 high as a possible yardstick for the pattern in individual stocks. It would be highly improbable for each stock to reach its low on the same day so the possible downside objective of the aver- ages is vague under this theory, but it would probably be within the confines of 750-675 in the Dow-Jones Industrials. W.e see no indication at the moment of a return to anywhere near the 1962 low of 525. While the above applies to the general market, individual stocks and groups are at various stages of the overall pattern. The oils, for example, have completed their re- accumulation period and are in a major uptrend with still higher levels indicated over the longer term despite the already sizable advance. The rails also have a similar pattern. Other groups, like the airlines, have probably reached their initial upside objectives and need a consolidating period. Other groups like the aluminums, chemicals and papers have already formed sizable potential bases and are near the start of a major advance. Still other groups need a further decline to broaden the bases. The important thing to remember, in our opinion, is that a decline would offer buy- ing opportunities in many issues. EDMUND W. TABELL Dow-Jones Ind. 817.10 WALSTON & CO. INC. Dow-Jones Rails 196. 50 Thn, not, lind unrlet no cirClimstRI1C(!S 1, to he COIl'tl lied 1'1' nn ,,!Tel 11) , n l)hCllntwl1 t 1111 nn)' Idell cd 't ht'lcm The lnrm mntwll ('untained herem IS not no; to UCCUl ncy (J) com)llctenC'; nntl the fill thE'! C(lr nt, an,l untie! flO Uf CUlllst.UH'C i'I til lIc (nn!tl ued Ill! a 1Clll tum hy \\dston &. Co, in'! All c,prCSl\lOn'l of O\JlnlOn me ubJc,t to Ch,lIlj!(' \\Lth.. ut utllC Wai-.tnn & l,,,, 1m an,1 OffICCl…. , DUCLt19 SttLkh,,!,lel .. lind Emlll,wceo; thcl'rof, i'l11cha;c, Rcll nod mlly hllvc IlO Intclc81 In the mentu\Ileti bt.'lcllI 'Ihl !l1lllhct leHel 1I11enticl! ,1I111 melely.1 n Inrurmal cnmmentnry nn to lin m.lthet new III1tI nut II., n c(lmlliete ,II1I1IY-.h A,lIhtmlwl lIlfUlmntH)n \\Ith IC-.)('.'t to .IIIY O-\)('1I11tlCl! lefelle,l to helcm \'0111 he (ut m .. ht'\l lIlIon request \\ \ ,01