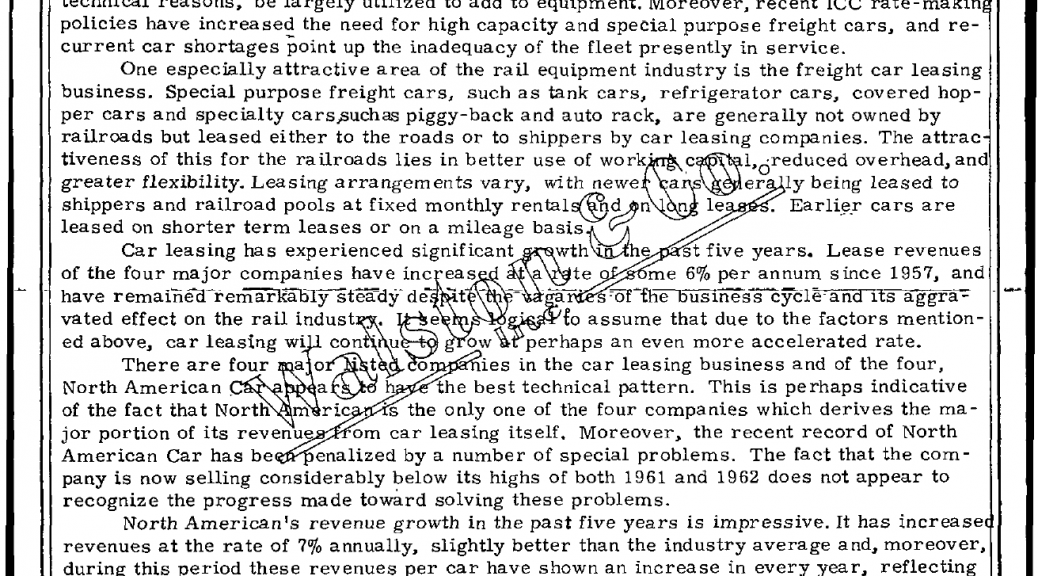 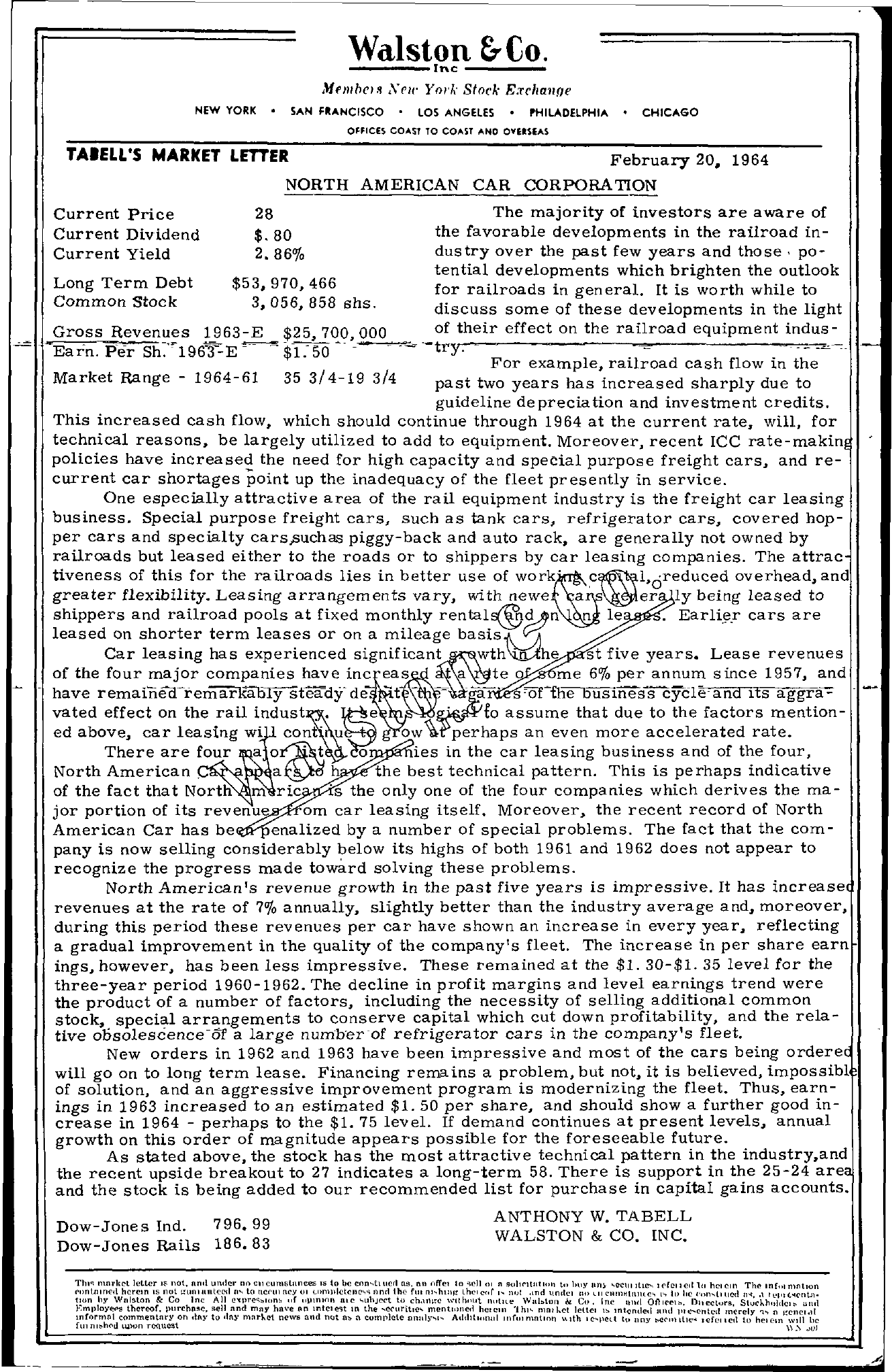 Walston &Co. ,\Iell/be,. Xrll' YnI'I.' Stnck Eulia1l(Je NEW YORK SAN FRANCISCO LOS ANGELES PHILADELPHIA CHICAGO OFF-ICES COAST TO COAST …. ND ovnSlAS TA.ELL'S MARKET LETTER February 20, 1964 NORTH AMERICAN CAR CORPORATION Current Price 28 The majority of investors are aware of Current Dividend Current Yield Long Term Debt Common Stock .80 2.860/0 53,970,466 3,056,858 ahs. the favorable developments in the railroad indus try over the past few years and those, potential developments which brighten the outlook for railroads in general. It is worth while to discuss some of these developments in the light Gross Revenues 1963-E -Earn. peer Market Range – 1964-61 25,700, 000 L50 353/4-193/4 of their effect on the railroad equipment indus-try. For example, railroad cash flow in the past two years has increased sharply due to guideline depreciation and investment credits. This increased cash flow, which should continue through 1964 at the current rate, will, for technical reasons, be largely utilized to add to equipment. Moreover, recent ICC rate-makin policies have the need for high capacity and special purpose freight cars, and re- current car shortages point up the inadequacy of the fleet presently in service. One especially attractive area of the rail equipment industry is the freight car leasing business. Special purpose freight cars, such as tank cars, refrigerator cars, covered hop- per cars and specialty cars,suchas piggy-back and auto rack, are generally not owned by railroads but leased either to the roads or to shippers by car leasing companies. The attrac tiveness of t.hi.s .for the lies in better of greater flex1b1hty. Leas1ng arrangements vary, Wl th newe a overhead, and ly being leased to shippers and railroad pools at leased on shorter term leases fixed monthly or on a mileage basiS1\ VA n Ie . EarlilT cars are Car leasing has experienced st five years. Lease revenues of the four major companies have have remaiiiecrremarKaOly f – a te me 6 per annum since 1957, and businesscyCleand 1tS aggra- vated effect on the rail . to assume that due to the factors mention- ed above, car leasing wi con' u g ow\ perhaps an even more accelerated rate. There are four a orMt 0 ies in the car leasing business and of the four, North American h the best technical pattern. This is perhaps indicative of the fact that NortH ric's the only one of the four companies which derives the ma- jor portion of its revenue om car leasing itself. Moreover, the recent record of North American Car has be enalized by a number of special problems. The fact that the com- pany is now selling considerably below its highs of both 1961 and 1962 does not appear to recognize the progress made toward solving these problems. North American's revenue growth in the past five years is impressive. It has increase revenues at the rate of 7 annually, slightly better than the industry average and, moreover, during this period these revenues per car have shown an increase in every year, reflecting a gradual improvement in the quality of the company's fleet. The increase in per share earn ings, however, has been less impressive. These remained at the 1. 30-1. 35 level for the three-year period 1960-1962. The decline in profit margins and level earnings trend were the product of a number of factors, including the necessity of selling additional common stock, special arrangements to conserve capital which cut down profitability, and the relative oDsolescenceof a large numherof refrigerator cars in the company's fleet. New orders in 1962 and 1963 have been impressive and most of the cars being ordere will go on to long term lease. Financing rema ins a problem, but not, it is believed, impossibl of solution, and an aggressive improvement program is modernizing the fleet. Thus, earnings in 1963 increased to an estimated 1. 50 per share, and should show a further good increase in 1964 – perhaps to the 1. 75 level. If demand continues at present levels, annual growth on this order of magnitude appears possible for the foreseeable future. As stated above, the stock has the most attractive technical pattern in the industry,and the recent upside breakout to 27 indicates a long-term 58. There is support in the 25-24 are and the stock is being added to our recommended list for purchase in capital gains accounts. Dow-Jones Ind. 796.99 Dow-Jones Rails 186.83 ANTHONY W. TABELL WALSTON & CO. INC. mnl'ket letter 1 no,' nne! under no ell cumstnnces IS to be cnn-.tlllcri ns, nn nffel In'll! II n sul1('ltntllll In huy lin llic-, I(rell e,ll., hel em The mfol mnllOn (',mtlllne,\ herein IS nut nllllll.lnteed n-. to IICC'lIlncy UI .. find the fill nhhlU!,! lh(e,r 1-. nt ,lIld IUHlel Un 1-' tu I,e ('nll',lllled 11..1 hy ' …. nlston & Co Inc All IIr IIpl111nn 1',mllloy(!,'S thereof, sell Ild mllY have on mtCle-t III the to, ch,III1!!' wlthut lllltlle, mentlllncd hel('lll Wnbtuf\ &. Co, nlathet leUe) IIn c m lind OOlce tenth..lnllti l , pl c nUcetu '('ntctl rs. me StucJ..h rely '1-. . .ldel UIH\ n J.cnel.ll mformni commentnry on ,iny to ,In) mnrJ..C!t news and nut m. n complete nnllly-.h Ad,htJII!1Il1 m(lmnllnn \\Ith IC'PNt III nny fm Illh('\u 1\J)tm request joTIcf(,'letl tu h(,lcln II h ….