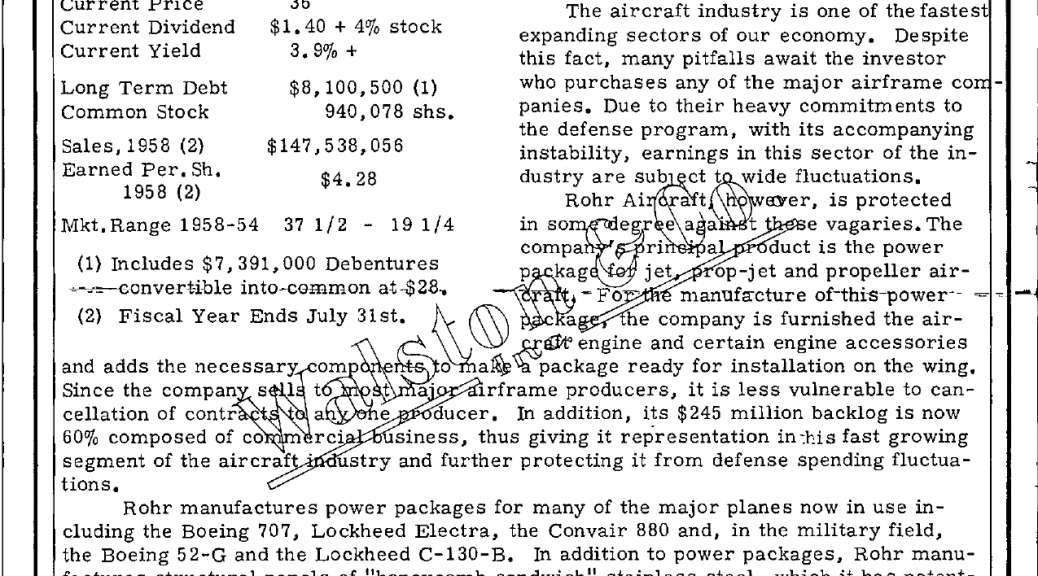 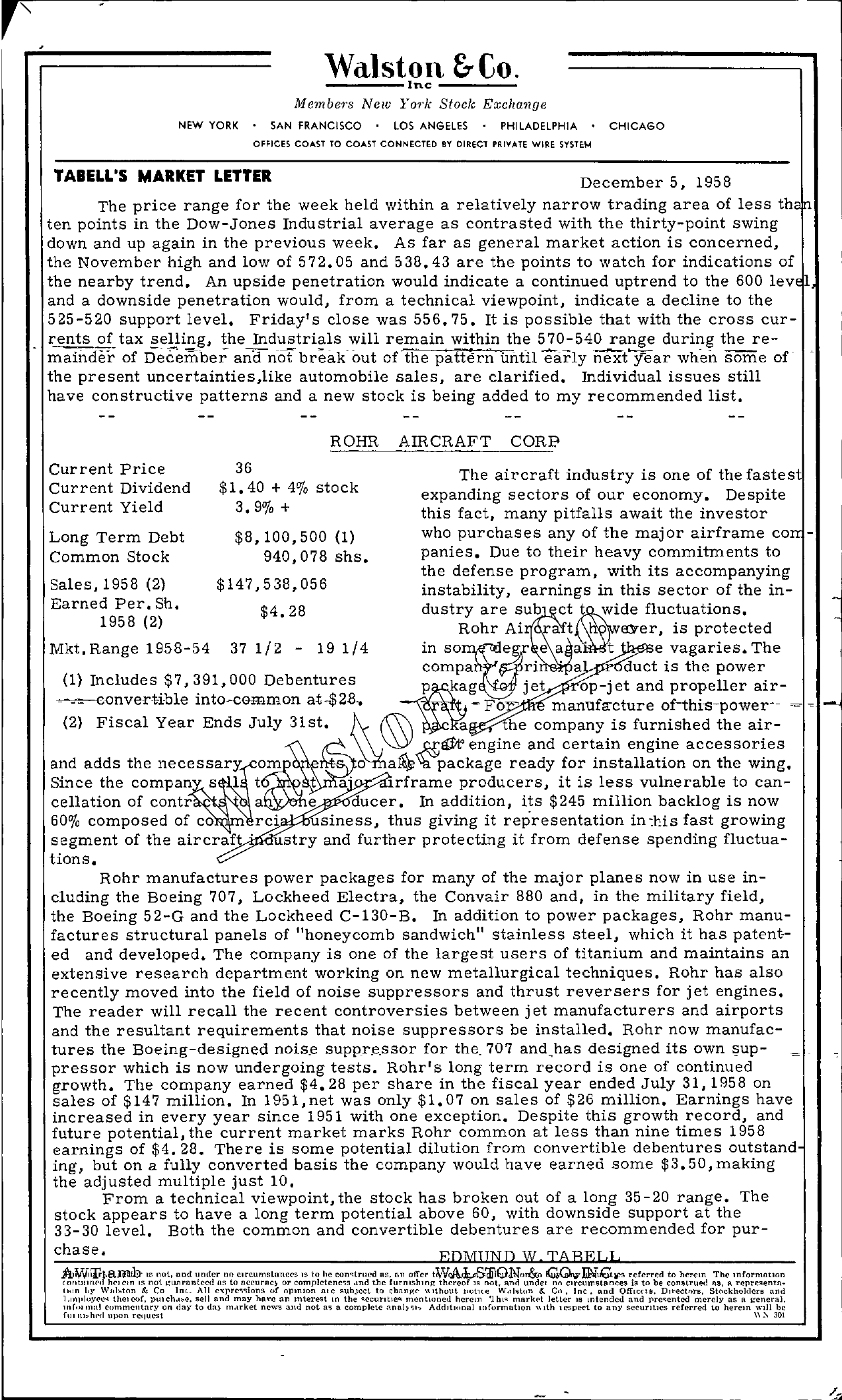 NEW YORK Walston &- Co. Inc Membe's New Y01'/c Stock Exchange SAN FRANCISCO LOS ANGELES PHILADELPHIA OFFICES COAST TO COAST CONNECTED BY DIRECT PRIVATE WIRE SYSTEM CHICAGO TABELL'S MARKET LETTER December 5, 1958 The price range for the week held within a relatively narrow trading area of less thc ten pOints in the Dow-Jones Industrial average as contrasted with the thirty-point swing down and up again in the previous week. As far as general market action is concerned, the November high and low of 572.05 and 538.43 are the points to watch for indications of the nearby trend. An upside penetration would indicate a continued uptrend to the 600 1 and a downside penetration would, from a technical viewpoint, indicate a decline to the 525-520 support level. Friday's close was 556.75. It is possible that with the cross cur- tax !he .will remain the durin/J t..!..!e- malnder of December and not break out of the pattern until early next year when some of- the present uncertainties,like automobile sales, are clarified. Individual issues still have constructive patterns and a new stock is being added to my recommended list. ROHR AIRCRAFT CORP Current Price Current Dividend Current Yield 36 1. 40 4 stock 3.9 The aircraft industry is one of the fastest expanding sectors of our economy. Despite this fact, many pitfalls await the investor Long Term Debt Common Stock Sales, 1958 (2) Earned Per. Sh. 1958 (2) 8,100,500 (I) 940,078 shs. 147,538,056 4.28 who purchases any of the major airframe corrpanies. Due to their heavy commitments to the defense program, with its accompanying instability, earnings in this sector of the in- dustry are Rohr Ai ra t fluctuations. rorer, is protected Mkt. Range 1958-54 37 1/2 – 191/4 Includes7, Debentures – mto common at-28.. in compa ;- e a a' t e vagaries. The ri' a duct is the power jet op-jet and air- rnanufacture of-thls-power– – (2) Fiscal Year Ends July 31st. company is furnished the air- W Aiitt' engine and certain engine accessories and adds the Since the compan sIt cellation of contr a 0 ready for installation on the wing. t a' lrframe producers, it is less vulnerable to cane Qucer. In addition, its 245 million backlog is now 60 composed of co rei usiness, thus giving it representation in tis fast growing segment of the aircraft' ustry and further protecting it from defense spending fluctua- tions. Rohr manufactures power packages for many of the major planes now in use in- cluding the Boeing 707, Lockheed Electra, the Convair 880 and, in the military field, the Boeing 52-G and the Lockheed C-130-B. In addition to power packages, Rohr manu- factures structural panels of honeycomb sandwich stainless steel, which it has patented and developed. The company is one of the largest users of titanium and maintains an extensive research department working on new metallurgical techniques. Rohr has also recently moved into the field of noise suppressors and thrust reversers for jet engines. The reader will recall the recent controversies between jet manufacturers and airports and the resultant requirements that noise suppressors be installed. Rohr now manufac- tures the Boeing-designed nois.e suppr.e.ssor for the. 707 andhas designed its own up- pressor which is now undergoing tests. Rohr's long term record is one of continued growth. The company earned 4.28 per share in the fiscal year ended July 31,1958 on sales of 147 million. In 1951,net was only 1.07 on sales of 26 million. Earnings have increased in every year since 1951 with one exception. Despite this growth record, and future potential, the current market marks Rohr common at less than nine times 1958 earnings of 4.28. There is some potential dilution from convertible debentures outstand ing, but on a fully converted basis the company would have earned some 3.50,making the adjusted multiple just 10. From a technical viewpoint, the stock has broken out of a long 35-20 range. The stock appears to have a long term potential above 60, with downside support at the 33-30 level. Both the common and convertible debentures are recommended for pur- chase. EDMUND W TARE!'!' AWWl-aJitUb.1S not, and under no CIrcumstances IS 10 he con;truw as, on offer referred to herem The InformatIOn (nnt'UIl('.1 hel('In 15 not J.l'unrnntced us to accurnc or completeness ..Ind the furnishing thereof IS not. and undc! no Clrcumstanccs is to be construed liS a rcpresentn e'l.thlll 'Y & Co JnL, All exprcllions of opmlOn lIe subJcct to \\Ithu\lt nutltc W,II;ton &. Inc, and Off!cne, DIrectors, and ,1ll1,uy,c-l thClcof, pUlch,le, sellnnd may havc an mterest In the l,curltlCq mcntuJncd herein 'lh!,. mark('t letter IS Intended and prelented merely as a general. lllrmmnl commentnry 011 dn' to dn m,lrket news and not as II complete nnnhsh AddltlnnailllforrnatlOn lth Icspeet to any securitIes referred to herem WIll be fUI lipan request \\ 301