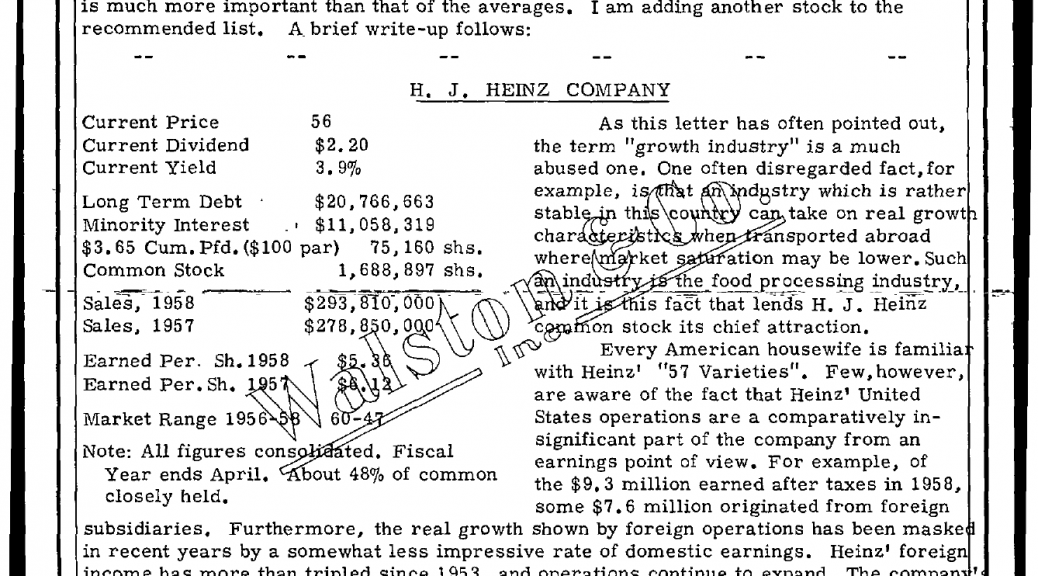 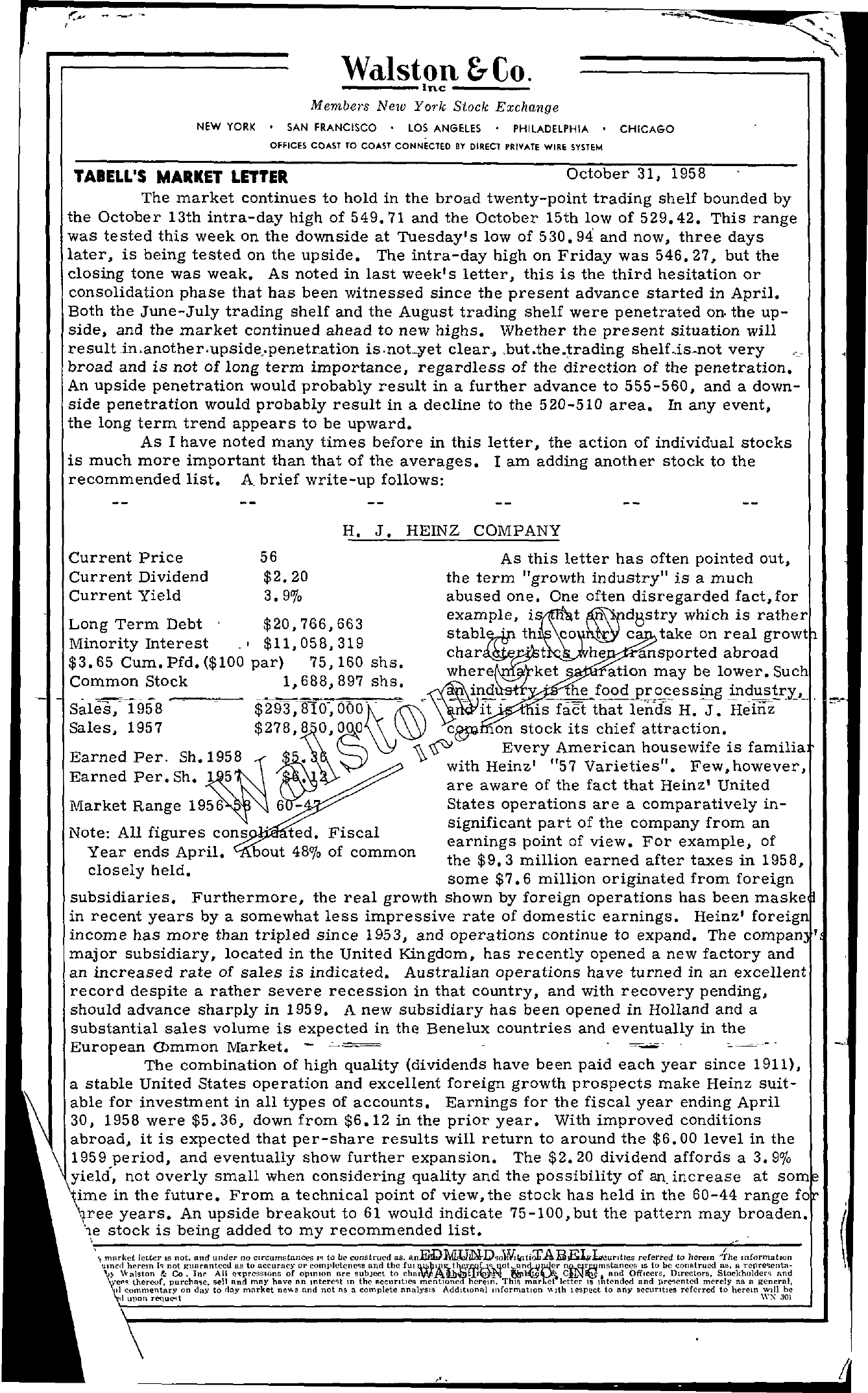 NEW YORK Walston &Co. – – – – – l n c – – Membe..s New YOTk Stock Exchange SAN FRANCISCO LOS ANGELES PHILADELPHIA OFFICES COAST TO COAST CONNECTED BY DIRECT PRIVATE WIRE SYSTEM CHICAGO TABELL'S MARKET LETTER October 31, 1958 The market continues to hold in the broad twenty-point trading shelf bounded by the October 13th intra-day high of 549.71 and the October 15th low of 529.42. This range was tested this week on the downside at Tuesday's low of 530.94 and now, three days later, is being tested on the upside. The intra-day high on Friday was 546.27, but the closing tone was weak. As noted in last week's letter, this is the third hesitation or consolidation phase that has been witnessed since the present advance started in April. Both the June-July trading shelf and the August trading shelf were penetrated on the up- side, and the market continued ahead to new highs. Whether the present situation will resultin.another.upside,.penetration is.noLyet clear .but.the.trading shelLis-Ilot very broad and is not of long term importance, regardless of the direction of the penetration. An upside penetration would probably result in a further advance to 555-560, and a down- side penetration would probably result in a decline to the 520-510 area. In any event, the long term trend appears to be upward. As I have noted many times before in this letter, the action of individual stocks is much more important than that of the averages. I am adding another stock to the recommended list. A brief write-up follows H. J. HEINZ COMPANY Current Price Current Dividend Current Yield 56 2.20 3.9 As this letter has often pointed out, the term growth industry is a much abused one. One often disregarded fact, for Long Term Debt 20,766,663 Minority Interest '11,058,319 3.65 Cum. Pfd. (100 par) 75,160 shs. Common Sto.ck Sales,- 1958 Sales, 1957 Earnedd Per. Sh Earne Per. 1, 688 , 897 sh s. 2 9 3 , 810-, r\\\ W '\\ 5 I exampl,e, which is rathe stabln-w t,hr co hhY ca take on real charW1t he, ansported abroad where ket atlon may be lower. Su d ' he f d ' J.WJU;'!-'y,d – ft ' is fact that len-d-s H. J. on stock its chief attraction. Every American housewife is J.al.lu.ua-r WI'th He'Inz , 57 Van'et 'Ies. F ew, however, are aware of the fact that Heinz' United Market Range 1956 6- States operations are a comparatively in- Not e All fI' gures cons t ed. FI' sca1 Y1ear IenhdsldApril. bout 48 of common C ose y e eSaigrnnIifnigcsa nt part pOlnt 0 fofv'tIheew c . oFmopraenxyafmropm1e , an0 f the 9 3 ml'III'On earned after t axes '1958 10 , some 7.6 million originated from foreign subsidiaries. Furthermore, the real growth shown by foreign operations has been maske in recent years by a somewhat less impressive rate of domestic earnings. Heinz' for income has more than tripled since 1953, and operations continue to expand. The cO.IDIlarIJf' major subsidiary, located in the United Kingdom, has recently opened a new factory and an increased rate of sales is indicated. Australian operations have turned in an record despite a rather severe recession in that country, and with recovery pending, should advance sharply in 1959. A new subsidiary has been opened in Holland and a substantial sales volume is expected in the Benelux countries and eventually in the European C!mmon Market. – …… ' – -,.' The combination of high quality (dividends have been paid each year since 1911), a stable United States operation and excellent foreign growth prospects make Heinz suit- able for investment in all types of accounts. Earnings for the fiscal year ending April 30, 1958 were 5.36, down from 6.12 in the prior year. With improved conditions abroad, it is expected that per-share results will return to around the 6.00 level in the 1959 period, and eventually show further expansion. The 2.20 dividend affords a 3.9 ld', not overly small when conSidering quality and the possibility of an, increase at e in the future. From a technical point of view, the stock has held in the 60-44 range years. An upside breakout to 61 would indicate 75-100, but the pattern may broaden. stock is being added to my recommended list. of OlltnlOn are mayan Interc'It m market nc\\.s and not flS a nnd as a general, hereLn wlll be WX 301