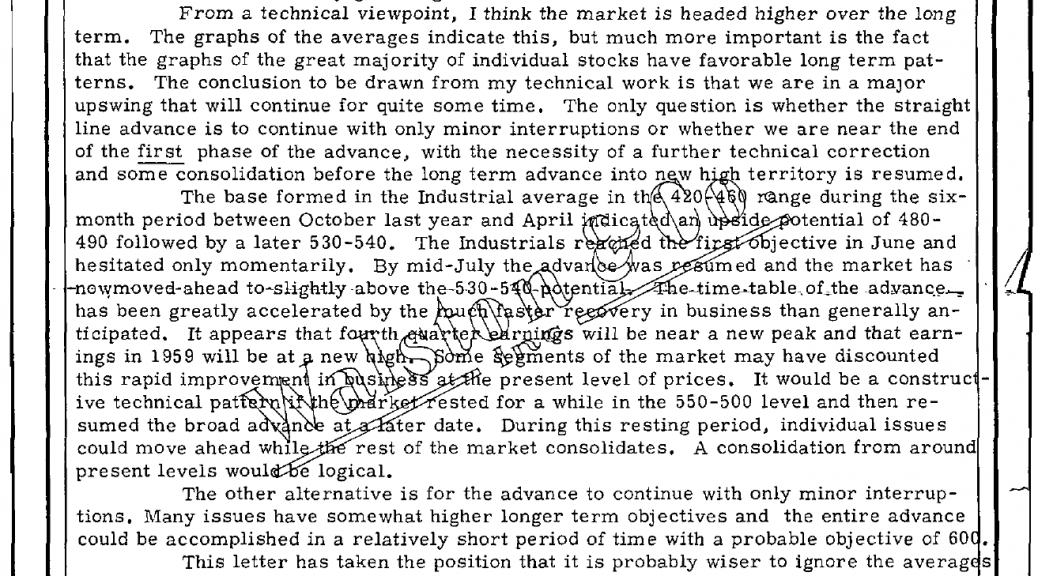 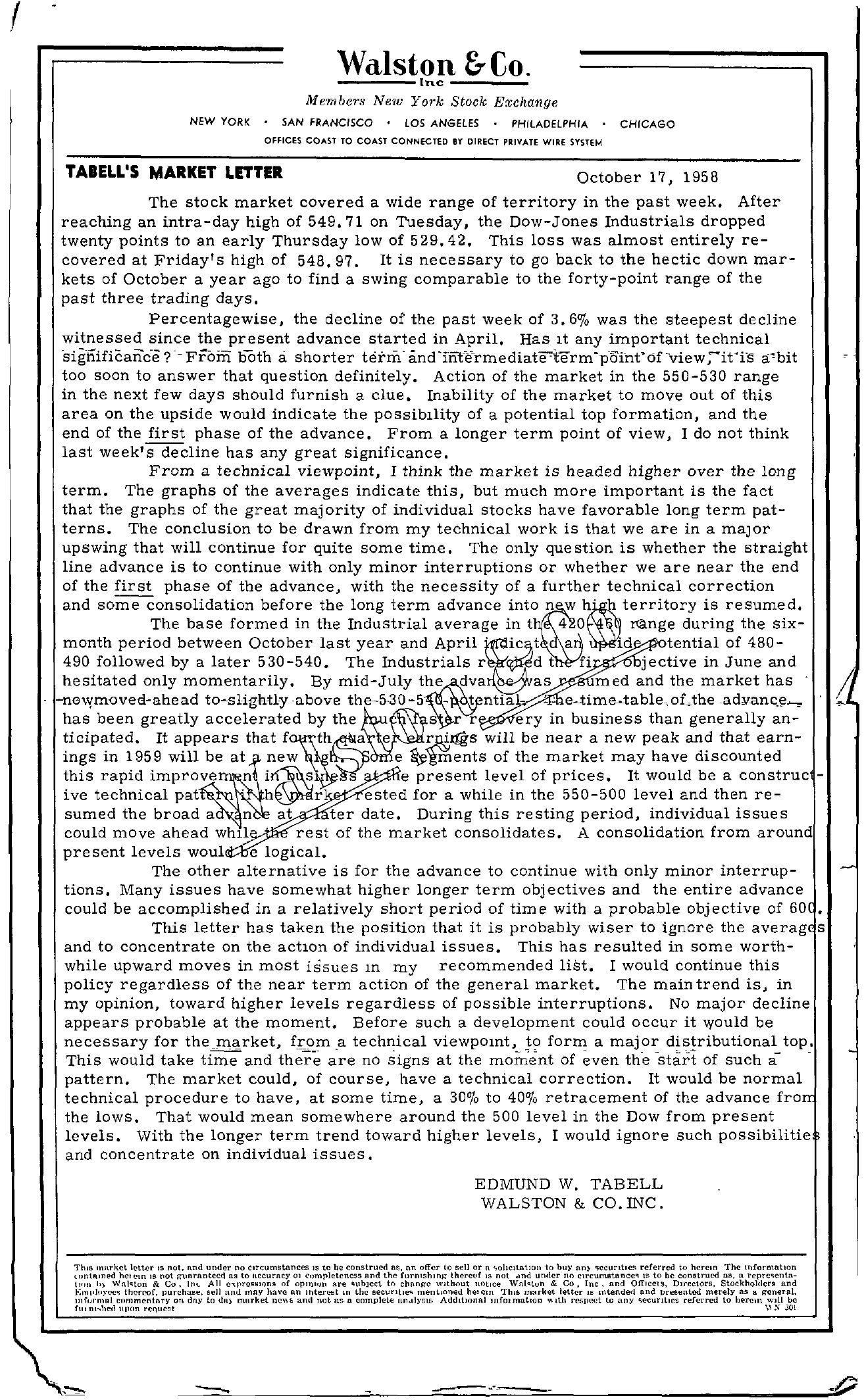 I NEW YORK Walston &- Co. Inc Members New York Stock Exchange SAN FRANCISCO LOS ANGELES PHilADELPHIA OFFICES COAST TO COAST CONNECTED BY DIRECT PRIVATE WIRE SYSTEM CHICAGO TABELL'S MARKET LETTER October 17, 1958 The stock market covered a wide range of territory in the past week. After reaching an intra-day high of 549.71 on Tuesday, the Dow-Jones Industrials dropped twenty pOints to an early Thursday low of 529.42. This loss was almost entirely re- covered at Friday's high of 548.97. It is necessary to go back to the hectic down mar- kets of October a year ago to find a swing comparable to the forty-point range of the past three trading days. Percentagewise, the decline of the past week of 3.6 was the steepest decline witnessed since the present advance started in April. Has it any important technical significanc-e- From both a shorter term' and -iilt'errmediate term-poiht'Of view;-itTS a'bit too soon to answer that question definitely. Action of the market in the 550-530 range in the next few days should furnish a clue. Inability of the market to move out of this area on the upside would indicate the possibility of a potential top formation, and the end of the first phase of the advance. From a longer term point of view, I do not think last week's decline has any great significance. From a technical viewpoint, I think the market is headed higher over the long term. The graphs of the averages indicate this, but much more important is the fact that the graphs of the great majority of individual stocks have favorable long term pat- terns. The conclusion to be drawn from my technical work is that we are in a major upswing that will continue for quite some time. The only que stion is whether the straight line advance is to continue with only minor interruptions or whether we are near the end of the first phase of the advance, with the necessity of a further technical correction and some consolidation before the long term advance The base formed in the Industrial average in t 4 0 is resumed. r.nge during the six- month period between October last year and April 490 followed by a later 530-540. The Industrials r hesitated only momentarily. By mid-July dva a Wd t as of 480jective in June and med and the market has' Ii -novl'moved-ahead to-sH-ghtl-y above the-5-30 -5 – t ntia – .' e-time.-table-.oCtheadanc.e…… – has been greatly accelerated by the ticipated. It appears that e r r ery in business than generally an- 9Ml1ls will be near a new peak and that earn- ings in 1959 at new this rapid improve n in5il\s e of the market may have discounted e present level of prices. It would be a construc – ive technical pat . for a while in the 550-500 level and then re- sumed the broad a n at ter date. During this resting period, individual issues could move ahead Whil rest of the market consolidates. A consolidation from around present levels woul e logical. The other alternative is for the advance to continue with only minor interrup- tions. Many issues have somewhat higher longer term objectives and the entire advance could be accomplished in a relatively short period of time with a probable objective of 60(. This letter has taken the position that it is probably wiser to ignore the averagE s and to concentrate on the actlOn of individual issues. This has resulted in some worth- while upward moves in most issues m my recommended list. I would continue this policy regardless of the near term action of the general market. The main trend is, in my opinion, toward higher levels regardless of possible interruptions. No major decline appears probable at the moment. Before such a development could occur it would be necessary for therna,rket, fr-om a technical viewpomt, to form a major distributional top. This would take time and there are no signs at the mon;'ent of even th'e 'start of such a- – pattern. The market could, of course, have a technical correction. It would be normal technical procedure to have, at some time, a 300/0 to 40 retracement of the advance froIT the lows. That would mean somewhere around the 500 level in the Dow from present levels. With the longer term trend toward higher levelS, I would ignore such possibilitie and concentrate on individual issues. EDMUND W. TABELL WALSTON & CO. INC. ThiS market It'ttcr 15 not, nnd under no Circumstances IS to be construed as, nn offer to sell or n 'OilCltatlon to buy nn) 'CCUrltIC5 referred to herein The Information umtnmed hel em IS not gunrnntcc(j as to nccurncy 01 (1)rnllletcncss and the furnIshing thereof lS not .md under no IS to be construed as, It \u,u h & Co. hlL All C'(prCS910ns of oPInIOn nre '1ubecl to chnnJ!C WIthout 1l0tlce WnI ton & Co. Inc, and QITlee15, DIrectors, Stockholders and thercof, purchase, sellnnd may have an Interest In the seCUrltJe; mentioned helcln ThiS market letter IS mtended and presented merely as 8 general, lllfurlllltl eommentnry on dn)' to da market nc\\!, ami not as a complete an.dysls Addltlonnl lllfOimatlon \\lth respect to nny ;ecuntles referred to herem WIll btl IIpon request \,;.; 301