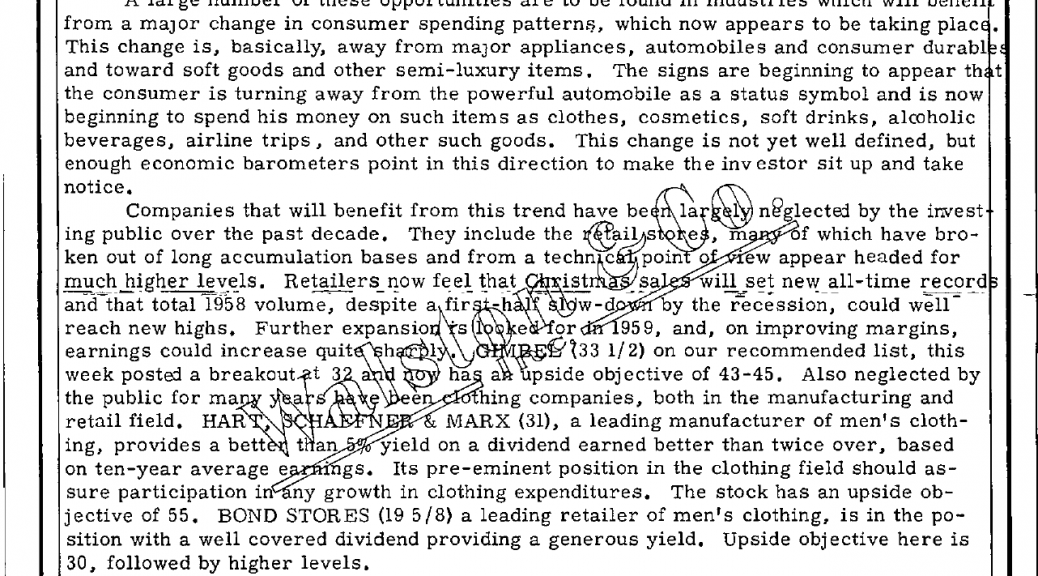 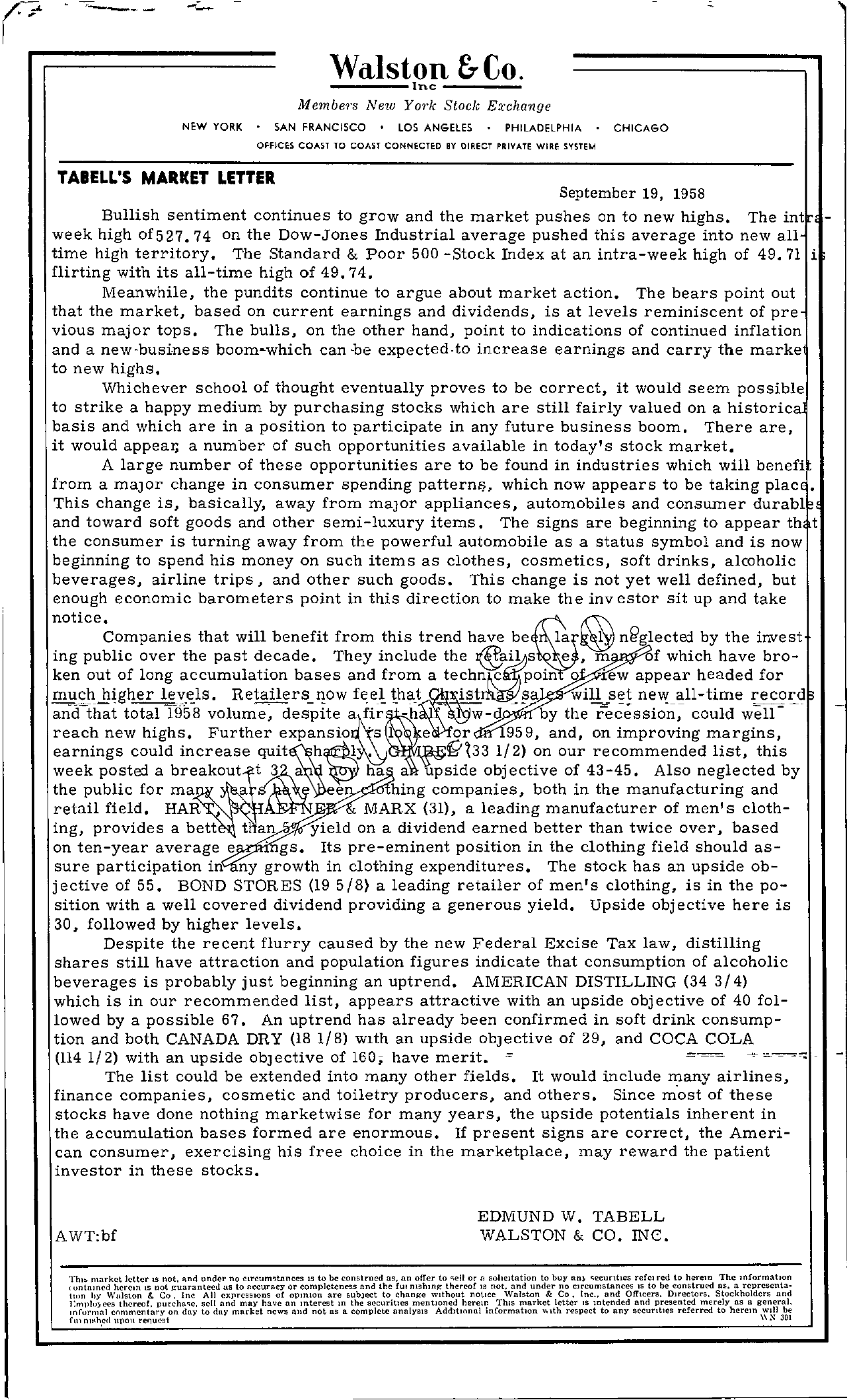 -….. NEW YORK Wdlston &Co. Inc Membe1'S Ne,u Y01'k Stock El'clwrlge SAN FRANCISCO LOS ANGELES PHILADELPHIA OFFICES COAST TO COAST CONNECTED BY DIRECT PRIVATE WIRE SYSTEM CHICAGO TABELL'S MARKET LETTER September 19, 1958 Bullish sentiment continues to grow and the market pushes on to new highs. The intr. week high of527. 74 on the Dow-Jones Industrial average pushed this average into new alltime high territory. The Standard & Poor 500 -Stock Index at an intra-week high of 49.71 i flirting with its all-time high of 49. 74. Meanwhile, the pundits continue to argue about market action. The bears point out that the market, based on current earnings and dividends, is at levels reminiscent of pre vious major tops. The bulls, on the other hand, point to indications of continued inflation and a new-business can -be expected,to increase earnings and carry the marke to new highs. Whichever school of thought eventually proves to be correct, it would seem possible to strike a happy medium by purchasing stocks which are still fairly valued on a historica basis and which are in a position to participate in any future business boom. There are, it would appear, a number of such opportunities available in today's stock market. A large number of these opportunities are to be found in industries which will benefi from a maJor change in consumer spending patternEl, which now appears to be taking placE. This change is, basically, away from maJor appliances, automobiles and consumer durabl and toward soft goods and other semi-luxury items. The signs are beginning to appear th t the consumer is turning away from the powerful automobile as a status symbol and is now beginning to spend his money on such items as clothes, cosmetics, soft drinks, alcoholic beverages, airline trips, and other such goods. This change is not yet well defined, but enough economic barometers point in this direction to make th e investor sit up and take noticeCompanies that will benefit from this trend have ngglectejbytheinvest ing public over the past decade. They include the s e, m of which have bro- ken out of long accumulation bases and from a techn c poin 0 'ew appear headed for mllh..higher l;e;e)s. ist E'a willLse! ne,aI1-time and that total 1958 volume, despite reach new highs. Further expansio 's w-d by the recession, could well e or 959, and, on improving margins, earnings could increase !!ft33 1/2) on our recommended list, this week posted a the public for ma a ha a upside objective of 43-45. Also neglected by e hing companies, both in the manufacturing and retail field. HAR 0;; MARX (31), a leading manufacturer of men's cloth- ing, provides a bett t an yield on a dividend earned better than twice over, based on ten-year average e gs. Its pre-eminent position in the clothing field should as- sure participation in ny growth in clothing expenditures. The stock has an upside ob- jective of 55. BOND STORES (19 5/8) a leading retailer of men's clothing, is in the po- sition with a well covered dividend providing a generous yield. Upside objective here is 30, followed by higher levels. Despite the recent flurry caused by the new Federal Excise Tax law, distilling shares still have attraction and population figures indicate that consumption of alcoholic beverages is probably just beginning an uptrend. AMERICAN DISTILLING (34 3/4) which is in our recommended list, appears attractive with an upside objective of 40 fol- lowed by a possible 67. An uptrend has already been confirmed in soft drink consump- tion and both CANADA DRY (18 1/8) WIth an upside obJective of 29, and COCA COLA (1141/2) with an upside obJective of 160; have merit. – — – The list could be extended into many other fields. It would include many airlines, finance companies, cosmetic and toiletry producers, and others. Since most of these stocks have done nothing marketwise for many years, the upside potentials inherent in the accumulation bases formed are enormous. If present signs are correct, the Ameri- can consumer, exercising his free choice in the marketplace, may reward the patient investor in these stocks. AWTbf EDMUND W. TABELL WALSTON & CO. INC. Thb IHark(!llcttCT 15 not, nnd under no 15 to be construed as, an offer to or n soliCitation to buy nil) ;ccuntles refel red to herem The mformatlon (untamf'd herem IS not J!U1lranteed as to accuracy or completeness and the fUI nlshlflJ! thereof IS not. and under no cIrcumstances IS to be eonstrued os. a representa- tum lIy Yo'iliston &. Co, Inc All expressIons of OI)nIOn ore subJect to chonge WIthout nollce Walston & Co. Inc., and OffIcers, DIrectors, Stockholdcrs and lmpluet's thereof, sell and moy have an mterest In the mentIOned herem ThiS market letter IS Intended and presented merely os II. general, Illrul'mai cnmmentary on day to day market news 81ld not as a complete analYSIS AddItional information \Hth respect to ony securItIes referred to herem Will bf! fUl m ..h,cd IIPOII ref')uest \\ 3Dl