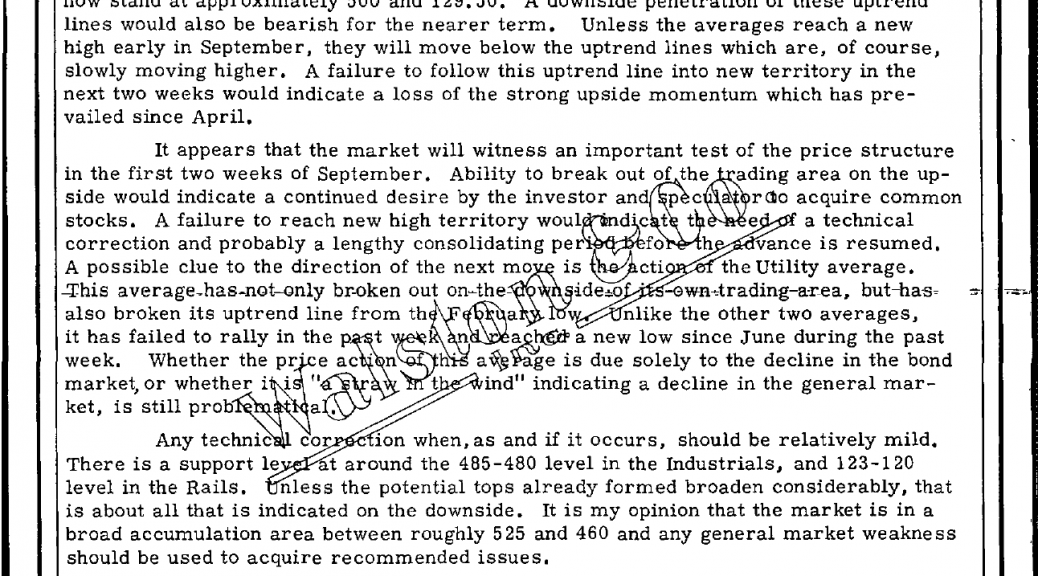 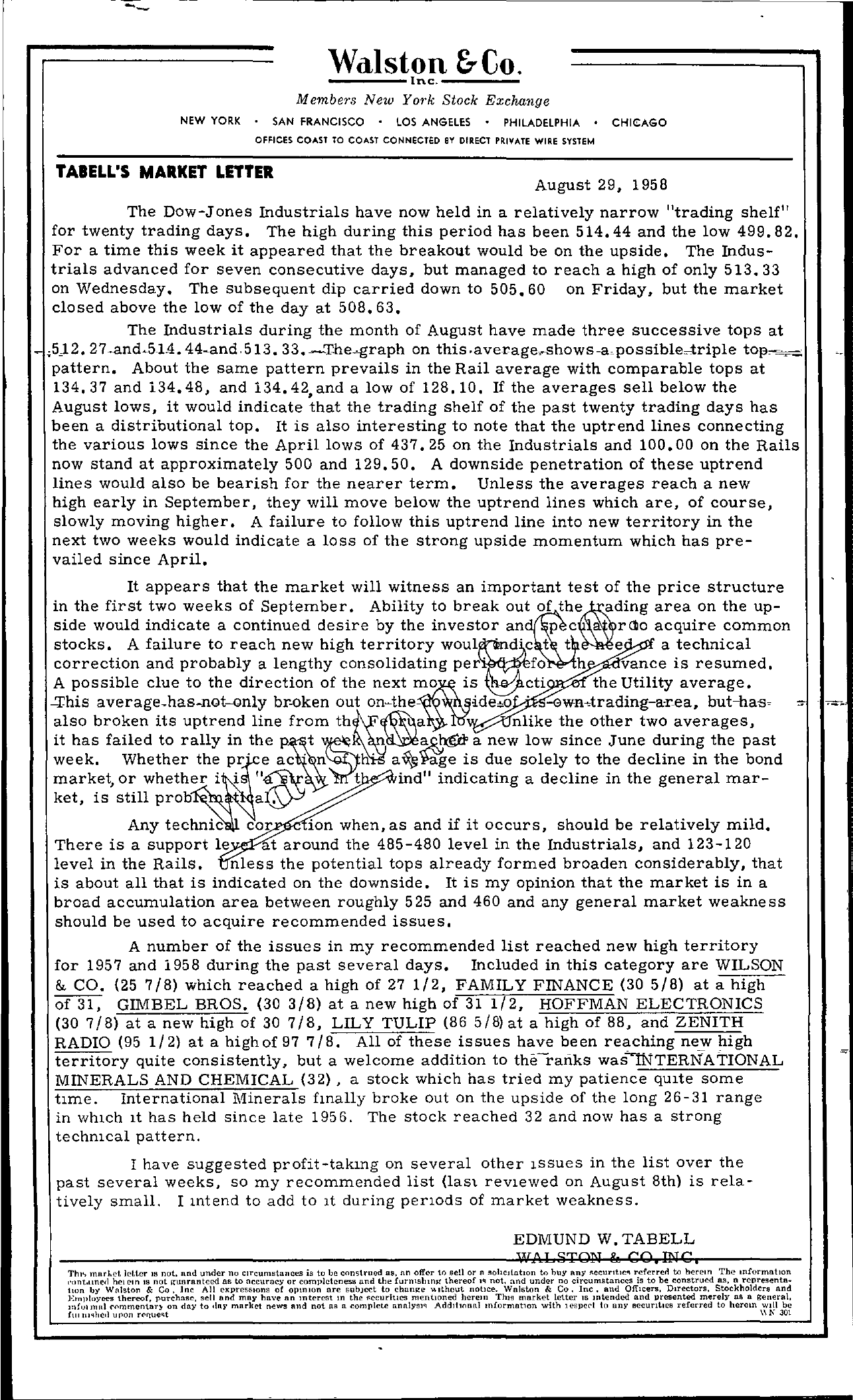 NEW YORK W—d-l-sItnocn.-&-C–o-. Memben New York Stock EXchange SAN FRANCISCO LOS ANGELES PHILADELPHIA OFFICES COAST TO COAST CONNECTED BY DIRECT PRIVATE WIRE SYSTEM CHICAGO fABELL'S MARKET LETTER August 29, 1958 The Dow-Jones Industrials have now held in a relatively narrow trading shelf for twenty trading days. The high during this period has been 514.44 and the low 499.82. For a time this week it appeared that the breakout would be on the upside. The Industrials advanced for seven consecutive days, but managed to reach a high of only 513.33 on Wednesday. The subsequent dip carried down to 505.60 on Friday, but the market closed above the low of the day at 508.63. The Industrials during the month of August have made three successive tops at A12. 27and.5L4. 44-and. 513. 33. on this -a.possibletriple top pattern. About the same pattern prevails in the Rail average with comparable tops at 134.37 and 134.48, and 134.42,and a low of 128.10. If the averages sell below the August lows, it would indicate that the trading shelf of the past twenty trading days has been a distributional top. It is also interesting to note that the uptrend lines connecting the various lows since the April lows of 437.25 on the Industrials and 100.00 on the Rails now stand at approximately 500 and 129.50. A downside penetration of these uptrend lines would also be bearish for the nearer term. Unless the averages reach a new high early in September, they will move below the uptrend lines which are, of course, slowly moving higher. A failure to follow this uptrend line into new territory in the next two weeks would indicate a loss of the strong upside momentum which has pre- vailed since April. It appears that the market will witness an important test of the price structure in the first two weeks of September. Ability to break area on the up- side would indicate a continued desire by the investor and p c a rdio acquire common stocks. A failure to reach new high territory t t e a technical correction and probably a lengthy consolidating h vance is resumed. A possible clue to the direction of the next -This averagehasnotonly br-oken out the Utility average. ide,o' -ewlhtrading-ar-ea, but-has- . – -. also broken its uptrend line from nlike the other two averages, it has failed to rally in the a new low since June during the past week. Whether the pro e ac . n ll' is due solely to the decline in the bond market, or whether i t indIO indicating a decline in the general mar- ket, is still prob aw cor ion when, as and if it occurs, should be relatively mild. There is a support Ie at around the 485-480 level in the Industrials, and 123-120 level in the Rails. nless the potential tops already formed broaden considerably, that is about all that is indicated on the downside. It is my opinion that the market is in a broad accumulation area between roughly 525 and 460 and any general market weakness should be used to acquire recommended issues. A number of the issues in my recommended list reached new high territory for 1957 and 1958 during the past several days. Included in this category are WILSON & CO. (257/8) which reached a high of 271/2, FAMILY FINANCE (30 5/8) at a high of 31, GIMBEL BROS. (30 3/8) at a new high of 31 1/2, HOFFMAN ELECTRONICS (307/8) at a new high of 307/8, LILY TULIP (86 5/8) at a high of 88, and ZENITH RADIO (951/2) at a high of 97 7/8. All of these issues have been reaching ne.Y' high territory quite consistently, but a welcome addition to TIONAL MINERALS AND CHEMICAL (32), a stock which has tried my patience qUlte some hme. International Minerals fmally broke out on the upside of the long 26-31 range in which It has held since late 1956. The stock reached 32 and now has a strong techmcal pattern. I have suggested profit-takmg on several other Issues in the list over the past several weeks, so my recommended list (last reviewed on August 8th) is relatively small. I mtend to add to It during periods of market weakness. EDMUND W. TABELL l,u.. Is5TOJT ie CO, lWe, Thl' mnrhet letter IS not, nnd under no Circumstances is to be COn'ltrued HS, nn offer to sell or n sohcIlation to buy any !';CCUrltIC'I referred to herem The infOrmatIOn ,'ont,uncd hel em IS not g'ullrantcei as to accuracy or completeness and the furnlshln).!' thereof 1'1 not, and under no cireumstances is to be construed as, II, rcpresenta. tum by Walston & Co, lnc All expressIOns of OPInion are subject to chllnlie \\Ithout notice. Walston & Co, Inc, and Officers, Directors, Stockholders and Emlluyees thereof, purchasc, scll and mlly have an mterest m the IccuritlCS mentioned herem ThiS market letter IS mtended and presented merely as Il general, 1ll!1)1 mill ('fmmentar) on dny to ,Iny market news and not us a complete AddltlOnni mlormntlon with lespcd to any seCUritIes referred to hcrcm Will be upon N 301