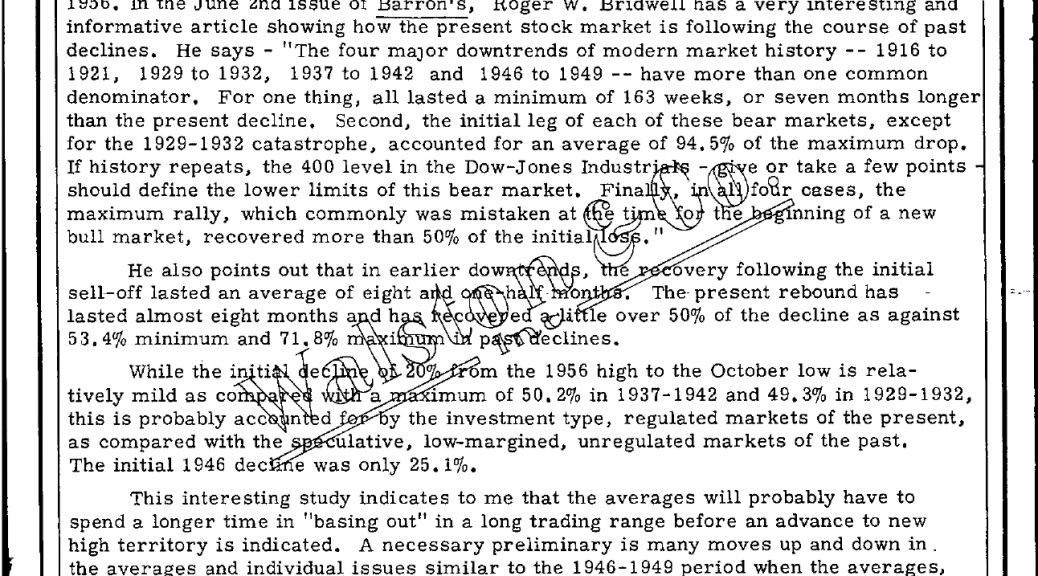 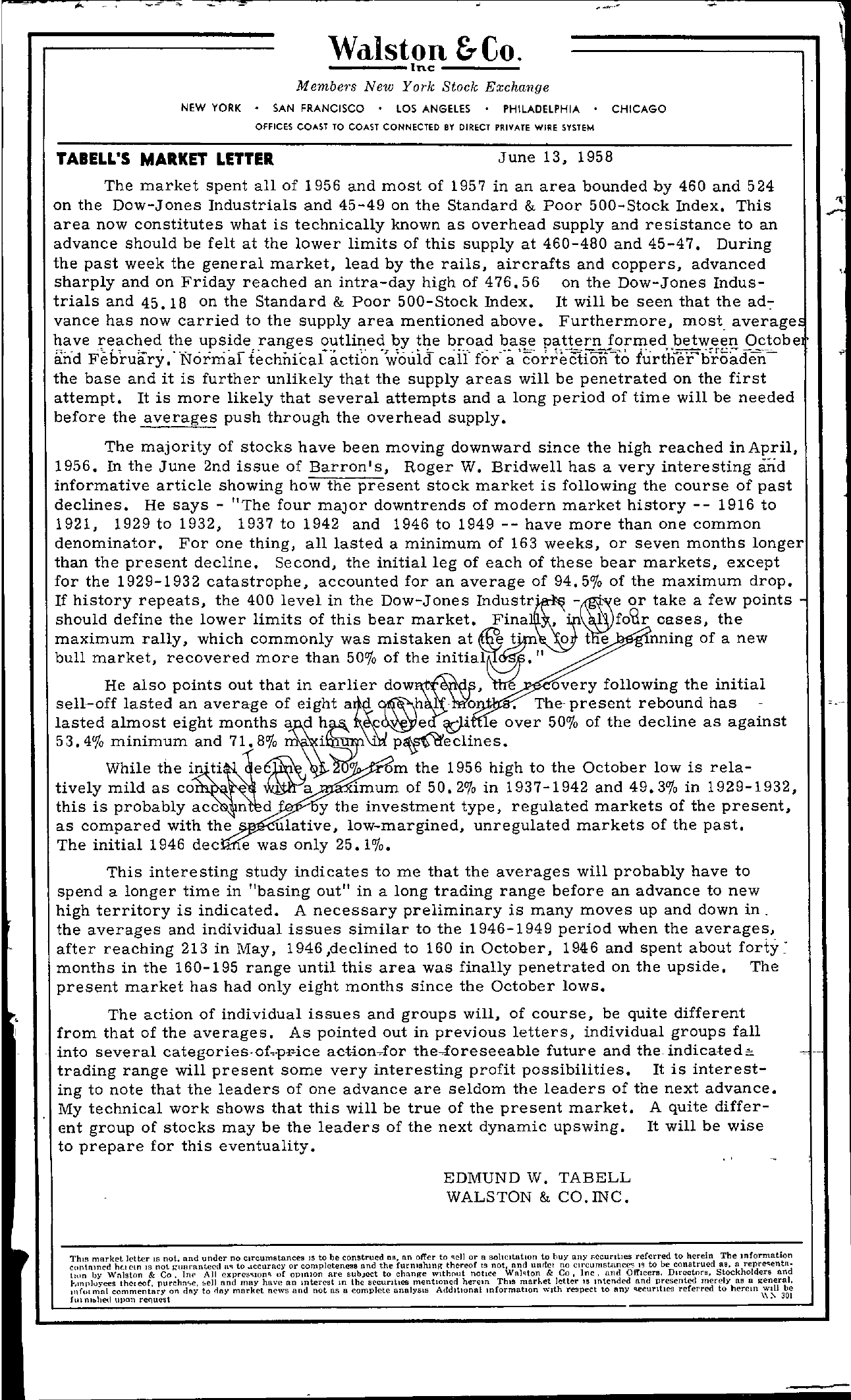 NEW YORK W—-a–l-s-tIoncn–&–C–o–. MembeTS New York Stock Exchange SAN FRANCISCO LOS ANGELES PHILADELPHIA OFFICES COAST TO COAST CONNECTED BY DIRECT PRIVATE WIRE SYSTEM CHICAGO TABELL'S MARKET LETTER June 13, 1958 The market spent all of 1956 and most of 1957 in an area bounded by 460 and 524 on the Dow-Jones Industrials and 45-49 on the Standard & Poor 500-Stock Index. This area now constitutes what is technically known as overhead supply and resistance to an advance should be felt at the lower limits of this supply at 460-480 and 45-47. During the past week the general market, lead by the rails, aircrafts and coppers, advanced sharply and on Friday reached an intra-day high of 476.56 on the Dow-Jones Industrials and 45.18 on the Standard & Poor 500-Stock Index. It will be seen that the advance has now carried to the supply area mentioned above. Furthermore, most average have reached the upside ranges outlined by the broad base pattern formed between Octobe and February.' 'Normal technicaiaction'\v'otilci cail' fora 'corie6tiori-to the base and it is further unlikely that the supply areas will be penetrated on the first attempt. It is more likely that several attempts and a long period of time will be needed before the averages push through the overhead supply. The majority of stocks have been moving downward since the high reached in April, 1956. In the June 2nd issue of Barron's, Roger W. Bridwell has a very interesting and informative article showing how the present stock market is following the course of past declines. He says – The four maJor downtrends of modern market history — 1916 to 1921, 1929 to 1932, 1937 to 1942 and 1946 to 1949 — have more than one common denominator. For one thing, all lasted a minimum of 163 weeks, or seven months longer than the present decline. Second, the initial leg of each of these bear markets, except for the 1929-1932 catastrophe, accounted for an average of 94.5 of the maximum drop. If history repeats, the 400 level in the Dow-Jones e or take a few pOints should define the lower limits of this bear market. Fina I fo'Ur ca.ses, the maximum rally, which commonly was mistaken at .!4n 0 t enning of a new bull market, recovered more than 50 of the He also pOints out that in earlier 'fu overy following the initial sell-off lasted an average of eight . 0 The present rebound has lasted almost eight months 53.4'1aminimumand71.8 i ' Ie over 50 of the decline as against While the ig.ti m the 1956 high to the October low is rela- tively mild as co imum of 50.2 in 1937-1942 and 49.3 in 1929-1932, this is probably acc n d y the investment type, regulated markets of the present, as compared with the ulative, low-margined, unregulated markets of the past. The initial 1946 dec e was only 25.1. This interesting study indicates to me that the averages will probably have to spend a longer time in basing out in a long trading range before an advance to new high territory is indicated. A necessary preliminary is many moves up and down in. the averages and individual issues similar to the 1946-1949 period when the averages, after reaching 213 in May, 1946 ,declined to 160 in October, 1946 and spent about forty months in the 160-195 range until this area was finally penetrated on the upside. The present market has had only eight months since the October lows. The action of individual issues and groups will, of course, be quite different from that of the averages. As pOinted out in previous letters, individual groups fall into several categoriesofpl'-ice future and the. indicated '- trading range will present some very interesting profit possibilities. It is interest- ing to note that the leaders of one advance are seldom the leaders of the next advance. My technical work shows that this will be true of the present market. A quite differ- ent group of stocks may be the leaders of the next dynamic upswing. It will be wise to prepare for this eventuality. EDMUND W. TABELL WALSTON & CO.INC. , ThiS mllrket letter IS not. nnd under no Circumstances IS to be construed !lB, nn offer to 'lell or It soliCitatIOn to buy any r;c('untles referred to herein The mformation cunlnmcd hc.t em IS not gullrantccd 11'1 to .lccurllcy or cowplctenlSS Ilnd the furnlshmg' ther(Of IS not, nnd unrlel no Clrcumstnncll to be construed as, fI repre-;entn. tHIn by 'nlston & Co. 1m' All expres'IlOn! of oPinion are subJcct to chnnge Without WaJ'Iton & Co, Inc, und Officers. Directors, Stockholders and r,mpluyees thcleof. purchn,e, nnd may have an mterest m the securities mentIOned herem ThiS maret Ictter IS Intended and presented merely as a general, 111ft! mnl commentary on day to 'lny market news and not ns a complete analySIS Addltlonal mformnhon With respect to any !ecurltles referred to herem Will be fUI tlllOll request \\ 301