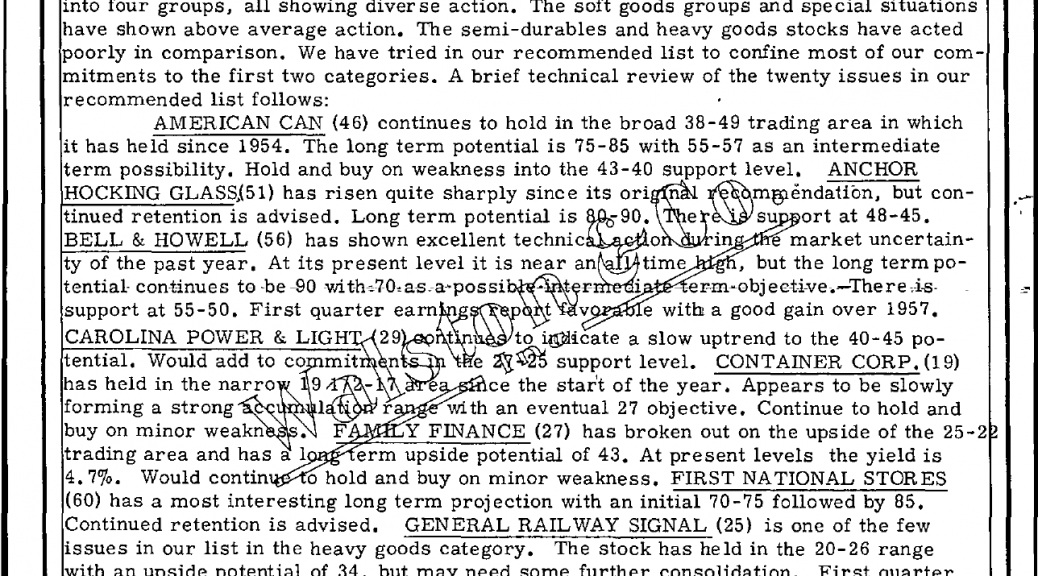 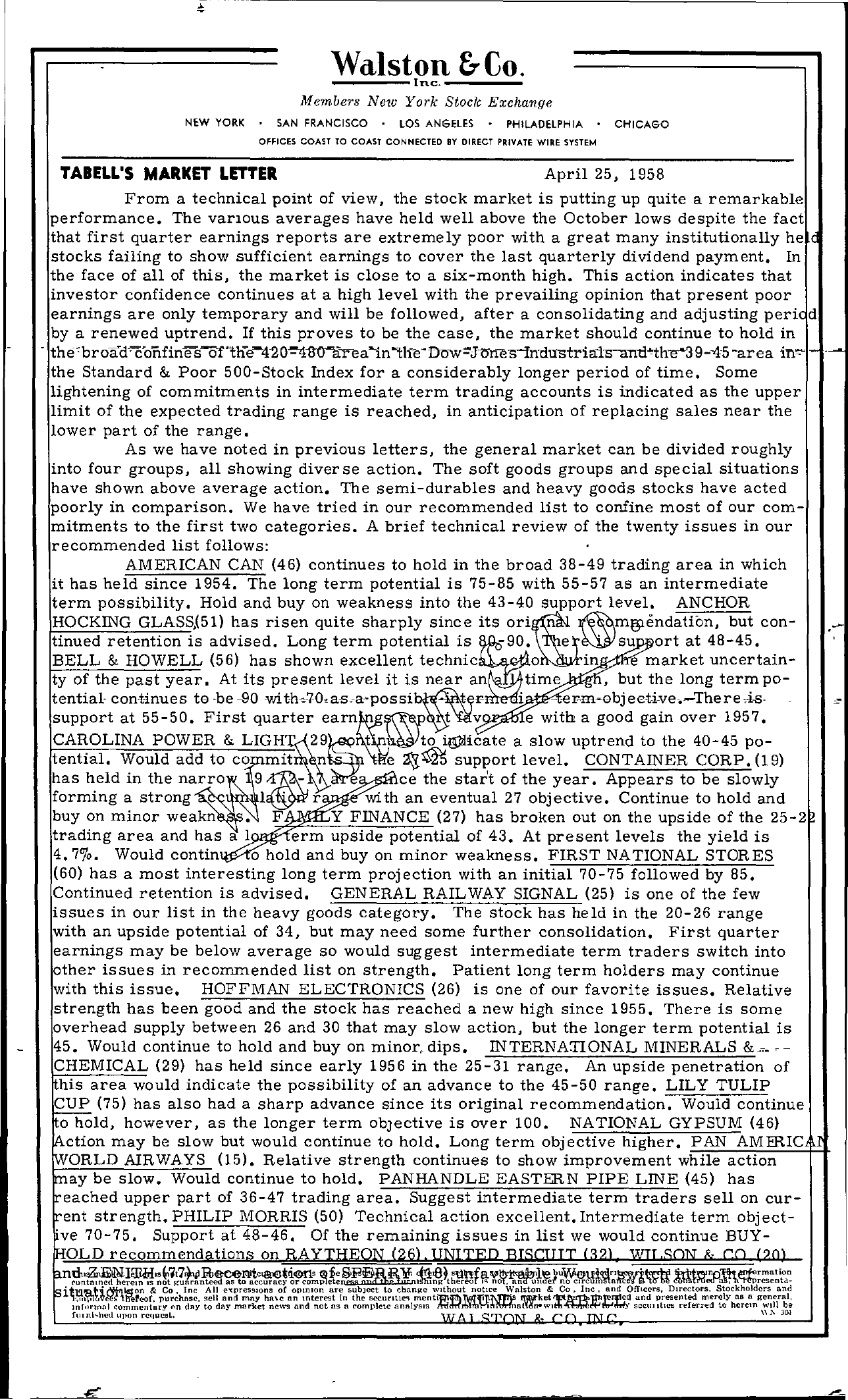 NEW YORK Wdlston &Co. Inc. Members New York Stocle Exchange SAN FRANCISCO LOS ANGElES PHILADELPHIA OFFICES COAST TO COAST CONNECTED BY DIRECT PRIVATE WIRE SYSTEM CHICAGO TABELL'S MARKET LETTER April 25, 1958 From a technical point of view, the stock market is putting up quite a remarkable performance. The varIOUS averages have held well above the October lows despite the fact that first quarter earnings reports are extremely poor with a great many institutionally here stocks failing to show sufficient earnings to cover the last quarterly dividend payment. In the face of all of this, the market is close to a six-month high. This action indicates that investor confidence continues at a high level with the prevailing opinion that present poor earnings are only temporary and will be followed, after a consolidating and adjusting perie d by a renewed uptrend. If this proves to be the case, the market should continue to hold in – the' 9–45 -area in- the Standard & Poor 500-Stock Index for a considerably longer period of time. Some lightening of commitments in intermediate term trading accounts is indicated as the upper limit of the expected trading range is reached, in anticipation of replacing sales near the lower part of the range. As we have noted in previous letters, the general market can be divided roughly into four groups, all showing diver se action. The soft goods groups and special situations have shown above average action. The semi-durables and heavy goods stocks have acted poorly in comparison. We have tried in our recommended list to confine most of our com- mitments to the first two categories. A brief technical review of the twenty issues in our recommended list follows AMERICAN CAN (46) continues to hold in the broad 38-49 trading area in which it has held since 1954. The long term potential is 75-85 with 55-57 as an intermediate term possibility. Hold and buy on weakness into the 43-40 support level. ANCHOR HOCKING GLASS,(51) has risen quite sharply since its but con- tinued retention is advised. Long term potential is e ort at 48-45. BELL & HOWELL (56) has shown excellent technic 0 in e market uncertain- ty of the past year. At its present level it is near , but the long term po- e. CAROLINA POWER & iwaicate a slow uptrend to the 40-45 po- tential. Would co mit n e support level. CONTAINER CORP. (19) has held in the narro 9 the star't of the year. Appears to be slowly forming a strong an eventual 27 objective. Continue to hold and buy on minor weakn (27) has broken out on the upside of the 25-2 trading area and has a I erm upside potential of 43. At present levels the yield is 4.7/0. Would contin 0 hold and buy on minor weakness. FIRST NATIONAL STORES (60) has a most interesting long term projection with an initial 70-75 followed by 85. Continued retention is advised. GENERAL RAILWAY SIGNAL (25) is one of the few issues in our list in the heavy goods category. The stock has held in the 20-26 range with an upside potential of 34, but may need some further consolidation. First quarter earnings may be below average so would suggest intermediate term traders switch into other issues in recommended list on strength. Patient long term holders may continue with this issue. HOFFMAN ELECTRONICS (26) is one of our favorite issues. Relative strength has been good and the stock has reached a new high since 1955. There is some overhead supply between 26 and 30 that may slow action, but the longer term potential is 45. Would continue to hold and buy on minor. dips. INTERNATIONAL MINERALS & — CHEMICAL (29) has held since early 1956 in the 25-31 range. An upside penetration of his area would indicate the possibility of an advance to the 45-50 range. LILY TULIP CUP (75) has also had a sharp advance since its original recommendation. Would continue o hold, however, as the longer term obJective is over 100. NATIONAL GYPSUM (46) Action may be slow but would continue to hold. Long term objective higher. PAN AMERIC WORLD AIRWAYS (15). Relative strength continues to show improvement while action be slow. Would continue to hold. PANHANDLE EASTERN PIPE LINE (45) has reached upper part of 36-47 trading area. Suggest intermediate term traders sell on cur- rent strength. PHILIP MORRIS (50) Technical action excellent. Intermediate term object- 've 70-75. Support at 48-46. Of the remaining issues in list we would continue BUY- HOLD recommendations on RAYTHEON (26), UNITED BISCTTTT (32) WIT ..sON & CO (20) r– r\'oI1\lSon & Co. lne All (''I(preSSlOns of OPIniOn are subject to change! Without notice Walston & Co. lne, and Officers, Directors. Stockholders and purchase, sell and mny hrl\e an mterest in the ruw-ketr1Jj;1\'QtlJJtcllJ'led and presented merely as a general, Informal commentllry nn day to day market new'S and not as a complete analysIS f\nnhhetiupon re(luest. UIl!J. T r n secullhes referred to herem Will be R. Tl\Tr' \\l\ 301