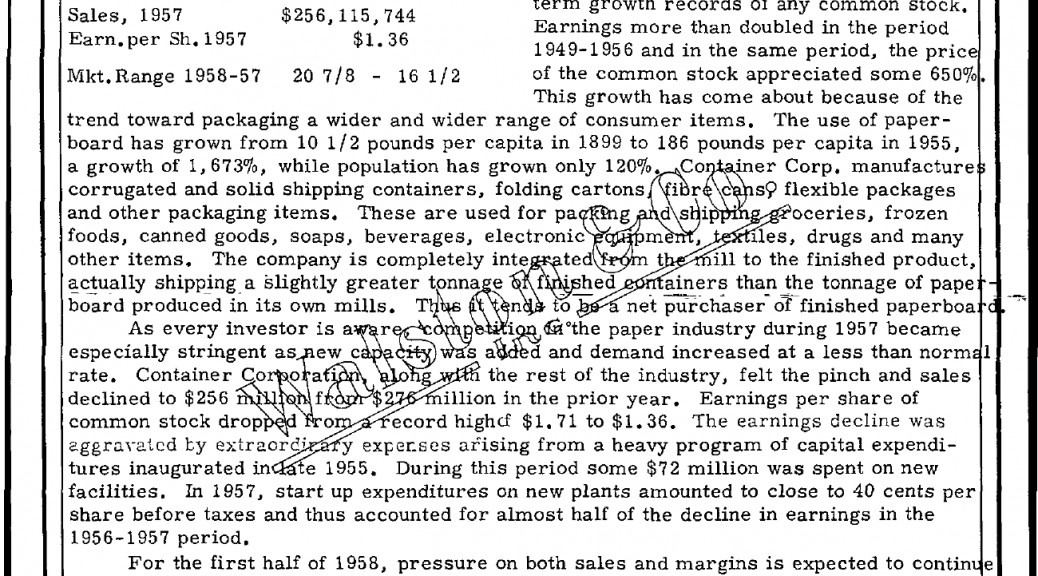 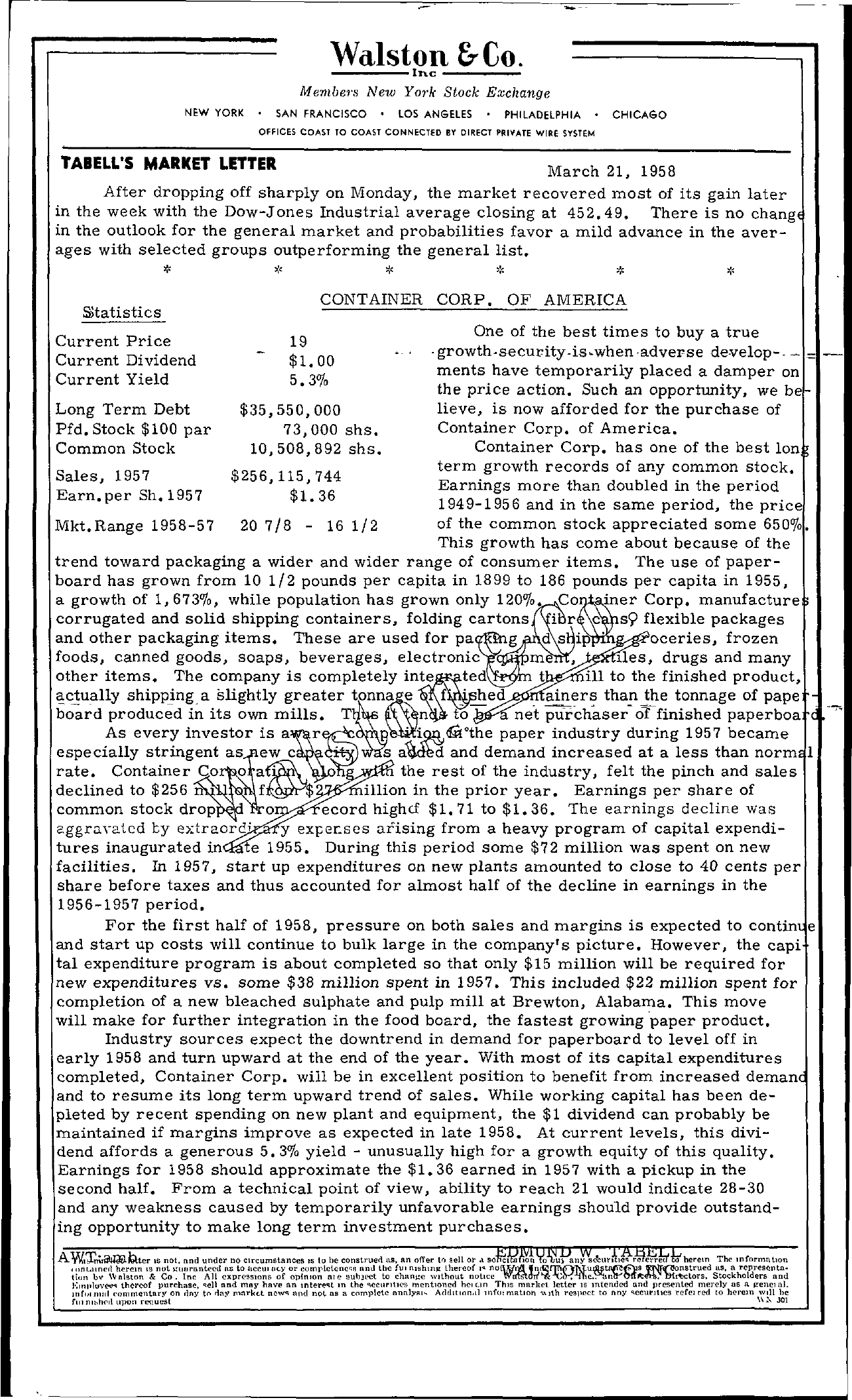 — NEW YORK Wdlston &Co. ———lnc——— Membel's New YOI'k Stock EXchange SAN FRANCISCO LOS ANGELES PHILADELPHIA OffiCES COAST TO COAST CONNECTED BY DIRECT PRIVATE WIRE SYSTEM CHICAGO TABELL'S MARKET LETTER March 21, 1958 After dropping off sharply on Monday, the market recovered most of its gain later in the week with the Dow-Jones Industrial average closing at 452.49. There is no chang in the outlook for the general market and probabilities favor a mild advance in the aver- ages with selected groups outperforming the general list. tatistics CONTAINER CORP. OF AMERICA Current Price Current Dividend Current Yield 19 1. 00 5. 3 One of the best times to buy a true -growth.secut'ity.is-when ,advel'se develop- – ' ments have temporarily placed a damper on the price action. Such an opportunity, we be Long Term Debt Pfd. Stock 100 par Common Stock Sales, 1957 Earn.per Sh.1957 35,550,000 73,000 shs. 10,508,892 shs. 256,115,744 1. 36 lieve, is now afforded for the purchase of Container Corp. of America. Container Corp. has one of the best Ion term growth records of any common stock. Earnings more than doubled in the period 1949-1956 and in the same period, the price Mkt.Range 1958-57 20 7/8 – 16 1/2 of the common stock appreciated some 650. This growth has come about because of the trend toward packaging a wider and wider range of consumer items. The use of paper- board has grown from 10 1/2 pounds per capita in 1899 to 186 pounds per capita in 1955, a growth of 1,673, while population has grown only 1200/0. cOi'ner Corp. manufacture corrugated and solid shipping containers, folding cartons i r c s9 flexible packages and other packaging items. These are used for pa g d s ip . oceries, frozen foods, canned goods, soaps, beverages, electronic me lIes, drugs and many other items. The company is completely inf i eted t ill to the finished product, ,!cJually shipping a slightly greater board produced in its own mills. f . n to tha the tonnage of pape net purchaser 01 finished paperboa As every investor is especially stringent as ew c . s paper industry during 1957 became and demand increased at a less than norm I rate. Container Co 0 the rest of the industry, felt the pinch and sales declined to 256 illion in the prior year. Earnings per share of common stock drop ecord highcf 1.71 to 1.36. The earnings decline was aggro.\'atcd ty exlraordi y experscs arising from a heavy program of capital expendi- tures inaugurated in te 1955. During this period some 72 million was spent on new facilities. In 1957, start up expenditures on new plants amounted to close to 40 cents per share before taxes and thus accounted for almost half of the decline in earnings in the 1956-1957 period. For the first half of 1958, pressure on both sales and margins is expected to contin e and start up costs will continue to bulk large in the company's picture. However, the capi tal expenditure program is about completed so that only 15 million will be required for new expenditures vs. some 38 million spent in 1957. This included 22 million spent for completion of a new bleached sulphate and pulp mill at Brewton, Alabama. This move will make for further integration in the food board, the fastest growing 'paper product. Industry sources expect the downtrend in demand for paperboard to level off in early 1958 and turn upward at the end of the year. With most of its capital e'Kpenditures completed, Container Corp. will be in excellent position to benefit from increased deman and to resume its long term upward trend of sales. While working capital has been de- pleted by recent spending on new plant and equipment, the 1 dividend can probably be maintained if margins improve as expected in late 1958. At current levels, this divi- dend affords a generous 5. 3 yield – unusually high for a growth equity of this quality. Earnings for 1958 should approximate the 1.36 earned in 1957 with a pickup in the second half. From a technical point of view, ability to reach 21 would indicate 28-30 and any weakness caused by temporarily unfavorable earnings should provide outstand- ing opportunity to make long term investment purchases. IS not, nnd under no circumstances 15 to be construed us. an offer to s('ll or .\ so lei IOn 0 U) any slenr, re errc( herem The Hlformnbon ,,,nt.J.tncfl herem IS nut flS to hCCtllll(.Y or ami the lUI !l.lshmJ,! thereof I nu1'i.MriJ. us, a repres(!ntn Hun bv \'y nlston & Co, Inc All expresSIOns of ollinlon 81 e subject to without notice Wufs'tdn't lTlrbtors, Stockholders and Emll\oV( thereof I)urchase, ell nnd mny have an InterE';t In the ecurltles mentioned hel un ThiS mnrket letter IS mtended and presented merely as a g-eliCI aJ. 111fvlmlll rommentlLry on rlny t …. nllY mnrkd new lind not liS a c…. mplcte 1I11nlYIII'o AddltlOn,ll tlfolmatlOn '\11h respect to any 'Iecur111CS refelred to herem will be fill nlt.h('11 upon request \\, Jot