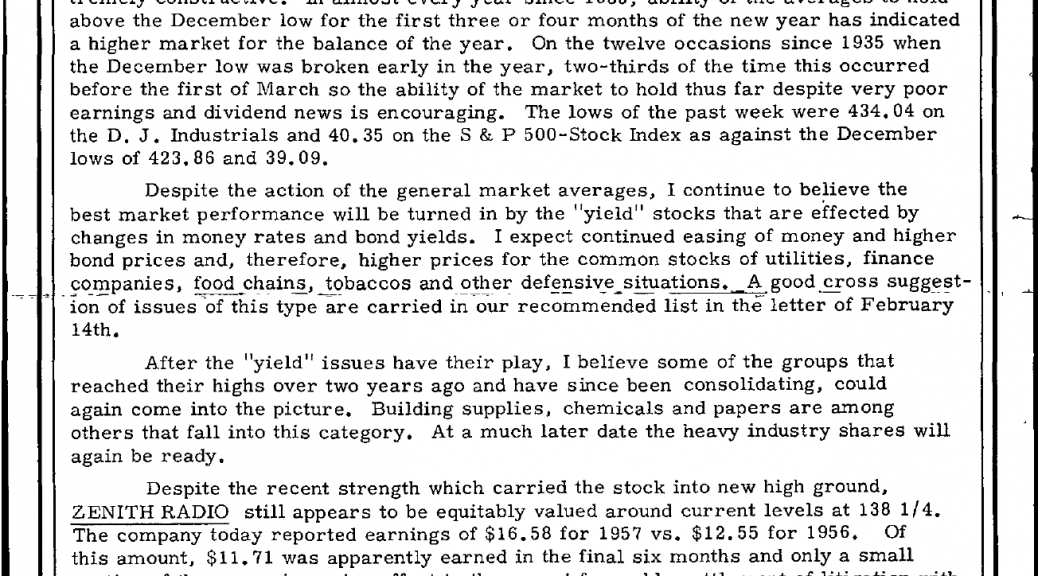 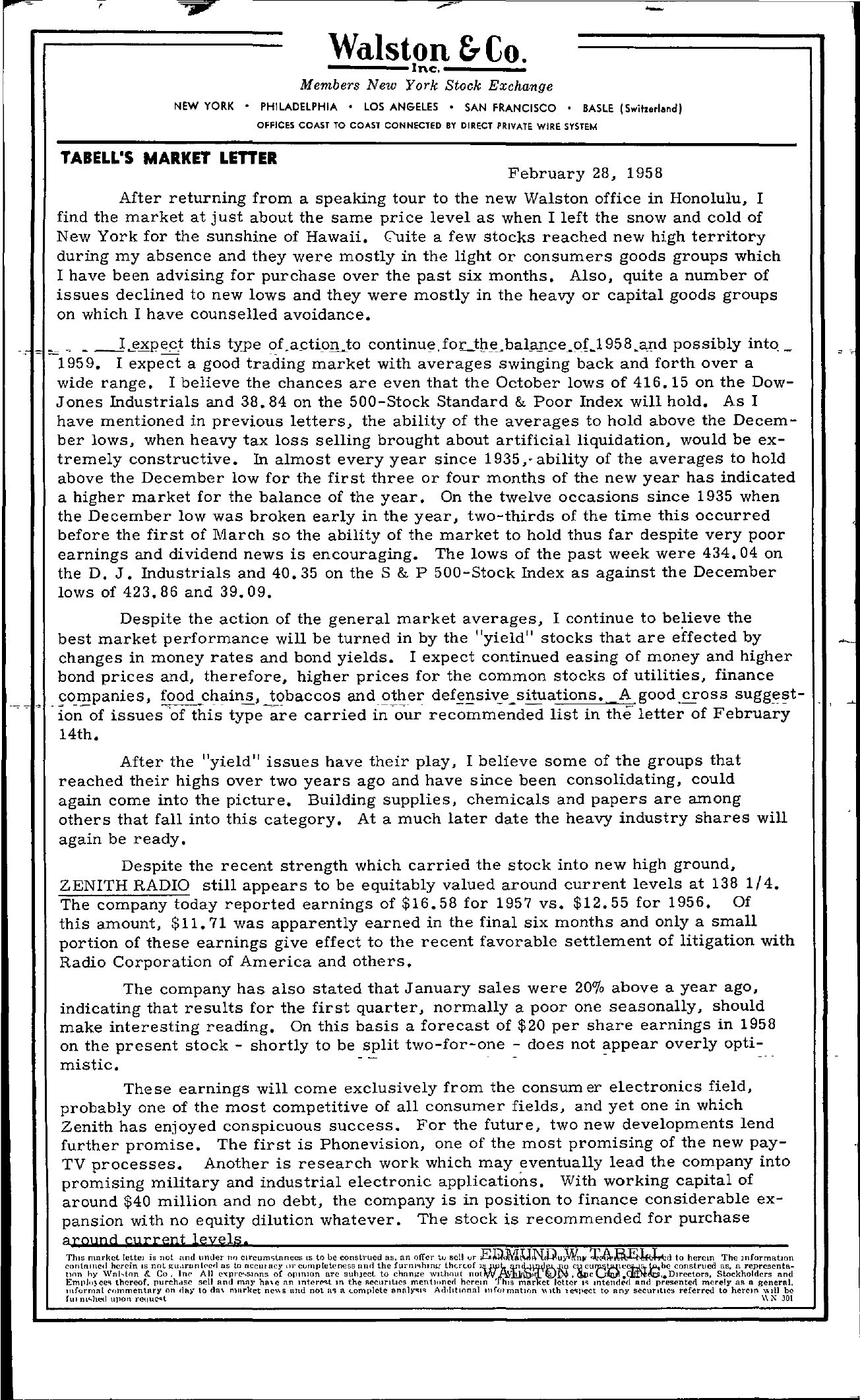 Walston &- Co. – – – – I n c , – Members New York Stock Exchange NEW YORK PHILADELPHIA LOS ANGELES SAN FRANCISCO BASLE ISwH,.,I.,d) OFFICES COAST TO COAST CONNECTED BY DIRECT PRIVATE WIRE SYSTEM TABELL'S MARKET LinER February 28, 1958 After returning from a speaking tour to the new Walston office in Honolulu, I find the market at just about the same price level as when I left the snow and cold of New York for the sunshine of Hawaii. G'uite a few stocks reached new high territory during my absence and they were mostly in the light or consumers goods groups which I have been advising for purchase over the past six months. Also, quite a number of issues declined to new lows and they were mostly in the heavy or capital goods groups on which I have counselled avoidance. this type of,actiOILto possibly into – -1959. I expect a good trading market with averages swinging back and forth over a wide range. I believe the chances are even that the October lows of 416.15 on the Dow- Jones Industrials and 38.84 on the 500-Stock Standard & Poor Index will hold. As I have mentioned in previous letters, the ability of the averages to hold above the Decem- ber lows, when heavy tax loss selling brought about artificial liquidation, would be ex- tremely constructive. In almost every year since 1935, ability of the averages to hold above the December low for the first three or four months of the new year has indicated a higher market for the balance of the year. On the twelve occasions since 1935 when the December low was broken early in the year, two-thirds of the time this occurred before the first of March so the ability of the market to hold thus far despite very poor earnings and dividend news is encouraging. The lows of the past week were 434.04 on the D. J. Industrials and 40.35 on the S & P 500-Stock Index as against the December lows of 423.86 and 39.09. Despite the action of the general market averages, I continue to believe the best market performance will be turned in by the yield stocks that are effected by changes in money rates and bond yields. I expect continued easing of money and higher bond prices and, therefore, higher prices for the common stocks of utilities, finance food chains, Jgbaccos A good,cross suggest- ion of issues 'of this type are carried in our recommended list in the letter of February 14th. After the yield issues have their play, I believe some of the groups that reached their highs over two years ago and have since been consolidating, could again come into the picture. Building supplies, chemicals and papers are among others that fall into this category. At a much later date the heavy industry shares will again be ready. Despite the recent strength which carried the stock into new high ground, ZENITH RADIO still appears to be equitably valued around current levels at 138 1/4. The company today reported earnings of 16.58 for 1957 vs. 12.55 for 1956. Of this amount, 11.71 was apparently earned in the final six months and only a small portion of these earnings give effect to the recent favorable settlement of litigation with Radio Corporation of America and others. The company has also stated that January sales were 200/0 above a year ago, indicating that results for the first quarter, normally a poor one seasonally, should make interesting reading. On this basis a forecast of 20 per share earnings in 1958 on the present stock – shortly to be split two-for-one – does not ippear overly opti- mistic. .- These earnings will come exclusively from the consum er electronics field, probably one of the most competitive of all consumer fields, and yet one in which Zenith has enjoyed conspicuous success, For the future, two new developments lend further promise. The first is Phonevision, one of the most promising of the new payTV processes. Another is research work which may eventually lead the company into promising military and industrial electronic applications. With working capital of around 40 million and no debt, the company is in position to finance considerable expansion with no equity dilution whatever. The stock is recommended for purchase a roup d cp rreDt leyels. Thls market idtCl is not and under no CLrcumst.nnces IS to be constl'ucd as. an offer tu sell ur to herem The lTIformation ('untallled herein IS not as to nccUl acy r completeness nnri the CurnJhmj.t th(.r(.of t(ln hy \\'nhton 8. Co. InC' All ('xpt'C'Slons or opmlon arc suhJect to change WIthout notiV\f. tp..he construed as. a represent!!.Q,v.c Dlrector9. Stockholders and EmI11,,cc'I thereof. purch.l.se sell and may ha\c an m the mentlHned herem 'hIs mar et lettcr 1'1 mtE'ndd and presented mcre!y as a genera!. 11Iforma! ('ommentllry on rill' to da\ mllrket nc\\s lind not no; a (.oml)lete annly,,, A'.!ltlOnai 11lfOtmatlon '\Ith 1 (;llcct to any securities referred to hcrcm \,,111 be fUI m … hed III'on \\ X J01