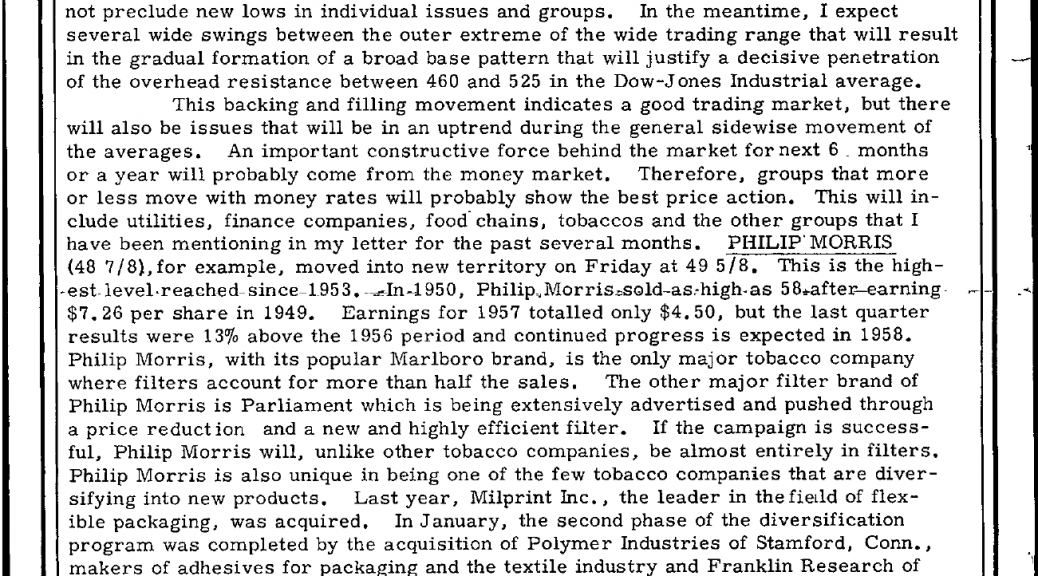 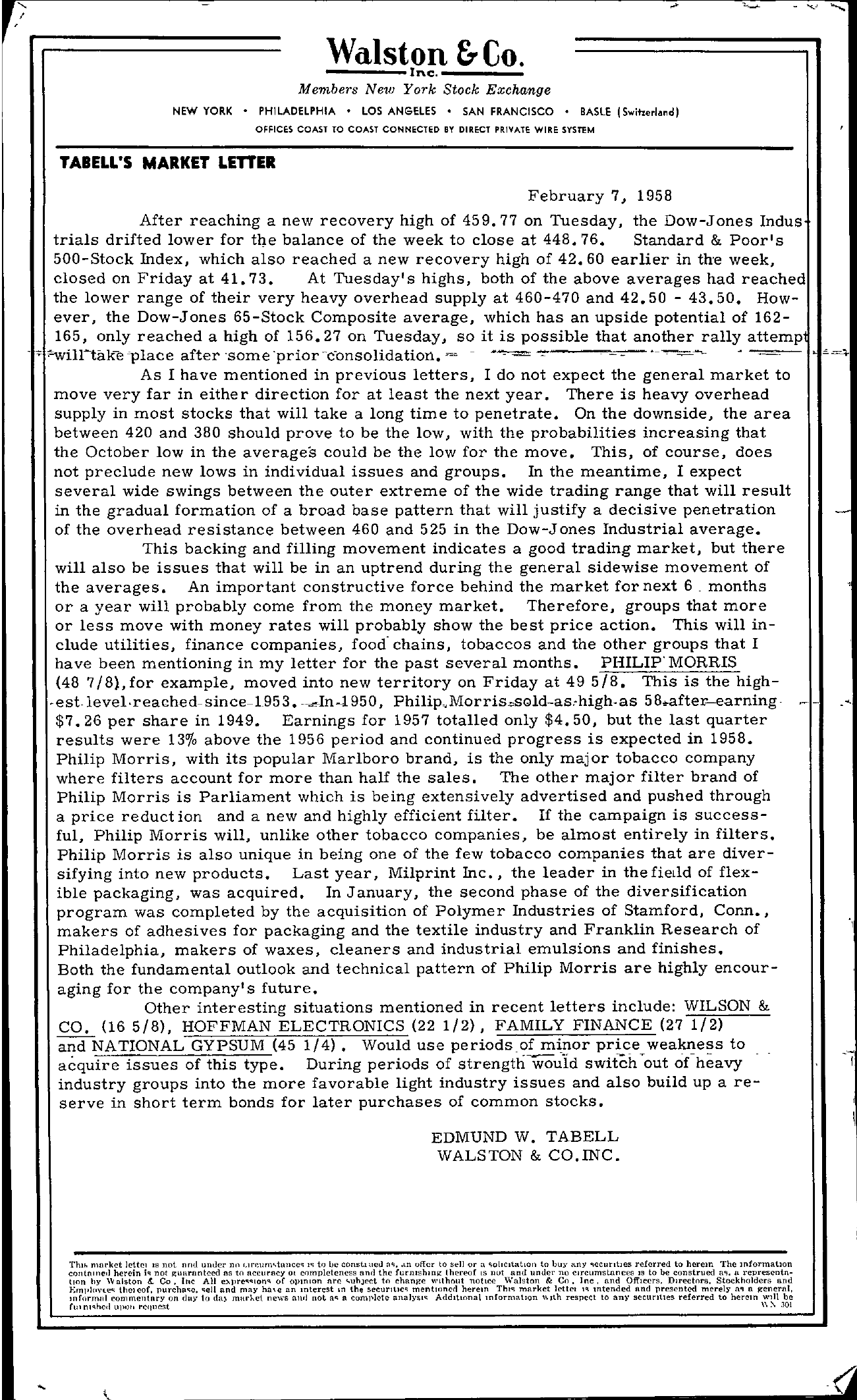 Walston &Co. – – – – I n c . Members New York Stock Exchange NEW YORK PHILADELPHIA LOS ANGELES SAN FRANCISCO BASLE (Swa…laod) OFFICES COAST TO COAST CONNECTED BY DIRECT PRIVATE WIRE SYSTEM TABELL'S MARKET LEnER February 7, 1958 After reaching a new recovery high of 459.77 on Tuesday, the Dow-Jones Indus trials drifted lower for the balance of the week to close at 448.76. Standard & Poor's 500-Stock Index, which also reached a new recovery high of 42.60 earlier in the week, closed on Friday at 41. 73. At Tuesday's highs, both of the above averages had reached the lower range of their very heavy overhead supply at 460-470 and 42.50 – 43.50. However, the Dow-Jones 65-Stock Composite average, which has an upside potential of 162165, only reached a high of 156.27 on Tuesday, so it is possible that another rally attemp – after -some -prior-consolidation. – – – ..,.. As I have mentioned in previous letters, I do not expect the general market to move very far in either direction for at least the next year. There is heavy overhead supply in most stocks that will take a long time to penetrate. On the downside, the area between 420 and 380 should prove to be the low, with the probabilities increasing that the October low in the averages could be the low for the move. This, of course, does not preclude new lows in individual issues and groups. In the meantime, I expect several wide swings between the outer extreme of the wide trading range that will result in the gradual formation of a broad base pattern that will justify a decisive penetration of the overhead resistance between 460 and 525 in the Dow-J ones Industrial average. This backing and filling movement indicates a good trading market, but there will also be issues that will be in an uptrend during the general sidewise movement of the averages. An important constructive force behind the market for next 6 months or a year will probably come from the money market. Therefore, groups that more or less move with money rates will probably show the best price action. This will include utilities, finance companies, food- chains, tobaccos and the other groups that I have been mentioning in my letter for the past several months. PHILIP' MORRIS (48 7/8),for example, moved into new territory on Friday at 49 5/8. This is the highest levelreached-since-L953. -,In-1950, 7.26 per share in 1949. Earnings for 1957 totalled only 4.50, but the last quarter results were 130/0 above the 1956 period and continued progress is expected in 1958. Philip Morris, with its popular Marlboro brand, is the only major tobacco company where filters account for more than half the sales. The other major filter brand of Philip Morris is Parliament which is being extensively advertised and pushed through a price reduct ion and a new and highly efficient filter. If the campaign is successful, Philip Morris will, unlike other tobacco companies, be almost entirely in filters. Philip Morris is also unique in being one of the few tobacco companies that are diversifying into new products. Last year, Milprint Inc., the leader in thefielld of flexible packaging, was acquired. In January, the second phase of the diversification program was completed by the acquisition of Polymer Industries of Stamford, Conn., makers of adhesives for packaging and the textile industry and Franklin Research of Philadelphia, makers of waxes, cleaners and industrial emulsions and finishes. Both the fundamental outlook and technical pattern of Philip Morris are highly encouraging for the company's future. Other interesting situations mentioned in recent letters include WILSON & CO. (165/8), HOFFMAN ELECTRONICS (22 1/2), FAMILY FINANCE (27 1/2) and NATIONAL GYPSUM (45 1/4). Would use periodsof minor price weakness to acquire issues of this type. During periods of strengtliwould switchout ci(heavy industry groups into the more favorable light industry issues and also build up a reserve in short term bonds for later purchases of common stocks. EDMUND W. TABELL WALSTON & CO. INC. lllarket Jettel 18 not nnd unuer nn tl) be constitH),j ,In offer to sell or n ;ollcltatLOrl to buy any '!('cuntles referred to herem The lnformatlOn CQlltfllne,j herein i; not Jl;unrnntced ns to nccuracy 01 completeness and the furnishing thereof IS nut and under no Circumstances 19 to be construed a'!. 'I rcpresentn- tlon hy '\'alston .t Co. Inc All e).prClOl1 of (1)1111on nrc 'uhJcct to change without notice \\'al5ton & Co, Inc, and Officers, Directors. Stockholders and Emplo\'(.e' thcleof, purchn'c, '1ell and may hate an Interest In the securltle'l mentioned herein Thl'l market lettel 1; lntendcd nnd presented merely a'! a general, mfurmnl commentary on day to mllrhct news find not a .. a complete analYSI.. Addlilona\mformatlon \'lth respect to any securities referred to herem Will be fln m ..hed liP')!' request \\-. JOt