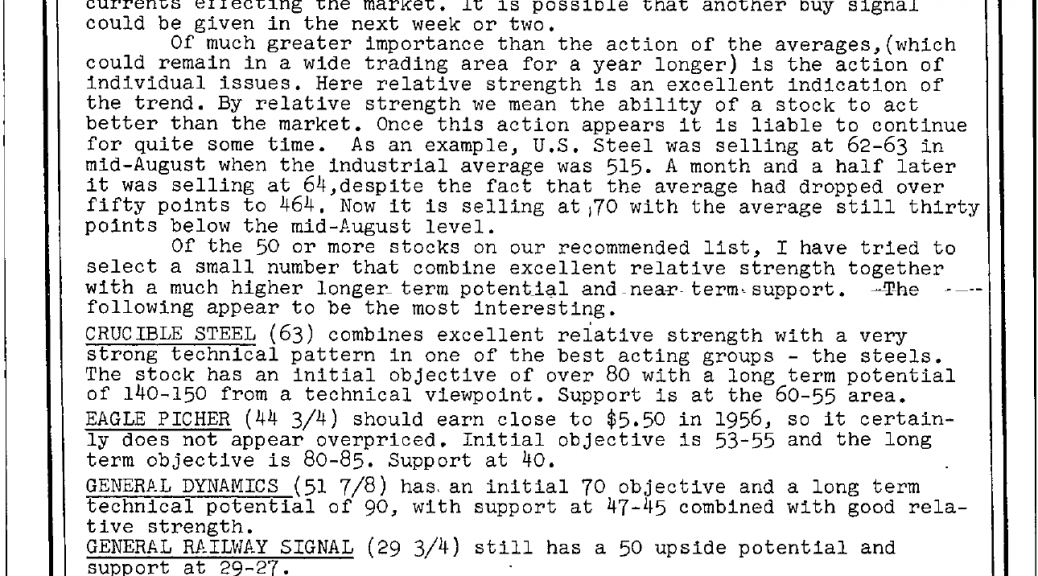 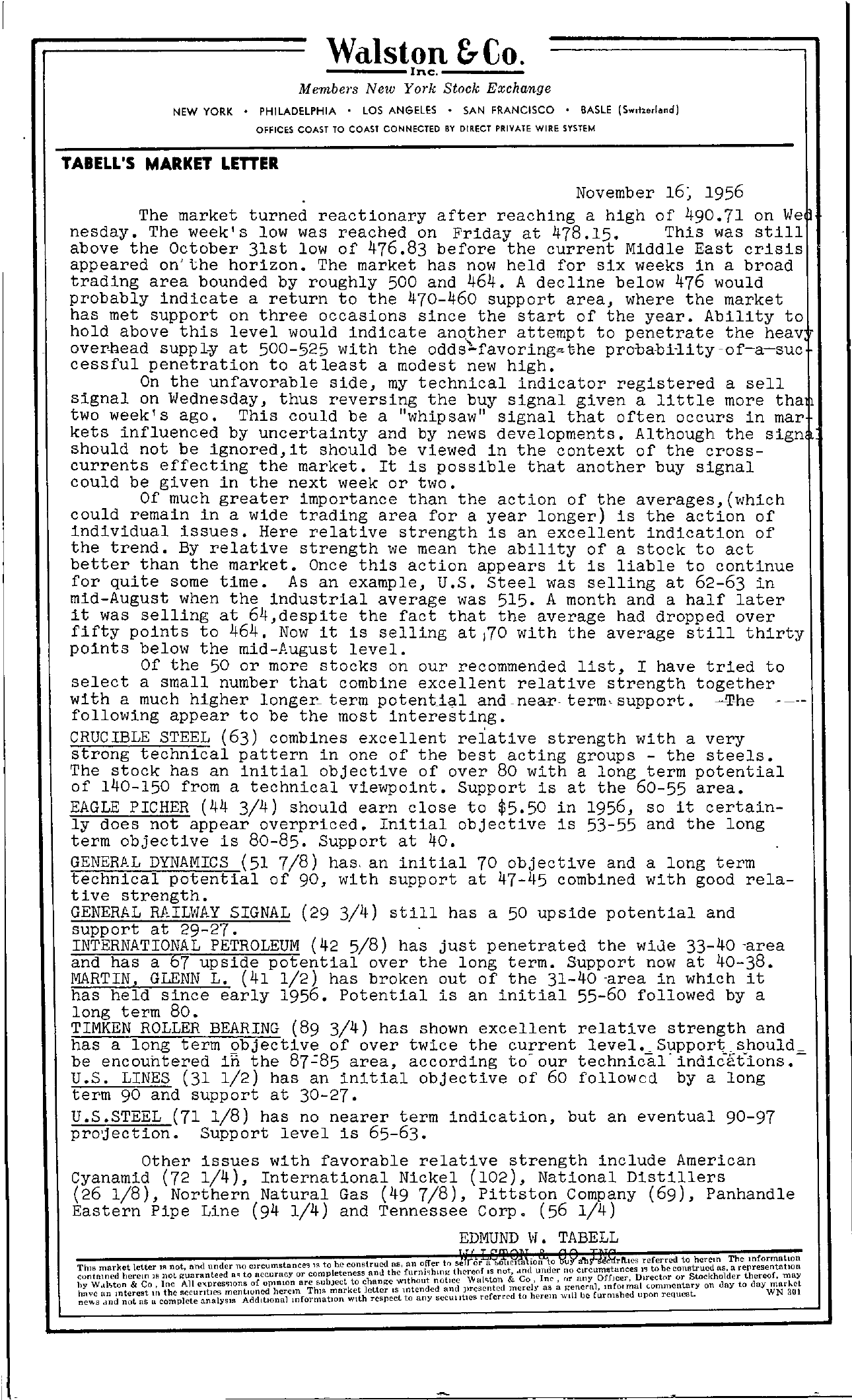 Walston &- Co. Inc. -..;,.-….;;.– Members New York Stock Exchange NEW YORK PHILADELPHIA LOS ANGELES SAN FRANCISCO BASLE ISw,h.dd) OFFICES COAST TO COAST CONNECTED BY DIRECT PRI …. ATE WIRE SYSTEM TABEll'S MARKET lEnER November 16; 1956 The market turned reactionary after reaching a high of 490.71 on We nesday. The week's low was reached on Friday at 478.15. This was still above the October 31st low of 476.83 before the current Middle East crisis appeared on'the horizon. The market has now held for six weeks in a broad trading area bounded by roughly 500 and 464. A decline below 476 would probably indicate a return to the 470-460 support area, where the market has met support on three occasions since the start of the year. Ability to hold above this level would indicate another attempt to penetrate the heav overl'lead suppl-y at 500-525 with the pro'babB.ity-of-a-suc cessful penetration to atleast a modest new high. On the unfavorable side, my technical indicator registered a sell signal on Wednesday, thus reversing the buy signal given a little more tha two week's ago. This could be a whipsaw signal that often occurs in mar kets influenced by uncertainty and by news developments. Although the sign should not be ignored,it should be viewed in the context of the cross- currents effecting the market. It is possible that another buy signal could be given in the next week or two. Of much greater importance than the action of the averages,(which could remain in a wide trading area for a year longer) is the action of individual issues. Here relative strength is an excellent indication of the trend. By relative strength we mean the ability of a stock to act better than the market. Once this action appears it is liable to continue for quite some time. As an example, U.S. Steel was selling at 62-63 in mid-August when the industrial average was 515. A month and a half later it was selling at 64,despite the fact that the average had dropped over fifty points to 464. Now it is selling at 170 with the average still thirty pOints belol1 the mid-August level. Of the 50 or more stocks on our recommended list, I have tried to select a small number that combine excellent relative strength together wi th a much higher longer term potent.ial and. near term support. -The – -'- following appear to be the most interesting. CRUCIBLE STEEL (63) combines excellent relative strength with a very strong technical pattern in one of the best acting groups – the steels. The stock has an initial objective of over 80 with a long term potential of 140-150 from a technical viewpoint. Support is at the 60-55 area. EAGLE PICHER (44 3/4) should earn close to 5.50 in 1956, so it certainly does not appear overpriced. Initial objective is 53-55 and the long term objective is 80-85. Support at 40. GENERAL DYNAMICS (51 7/8) has. an initial 70 objective and a long term technical potential of 90, with support at 47-45 combined with good rela- tive strength. GENERAL RAILWAY SIGNAL (29 3/4) still has a 50 upside potential and support at 29-27. INTERNATIONAL PETROLEUM (42 5/8) has just penetrated the wiJe 33-40 'area and has a 67 upside potential over the long term. Support now at 40-38. MARTIN, GLENN L. (41 1/2) has broken out of the 31-40 'area in which it has held since early 1956. Potential is an initial 55-60 followed by a long term 80. TIMKEN ROLLER BEARING (89 3/4) has shown excellent relative strength and has a long term objective of over twice the current level. Support should be encouhtered in the area, according to-our technical'indications.- U.S. LINES (31 1/2) has an initial objective of 60 followed by a long term 90 and support at 30-27. U.S.STEEL (71 1/8) has no nearer term indication, but an eventual 90-97 pro'jection. Support level is 65-63. Other issues with favorable relative strength include American Cyanamid (72 1/4), International Nickel (102), National Distillers (26 1/8), Northern Natural Gas (49 7/8), Pittston Company (69), Panhandle Eastern Pipe Line (94 1/4) and Tennessee Corp. (56 1/4) EDMUND vi. TABELL Thlll market letter 111 not, and under no Clrcumstnnce'O g to be cuntalned herein IS IloL to nccurucy or completeness hl!'.pn o.fi'hLnr tht e r to !lj to bu)r'a''hrtc'c'!frft.lCs referred to herem The information orf RS 'nu&t . wd 'Co under Inc no or Circumstances to be construed as, a representatlOn uny Offlcer Director or Stockholder thereof. may hy & Co, Inc All of ar.rubJec\tot as; g-encral, (.ommcntary on day to nnen1vole.s an ll dnd lntoerteasst 1n11ctohmepsleectueTaintalelYs SmISentlAddn tlOna mIn ,o r ma, mar IOn e WI ' h r '…,pect to any SCCUlltlCS referred to herem will be (urmshed upon requesL