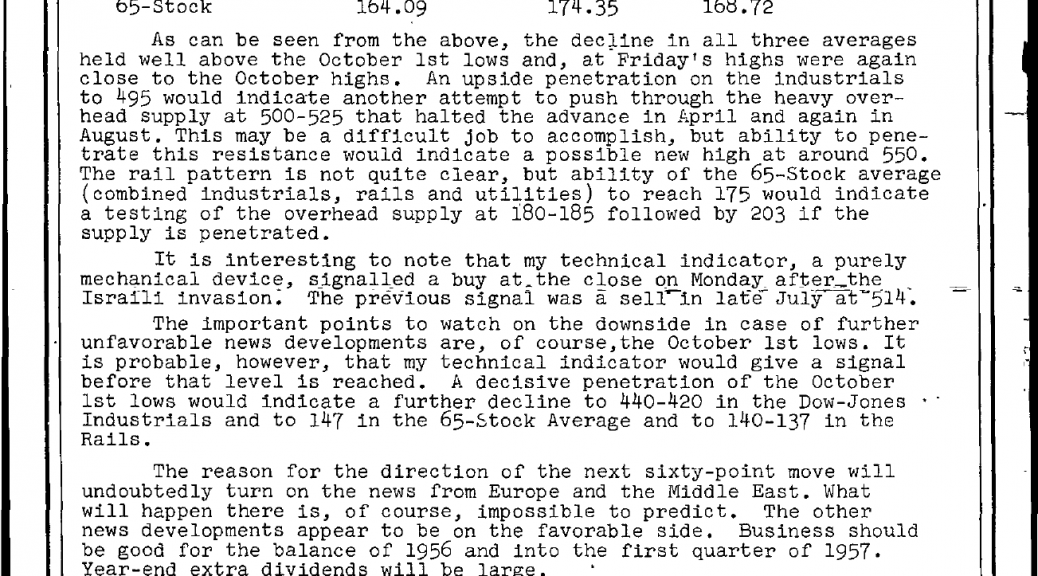 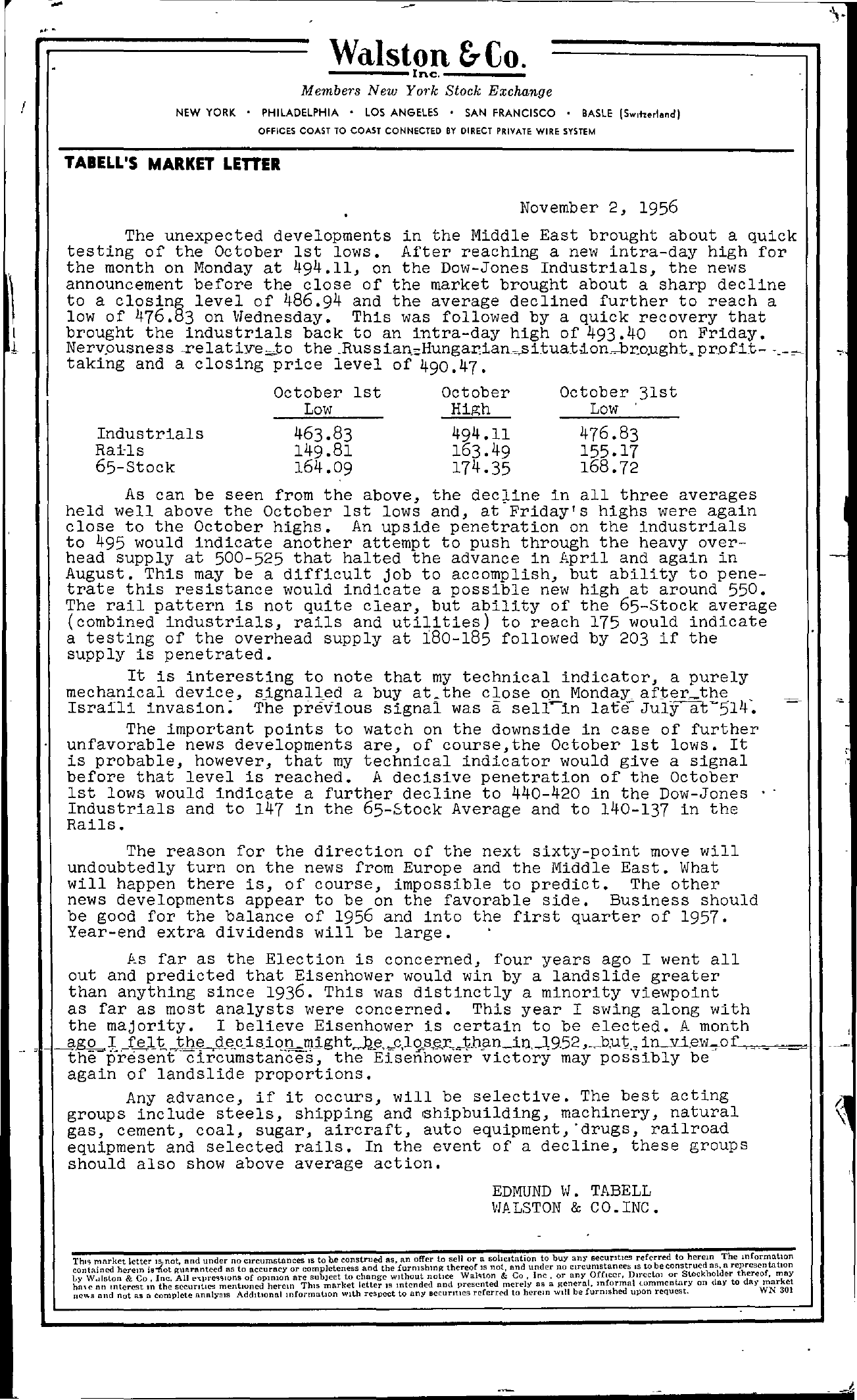 .' . ! NEW YORK Walston &Co. Inc. Members New YOk Stock Exchange PHILADELPHIA' LOS ANGELES SAN FRANCISCO BASLE ISw,h.dd) OFFICES COAST TO COAST CONNECTED BY DIRECT PRIVATE WIRE SYSTEM TABELL'S MARKET LEnER . November 2, 1956 The unexpected developments in the Middle East brought about a quick testing of the October 1st lows. After reaching a new intra-day high for the month on Monday at 494.11, on the Dow-Jones Industrials, the news announcement before the close of the market brought about a sharp decline to a closing level of 486.94 and the average declined further to reach a low of 476.83 on 1I1ednesday. This was followed by a quick recovery that brought the industrials back to an intra-day high of 493.40 on Friday. Nerv.ousness .relatilTeto the pr.ofit- taking and a closing price level of 490.47. October 1st Low October High October 31st Low Industrials Ralls 65-Stock 463.83 149.81 164.09 494.11 163.49 174.35 476.83 155.17 168.72 As can be seen from the above, the in all three averages held well above the October 1st lows and, at Friday's highs were again close to the October highs. An upside penetration on the industrials to 495 would indicate another attempt to push through the heavy over- head supply at 500-525 that halted the advance in April and again in August. This may be a difficult job to accomplish, but ability to pene- trate this resistance would indicate a possible new high at around 550. The rail pattern is not quite clear, but ability of the 65-Stock average (combined industrials, rails and utilities) to reach 175 would indicate a testing of the overhead supply at 180-185 followed by 203 if the supply is penetrated. It is interesting to note that my technical indicator, a purely mechanical device, Israili invasion; The pr a buy at.the evious signal was calos e on Monday afterthe late . The important pOints to watch on the downside in case of further unfavorable news developments are, of course,the October 1st lows. It is probable, however, that my technical indicator would give a signal before that level is reached. A decisive penetration of the October 1st lows would indicate a further decline to 440-420 in the Dow-Jones . Industrials and to 147 in the 65-Stock Average and to 140-137 in the Rails. The reason for the direction of the next Sixty-point move will undoubtedly turn on the news from Europe and the Middle East. Vlhat will happen there is, of course, impossible to predict. The other news developments appear to be on the favorable side. BUSiness should be good for the balance of 1956 and into the first quarter of 1957. Year-end extra diVidends will be large. As far as the Election is concerned, four years ago I went all out and predicted that Eisenhower would win by a landslide greater than anything since 1936. This was distinctly a minority viewpoint as far as most analysts were concerned. This year I swing along with the majority. I believe Eisenhower is certain to be elected. A month 0- JKQI,felt ,thi . the present circumstances 3 the Eisenhower Victory may possibly be again of landslide proportions. Any advance, if it occurs, will be selective. The best acting groups include steels, shipping and shipbuilding, machinery, natural gas, cement, coal, sugar, aircraft, auto eqUipment, 'drugs, railroad equipment and selected rails. In the event of a decline, these groups should also show above average action. EDMUND VI. TABELL i'lJ'. LSTON & CO. INC. i, \ Thl' market letter IS not, and under no circumstances IS to he construed as, an offer to sell or a soliCitation to buy any secuf1hes referred to herem The mformatlon contained herem istfot Rull,ranteed us to accuracy or completeness and the iurmshmR thereof IS llot, and under no Circumstances IS to be construed DS, a representation loy W llslon & Co Inc All 1'lI,rC''lons of opmIOn arc subJect to change WIthout notIce & Co, Inc, or any Officer, Dlrcewl or StockholoJer thereof, may lntcrcst sC(urltlCs mentlOneoJ herein ThIS market letter IS Intended and presented merely as a gcneral, mformal Lommcnt..ary on day to day market Ilc…. s and not as n complcte analySIS AdditIonal informatIOn With respect to nny BecuntlCs referred to herem will be furnished upon request. WN 301 . .. . ….. t