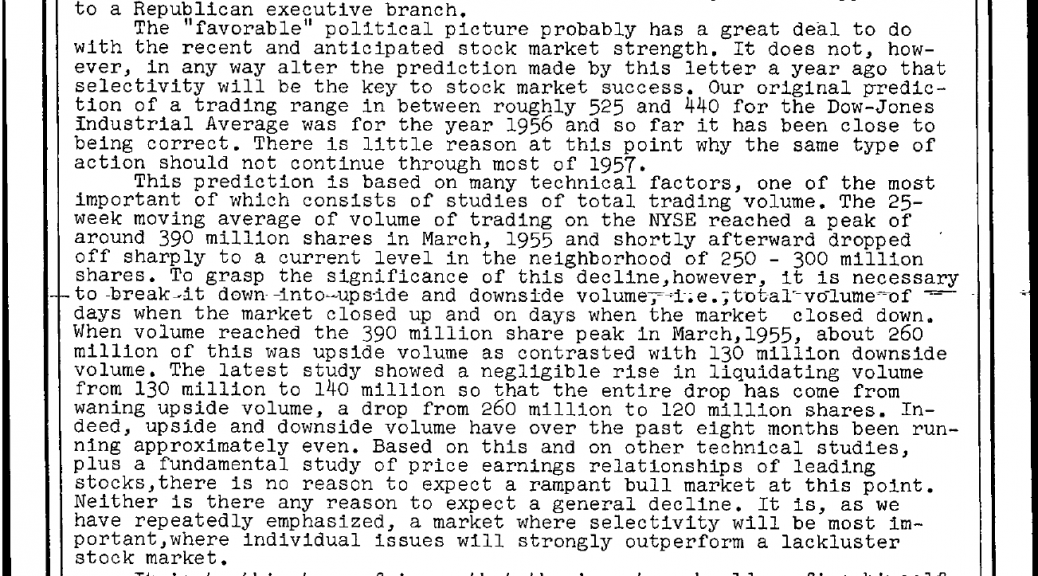 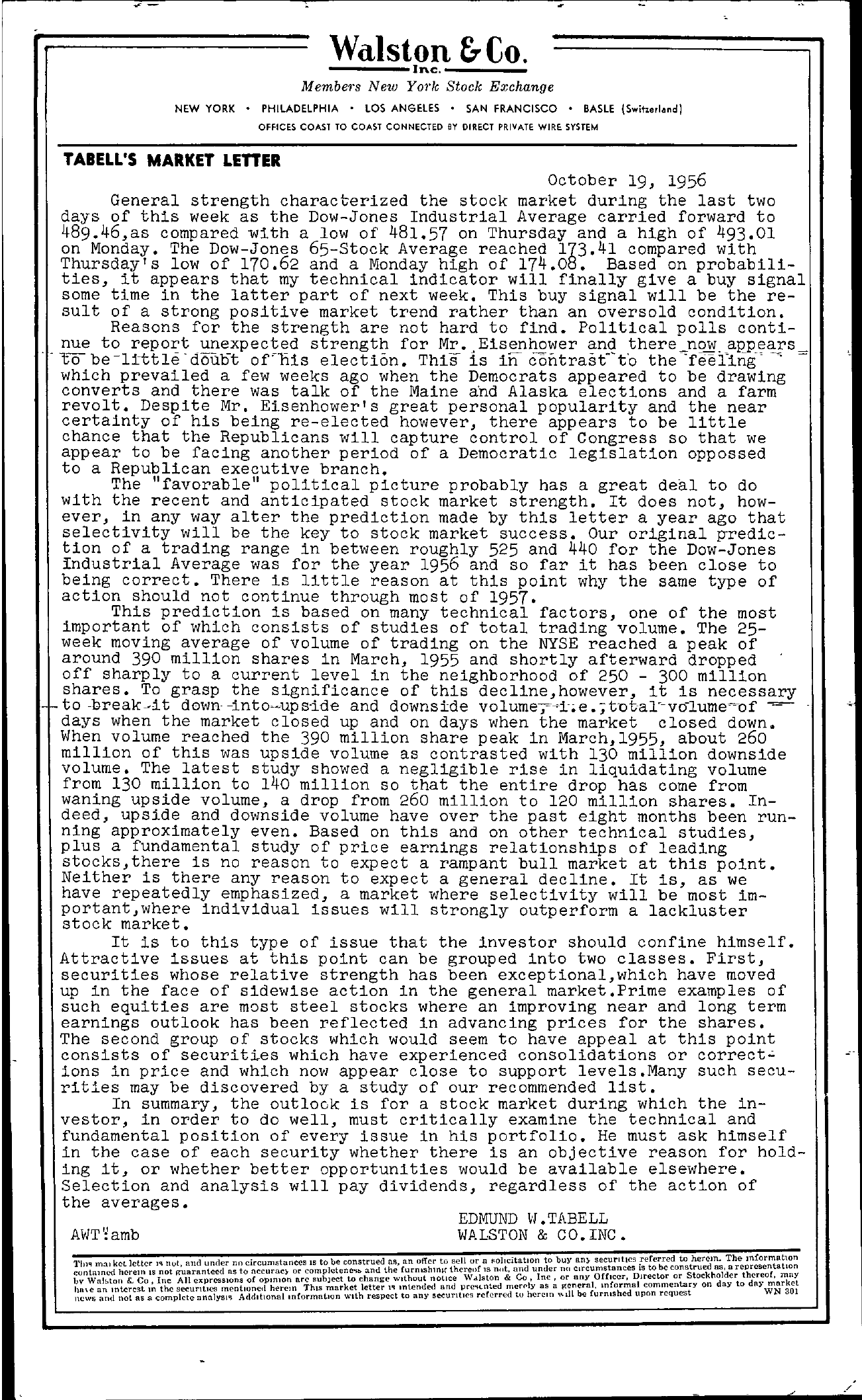 Wdlston &- Co. Inc, .;…………. 111embe,'s New York Stock Exchange NEW YORK PHILADELPHIA LOS ANGELES SAN FRANCISCO BASLE (Swit,ld) OFFICES COAST TO COAST CONNECTED BY DIRECT PRIVATE WIRE SYSTEM TABELL'S MARKET LEnER October 19, 1956 General strength characterized the stock market during the last two days of this week as the Dow-Jones Industrial Average carried forward to 489.46,as compared with a low of 481.57 on Thursday and a high of 493.01 on Monday. The Dow-Jones 65-Stock Average reached 173.41 compared with Thursday's low of 170.62 and a Monday high of 174.08. Based on probabilities, it appears that my technical indicator will finally give a buy signal some time in the latter part of next week. This buy signal will be the result of a strong positive market trend rather than an oversold condition. Reasons for the strength are not hard to find. Political polls continue to report unexpected strength for Mr. Eisenhower and .. to be -ltttle doullt orMs election. This is in contrast t'o the'feefing' -, – which prevailed a few weeks ago when the Democrats appeared to be drawing converts and there was talk of the Maine a'nd Alaska elections and a farm revolt. Despite Mr. Eisenhower's great personal popularity and the near certainty of his being re-elected however, there appears to be little chance that the Republicans will capture control of Congress so that we appear to be facing another period of a Democratic legislation oppossed to a Republican executive branch. The favorable political picture probably has a great deal to do with the recent and anticipated stock market strength. It does not, how- ever, in any way alter the prediction made by this letter a year ago that selectivity will be the key to stock market success. Our original tion of a trading range in between roughly 525 and 440 for the Dow-Jones Industrial Average was for the year 1956 and so far it has been close to being correct. There is little reason at this point why the same type of action should not continue through most of 1957. This prediction is based on many technical factors, one of the most important of which consists of studies of total trading volume. The 25- week moving average of volume of trading on the NYSE reached a peak of around 390 million shares in March, 1955 and shortly afterward dropped off sharply to a current level in the neighborhood of 250 – 300 million shares. To grasp the significance of this decline,however, it is necessary –to -break-it and downside days when the market closed up and on days when the market closed down. When volume reached the 390 million share peak in March,1955, about 260 million of this was upside volume as contrasted with 130 million downside volume. The latest study showed a negligible rise in liquidating volume from 130 million to 140 million so that the entire drop has come from waning upside volume, a drop from 260 million to 120 million shares. In- deed, upside and downside volume have over the past eight months been run- ning approximately even. Based on this and on other technical studies, plus a fundamental study of price earnings relationships of leading stocks,there is no reason to expect a rampant bull market at this point. Neither is there any reason to expect a general decline. It is, as we have repeatedly emphasized, a market where selectivity will be most im- portant,where individual issues will strongly outperform a lackluster stock market. It is to this type of issue that the investor should confine himself. Attractive issues at this point can be grouped into two classes. First, securities whose relative strength has been exceptional,which have moved up in the face of sidewise action in the general market.Prime examples of such equities are most steel stocks where an improving near and long term earnings outlook has been reflected in advancing prices for the shares. The second group of stocks which would seem to have appeal at this point consists of securities which have experienced consolidations or ions in price and which now appear close to support levels.Many such securities may be discovered by a study of our recommended list. In summary, the outlook is for a stock market during which the investor, in order to do well, must critically examine the technical and fundamental position of every issue in his portfolio. He must ask himself in the case of each security whether there is an objective reason for holding it, or whether better opportunities would be available elsewhere. Selection and analysis will pay dividends, regardless of the action of the averages. EDMUND \'/. TABELL AvlT '! amb vlALSTON & CO. INC mal kct letter 1'11101, and under no circumstances IS to be construed ns, nil offer to sell or n follcitatlOlI to buy nn securIties ,referred to herem. The contamed herem IS not guaranteed ns to nccurac) or complctcnc'It and the furmshmj.( thereof IS nt, and u,nder nn cLrcuomr',tnncCblS to;,c I \'1 I 8.. C I All n r opmlOn nrc subJect to change without notice \\'dlston & Co, nc, or nny Icer, Irec r or oc thCc herem ThiS market letter mtended and pre'ltnted mer…ly as a i'!llbral' mfohdal commenta;y on day to news and not as a eomplcte analysl' Additional information wIth respect to any BC'CUrltles referred tu herem 'I e urnlS e upon rcqucs may k