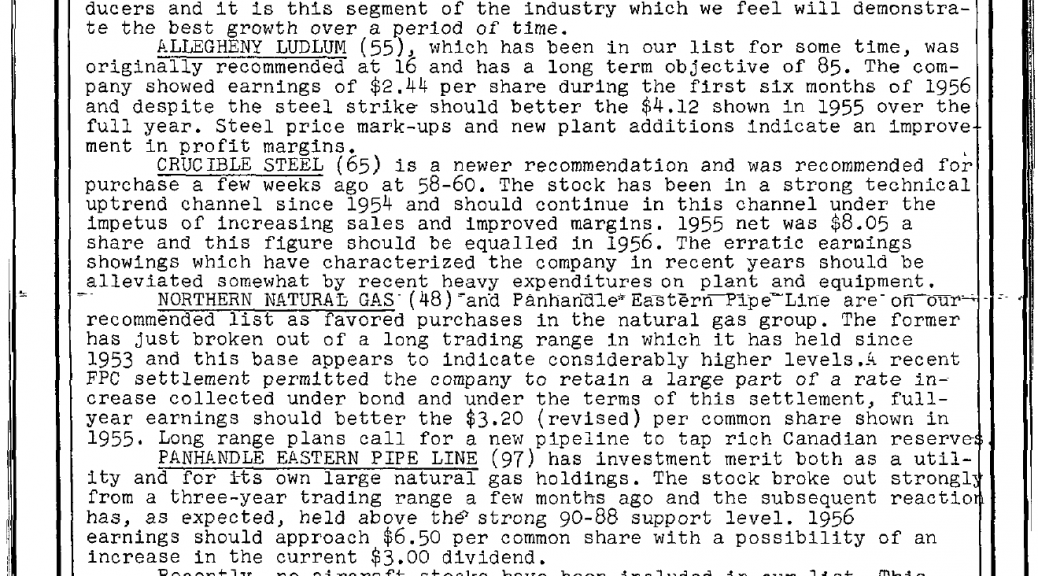 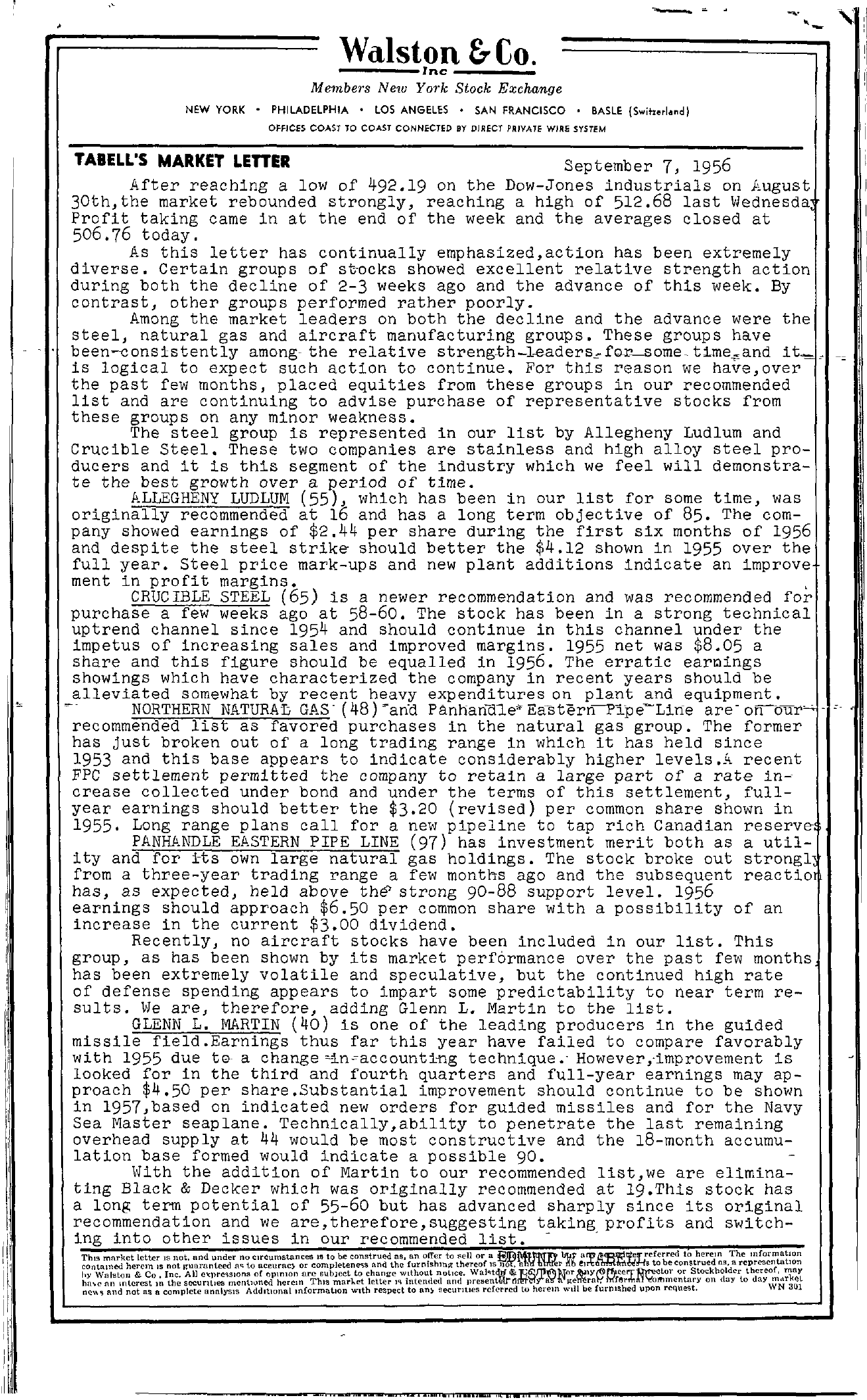 -, Walston &Co.——–lnc Members New yo,ok Stock EXchange NEW YORK PHILADELPHIA LOS ANGELES SAN FRANCISCO BASLE (Sw;t,Idl OFFICES COAST TO COAST CONNECTED BY DIRECT PRIVATE WIRE SYSTEM TABELL'S MARKET LEnER September 7, 1956 After reaching a low of 492.19 on the Dow-Jones industrials on August 30th,the market rebounded strongly, reaching a high of 512.68 last Wednesda Profit taking came in at the end of the week and the averages closed at 506.76 today. As this letter has continually emphasized, action has been extremely diverse. Certain groups of showed excellent relative strength action during both the decline of 2-3 weeks ago and the advance of this week. By contrast, other groups performed rather poorly. Among the market leaders on both the decline and the advance were the steel, natural gas and aircraft manufacturing groups. These groups have been-consistently among the relative is logical to expect such action to continue. For this reason we have,over the past few months, placed equities from these groups in our recommended list and are continuing to advise purchase of representative stocks from these groups on any minor weakness. The steel group is represented in our list by Allegheny Ludlum and Crucible Steel. These two companies are stainless and high alloy steel pro- ducers and it is this segment of the industry which we feel will demonstra- te the best growth over a period of time. ALLEGHENY LUDLUM (55), which has been in our list for some time, was originally recommended at 16 and has a long term objective of 85. The com- pany showed earnings of 2.44 per share during the first six months of 1956 and despite the steel strike should better the 4.12 shown in 1955 over the full year. Steel price mark-ups and new plant additions indicate an improve ment in profit margins. , CRUCIBLE STEEL (65) is a newer recommendation and was recommended for purchase a few weeks ago at 58-60. The stock has been in a strong technical uptrend channel since 1954 and should continue in this channel under the impetus of increasing sales and improved margins. 1955 net was 8.05 a share and this figure should be equalled in 1956. The erratic showings which have characterized the company in recent years should be alleviated somewhat by recent heavy expenditures on plant and eqUipment. NORTHERN NATURAL GAS (48) Pa.nhanale' Ea-sternPlpe-Line are O onour'- recommended list as favored purchases in the natural gas group. The former has just broken out of a long trading range in which it has held since 1953 and this base appears to indicate considerably higher levels.A recent FPC settlement permitted the company to retain a large part of a rate in- crease collected under bond and under the terms of this settlement, full- year earnings should better the 3.20 (revised) per common share shown in 1955. Long range plans call for a new pipeline to tap rich Canadian reserve PANHANDLE EASTERN PIPE LINE (97) has investment merit both as a util- ity and for its own large natural gas holdings. The stock broke out strong l' from a three-year trading range a few months ago and the subsequent reactio has, as expected, held above th strong 90-88 support level. 1956 earnings should approach 6.50 per common share with a possibility of an increase in the current 3.00 dividend. Recently, no aircraft stocks have been included in our list. This group, as has been shown by its market performance over the past few months has been extremely volatile and speculative, but the continued high rate of defense spending appears to impart some predictability to near term re- sults. We are, therefore, adding Glenn L. Martin to the list. GLENN L. MARTIN (40) is one of the leading producers in the guided missile field.Earnings thus far this year have failed to compare favorably with 1955 due te a change technique. However,improvement is looked for in the third and fourth quarters and full-year earnings may ap- proach 4.50 per share.Substantial improvement should continue to be shown in 1957,based on indicated new orders for guided miSSiles and for the Navy Sea Master seaplane. TechnicallY,ability to penetrate the last remaining overhead supply at 44 would be most constructive and the 18-month accumu- lation base formed would indicate a possible 90. With the addition of Martin to our recommended list,we are elimina- ting Black & Decker which was originally recommended at 19.This stock has a long term potential of 55-60 but has advanced sharply since its original recommendation and we are,therefore,suggesting taking profits and SWitch- ing into other issues in our recommended list. – . ThiS market letter IS not and under no Clrcumstunces 15 to be construed as. an ofTer to !leU or a lItl.v llfU' fl;EQlitiGle!( referred to herem The mformatlon COntnllled herem IS not tt' to accurnc). or eompleteneis nnd the furnish1nj.! thereof i'!.b ernfth.r!iit'lee!f-b to be construed os, a rcpresentatlCln hy Wnlston & Co . Inc. All e'l(l)rCSlOns of OPInIOIl nrc subJect to change Without notiCe. or Stockholder thereof, may nn Interest Ifi the sccuntll'S mentioned herein ThiS market letter 1'1 intended and presenttlr nM'l!'Irayft'l \.!e'li't!rnP. Mrl')rnd.lYoJ'PimenWry on day to day m,lfkH nc\\'l and not as n complcte analYSIS AdditIOnal miormatlOn WIth respect to un). secUrities referred to herem will be iurlllshed upon request, WN 301 i.,llIla,IIIII h. . . . i .11,1