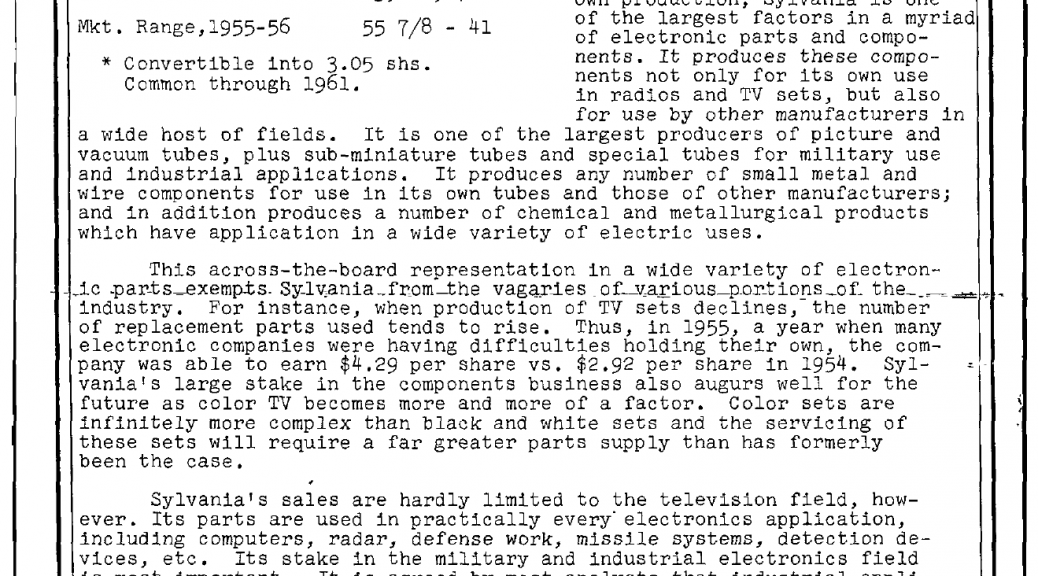 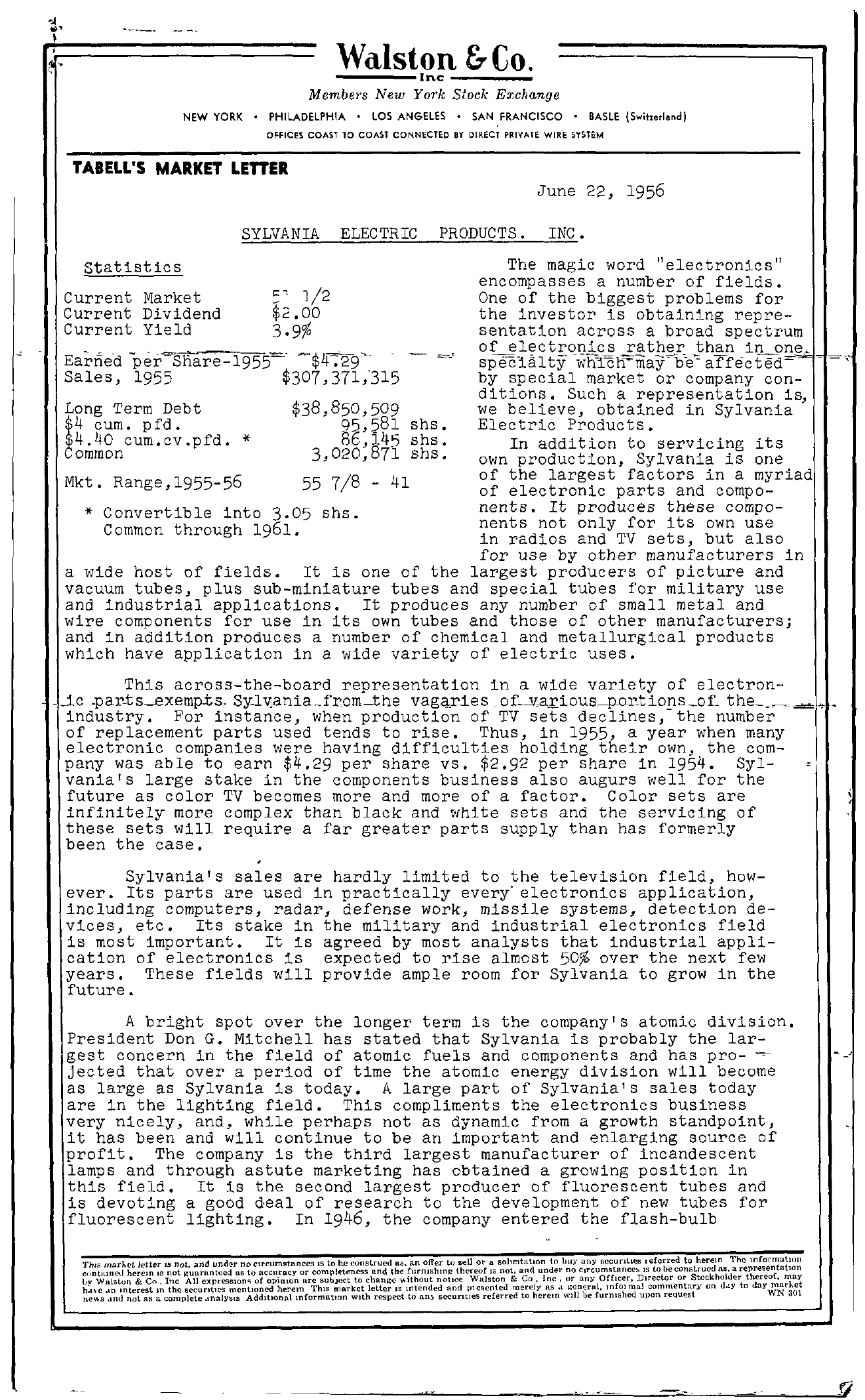 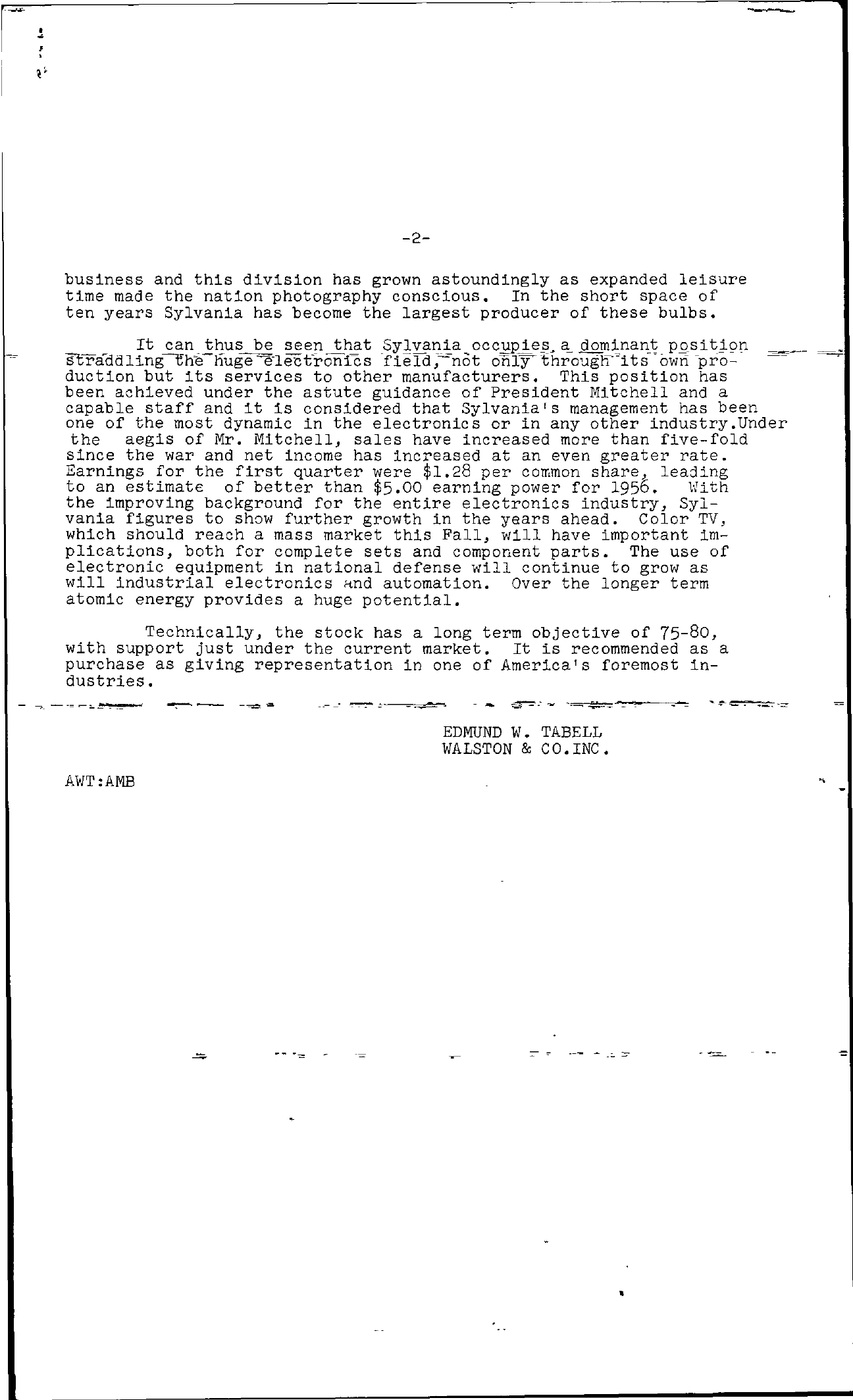 Walston &- Co. – – – – – I n c Members New YOk Stock Exchange NEW YORK PHILADELPHIA LOS ANGELES SAN FRANC'SCO BASLE (Swa,.,laod) OFFICES COAST TO COAST CONNECTED BY DIRECT PRIVATE WIRE SYSTEM TABELL'S MARKET LEnER June 22, 1956 SYLVANIA ELECTRIC PRODUCTS. INC. Statistics The magic word electronics encompasses a number of fields. Current Market ' 1/2 One of the biggest problems for Current Dividend 2.00 the investor is obtaining repre- Current Yield 3.9 sentation across a broad spectrum of .. ' specialty whTcli-may be- affected- -, by special market or company con- ditions. Such a representation Long Term Debt 38,850,509 we believe, obtained in Sylvania i4 cum. pfd. 4.40 cum.cv.pfd. ommon 95,581 shs. 86,14'5 shs. 3,020,871 shs. Electric Products. In addition to servicing its own production, Sylvania is one Mkt. Range,1955-56 55 7/8 – 41 of the largest factors in a myriad of electronic parts and compo- Convertible into 3.05 shs. Common through 1961. nents. It produces these components not only for its own use in radios and TV sets, but also for use by other manufacturers in a wide host of fields. It is one of the largest producers of picture and vacuum tubes, plus sub-miniature tubes and special tubes for military use and industrial applications. It produces any number of small metal and wire components for use in its own tubes and those of other manufacturers; and in addition produces a number of chemical and metallurgical products which have application in a wide variety of electric uses. This across-the-board representation in a wide variety of electron- – -.ic Sylv,aniafr.omthe vag.ries ofv;ax'iousp.ortionsof. industry. For instance, when production of TV sets declines,-the number of replacement parts used tends to rise. Thus, in 1955, a year when many electronic companies were having difficulties holding their own, the com- pany was able to earn 4.29 per share vs. 2.92 per share in 1954. Syl- vania's large stake in the components business also augurs well for the future as color TV becomes more and more of a factor. Color sets are infinitely more complex than black and white sets and the servicing of these sets will require a far greater parts supply than has formerly been the case. . Sylvania's sales are hardly limited to the television field, however. Its parts are used in practically every electronics application, including computers, radar, defense work, missile systems, detection devices, etc. Its stake in the military and industrial electronics field is most important. It is agreed by most analysts that industrial application of electronics is expected to rise almost 50 over the next few years. These fields will provide ample room for Sylvania to grow in the future. A bright spot over the longer term is the company's atomic division. President Don G. Mitchell has stated that Sylvania is probably the largest concern in the field of atomic fuels and components and has projected that over a period of time the atomic energy division will become as large as Sylvania is today. A large part of Sylvania's sales today are in the lighting field. This compliments the electronics business very nicely, and, while perhaps not as dynamic from a growth standpoint, it has been and will continue to be an important and enlarging source of profit. The company is the third largest manufacturer of incandescent lamps and through astute marketing has obtained a growing position in this field. It is the second largest producer of fluorescent tubes and is devoting a good deal of research to the development of new tubes for fluorescent lighting. In 1946, the company entered the flash-bulb –' ThIS market Jettl'r IS not, and under no clTcumstnnces IS to he construed as. an offer to sell or a 6ohcltat\on to huy any seCUrlt.les lcferred to herem The informatIOn c(lntlllned herem IS not J,tuarantced as to accuracy or completeness and the furnishing thereof IS not, and under no ClrC\lmstance! IS to beconst.ruetJ as, a by Walston & Cn Inc All expresslon; of opimon nrc subJeet to chanllc ithout notice Walston & Co. Inc, or any Officer, Director or Stockhold(r thereo may h.l\c.ln Interest the! securities mentIOned herem ThiS market letter IS Intended and (Jlcscnted merely IlS .1 ,,encrnl, 1nfO! m.al commentary on dJ.Y to day J.ntI ilot IlS a complete .maIY!;ls Additional informatIOn With respect to an), secUrities referred to herem Will be furnished UjlOn request 3 –. -2- business and this division has grown astoundingly as expanded leisure time made the nation photography conscious. In the short space of ten years Sylvania has become the largest producer of these bulbs. It can thus be seen that Sylvania dominant Straaaling-the-fluge e-lectronics field;-not only throug;J1Hi-own -pro- duction but its services to other manufacturers. This position has been achieved under the astute guidance of President Mitchell and a capable staff and it is considered that Sylvania's management has been one of the most dynamic in the electronics or in any other industry.Under the aegis of Mr. Mitchell, sales have increased more than five-fold since the war and net income has increased at an even greater rate. Earnings for the first quarter were 1.28 per COffimon share, leading to an estimate of better than 5.00 earning power for 1956. With the improving background for the entire electronics industry, Syl- vania figures to show further growth in the years ahead. Color TV, which should reach a mass market this Fall, will have important im- plications, both for complete sets and component parts. The use of electronic equipment in national defense will continue to grow as will industrial electronics automation. Over the longer term atomic energy provides a huge potential. Technically, the stock has a long term objective of 75-80, with support just under the current market. It is recommended as a purchase as giving representation in one of America's foremost industries. – – –EDMUND W. TABELL WALSTON & CO.INC. AWTAMB ,