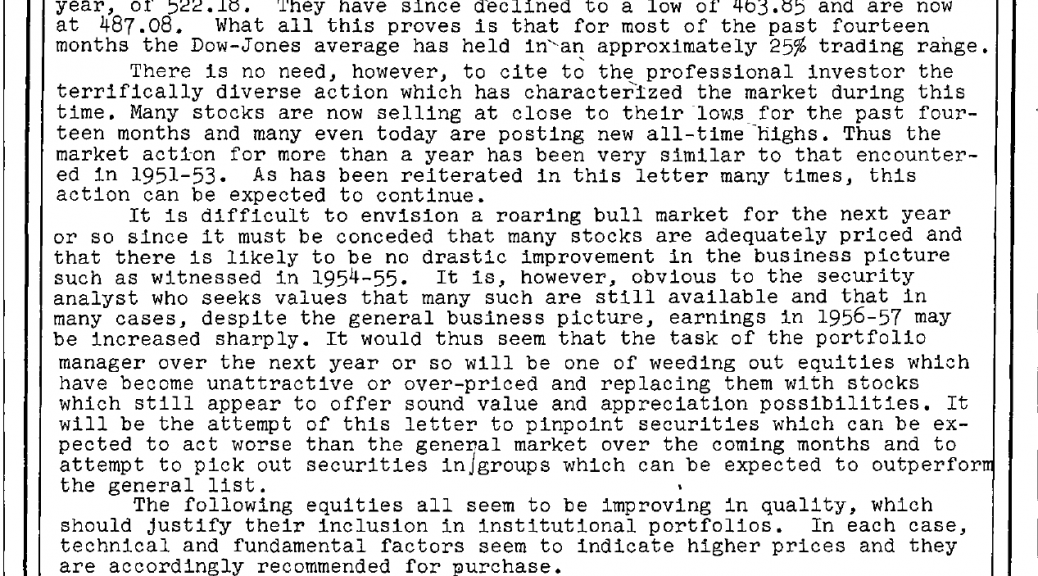 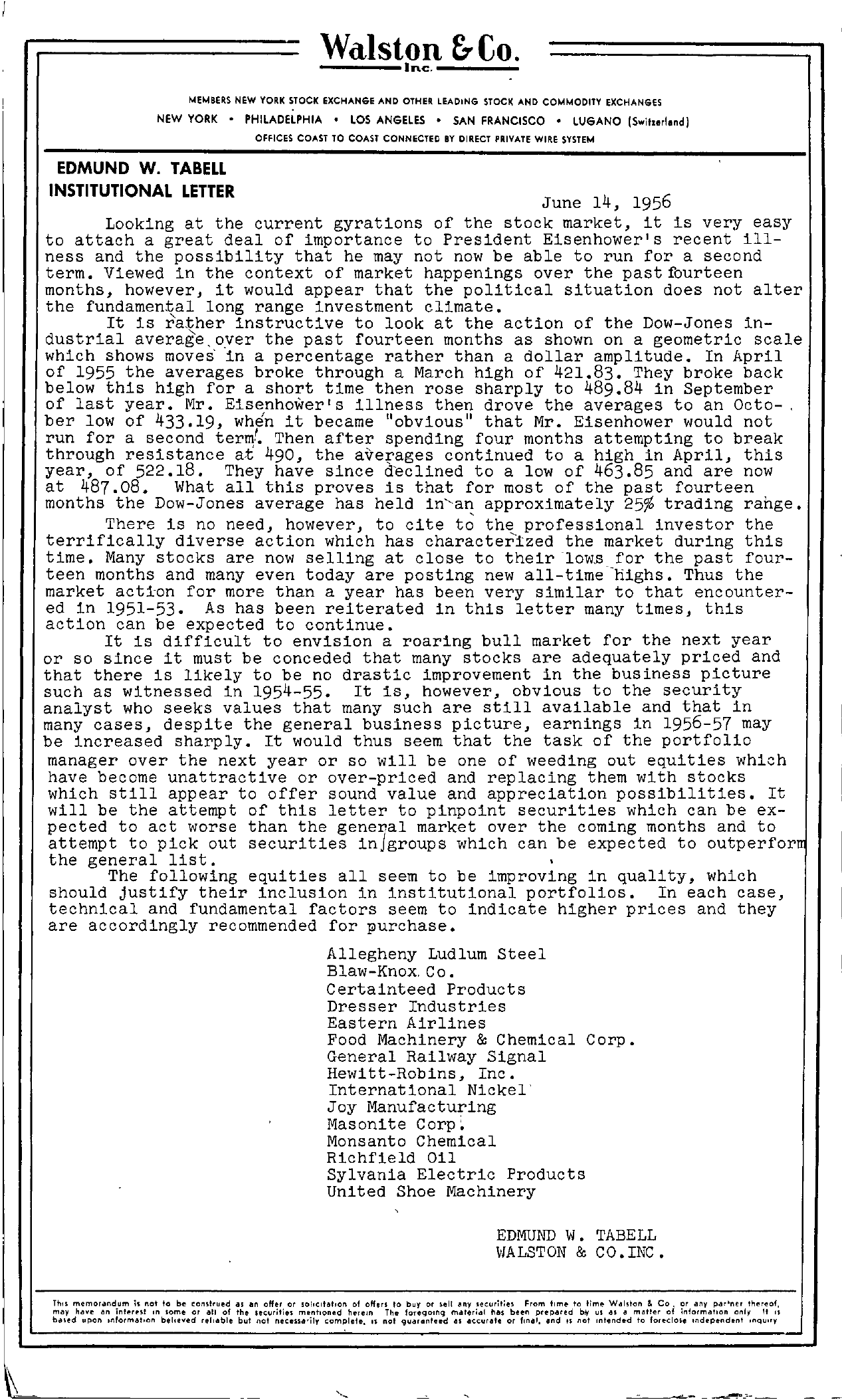 Walston &- Co. Inc. MEMBERS NEW YORK STOCK EXCHANGE AND OTHER lEADING STOCI( AND COMMODITY EXCHANGES NEW YORK PHILADELPHIA LOS ANGELES SAN FRANCISCO LUGANO (Switmld I OFfiCES COAST TO COAST CONNECTEC BY DIRECT PRIVATE WIRE SYSTEM EDMUND W. TABELL INSTITUTIONAL LETTER June 14, 1956 Looking at the current gyrations of the stock market, it is very easy to attach a great deal of importance to PreSident Eisenhower's recent ill- ness and the possibility that he may not now be able to run for a second term. Viewed in the context of market happenings over the past fourteen months, however, it would appear that the political situation does not alter the fundamental long range investment climate. It is rather instructive to look at the action of the Dow-Jones in- dustrial average,over the past fourteen months as shown on a geometric scale which shows moves' in a percentage rather than a dollar amplitude. In April of 1955 the averages broke through a March high of 421.83. They broke back below this high for a short time then rose sharply to 489.84 in September of last year. Mr. Eisenhower's illness then drove the averages to an Octo-, ber low of 433.19, when it became obvious that Mr. Eisenhower would not run for a second terll'\l. Then after spending four months attempting to break through resistance at 490, the averages continued to a high in April, this year, of 522.18. They have since declined to a low of 463.85 and are now at 487.08. What all this proves is that for most of the past fourteen months the Dow-Jones average has held approximately 25 trading range. There is no need, however, to cite to the professional investor the terrifically diverse action which has characterized the market during this time. Many stocks are now selling at close to their low,s for the past four- teen months and many even today are posting newall-time –highs. Thus the market action for more than a year has been very similar to that encounter- ed in 1951-53. As has been reiterated in this letter many times, this action can be expected to continue. It is difficult to enviSion a roaring bull market for the next year or so since it must be conceded that many stocks are adequately priced and that there is likely to be no drastic improvement in the business picture such as witnessed in 1954-55. It is, however, obvious to the security analyst who seeks values that many such are still available and that in many cases, despite the general business picture, earnings in 1956-57 may be increased sharply. It would thus seem that the task of the portfolio manager over the next year or so will be one of weeding out equities which have become unattractive or over-priced and replacing them with stocks which still appear to offer sound value and appreciation possibilities. It will be the attempt of this letter to pinpoint securities which can be ex- pected to act worse than the general market over the coming months and to attempt to pick out securities inJgroups which can be expected to outperforn the general list. ' The following equities all seem to be improving in quality, which should justify their inclusion in institutional portfolios. In each case, technical and fundamental factors seem to indicate higher prices and they are accordingly recommended for purchase. Allegheny Ludlum Steel Blaw-Knox,Co. Certainteed Products Dresser Industries Eastern Airlines Food Machinery & Chemical Corp. General Railway Signal Hewitt-Robins, Inc. International Nickel' Joy Manufacturing Masonite Corp Monsanto Chemical Richfield 011 Sylvania Electric Products United Shoe Machinery EDMUND W. TABELL WALSTON & CO.INC. Th,s memorandum is lIot 10 be construed as lin offer or soliCitation of offers 10 buy or ,ell any securities from time to time Walston & Co. or any par'ner thereof, may have an inierul In some or all of the securitin mentioned herein The foregOing material has been prepared bl1 us as a matter of inlormo!llion on1r It IS baled upon ,formatoon believed reliable but not necessaily complete. IS not gUdrdnteed lIS IIccurate or flnlli. and n nat Inlended to foreclose Independenl ,nqulry