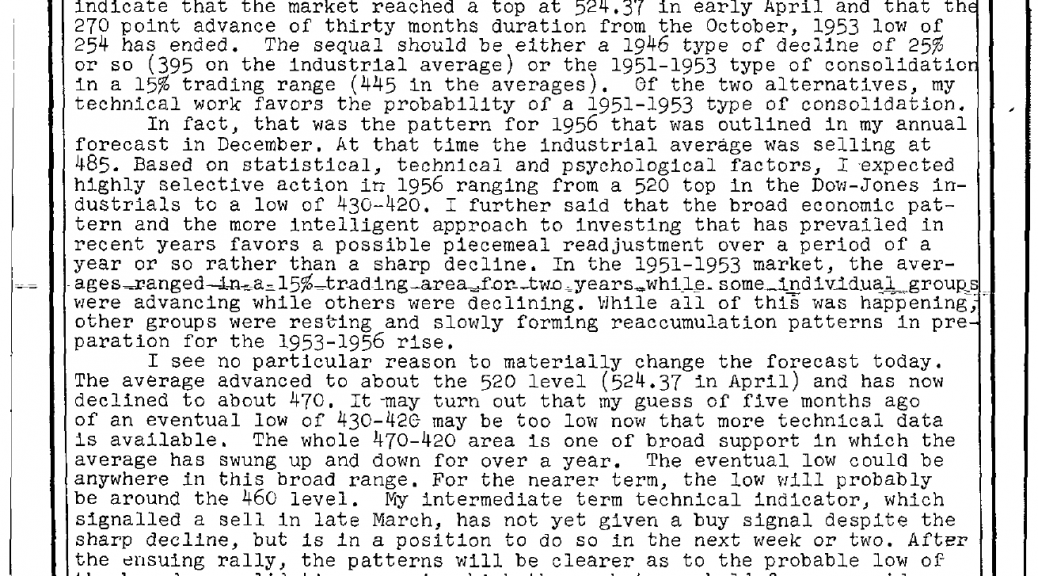 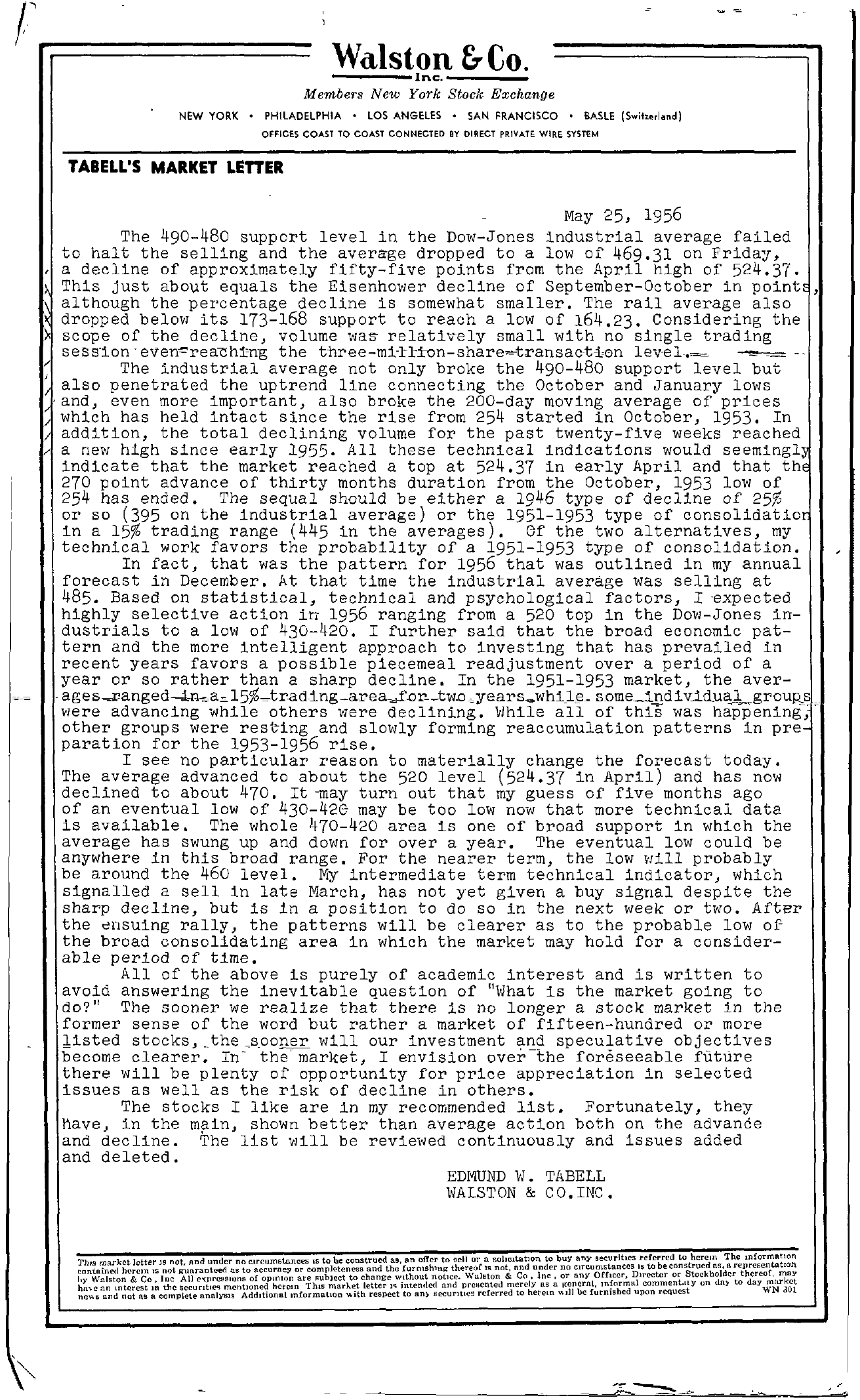 rr. Walston &- Co. – – – – I n c . Members New York Stock Exchange NEW YORK PHILADELPHIA LOS ANGELES SAN FRANCISCO BASLE (Sw;t,.,lond) OFFICES COAST TO COAST CONNECTED BY DIRECT PRIVATE WIRE SYSTEM TABEll'S MARKET lEnER May 25, 1956 The 490-480 support level in the Dow-Jones industrial average failed to halt the selling and the average dropped to a low of 469.31 on Friday, , a decline of approximately fifty-five pOints from the April high of 524.37. This just about equals the Eisenhower decline of September-October in pOint , \ although the percentage decline is somewhat smaller. The rail average also dropped below its 173-168 support to reach a low of 164.23. Considering the scope of the decline, volume was relatively small with no single trading sess'ion 'even''reach!ng the three-mi'll-i-on-share-t.ransact'ken lev,el. The industrial average not only broke the 490-480 support level but also penetrated the uptrend line connecting the October and January lows and, even more important, also broke the 200-day moving average of prices / which has held intact since the rise from 254 started in October, 1953. In / addition, the total declining volume for the past twenty-five weeks reached a new high since early 1955. All these technical indications would indicate that the market reached a top at 524.37 in early April and that thE 270 point advance of thirty months duration from the October, 1953 low of 254 has ended. The sequal should be either a 1946 type of decline of 25 or so (395 on the industrial average) or the 1951-1953 type of consolidatior in a 15 trading range (445 in the averages). Of the two alternatives, my technical work favors the probability of a 1951-1953 type of consolidation. In fact, that was the pattern for 1956 that was outlined in my annual forecast in December. At that time the industrial average was selling at 485. Based on statistical, technical and psychological factors, I 'expected highly selective action in 1956 ranging from a 520 top in the Dow-Jones in- dustrials to a low of 430-420. I further said that the broad economic pat- tern and the more intelligent approach to investing that has prevailed in recent years favors a possible piecemeal readjustment over a period of a year or so rather than a sharp decline. In the 1951-1953 market, the aver- . age s tw,o someind i were advancing while others were declining. While all of was happening, other groups were resting and slowly forming reaccumulation patterns in pre- paration for the 1953-1956 rise. I see no particular reason to materially change the forecast today. The average advanced to about the 520 level (524.37 in April) and has now declined to about 470. It turn out that my guess of five months ago of an eventual low of 430-420 may be too low now that more technical data is available. The whole 470-420 area is one of broad support in which the average has swung up and down for over a year. The eventual low could be anywhere in this broad range. For the nearer term, the low will probably be around the 460 level. My intermediate term technical indicator, which signalled a sell in late March, has not yet given a buy signal despite the sharp decline, but is in a position to do so in the next week or two. After the ensuing rally, the patterns will be clearer as to the probable low of the broad consolidating area in which the market may hold for a considerable period of time. All of the above is purely of academic interest and is written to avoid answering the inevitable question of vlhat is the market going to do The sooner we realize that there is no longer a stock market in the former sense of the word but rather a market of fifteen-hundred or more 1isted stocks, the s,ooner will our investment and speculative objectives become clearer. In – the'market, I envision over -the foreseeable future there will be plenty of opportunity for price appreciation in selected issues as well as the risk of decline in others. The stocks I like are in my recommended list. Fortunately, they have, in the main, shown better than average action both on the advance and decline. and deleted. The list will be reviewed continuously and issues added EDMUND vi. TABELL HAISTON & CO. INC. ThIS market Jetter lS not nnd under no circumstances IS to he construed as, an offer to seJl or n sohcltatlOn to buy any securities referred to herem The mformntlon contnined herem IS not ns to nccurnCY or CQmpieteness and the thereoC IS not, and under no Circumstances IS to be construedhn1d8 I Walston & Co Inc Ail ('xprCSSIt)ns of opinion are Rubect to change without notIce. \\'1118ton & Co, Inc, or I1ny Officer, Director or tock 0 cr ereo, may an Interest thc secunbe! mcntlOned herein ThiS market letter 1; intended and prcllcnted merely as a Iteneral, un to day llC…. S and not I\S a complete Addltionalmformatl)n 'ftith respect to an) securities referred to heteln 'Ill be furnished upon rcques