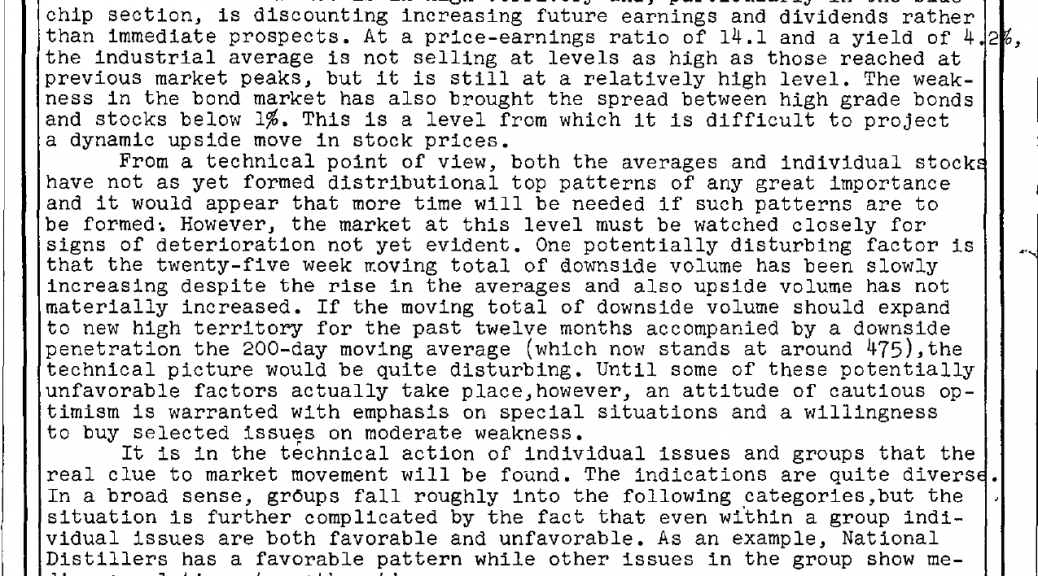 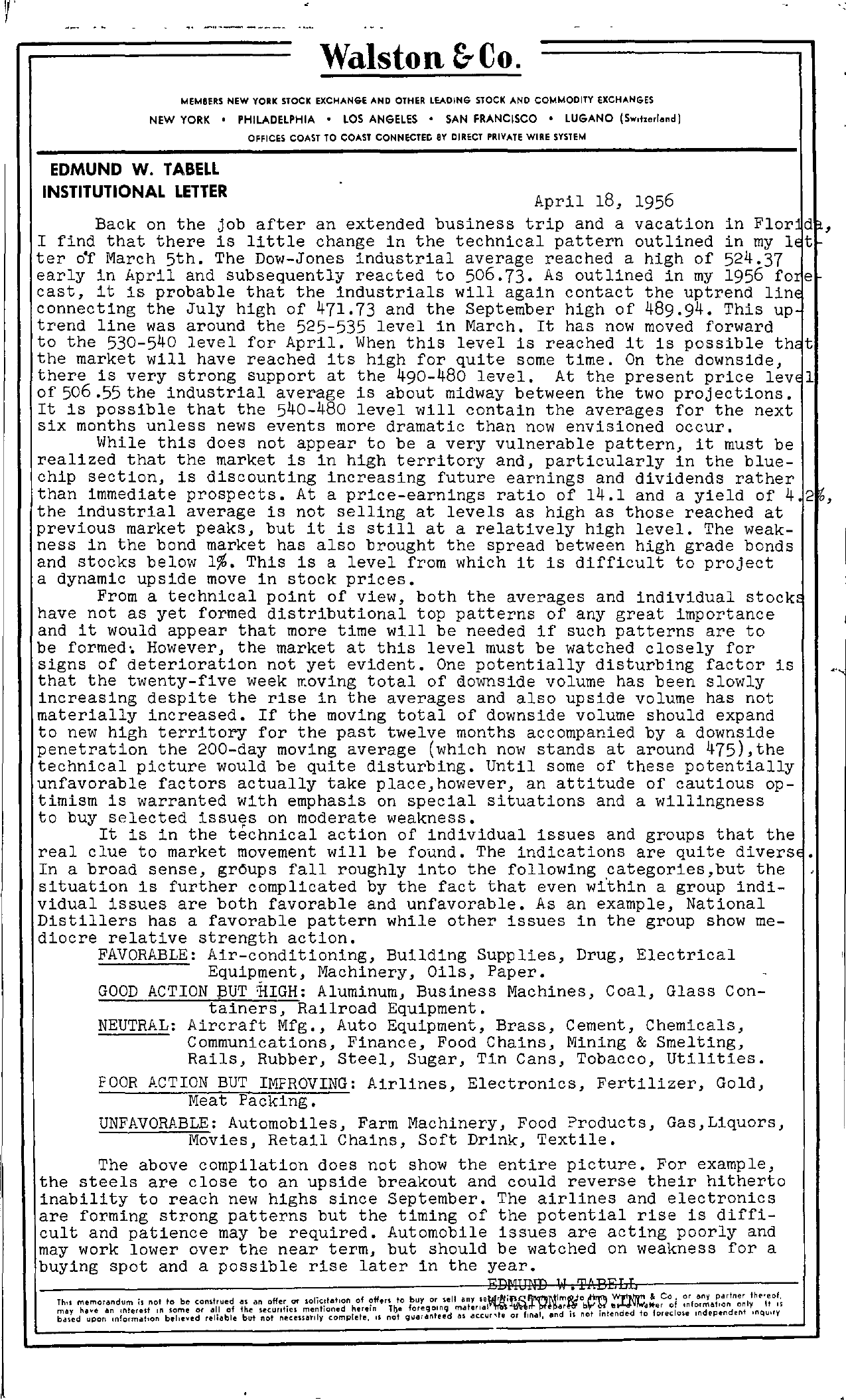 Walston 5- Co. MEMBERS NEW YORK STOCK EXCHANGE AND OTHER LEADING STOCK AND COMMODITY EXCHANGES NEW YORK PHILADELPHIA LOS ANGELES SAN FRANCISCO LUGANO (Swoheda.d) OFFICES COAST TO COAST CONNKTEC BY DIRECT PRIVATE WIRE SYSTEM EDMUND W. TABELL INSTITUTIONAL LETTER April 18, 1956 Back on the job after an extended business trip and a vacation in I find that there is little change in the technical pattern outlined in my let ter df March 5th. The Dow-Jones industrial average reached a high of 524.37 early in April and subsequently reacted to 506.73. As outlined in my 1956 fore cast, it is probable that the industrials will again contact the uptrend line connecting the July high of 471.73 and the September high of 489.94. This up- trend line was around the 525-535 level in March. It has now moved forward to the 530-540 level for April. When this level is reached it is possible th,t the market will have reached its high for quite some time. On the downSide, there is very strong support at the 490-480 level. At the present price level of 506 .55 the industrial average is about midway between the two projections. It is possible that the 540-480 level will contain the averages for the next six months unless news events more dramatic than now envisioned occur. vlhile this does not appear to be a very vulnerable pattern, it must be realized that the market is in high territory and, particularly in the blue- chip section, is discounting increaSing future earnings and dividends rather than immediate prospects. At a price-earnings ratio of 14.1 and a yield of 4 the industrial average is not selling at levels as high as those reached at previous market peaks, but it is still at a relatively high level. The weak- ness in the bond market has also brought the spread between high grade bonds and stocks below 1. This is a level from which it is difficult to project a dynamic upside move in stock prices. From a technical point of view, both the averages and individual stockE have not as yet formed distributional top patterns of any great importance and it would appear that more time will be needed if such patterns are to be However, the market at this level must be watched closely for signs of deterioration not yet evident. One potentially disturbing factor is that the twenty-five week total of downside volume has been slowly increasing despite the rise in the averages and also upside volume has not materially increased. If the moving total of downside volume should expand to new high territory for the past twelve months accompanied by a downside penetration the 200-day moving average (which now stands at around 475),the technical picture would be quite disturbing. Until some of these potentially unfavorable factors actually take place,however, an attitude of cautious op- timism is warranted with emphasis on special situations and a willingness to buy selected issues on moderate weakness. It is in the technical action of individual issues and groups that the real clue to market movement will be found. The indications are quite diverse. In a broad sense, groups fall roughly into the following categories,but the situation is further complicated by the fact that even within a group indi- vidual issues are both favorable and unfavorable. As an example, National Distillers has a favorable pattern while other issues in the group show me- diocre relative strength action. FAVORABLE Air-conditioning, Building Supplies, Drug, Electrical EqUipment, Machinery, Oils, Paper. – GOOD ACTION BUT iUGH Aluminum, Business Machines, Coal, Glass Con- tainers, Railroad Equipment. NEUTRAL Aircraft Mfg., Auto Equipment, Brass, Cement, Chemicals, Communications, Finance, Food Chains, Mining & Smelting, Rails, Rubber, Steel, Sugar, Tin Cans, Tobacco, Utilities. FOOR ACTION BUT IMFROVING Airlines, ElectroniCS, Fertilizer, Gold, Meat Packing. UNFAVORABLE Automobiles, Farm Machinery, Food roducts, Gas,Liquors, Movies, Retail Chains, Soft Drink, Textile. The above compilation does not show the entire picture. For example, the steels are close to an upside breakout and could reverse their hitherto inability to reach new highs since September. The airlines and electronics are forming strong patterns but the timing of the potential rise is diffi- cult and patience may be required. Automobile issues are acting poorly and may work lower over the near term, but should be watched on weakness for a buying spot and a possible rise later in the year. BImmm ' .'l'ABELL Th,s memorandum is nol to be construed 051 an offer. or !.OIIC!tllllon 0f ff t'S to b uy or II any may hIt,,!! an Interest In some Of all of Ille secuntlu mentioned herein Tl)e foregOlnQ materia b.ued upon .nformaflon believed reliable but not neoeuatoly oomplete, not gual/lnteed /IS p.f!J!,,,,rHt' blr' bi WJ1II9'n & Cooi o.nrformatptaerntneornlythe'IeIof1,5 t f I d' t ' lended to foredose Independent InquHy II or Ina, /In no In