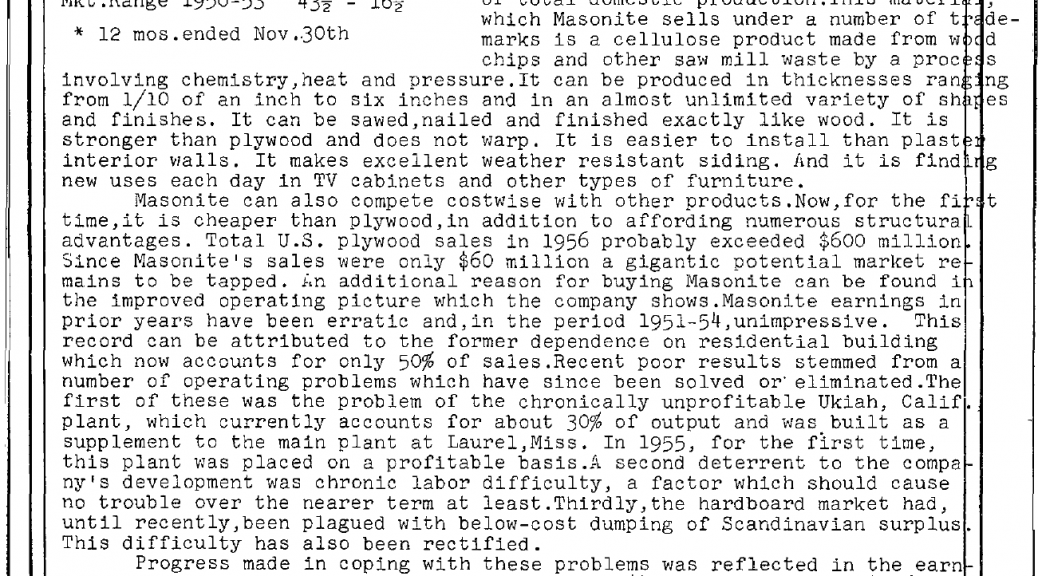 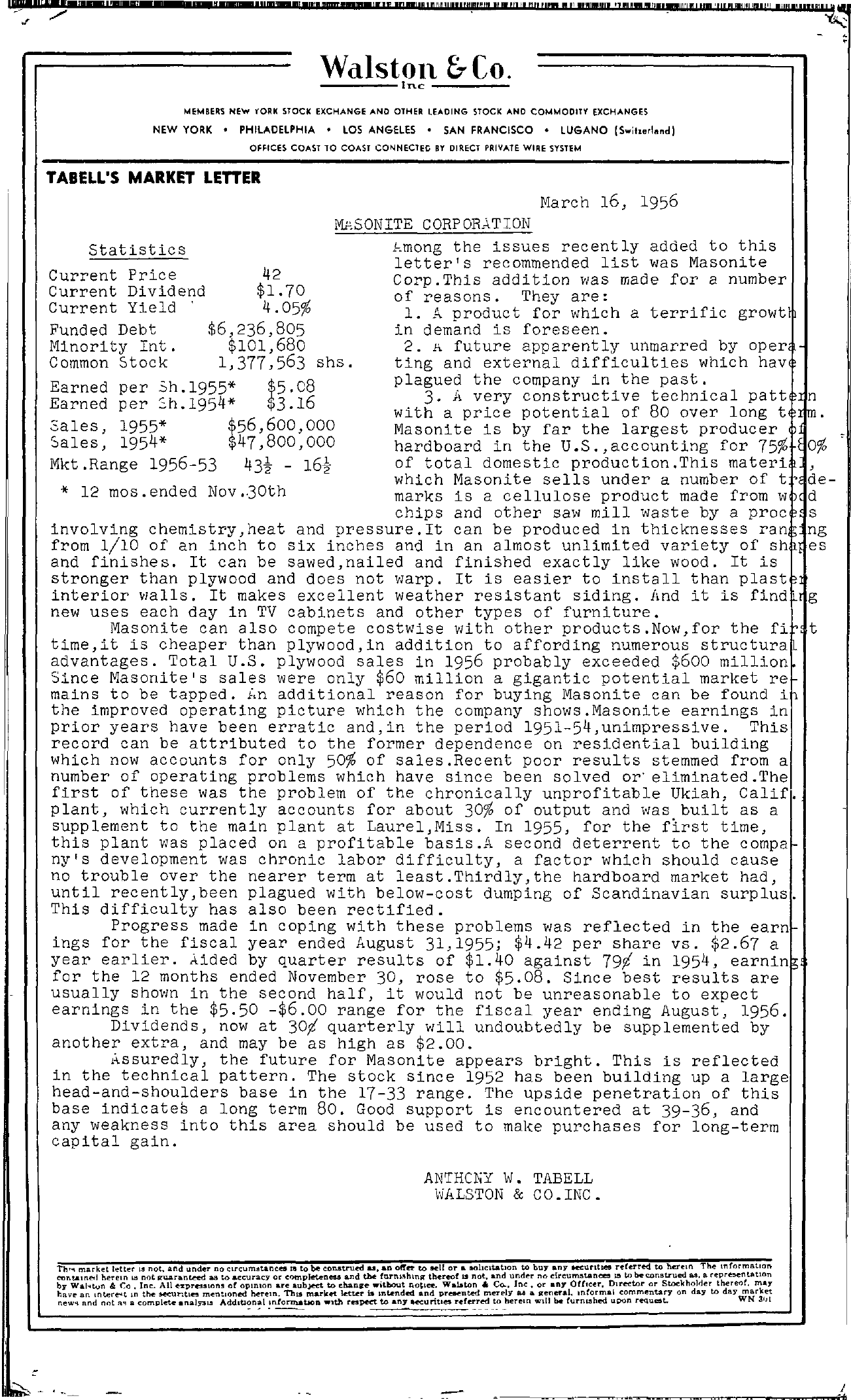 'f'J'''I'.'I!''''JP!,I7-' ''''''''''''!I!!I'lDp' IIJ! '!lnl'11 !!!lI!'W'I.,I, .,r, 11 m n'I IP,, -'I!nml!' 'flll'!!'!1 ' ,1111 1'1'111 '!lrr,,'I' 9 '., ./ ,- Walston &Co. – – – – I n c NEw lORI( STOCI( EXCHANGE ANO OTHER LEADING STOCI( AND COMt.oIODITV EXCHANGES NEW YORK PHILACELPHIA LOS ANGELES SAN FRANCISCO LUGANO (Switml.,dl OFFICES COAST TO COAST COt..lNECTEC BY DIRECT PRIVATE WIRE TABELL'S MARKET LEnER March 16, 1956 Mr,SONITE CORPORATION Statistics Current Price Current Dividend Current Yield' 42 1.70 4.05 the issues recently added to this letter's recommended list Vias Masonite Corp.This addition was made for a number of reasons. They are 1. A product for which a terrific growt Funded Debt 6,236,805 in demand is foreseen. Minority Int. 101,680 2. A future apparently unmarred by oper Common Stock 1,377,563 shs. ting and external difficulties which hav Earned per Sh.1955 5.08 Earned per 3.16 plagued the company in the past. 3. 11 very constructive technical patt n with a price potential of 80 over long t PJim. 3ales, 1955 56,600,000 Masonite is by far the largest producer Sales, 1954 47,800,000 hardboard in the U.S.,accounting for Mkt.Range 1956-53 – of total domestic production.This materi , 12 mos.ended Nov.30th which Masonite sells under a number of t demarks is a cellulose product made from VI d chips and other saw mill Vlaste by a proc s involving chemistry,heat and pressure.It can be produced in thicknesses ran ng from 1/10 of an inch to Six inches and in an almost unlimited variety of sh es and finishes. It can be sawed,nailed and finished exactly like wood. It is stronger than plywood and does not warp. It is eaSier to install than plast interior walls. It makes excellent weather resistant siding. And it is find g new uses each day in TV cabinets and other types of furniture. Masonite can also compete costwise with other products.Now,for the fib t time,it is cheaper than plywood,in addition to affording numerous structura advantages. Total U.S. plywood sales in 1956 probably exceeded 600 million Since Masonite's sales were only 60 million a gigantic potential market re mains to be tapped. I.n additional reason for buying Masonite can be found ill the improved operating picture which the company shows.Masonite earnings in prior years have been erratic and,in the period 1951-54,unimpressive. This record can be attributed to the former dependence on residential building which now accounts for only 50 of sales.Recent poor results stemmed from a number of operating problems which have since been solved or' eliminated.The first of these was the problem of the chronically unprofitable Ukiah, Calif. plant, which currently accounts for about 30 of output and was built as a supplement to the main plant at Laurel,Miss. In 1955, for the first time, this plant was placed on a profitable basis.A second deterrent to the compa ny's development was chronic labor difficulty, a factor which should cause no trouble over the nearer term at least.Thirdly,the hardboard market had, until recently, been plagued with below-cost dumping of Scandinavian surplus. This difficulty has also been rectified. Progress made in coping with these problems Vias reflected in the ings for the fiscal year ended August 31,1955; 4.42 per share vs. 2.67 a year earlier. Aided by quarter results of 1.40 against 797 in 1954, for the 12 months ended November 30, rose to 5.08. Since best results are usually shown in the second half, it would not be unreasonable to expect earnings in the 5.50 -6.00 range for the fiscal year ending August, 1956. Dividends, now at 307 quarterly will undoubtedly be supplemented by another extra, and may be as high as 2.00. Assuredly, the future for Masonite appears bright. This is reflected in the technical pattern. The stock Since 1952 has been building up a large head-and-shoulders base in the 17-33 range. The upside penetration of this base indicates a long term 80. Good support is encountered at 39-36, and any weakness into this area should be used to make purchases for long-term capital gain. ANTHCKY W. TABELL \,iALSTON & CO.INC. Tnt.. market letter I not and under no 115 to be … an offft to Hif or a aoilCltatlon to buy any Heurltte5 referred to herem The Informat'on contelneol hereIn 15 not R'u.art.nt.eed u to accuracy or and the thereof 13 not. and under no eircun'Ultanee 1!1 to Me.onstrued &.. a representatiOn by Wal..ton Co. Inc. All UpreslilOn! or opinIon are aub)ect, to ehanee without Walston II Co… Inc. or any OftlCer. Director or Stoekholtler there-of. may have an tntere-t In the ment,oned het'em ThIll market letter b Intended and presented merely U a general, Informal commentary on day to day market new'\ nnd not a complete ,nalpl! !ntonnauoD With respect to any ,unties Will M turnl.'!!hed upon request. WN 311t