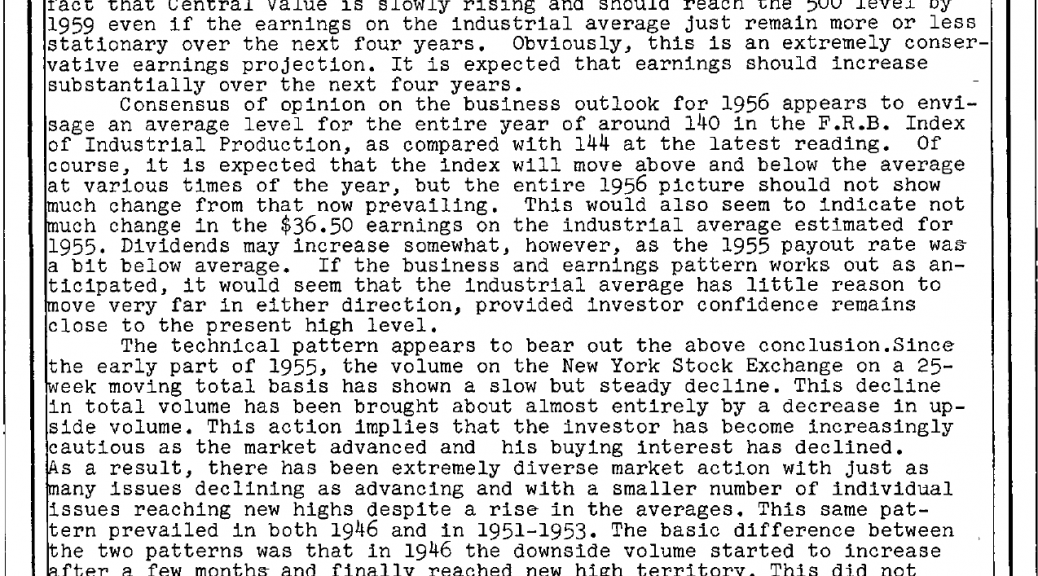 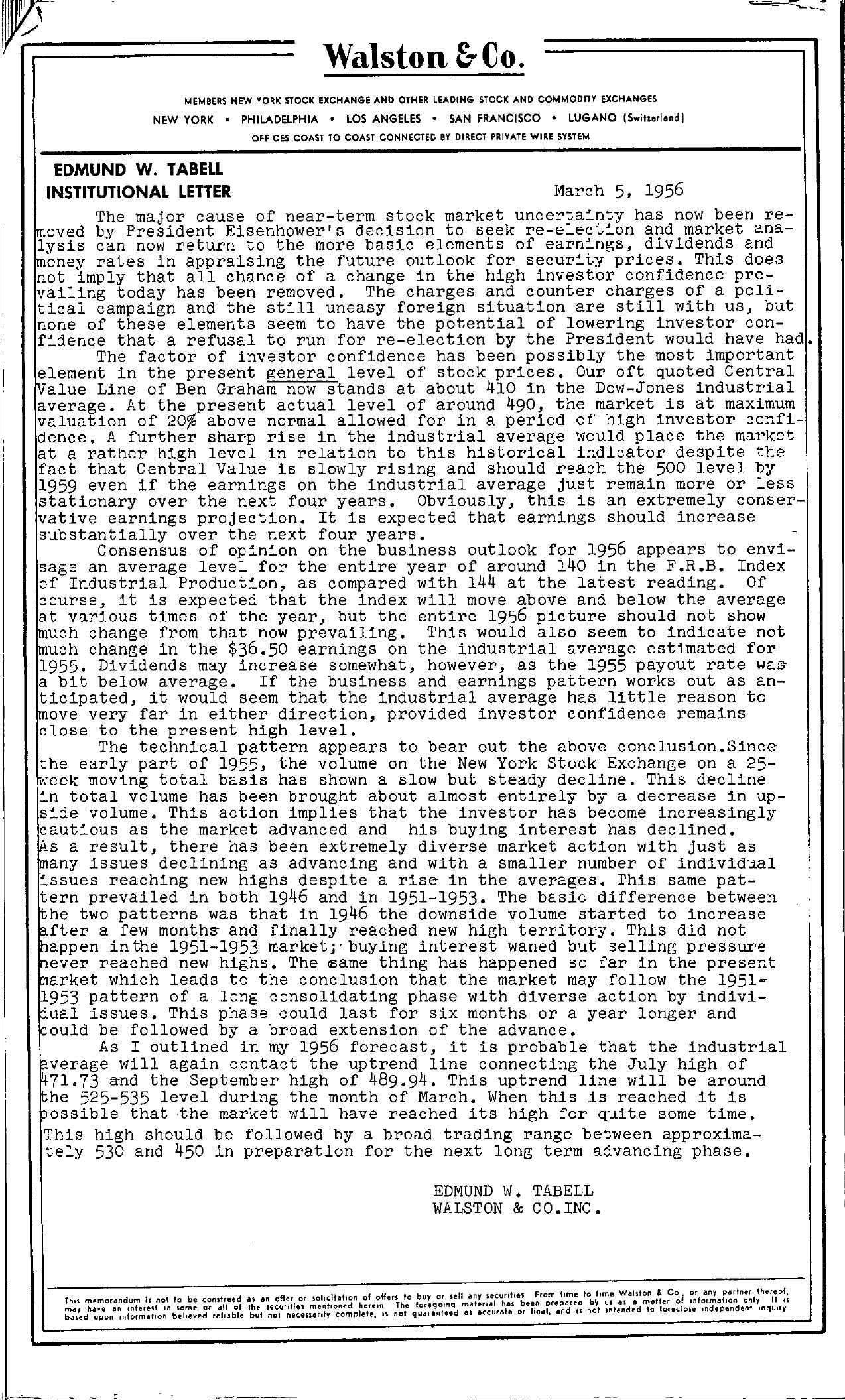 Walston &Co. MEMBERS NEW YORK STOCK EXCHANGE AND OTHER LEADING STOCK AND COMMODITY EXCHANGES NEW YORK PHILADELPHIA LOS ANGELES SAN FRANCISCO LUGANO ISwHml ..d) OfFICES COAST TO COAST CONNECTEC BY DIRECT PRIVATE WIRE SYSTEM EDMUND W. TABELL INSTITUTIONAL LETTER March 5, 1956 The major cause of near-term stock market uncertainty has now been re- by President Eisenhower's decision to seek re-election and market ana- lysis can now return to the more basic elements of earnings, dividends and money rates in appraising the future outlook for security prices. This does not imply that all chance of a change in the high investor confidence pre- vailing today has been removed. The charges and counter charges of a poli- tical campaign and the still uneasy foreign situation are still with us, but none of these elements seem to have the potential of lowering investor con- fidence that a refusal to run for re-election by the President would have had. The factor of investor confidence has been possibly the most important element in the present general level of stock prices. Our oft quoted Central Value Line of Ben Graham now stands at about 410 in the Dow-Jones industrial average. At the present actual level of around 490, the market is at maximum valuation of 20 above normal allowed for in a period of high investor confi- dence. A further sharp rise in the industrial average would place the market at a rather high level in relation to this historical indicator despite the fact that Central Value is slowly rising and should reach the 500 level by 1959 even if the earnings on the industrial average just remain more or less stationary over the next four years. Obviously, this is an extremely conser- vative earnings projection. It is expected that earnings should increase substantially over the next four years. – Consensus of opinion on the business outlook for 1956 appears to envi- sage an average level for the entire year of around 140 in the F.R.B. Index of Industrial Production, as compared with 144 at the latest reading. Of course, it is expected that the index will move above and below the average at various times of the year, but the entire 1956 picture should not show much change from that now prevailing. This would also seem to indicate not change in the 36.50 earnings on the industrial average estimated for 1955. Dividends may increase somewhat, however, as the 1955 payout rate a bit below average. If the business and earnings pattern works out as an- ticipated, it would seem that the industrial average has little reason to very far in either direction, provided investor confidence remains close to the present high level. The technical pattern appears to bear out the above conclusion.Since the early part of 1955, the volume on the New York Stock Exchange on a 25- week moving total basis has shown a slow but steady decline. This decline in total volume has been brought about almost entirely by a decrease in up- side volume. This action implies that the investor has become increaSingly cautious as the market advanced and his buying interest has declined. As a result, there has been extremely diverse market action with just as many issues declining as advancing and with a smaller number of individual issues reaching new highs despite a rise in the averages. This same pat- tern prevailed in both 1946 and in 1951-1953. The basic difference between the two patterns was that in 1946 the downside volume started to increase ffter a few months and finally reached new high territory. This did not rappen inthe 1951-1953 marketj'buying interest waned but selling pressure rever reached new highs. The thing has happened so far in the present which leads to the conclUSion that the market may follow the 1951 1953 pattern of a long consolidating phase with diverse action by indivi- issues. This phase could last for six months or a year longer and be followed by a broad extension of the advance. As I outlined in my 1956 forecast, it is probable that the industrial will again contact the uptrend line connecting the July high of the September high of 489.94. This uptrend line will be around 525-535 level during the month of March. When this is reached it is possible that the market will have reached its high for quite some time. This high should be followed by a broad trading range between approximately 530 and 450 in preparation for the next long term advancing phase. EDMUND W. TABELL WALSTON & CO.INC. Th memorandum is not 10 be construed as an offer or , soliCitation 'ff 0 0 et' to b uy or se II 'fly SteUf. t !fll From medtobliImae Ws aaldomnat&terCooi oInrfoarmnyollptlolnrlnoenr lythtrIetofIS, bet ,m!lY have 'In mterest In some or at' of the seCUrities mentioned herem The foregOing maler,,1 hH to foredole .ndependent mqulry based upon Information behe … ed retl1bte but not neteUoIInty complete, IS not gU1ranteed 0111 accuroll e or Ina, an n