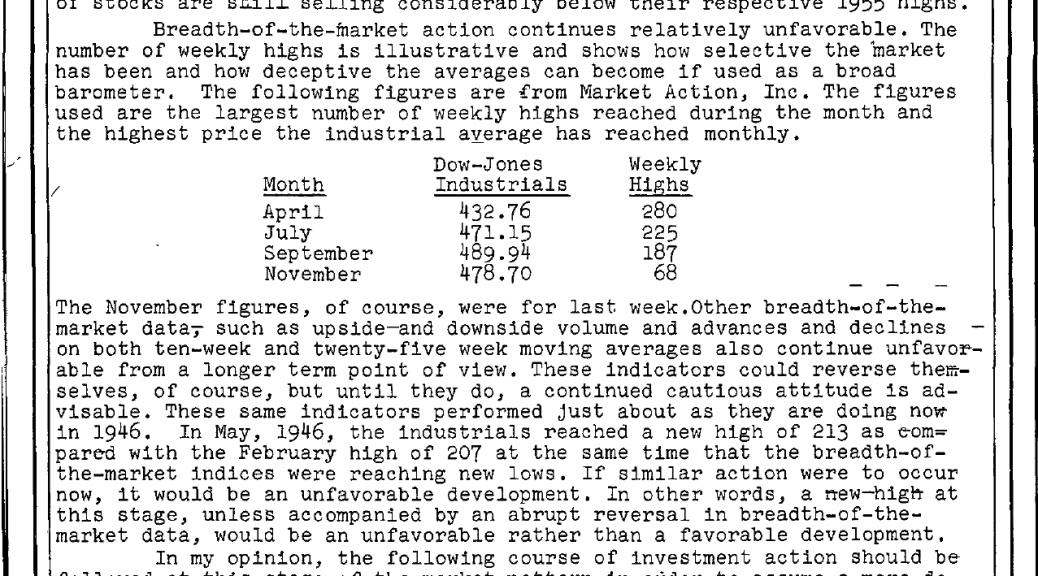 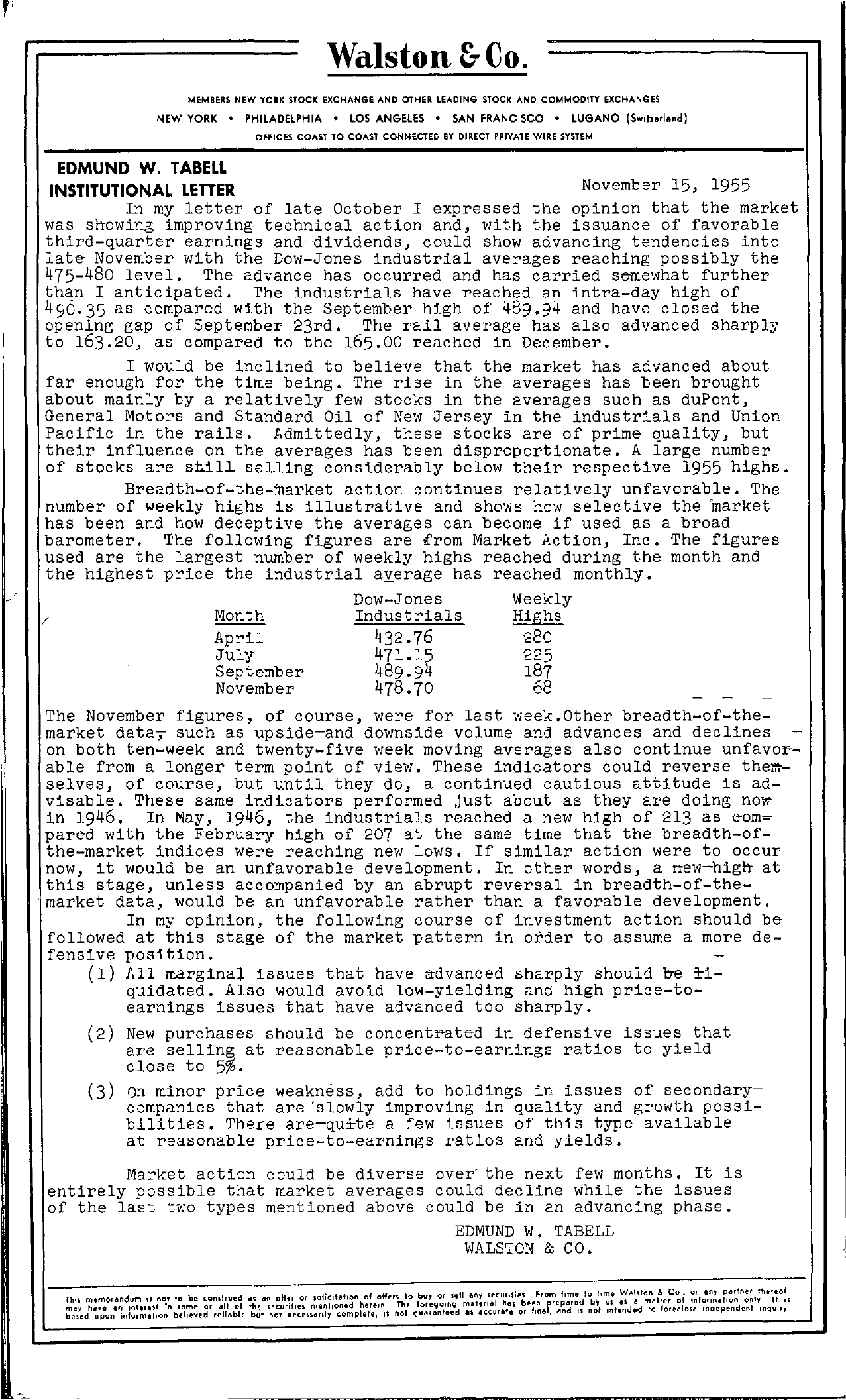 Walston 5- Co. MEMBERS NEW 'fORK STOCK EXCHANGE AND OTHER LEADING STOCK AND COMMODITY EXCHANGES NEW YORK PHILADELPHIA LOS ANGELES SAN FRANCISCO LUGANO ISw,herl.,d) OFFICES COAST TO COAST CONNECTEC BY DIRECT PRIVATE WIRE SYSTEM EDMUND W. TABELL INSTITUTIONAL LETTER November 15, 1955 In my letter of late October I expressed the opinion that the market was showing improving technical action and, with the issuance of favorable third-quarter earnings and–dividends, could show advancing tendencies into November with the Dow-Jones industrial averages reaching possibly the 475-480 level. The advance has occurred and has carried semewhat further than I anticipated. The industrials have reached an intra-day high of 490.35 as compared with the September high of 489.94 and have closed the opening gap of September 23rd. The rail average has also advanced sharply to 163.20, as compared to the 165.00 reached in December. I would be inclined to believe that the market has advanced about far enough for the time being. The rise in the averages has been brought about mainly by a relatively few stocks in the averages such as duPont, General Motors and Standard Oil of New Jersey in the industrials and Union Pacific in the rails. Admittedly, these stocks are of prime quality, but their influence on the averages has been disproportionate. A large number of stocks are still selling considerably below their respective 1955 highs. Breadth-of-the-rnarket action continues relatively unfavorable. The number of weekly highs is illustrative and shows how selective the market has been and how deceptive the averages can become if used as a broad barometer. The following figures are from Market Action, Inc. The figures used are the largest number of weekly highs reached during the month and the highest price the industrial ayerage has reached monthly. Dow-Jones Weekly I Month Industrials Highs April 432.76 280 July 471.15 225 September 489.94 187 November 478.70 68 The November figures, of course, were for last week.Other breadth-of-the- market data, such as upSide-and downside volume and advances and declines – on both ten-week and twenty-five week moving averages also continue able from a longer term point of view. These indicators could reverse them- selves, of course, but until they do, a continued cautious attitude is ad- visable. These same indicators performed just about as they are doing now in 1946. In May, 1946, the industrials reached a new high of 213 as with the February high of 207 at the same time that the breadth-of- the-market indices were reaching new lows. If similar action were to occur now, it would be an unfavorable development. In other words, a new-high at this stage, unless accompanied by an abrupt reversal in breadth-of-the- market data, would be an unfavorable rather than a favorable development. In my opinion, the following course of investment action should be followed at this stage of the market pattern in order to assume a more de- fensive position. – (1) All issues that have sharply should tre ri- quidated. Also would avoid low-yielding and high price-to- earnings issues that have advanced too sharply. (2 ) New purchases should be concentrated in defensive issues that are selling at reasonable price-to-earnings ratios to yield close to 5. (3) On minor price weakness, add to holdings in issues of secondary- companies that are 'slowly improving in quality and growth possi- bilities. There a few issues of this type available at reasonable price-to-earnings ratios and yields. Market action could be diverse over- the next few months. It is entirely possible that market averages could decline while the issues of the last two types mentioned above could be in an advancing phase. EDMUND VI. TABELL WALSTON & CO. This may memorandum n not to be hae an Interest in lome construed or all of , an offer or the securities 101l(lloilllon of offen to mentioned here.n The b IIY or a II any secur, t'In From foreqo,,,gd m,hrllli h,U bej tiamt'e,dtonb1,.mu,setetWInSd!eaIhdlomntoat&tfeorCreoc01l.oso'enrioIarnnmdyaeplploeanlr'dltneoennrt lytheIet ol1,5 bil5ed upon informatIon betleved reliable but not necusanly complete, IS not gUdran ee as accura e or Ina,