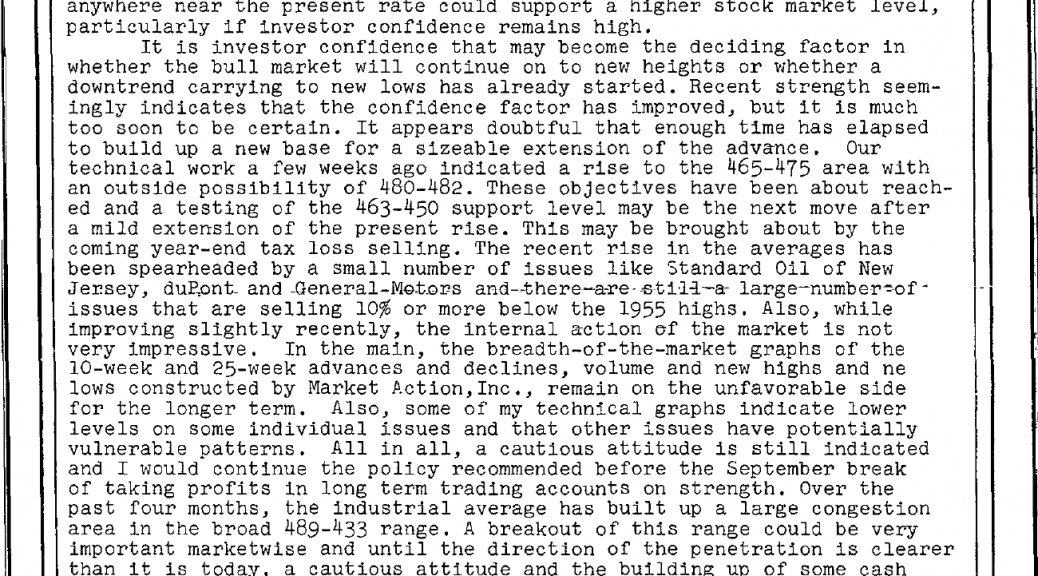 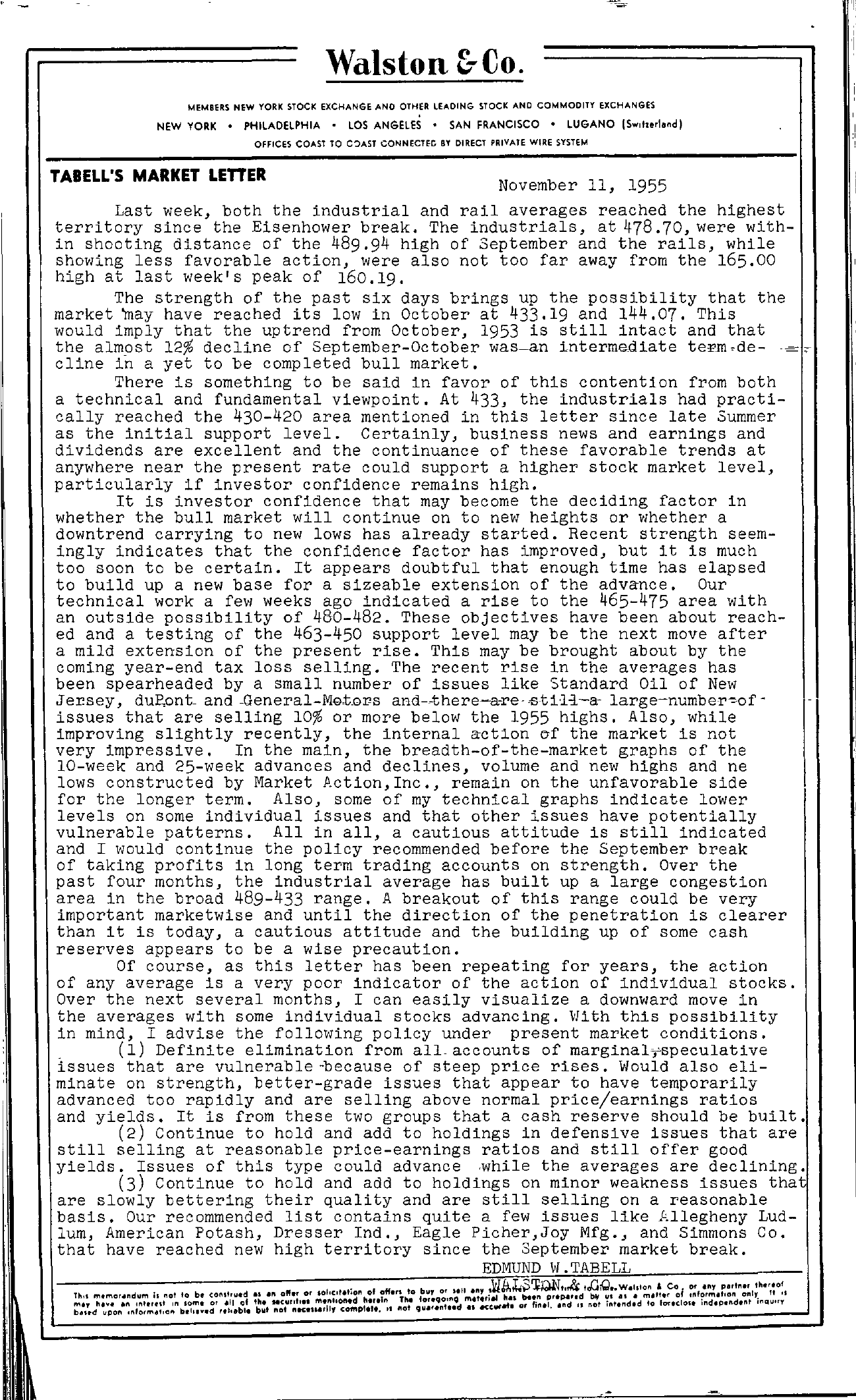 — Walston &eo. MEMBERS NEW YORK STOCK EXCHANGE AND OTHER LEADING STOCK AND COMMODITY EXCHANGES NEW YORK PHILADELPHIA LOS ANGELES SAN FRANCISCO LUGANO ISw,h.d) OFFICES COAST TO C'JAST CONNECHC BY DIRECT PRIVATE WIRE SYSTEM TABELL'S MARKET LETTER November 11, 1955 Last week, both the industrial and rail averages reached the highest territory since the Eisenhower break. The industrials, at 478.70, were with- in shooting distance of the 489.94 high of September and the rails, while showing less favorable action, were also not too far away from the 165.00 high at last week's peak of 160.19. The strength of the past six days brings up the possibility that the market may have reached its low in October at 433.19 and 144.07. This would imply that the uptrend from October, 1953 is still intact and that the almost 12 decline of September-October was-an term,de- , cline in a yet to be completed bull market. There is something to be said in favor of this contention from both a technical and fundamental viewpoint. At 433, the industrials had practically reached the 430-420 area mentioned in this letter since late Summer as the initial support level. Certainly, business news and earnings and dividends are excellent and the continuance of these favorable trends at anywhere near the present rate could support a higher stock market level, particularly if investor confidence remains high. It is investor confidence that may become the deciding factor in whether the bull market will continue on to new heights or whether a downtrend carrying to new lows has already started. Recent strength seem- ingly indicates that the confidence factor has improved, but it is much too soon to be certain. It appears doubtful that enough time has elapsed to build up a new base for a sizeable extension of the advance. Our technical work a few weeks ago indicated a rise to the 465-475 area with an outside possibility of 480-482. These objectives have been about reached and a testing of the 463-450 support level may be the next move after a mild extension of the present rise. This may be brought about by the coming year-end tax loss selling. The recent rise in the averages has been spearheaded by a small number of issues like Standard Oil of New Jersey, duP,ont- and -Qeneral-MGtDI's anG–there-a-re–sti'B.-a- large-number''of- issues that are selling 10 or more below the 1955 highs. Also, while improving slightly recently, the internal action of the market is not very impressive. In the main, the breadth-of-the-market graphs of the 10-week and 25-week advances and declines, volume and new highs and ne lows constructed by Market Action,Inc., remain on the unfavorable side for the longer term. Also, some of my technical graphs indicate lower levels on some individual issues and that other issues have potentially vulnerable patterns. All in all, a cautious attitude is still indicated and I would continue the policy recommended before the September break of taking profits in long term trading accounts on strength. Over the past four months, the industrial average has built up a large congestion area in the broad 489-433 range. A breakout of this range could be very important marketwise and until the direction of the penetration is clearer than it is today, a cautious attitude and the building up of some cash reserves appears to be a wise precaution. Of course, as this letter has been repeating for years, the action of any average is a very poor indicator of the action of individual stocks. Over the next several months, I can easily visualize a downward move in the averages with some individual stocks advancing. lith this possibility in mind, I advise the following policy under present market conditions. (1) Definite elimination from all accounts of marginalyspeculative issues that are of steep price rises. Would also eli- minate on strength, better-grade issues that appear to have temporarily advanced too rapidly and are selling above normal price/earnings ratios and yields. It is from these two groups that a cash reserve should be built. (2) Continue to hold and add to holdings in defensive issues that are still selling at reasonable price-earnings ratios and still offer good yields. Issues of this type could advance ,while the averages are declining. (3) Continue to hold and add to holdings on minor weakness issues that are slowly bettering their quality and are still selling on a reasonable basis. Our recommended list contains quite a few issues like Allegheny Ludlum, American Potash, Dresser Ind., Eagle Picher,Joy Mfg., and Simmons Co. that have reached new high territory since the September market break. EDMUND W.TABELL ,I