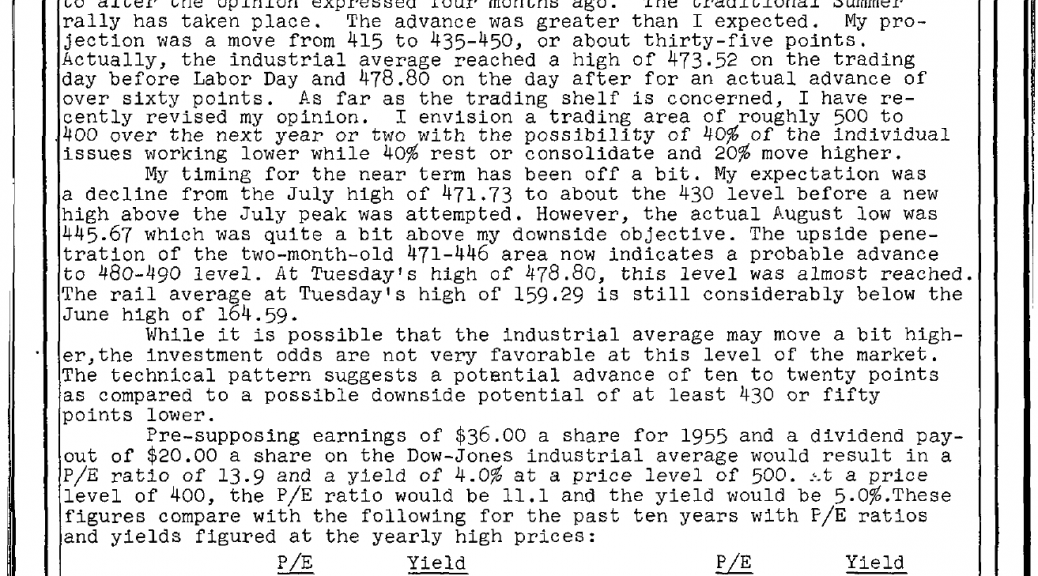 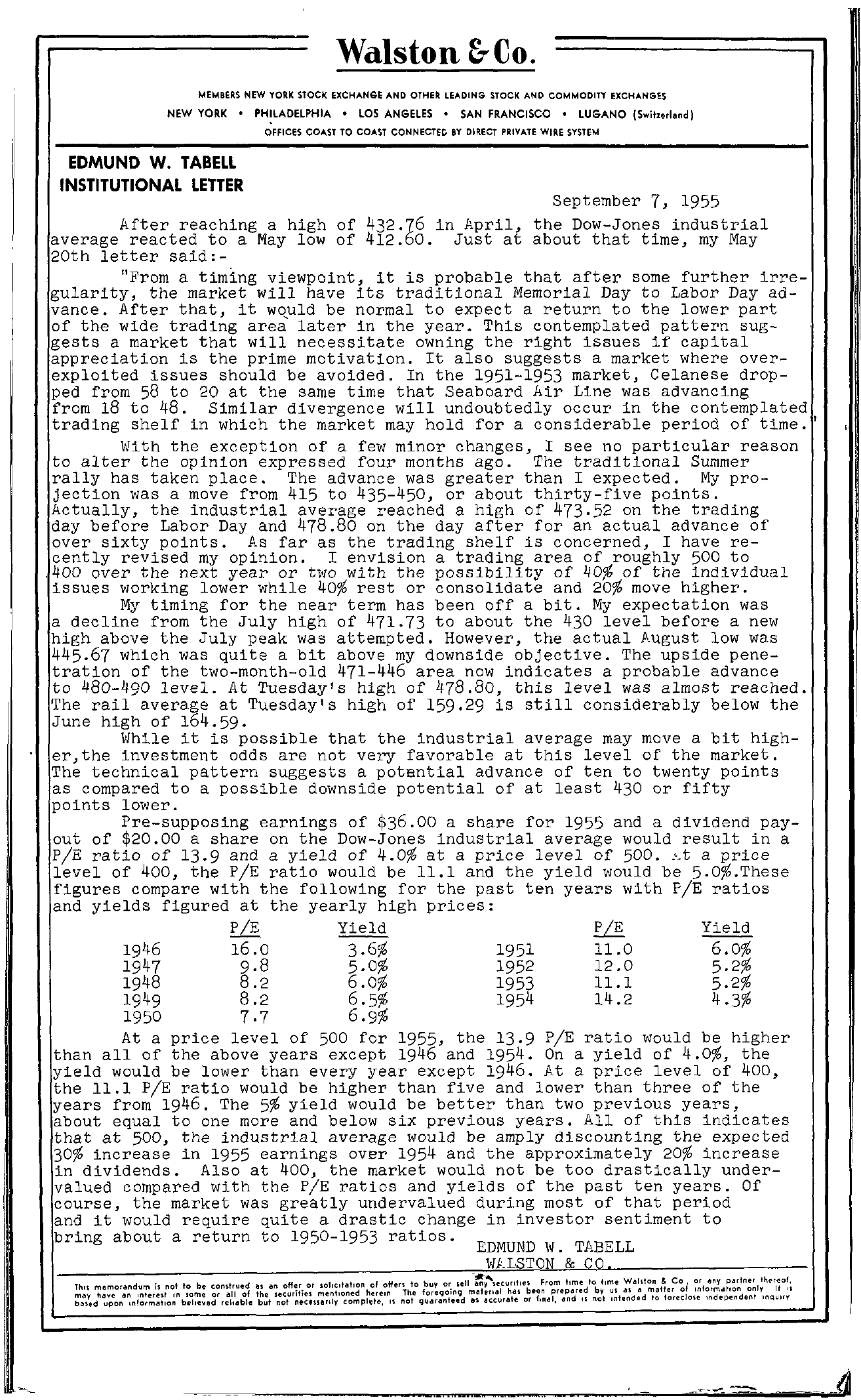 Walston &Co. MEMBERS NEW YORK STOCk EXCHANGE AND OTHER LEADING STOCK AND COMMODITY EXCHANGES NEW YORK PH!LADELPHIA LOS ANGELES SAN FRANCISCO LUGANO (Sw;',,d I OFFICES COA.ST TO COAST CONHECTEC BY DIRECT PRIVATE WIRE SYSTEM EDMUND W. TABELL INSTITUTIONAL LETTER September 7, 1955 After reaching a high of 432.76 in April, the Dow-Jones industrial average reacted to a May low of 412.60. Just at about that time, my May 20th letter said- From a timing viewpoint, it is probable that after some further irre- gularity, the market will have its traditional Memorial Day to Labor Day ad- vance. After that, it be normal to expect a return to the lower part of the wide trading area later in the year. This contemplated pattern sug- gests a market that will necessitate owning the right issues if capital appreciation is the prime motivation. It also suggests a market where over- exploited issues should be avoided. In the 1951-1953 market, Celanese drop- ped from 58 to 20 at the same time that Seaboard Air Line was advancing from 18 to 48. Similar divergence will undoubtedly occur in the contemplated trading shelf in which the market may hold for a considerable period of time. ' With the exception of a few minor changes, I see no particular reason to alter the opinion expressed four months ago. The traditional Summer rally has taken place. The advance was greater than I expected. My projection was a move from 415 to 435-450, or about thirty-five points. Actually, the industrial average reached a high of 473.52 on the trading day before Labor Day and 478.80 on the day after for an actual advance of over sixty points. As far as the trading shelf is concerned, I have recently revised my opinion. I envision a trading area of roughly 500 to .400 over the next year or two with the possibility of 40 of the individual issues working lower while 40 rest or consolidate and 20 move higher. My timing for the near term has been off a bit. My expectation was a decline from the July high of 471.73 to about the 430 level before a new high above the July peak was attempted. However, the actual August low was 445.67 which was quite a bit above my downside objective. The upside penetration of the two-month-old 471-446 area now indicates a probable advance to 480-490 level. At Tuesday's high of 478.80, this level was almost reached. The rail average at Tuesday's high of 159.29 is still considerably below the June high of 164.59. \!Ihile it is possible that the industrial average may move a bit higher,the investment odds are not very favorable at this level of the market. The technical pattern suggests a potential advance of ten to twenty pOints as compared to a possible downside potential of at least 430 or fifty pOints lower. Pre-supposing earnings of 36.00 a share for 1955 and a dividend payout of 20.00 a share on the Dow-Jones industrial average would result in a PiE ratio of 13.9 and a yield of 4.0 at a price level of 500 . .'.t a price level of 400, the piE ratio would be 11.1 and the yield would be 5.0.These figures compare with the following for the past ten years with piE ratios and yields figured at the yearly high prices PiE Yield Yield 1946 1947 1948 1949 1950 16.0 9.8 8.2 8.2 7.7 3.6 5.0 6.0 6.5 6.9 1951 1952 1953 1954 11.0 12.0 11.1 14.2 6.0 5.2 5.2 4.3 At a price level of 500 for 1955, the 13.9 PIE ratio would be higher than all of the above years except 1946 and 1954. On a yield of 4.0, the yield would be lower than every year except 1946. At a price level of 400, the 11.1 PIE ratio would be higher than five and lower than three of the years from 1946. The 5 yield would be better than two previous years, about equal to one more and below six previous years. All of this indicates that at 500, the industrial average would be amply discounting the expected 30 increase in 1955 earnings over 1954 and the approximately 20 increase in dividends. Also at 400, the market would not be too drastically undervalued compared with the PIE ratios and yields of the past ten years. Of course, the market was greatly undervalued during most of that period and it would require quite a drastic change in investor sentiment to bring about a return to 1950-1953 ratios. EDMUND W. TABELL vH.LSTON & CO.