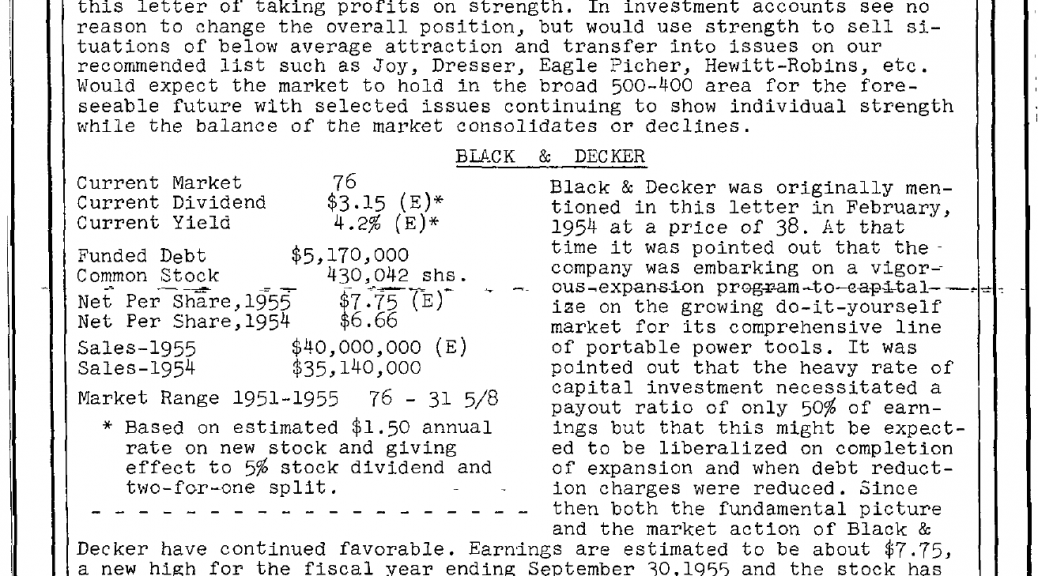 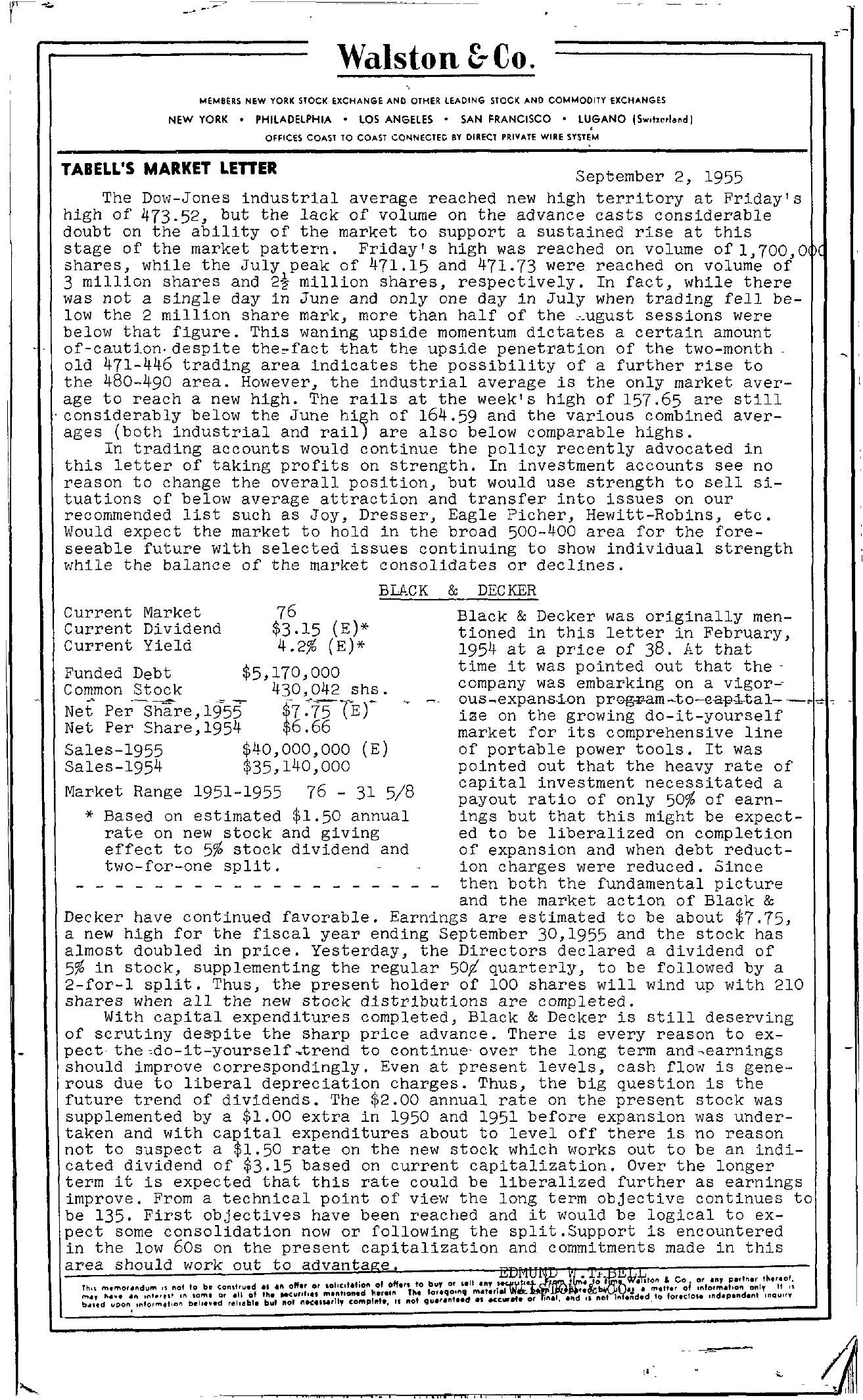 Walston &- Co. MEMBERS NEW YORK STOCK EXCHANGE AND OTHER LEADING STOCK AND COMMODITY EXCHANGES NEW YORK PHILADELPHIA LOS ANGELES SAN FRANCISCO LU,GANO (Sw,Idl OFFICES COAST TO COAST BY DIRECT PRIVATE WIRE SYSTEM TABEll'S MARKET LEnER September 2, 1955 The Dow-Jones industrial average reached new high territory at Friday'S high of 473.52, but the lack of volume on the advance casts considerable doubt on the ability of the market to support a sustained rise at this stage of the market pattern. Friday's high was reached on volume ofl,700,OD( shares, while the July peak of 471.15 and 471.73 were reached on volume of 3 million shares and 2t million shares, respectively. In fact, while there was not a single day in June and only one day in July when trading fell be- low the 2 million share mark, more than half of the -ugust sessions were below that figure. This waning upside momentum dictates a certain amount of-caution despite that the upside penetration of the two-month old 471-446 trading area indicates the posSibility of a further rise to the 480-490 area. However, the industrial average is the only market aver- age to reach a new high. The rails at the week's high of 157.65 are still . considerably below the June of 164.59 and the various combined aver- ages (both industrial and rail) are also below comparable highs. In trading accounts would continue the policy recently advocated in this letter of taking profits on strength. In investment accounts see no reason to change the overall pOSition, but would use strength to sell si- tuations of below average attraction and transfer into issues on our recommended list such as Joy, Dresser, Eagle Picher, Hewitt-Robins, etc. Would expect the market to hold in the broad 500-400 area for the fore- seeable future with selected issues continuing to show individual strength while the balance of the market consolidates or declines. & DECKER Current Market Current Dividend Current Yield 76 3.15 (E) 4.2 (E) Black & Decker was originally men- tioned in this letter in February, 1954 at a price of 38. At that Funded Debt Common stock 5,170,000 430,042 shs. Net' PerShare, 1',f55 7 (Ef Net Per Share,1954 6.66 — time it was pOinted out that the – company was embarking on a vigor– ousexpans-ion – , ize on the growing do-it-yourself market for its comprehensive line Sales-1955 40,000,000 (E) of portable power tools. It was Sales-1954 35,140,000 pointed out that the heavy rate of Market Range 1951-1955 76 – 31 5/8 capital investment necessitated a payout ratio of only 50 of earn- Based on estimated 1.50 annual ings but that this might be expect- rate on new stock and giving ed to be liberalized on completion effect to 5 stock dividend and of expansion and when debt reduct- two-far-one split. – ion charges were reduced. Since – – – – – – – – – – then both the fundamental picture and the market action of Black & Decker have continued favorable. Earnings are estimated to be about 7.75, a new high for the fiscal year ending September 30,1955 and the stock has almost doubled in price. Yesterday, the Directors declared a dividend of 5 in stock, supplementing the regular 501 quarterly, to be followed by a 2-for-l split. Thus, the present holder of 100 shares will wind up with 210 shares when all the new stock distributions are completed. With capital expenditures completed, Black & Decker is still deserving of scrutiny deepite the sharp price advance. There is every reason to ex- pecttheodo-it-yourselftrend to continue over the long term should improve correspondingly. Even at present levels, cash flow is gene- rous due to liberal depreciation charges. Thus, the big question is the future trend of dividends. The 2.00 annual rate on the present stock was supplemented by a 1.00 extra in 1950 and 1951 before expansion was under- taken and with capital expenditures about to level off there is no reason not to suspect a 1.50 rate on the new stock which works out to be an indi- cated dividend of 3.15 based on current capitalization. Over the longer term it is expected that this rate could be liberalized further as earnings improve. From a technical point of view the long term objective continues to be 135. First objectives have been reached and it would be logical to ex- pect some consolidation now or following the split.Support is encountered in the low 60s on the present capitalization and commitments made in this area should work out to advantage. ,ai I I ,t,