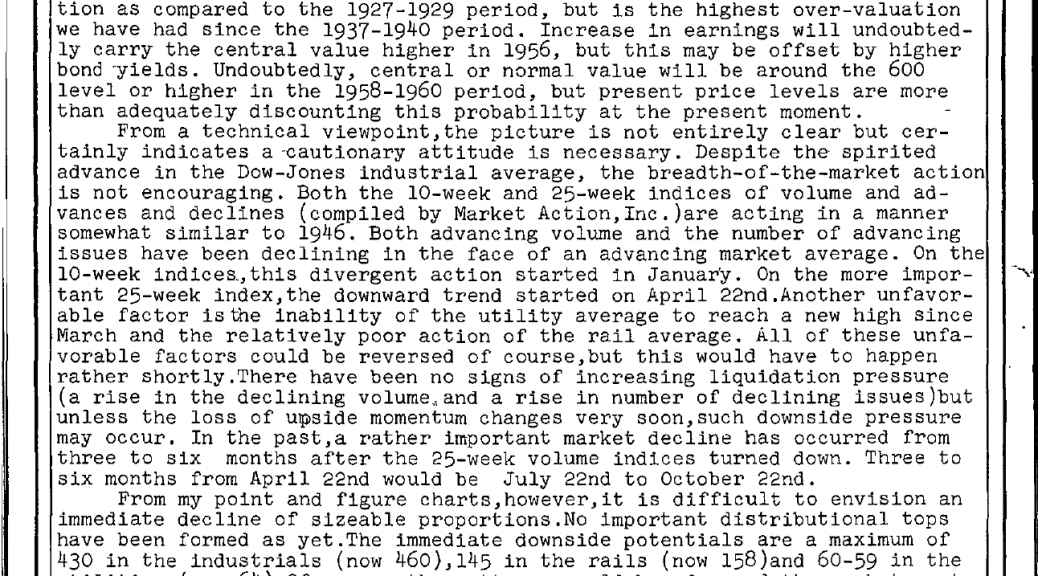 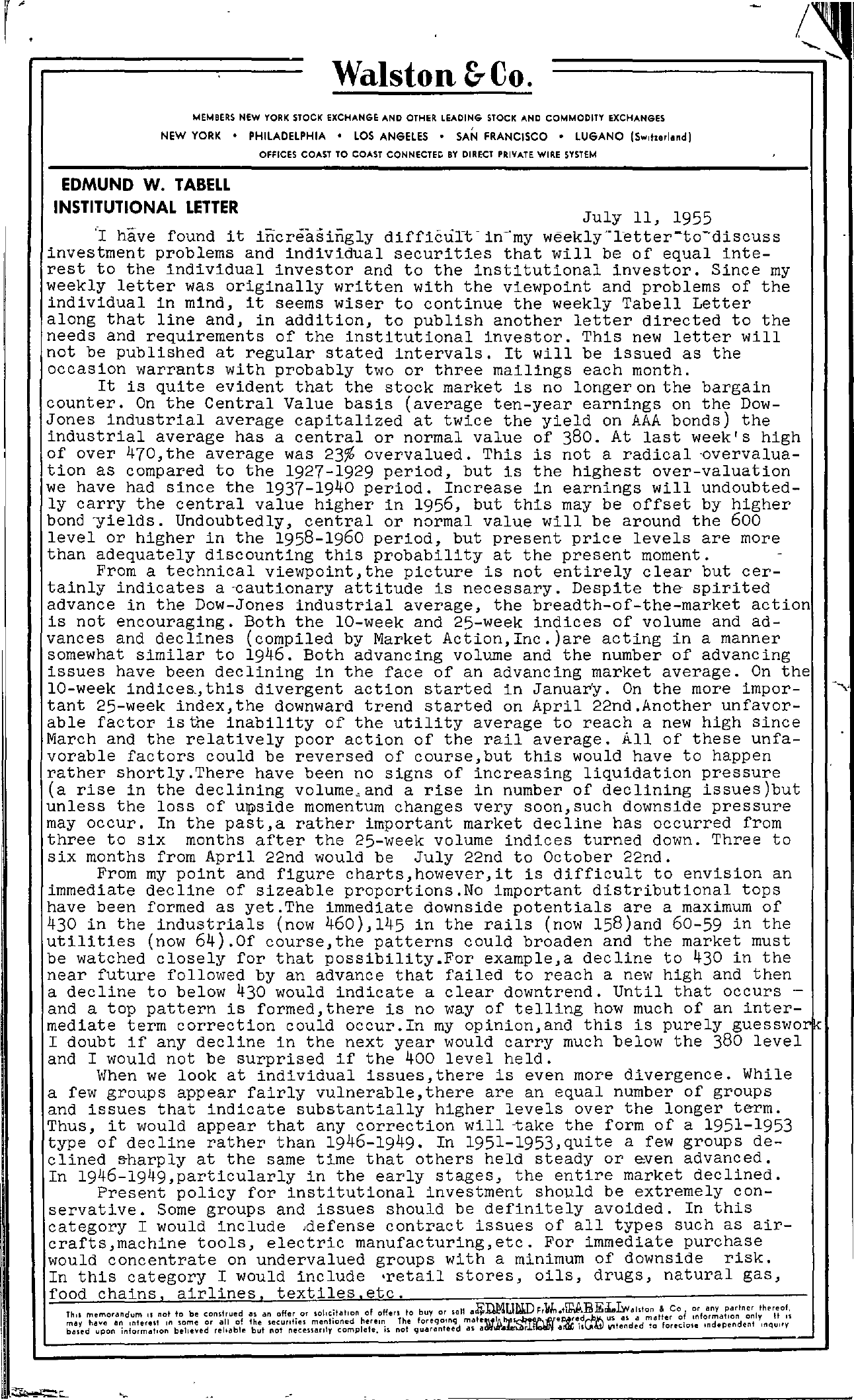 Walston &Co. MEMBERS NEW YORK STOCK EXCHANGE AND OTHER LEADING STOCK AND COMMODITY EXCHANGES NEW YORK PHILADELPHIA LOS ANGELES SAN FRANCISCO LUGANO (Sw,h.do,d) OFFICES COAST TO COAST BY DIRECT PRIVATE WIRE SYSTEM EDMUND W. TABELL INSTITUTIONAL LETTER July 11, 1955 'I have found it increasingly difficuTt- in-my weeklyletter-to-discuss investment problems and individual securities that will be of equal inte- rest to the individual investor and to the institutional investor. Since my weekly letter was originally written with the viewpoint and problems of the individual in mind, it seems wiser to continue the weekly Tabell Letter along that line and, in addition, to publish another letter directed to the needs and requirements of the institutional investor. This new letter will not be published at regular stated intervals. It will be issued as the occasion warrants with probably two or three mailings each month. It is quite evident that the stock market is no longer on the bargain counter. On the Central Value basis (average ten-year earnings on the Dow- Jones industrial average capitalized at twice the yield on AAA bonds) the industrial average has a central or normal value of 380. At last week's high of over 470,the average was 23 overvalued. This is not a radical 'overvalua- tion as compared to the 1927-1929 period, but is the highest over-valuation we have had since the 1937-1940 period. Increase in earnings will undoubted- ly carry the central value higher in 1956, but this may be offset by higher bond Undoubtedly, central or normal value will be around the 600 level or higher in the 1958-1960 period, but present price levels are more than adequately discounting this probability at the present moment. – From a technical viewpoint,the picture is not entirely clear but cer- tainly indicates a -cautionary attitude is necessary. Despite the spirited advance in the Dow-Jones industrial average, the breadth-of-the-market action is not encouraging. Both the 10-week and 25-week indices of volume and ad- vances and declines (compiled by Market Action,Inc.)are acting in a manner somewhat similar to 1946. Both advancing volume and the number of advancing issues have been declining in the face of an advancing market average. On the 10-week indices this divergent action started in Januar'y. On the more impor- tant 25-week index,the downward trend started on April 22nd.Another unfavor- able factor isthe inability of the utility average to reach a new high since March and the relatively poor action of the rail average. All of these unfa- vorable factors could be reversed of course,but this would have to happen rather shortly.There have been no signs of increasing liquidation pressure (a rise in the declining volumeand a rise in number of declining issues)but unless the loss of momentum changes very soon,such downside pressure may occur. In the past,a rather important market decline has occurred from three to six months after the 25-week volume indices turned down. Three to six months from April 22nd would be July 22nd to October 22nd. From my point and figure charts,however,it is difficult to envision an immediate decline of sizeable proportions.No important distributional tops have been formed as yet.The immediate downside potentials are a maximum of 430 in the industrials (now 460),145 in the rails (now 158)and 60-59 in the utilities (now 64).Of course,the patterns could broaden and the market must be watched closely for that possibility.For example,a decline to 430 in the near future followed by an advance that failed to reach a new high and then a decline to below 430 would indicate a clear downtrend. Until that occurs .- and a top pattern is formed,there is no way of telling how much of an inter- mediate term correction could occur.In my opinion,and this is purely guesswor I doubt if any decline in the next year would carry much below the 380 level and I would not be surprised if the 400 level held. When we look at individual issues,there is even more divergence. While a few groups appear fairly vulnerable,there are an equal number of groups and issues that indicate substantially higher levels over the longer term. Thus, it would appear that any correction will take the form of a 1951-1953 type of decline rather than 1946-1949. In 1951-1953,quite a few groups de- clined frharply at the same time that others held steady or aven advanced. In 1946-1949,particularly in the early stages, the entire market declined. Present policy for institutional investment should be extremely con- servative. Some groups and issues should be definitely avoided. In this category I would include ,defense contract issues of all types such as air- crafts,machine tools, electric manufacturing,etc. For immediate purchase would concentrate on undervalued groups with a minimum of downside risk. In this category I would include retail stores, oils, drugs, natural gas, food chains, airlines, textiles,etc, . I 'RDMUMDTh,s memo,,,ndum II not to be construed as an oHer. or sollC!tailon 0 oHeri to buy or 11 HI ad.' Frlib,; mbuayedhauvpeonaniniIQntremrellst'tQn,n bseolmieve edor reallllabotfe tbhuet sneocturnde,ceelulmlrelltlyl.ocnoemdplheetree,inis nTohte gfUolrlerlglonitneegd 115 red,..b; uS as iii & Coof or any part .nformdtIOt'1 noenr lytherIeIo f, 11 Liltllfltended to foredos!! Independent ,nqulfY