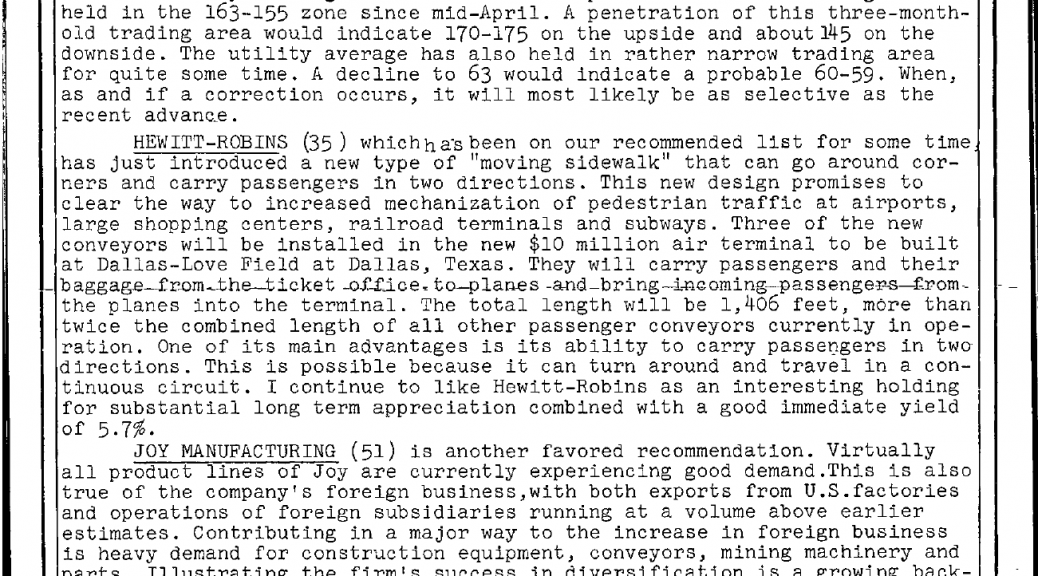 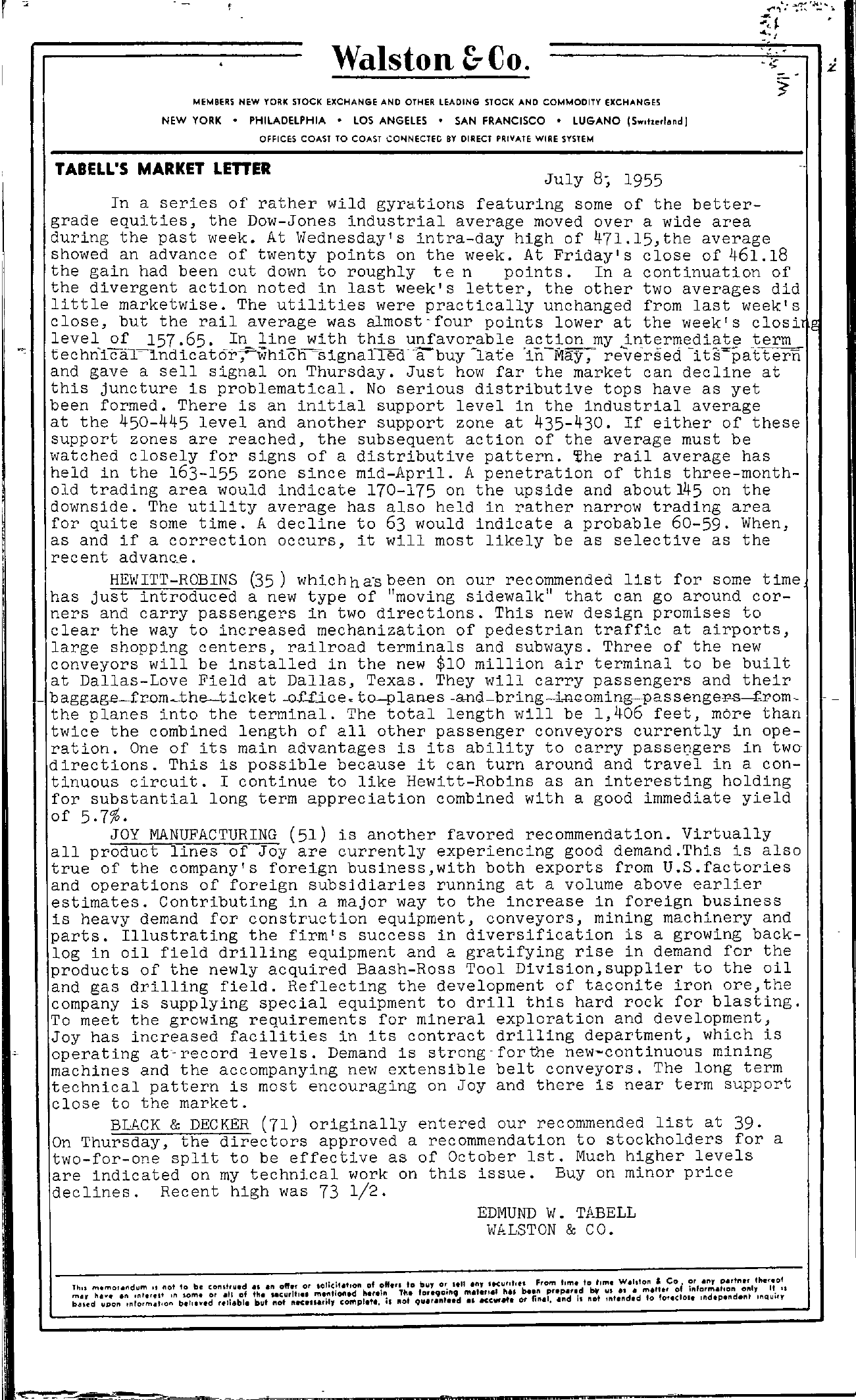 f Walston &- Co. MEMBERS NEW YORK STOCK EXCHANGE ANO OTHER LEADING STOCK AND COMMODITY eXCHANGES NEW YORK PHILADELPHIA LOS ANGELES SAN FRANCISCO LUGANO ISw,'wldJ OFFICES COAST TO COAST COt.4NECTfC BY DIRECT PRIVATE WIRE SYSlEt.4 TABELL'S MARKET LETTER July 1955 In a series of rather wild featuring some of the better- grade equities, the Dow-Jones industrial average moved over a wide area during the past week. At Wednesday's intra-day high of 471.15,the average showed an advance of twenty points on the week. At Friday's close of 461.18 the gain had been cut down to roughly te n points. In a continuation of the divergent action noted in last week's letter, the other two averages did little marketwise. The utilities were practically unchanged from last week's close, but the rail average was almost-four points lower at the week's closirf level of 157.65. In line with this unfavorable action my intermediate term -s1gnallea–abuy -late '1n-May— reve-dect -1tspa-ttern and gave a sell signal on Thursday. Just how far the market can decline at this juncture 1s problematical. No serious distributive tops have as yet been formed. There is an initial support level in the industrial average at the 450-445 level and another support zone at 435-430. If either of these support zones are reached, the subsequent action of the average must be watched closely for signs of a distributive pattern. rail average has held in the 163-155 zone Since mid-April. A penetration of this three-month- old trading area would indicate 170-175 on the upside and about 145 on the downside. The utility average has also held in rather narrow trading area for quite some time. A decline to 63 would indicate a probable 60-59. When, as and if a correction occurs, it will most likely be as selective as the recent advance. HEWITT-ROBINS (35) whichha-s been on our recommended list for some time has just introduced a new type of moving sidewalk that can go around corners and carry passengers in two directions. This new design promises to clear the way to increased mechanization of pedestrian traffic at airports, large shopping centers, railroad terminals and subways. Three of the new conveyors will be installed in the new 10 million air terminal to be built at Dallas-Love Field at Dallas, Texas. They will carry passengers and their baggag. -fromthe-ticket -oJ'..Lice. to-plan.es -ano-bring-ilcoming-passengeJ-s-fromthe planes into the terminal. The total length will be 1,406 feet, more than twice the combined length of all other passenger conveyors currently in operation. One of its main advantages is its ability to carry passengers in two directions. This is possible because it can turn around and travel in a continuous circuit. I continue to like Hewitt-Robins as an interesting holding for substantial long term appreciation combined with a good immediate yield of 5.7. JOY MANUFACTURING (51) is another favored recommendation. Virtually all product lines of Joy are currently experiencing good demand.This is also true of the company's foreign business,with both exports from U.S.factories and operations of foreign subsidiaries running at a volume above earlier estimates. Contributing in a major way to the increase in foreign business is heavy demand for construction equipment, conveyors, mining machinery and parts. Illustrating the firm's success in diversification is a growing backlog in oil field drilling equipment and a gratifying rise in demand for the products of the newly acquired Baash-Ross Tool Division,supplier to the oil and gas drilling field. Reflecting the development of taconite iron ore, the company is supplying special equipment to drill this hard rock for blasting. To meet the growing requirements for mineral exploration and development, Joy has increased facilities in its contract drilling department, which is operating at– record levels. Demand is strong – for the new-continuous mining machines and the accompanying new extensible belt conveyors. The long term technical pattern is most encouraging on Joy and there is near term support close to the market. BLACK & DECKER (71) originally entered our recommended list at 39. On Thursday, the directors approved a recommendation to stockholders for a two-for-one split to be effective as of October 1st. Much higher levels are indicated on my technical work on this issue. Buy on minor price declines. Recent high was 73 1/2. EDMUND W. TABELL WALSTON & CO. – —