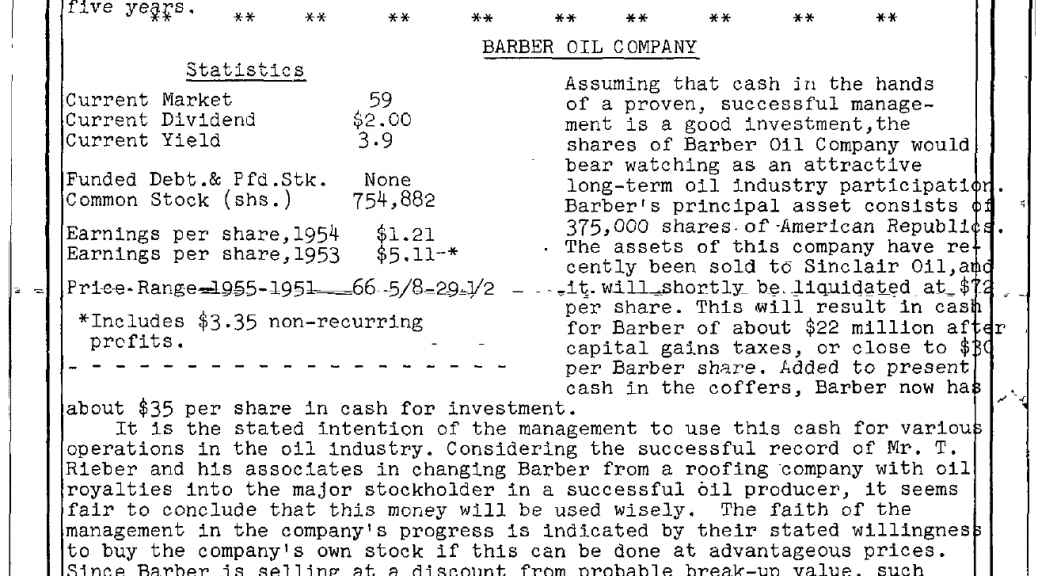 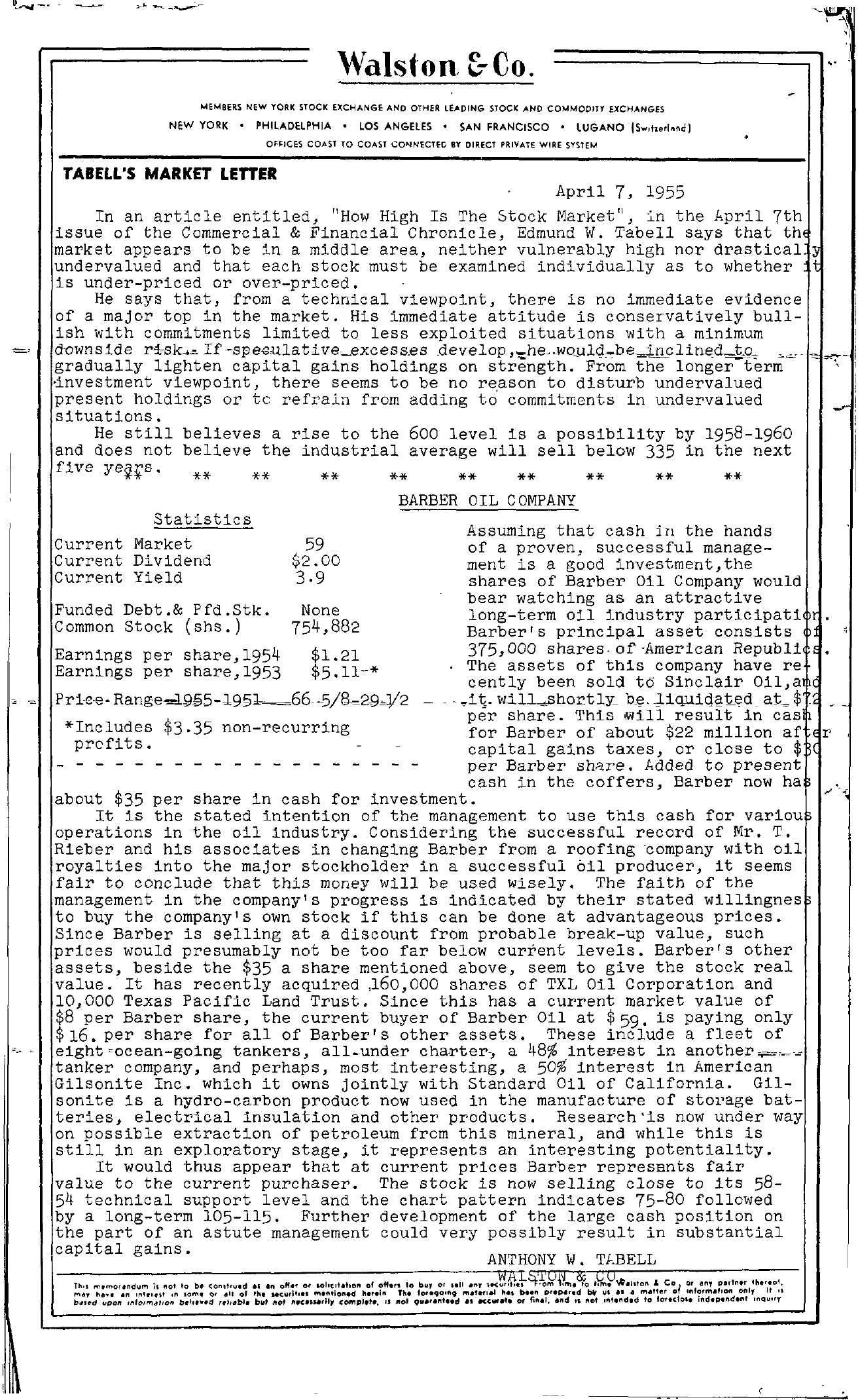 '1 Walston &Co. ;-. ''I MEMBERS NEW YORK STOCK EXCHANGE AND OTHER LEADING STOCK AND COMMODITY EXCHANGES NEW YORK PHILADELPHIA LOS ANGELES SAN FRANCISCO LUGANO ISw,,,..I,d) OHleES COAST TO COAST COlNECTfC BY DIRECT PRIVATE WIRE SYSTEM TABELL'S MARKET LETTER April 7, 1955 In an artic Ie entitled, How High Is The Stock Market, en the J..pril 7th issue of the Commercial & Financial Chronicle, Edmund W. Tabell says that th market appears to be in a middle area, neither vulnerably high nor drastical undervalued and that each stock must be examined individually as to whether is under-priced or over-priced. He says that, from a technical Viewpoint, there is no immediate evidence of a major top in the market. His immediate attitude is conservatively bull- ish with commitments limited to less exploited situations with a minimum d)wnside ri-sk-. gradually lighten capital gains holdings on strength. Fr'om the longerterm- viewpoint, there seems to be no reason to disturb undervalued present holdings or te refra.Ln from adding to' commitments in undervalued situations. He still believes a rise to the 600 level is a possibility by 1958-1960 and does not believe the industrial average will sell below 335 in the next five yens. BARBER OIL COMPANY Statistics Current Market Current DiVidend Current Yield 59 2.00 3.9 Assuming that cash in the hands of a proven, successful management is a good investment,the shares of Barber Oil Company would Funded Debt.& Pfd.Stk. None Common Stock (shS.) 754,882 bear watching as an attractive long-term oil industry participati)r. Barber's principal asset consists 11 Earnings per share,1954 1.21 Earnings per share,1953 5.11- 375,000 shares, of-American RepubliE. The assets of this company have re cently been sold to Sinclair Oil,a Price Includes 3.35 non-recurring profits. – – – t;. will..,.shoI't ly t.ed . per share. This Mill result 'in cas for Barber of about 22 million af r capital gains taxes, or close to per Barber Added to present cash in the coffers, Barber now ha / about 35 per share in cash for investment. It is the stated intention of the management to use this cash for operations in the oil industry. Considering the successful record of Mr. T. Rieber and his associates in changing Barber from a roofing 'company with oil royalties into the major stockholder in a successful oil producer, it seems fair to conclude that this money will be used wisely. The faith of the management in the company's progress is indicated by their stated willingnes to buy the company's own stock if this can be done at advantageous prices. Since Barber is selling at a discount from probable break-up value, such prices would presumably not be too far below current levels. Barber's other assets, beside the 35 a share mentioned above, seem to give the stock real value. It has recently acquired ,160,000 shares of TXL Oil Corporation and 10,000 Texas Pacific Land Trust. Since this has a current market value of 8 per Barber share, the current buyer of Barber Oil at 59. is paying only 16. per share for all of Barber's other assets. These include a fleet of eight cocean-going tankers, all-under charter-, a 48 intel'est in tanker company, and perhaps, most interesting, a 50 interest in American Gilsonite Inc. which it owns jointly with Standard Oil of California. Gil- sonite is a hydro-carbon product now used in the manufacture of storage bat- teries, electrical insulation and other products. Research'is now under way on possible extraction of petroleum frem this mineral, and while this is still in an exploratory stage, it represents an interesting potentiality. It would thus appear that at current prices Barber represants fair value to the current purchaser. The stock is now selling close to its 58- 54 technical support level and the chart pattern indicates 75-80 followed by a long-term 105-115. Further development of the large cash position on the part of an astute management could very possibly result in substantial capital gains. ANTHONY 'II. Ti-.BELL —,,-m-,m-'–'d-om-;,-,,-.–'-'–'-,-o'-d-..-.-.–.-,–.-.,,-,,.-.,-,,-,-.'-.-fl.-,,-.-.-.,-,-..-,-,,-, 8fo fIoI1 n ,n 10m, C). II 01 '1'1, NClld ntlon.d .t.h. , …. 100;10'''9 ,.tlflal I'll' beln P,p.,d IIPO ,,,Ic,,,,.,,,,,o,, b.f,…..o ),,,11. b,,' 0' IIK.n4I,1I1I compl.t., IS 1I0f Qvet',d e. eccwet. or finel, nd , Co, or any partn.r Ih.r.oJ, \I' III ,.It'H of In',mlfIOn only It Ii ,nnd,d to IOf,do Ind,p,nd,n' ,nQuifY