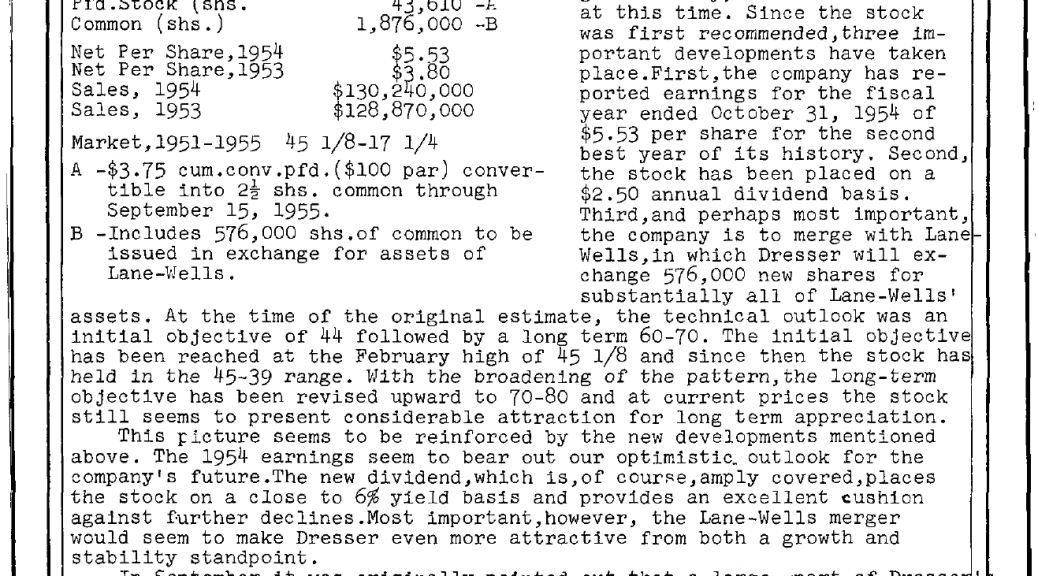 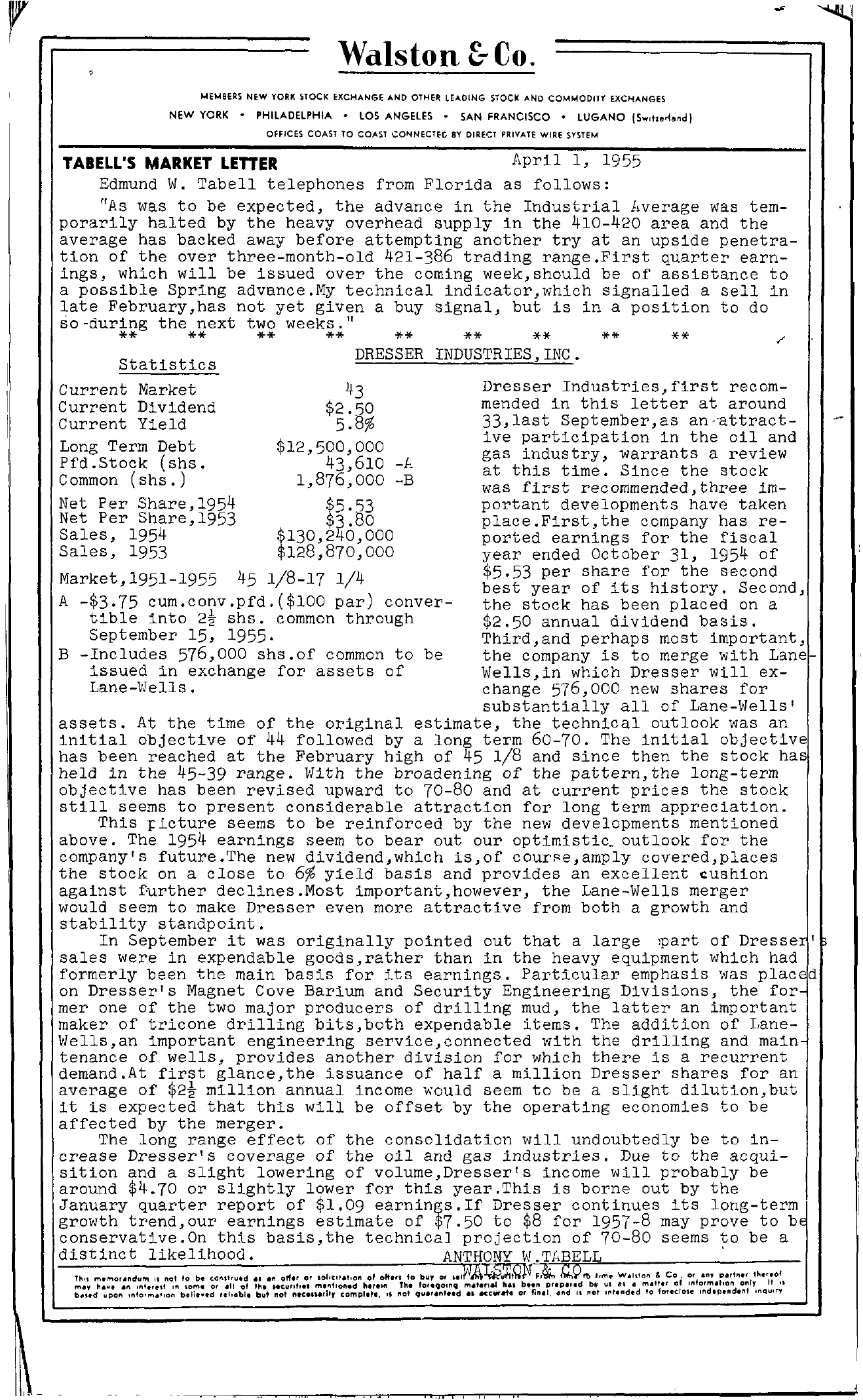 r , Walston &- Co. 'EMBERS NEW YORK STOCK EXCHANGE AND OTHEF! LEADING STOCI( AND COMt.4QDnY EXCHANGES NEW YORK PHILADELPHIA LOS ANGELES SAN FRANCISCO LUGANO (Sw,'mld) OFFICES COAST TO COAST COlNECT.C, BY OIRECT PRIVATE WIRE SYSTEM TABELL'S MARKET LETTER April 1, 1955 Edmund W. Tabell telephones from Florida as follows As was to be expected, the advance in the Industrial i-verage was tem- porarily halted by the heavy overhead supply in the 410-420 area and the average has backed away before attempting another try at an upside penetra- tion of the over three-month-old 421-386 trading range.First quarter earn- ings, which will be issued over the coming week,should be of assistance to a possible Spring advance.My technical indicator,which signalled a sell in late February,has not yet given a buy signal, but is in a position to do so-during the next two weeks. Statistics DRESSER INDUSTRIES,INC. Current Market Current Dividend Current Yield Long Term Debt Pfd.Stock (shs. Common (shs.) 43 2.50 5.8 12,500,000 43,610 -h 1,876,000 -B Dresser Industries,first recommended in this letter at around 33,last September,as ive participation in the oil and gas industry, warrants a review at this time. Since the stock was first recommended,three im- Net Per Share,1954 5.53 portant developments have taken Net Per Share,1953 Sales, 1954 3.80 130,240,000 place.First,the company has reported earnings for the fiscal Sales, 1953 128,870,000 year ended October 31, 1954 of Market, 1951-1955 45 1/8-17 1/4 A -3.75 cum.conv.pfd.(lOO par) conver- 5.53 per share for the second best year of its history. Second, the stock has been placed on a tible into 2t shs. common through September 15, 1955. 2.50 annual dividend baSis. Third,and perhaps most important, B -Includes 576,000 shs.of common to be the company is to merge with Lane- issued in exchange for assets of Wells,in which Dresser will ex- Lane-VJells. change 576,000 new shares for substantially all of Lane-Wells' assets. At the time of the original estimate, the technical outlook was an initial objective of 44 followed by a long term 60-70. The initial objective has been reached at the February high of 45 1/8 and since then the stock has held in the 45-39 range. With the broadening of the pattern,the long-term objective has been revised upward to 70-80 and at current prices the stock still seems to present conSiderable attraction for long term appreciation. This seems to be reinforced by the new developments mentioned above. The 1954 earnings seem to bear out our optimistic outlook for the company's future.The new dividend,which is,of course,amply covered,places the stock on a close to 6 yield basis and provides an excellent cushion against further declines.Most important,however, the Lane-Wells merger would seem to make Dresser even more attractive from both a growth and stability standpoint. In September it was originally pointed out that a large 'part of Dresser' sales were in expendable goods,rather than in the heavy equipment which had formerly been the main basis for its earnings. Particular emphasis was plaCEd on Dresser's Magnet Cove Barium and Security Engineering Divisions, the for- mer one of the two major producers of drilling mud, the latter an important maker of tricone drilling bits,both expendable items. The addition of Lane- Wells,an important engineering service,connected with the drilling and main tenance of wellS, provides another division for which there is a recurrent demand.At first glance,the issuance of half a million Dresser shares for an average of 2t million annual income would seem to be a slight dilution,but it is expected that this will be offset by the operating economies to be affected by the merger. The long range effect of the consolidation will undoubtedly be to in- crease Dresser's coverage of the oil and gas industries. Due to the acqui- sition and a slight lowering of volume,Dresser's income will probably be around 4.70 or slightly lower for this year.This is borne out by the January quarter report of 1.09 Dresser continues its long-term growth trend,our earnings estimate of 7.50 to 8 for 1957-8 may prove to bE conservative.On this basis,the technicaJ projection of 70-80 seems to be a distinct likelihood. ANTHONY W.Th.BELL . ,, I